One of the most serious disorders of the life of the human body is hepatomegaly. Or, in simple terms, an increase in the liver. Symptoms and treatment of this phenomenon, as well as causes and prevention will be discussed in this article.

To begin, perhaps, it is worth with a small, but very important specification. Hepatomegaly itself is not a disease. That is, the enlargement of the liver, the symptoms and treatment of which are described below, is also a kind of symptom that can signal a variety of different diseases.

Hepatomegaly doctors call this state of the liver, when its anatomical dimensions are increased to some extent. If the lower edge of the organ protrudes by one centimeter, then it is appropriate to speak of a small degree of deviation, if two are moderate, and if three or more are expressed. 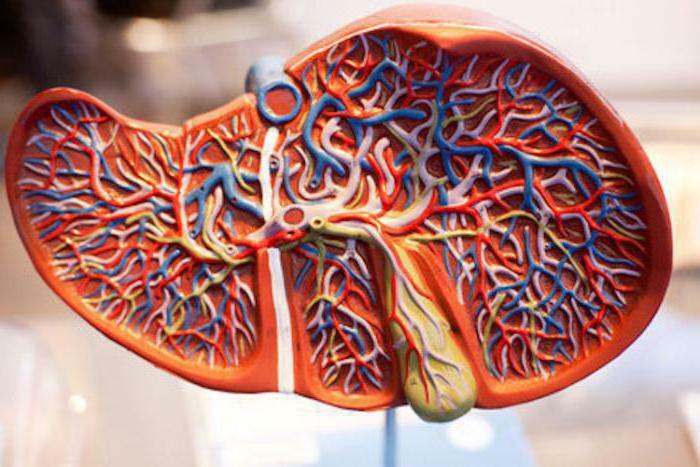 As is known, the structure of the liver suggests dividing it into left and right lobes. So, the pathology can affect either one or the other part. As a rule, it happens. Most often, an increase in the right lobe of the liver is diagnosed, although it does not have any special significance. Both types of localization may indicate completely identical diseases. However, sometimes it does happen that an increase in the left lobe of the liver signals problems with the pancreas, which almost immediately adjoins this organ on the left. If the gland is highly inflamed, and pancreatitis takes a particularly severe form, the liver may not be able to cope with the elimination of toxins. They accumulate in it, provoking an increase.

There is one more variety of the phenomenon under consideration. But on it it is necessary to stop separately.

Diffuse enlargement of the liver - what is it?

This pathology is characterized by death of glandular hepatic tissue and proliferation of fibrous tissue. There is no clear localization. The lobes of the liver, consisting of hepatocytes, deform in different places and change their size. As a result, veins are transmitted, the body becomes inflamed and swells. 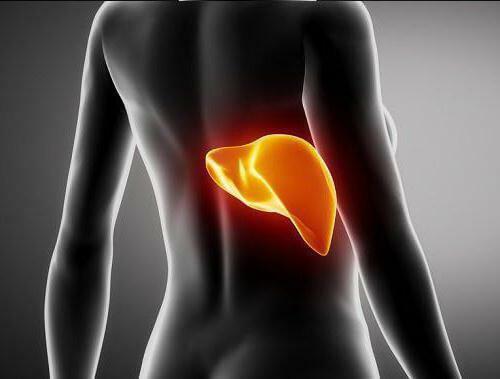 Such deviations are very dangerous. The liver gradually ceases to cope with its functions, and the body is impregnated with toxins, which can lead to its death. And the saddest thing is that the process is irreversible. It really only slows down, and even then - with great difficulty.

Most often, pathology becomes a consequence of alcoholic hepatitis, serious disorders of metabolic processes, as well as fatty degeneration.

But, of course, not only the listed reasons lead to an increase in the most important organ.

Liver shares( or one of them) can grow due to other abnormalities and diseases that can be conditionally divided into three groups.

The first of these include various hepatic ailments, such as: hepatitis of all kinds( including alcohol), echinococcosis, tuberculosis of the liver, cysts and tumors, pathologies of venous vessels, autoimmune lesion of liver cells, etc. 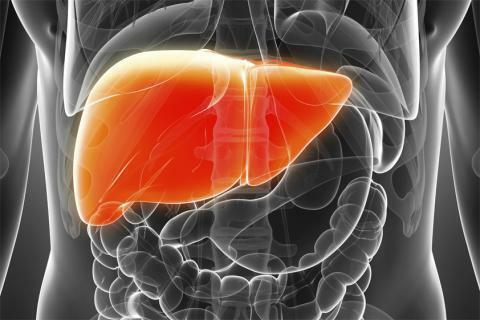 And in the third group - cardiovascular diseases: atrial fibrillation( permanent form), heart failure, hypertensive heart, various etymologies of heart disease, cardiosclerosis due to heart attacks, atherosclerosis, angina and others. The interrelation of cardiovascular diseases and liver problems may seem strange at first glance. But in fact, everything is logical: blood circulation is disturbed and leads to venous stasis in the liver. As a result, the body swells and changes its size in a larger direction.

Symptoms If a problem such as a liver enlargement has occurred, the symptoms and treatment should be considered in the most serious perspective, since often a deviation really threatens life.

In cases where the prescribed dimensions are exceeded slightly( by 1-2 cm), this violation may not manifest itself in any way. And this aggravates the situation, since at a more advanced stage the assistance is much more difficult.

Therefore it is necessary to be most attentive to yourself, and with the slightest ailments to contact the doctor. A signal for an enlarged liver can quickly fatigue and general weakness, heaviness in the stomach after eating, nausea, sudden weight loss, heartburn, chronic bad breath, swelling, rash, various bleeding( including uterine), diarrhea and constipation. The yellowed skin shows about hepatitis, and cirrhosis - an increase in the abdomen and pain in it, drowsiness during the day and insomnia at night, hair loss, bleeding gums, memory impairment. 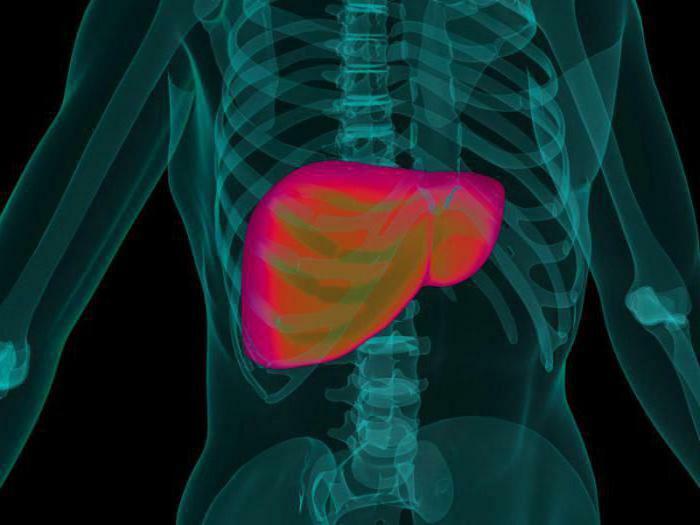 With the increase in the liver, alas, not only adults, but also children. Among the most common causes of such a sad phenomenon - tuberculosis, syphilis, congenital hepatitis, congenital aplastic anemia, abnormal states of the bile ducts, an increase in the blood of immunoglobulins, etc. The last of the listed pathologies is also congenital and is characterized by a delay in the development of the baby. A child with an enlarged liver does not eat well, his skin is pale.

In a modern, fast-paced "weight gaining" world, children are often overtaken by fatty hepatosis, which is a consequence of excess kilograms. It causes the increase in liver size in young patients hepatologist in about half of all cases.

How to diagnose an increase?

An experienced doctor can diagnose an enlarged liver with the help of the usual method of palpation. But only in those cases, if the size exceeds 3-6 cm. By the way, the structure of the liver suggests that the right side is larger than the left one - in an adult they are 12.5 and 7 cm, respectively. If the increase is small, then you can see it only on ultrasound.

This method will not only detect the deviation, but also help to understand the reasons. For example, the increase in lymph nodes in the liver, found during the study, may indicate cirrhosis, lymphogranulomatosis, HIV infection, malignant neoplasms, etc. 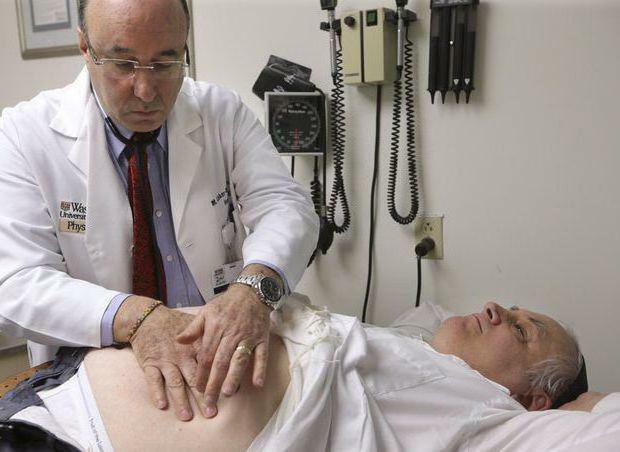 In addition to ultrasound, during the examination, doctors often appoint special blood and urine tests, X-rays, MRI or CT, as well as a biopsy for suspected oncology.

On the treatment of

As noted above, the enlargement of the liver, the symptoms and treatment of which are discussed in this article, is not a disease in itself. Therefore, in case of detection, it is important to identify the source and fight it.

From drugs for liver disease often prescribed drugs such as Gepabene, Essentiale, Essliver, Artichol, Interferon and many others( it all depends on the specific disease). 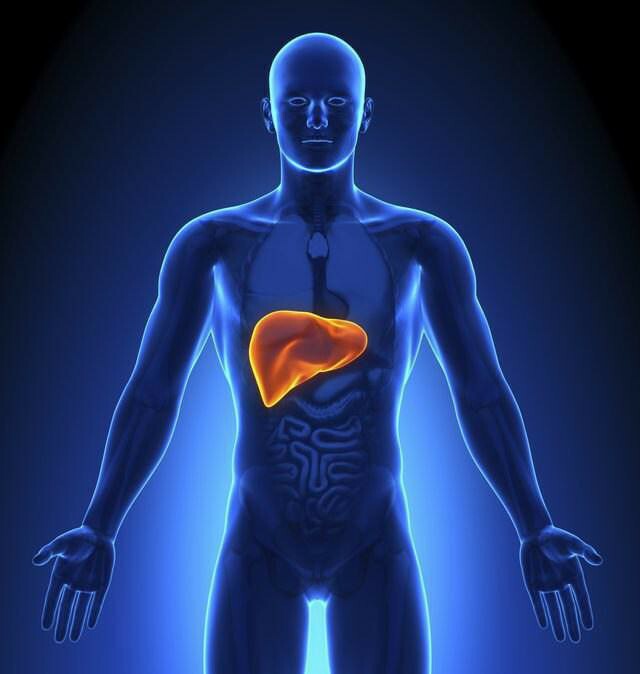 In particularly difficult cases( for oncology, cysts, etc.), the optimal treatment option is surgical intervention. In the fight against cancer today also often use vascular embolization, which stops the "supply" of blood to the affected area, and the tumor "dies of hunger".In some cases, liver transplantation may be required.

Naturally, complex therapy involves a proper diet and a rejection of bad habits, in particular, from alcohol. Fat, fried, hot, smoked, as well as legumes, sorrel, radish, radish, etc.should be taboo for a person suffering from liver disease. 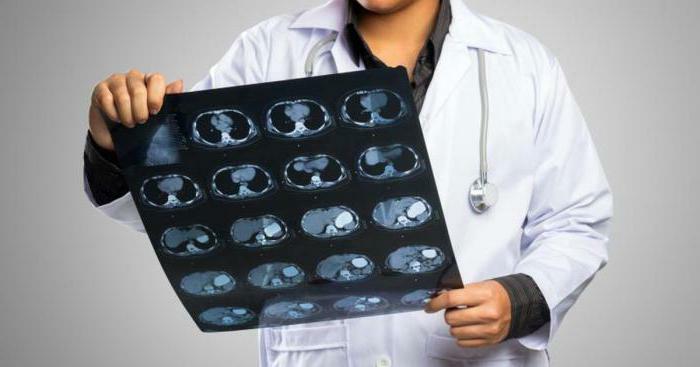 Unfortunately, preventing liver enlargement is really far from all cases. Of course, if it is a question of cirrhosis, alcoholic hepatitis or fatty hepatosis, then everything is simple - you need to try to keep the weight in the norm and not abuse alcohol. But nobody is immune from virus diseases.

Although in any case, a healthy lifestyle, personal hygiene and care for your body reduces the chances of earning a serious ailment at times. And it concerns not only the liver.