Trichophytosis - this is a fairly common disease, if it comes to depriving. For many, this term may seem unfamiliar. In fact, under him lies the well-known ringworm. It can be easily picked up by talking to a street cat. The price of a minute tenderness is often this unpleasant disease.

Trichophytosis is a dermatological disease of fungal nature. It affects the scalp, skin and nails. Initial signs of infection appear during the first week. With timely treatment, the ailment passes without a trace. Otherwise, a progressive pathological process can lead to a violation of the integrity of the skin and persistent alopecia. 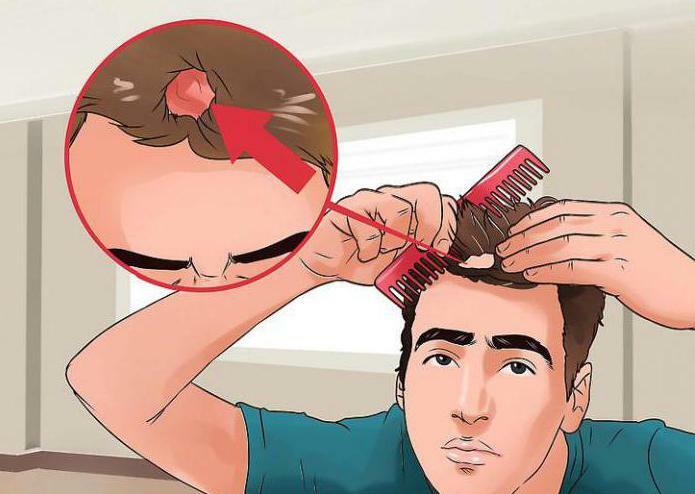 Trichophytosis in humans can be of several types: superficial, infiltrative-suppuration( deep), chronic. Each of the forms of the disease is characterized by a specific clinical picture. More details about them will be told below.

Trichophytosis - this name is derived from the main causative agent of the fungus - the trichophyton fungus. Medical references also use other names: ringworm, dermatophytosis, dermatomycosis. However, all this is synonymous with one pathological process.

Getting on the human skin, fungi penetrate into the dermis, where they begin to multiply. If spores grow next to hair follicles, they may be affected.

Routes of transmission of

The main carriers of fungi are street animals, as well as children of younger and middle age. In the first case, the disease will be more severe. The thing is that the cause of ringworm can be other fungi. However, it is the trichophytons that are the most common pathogens of the disease.

Fungus has the property of being preserved on household items. Therefore, the main way of transmission of the disease is contact-household. It is not necessary to have direct contact with an animal or an infected person. Trichophyton spores easily spread through the air and quickly "take root" in the body.

On the other hand, after direct or indirect contact, a person does not always fall ill. If the fungus just gets on the skin, it will be destroyed by the immune system. To have an infection, it is necessary to have predisposing factors. These include traumatic skin damage, prolonged exposure to high humidity and a decrease in body defenses. 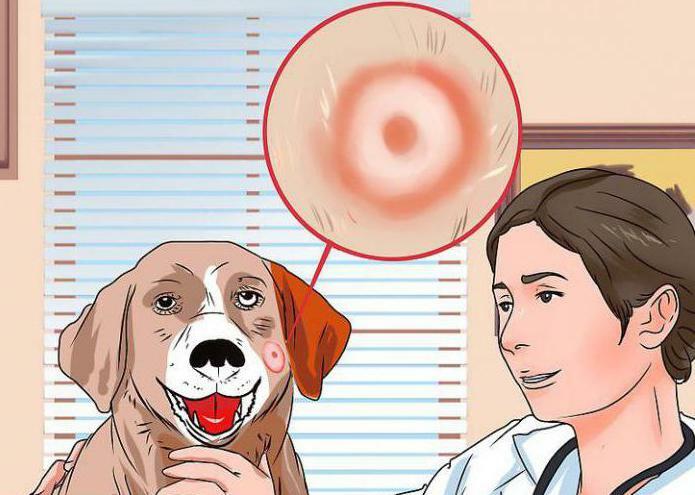 The probability of infection of fungal infections in virtually all age and sex groups is the same. However, trichophytosis in children attending kindergarten or school is revealed several times more often. This is evidenced by medical statistics.

Fungus, which falls off with particles of hair or wool, can live in the soil for up to several months. Therefore, the number of cases of infection increases in the autumn-spring period, when agricultural work begins. The likelihood of such an ailment developing among farmers and gardeners is high.

The incubation period of trichophytosis in humans is 3-4 days. Then the main symptoms begin to form. They depend on the area in which the main focus of the pathological process is localized.

For example, with a lesion of smooth skin, the disease manifests itself in the form of peeling pink spots, bordered by a small thickening. Periodically, bubbles of small size may appear on this peculiar rim. Over time, they burst, dry out and become crusty.

When it comes to affecting the skin under the hair, initially they begin to peel off. In this case, the patient does not experience discomfort. Then on these sites the hair becomes brittle. And after a while they start falling out. As for the nail plates, they appear black spots. They gradually increase in size, extending to the entire plate. The nail itself becomes brittle.

Features of the course of the disease in children

Trichophytosis in children in its clinical manifestations does not differ from the adult form of the disease. However, in small patients the probability of self-healing is almost zero. Therefore, the infection process should be treated immediately after the appearance of the initial signs. In addition, you must thoroughly disinfect all clothing and personal items to remove the remaining fungus spores. This is a kind of prevention of trichophytosis, or rather, re-infection.

The incubation period of the disease is 7 days. Depending on the locus of localization, surface trichophytosis can affect both the scalp and the smooth skin. 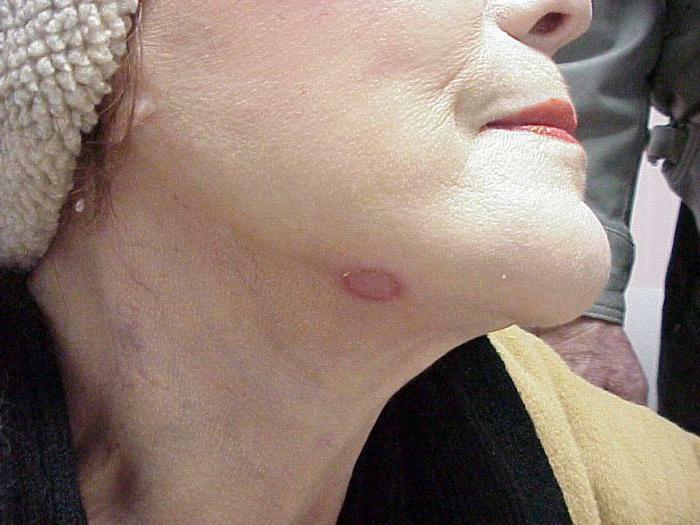 The first case is usually diagnosed in children. This form of pathology is much less common in newborns and adults. The patient can have multiple foci with blurred boundaries. In diameter, they reach 2 cm. They are localized mainly in isolation from each other. The derma around such a focus is red, slightly swollen, covered with scabrous scales of whitish color. Puffiness and redness are sometimes aggravated by vesicles and pustules. Hair that is in this area, gradually lose its luster and become brittle.

Smooth skin lesions occur in isolation or combined with trichophytosis of the scalp. Favorite places of localization are the areas of the neck and face, forearms, trunks. The disease occurs in people of different age groups. It begins with the appearance of one or two or three edematous spots. They have clear boundaries, they can protrude slightly above the surface of the skin. Itching is usually absent or weak.

In this case, the incubation period can vary from a few weeks to 2 months. The disease begins its development with the appearance of several pink spots with pronounced borders. The marginal cushion in them consists mainly of plaques and vesicles, which eventually shrivel into crusts. In the future, the inflammatory process is only aggravated. Stains increase in size, can merge into one. Favorite places of localization are the scalp. They can also occur in the chin area and above the upper lip.

When infiltrative-suppuration trichophytosis, lymph nodes sometimes increase. Patients complain of general malaise. It is not ruled out that the body temperature rises, severe headaches.

The disease is most often diagnosed among adolescents and adult women. In boys who become infected in childhood, spontaneous self-healing is observed during sexual development. In girls, pathology acquires a chronic course. The disease is characterized by a meager clinical picture. In most cases, it is detected during the "epidemiological chain" in order to establish a vector of fungal infection within the same family.

Pathological foci of chronic trichophytosis occur both on the scalp, and in the buttocks, shins, and forearms. Seldom the symptoms of an illness appear on the torso or face. First, the patient develops pinkish-bluish spots with a peeling surface. At the same abscesses or vesicles absent.

Against the backdrop of a chronic form of the disease, nail plates are sometimes involved in the pathological process. First they appear gray spots, which gradually increase. Then they change color to yellow, and the entire surface becomes bumpy. Further, the nail plates thicken and noticeably deform. 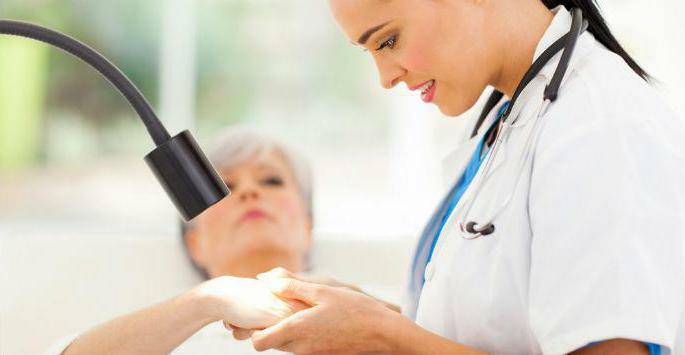 Trichophytosis in humans refers to dermatological diseases. Therefore, when suspected of ailment for help, you need to contact a dermatologist. Also in this area there is another specialist - a mycologist.

Diagnosis of fungal infection is fairly simple. First, the physician performs a physical examination, sometimes completing the examination using a Wood lamp. It is necessary for differentiation with microspores, which in the light of this device gives a green glow.

The next step in the diagnosis is the microscopic and cultural examination of scrapings from the affected areas. This approach allows you to accurately identify the causative agent of the disease. During the procedure, the doctor scalpel scraping skin scales or fragments of hair, and then examines them under a microscope and sows in the Saburo nutrient medium.

In practice microscopic and culture studies are not always appointed. An acute need appears only when it is required to determine the type of causative agent of pathology and its sensitivity to antifungal agents. Inexpensive, but effective remedies against trichophytosis will be mentioned below. 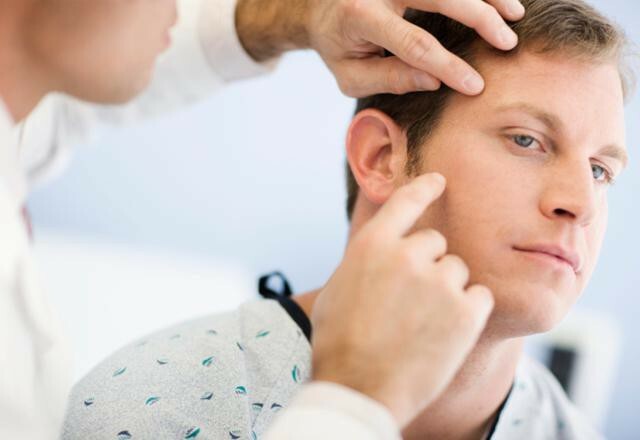 Therapy of a disease depends on where the focus of the pathological process is located.

The infiltrative-suppurative form of trichophytosis can be quenched by means of lotions prepared from Burov's fluid. In a hospital, the abscesses must be opened, then the cavities are washed with a special solution. The sanitized focus is treated with iodine tincture and sulfuric ointment is applied.

Therapy for trichophytosis of smooth skin is the external use of antifungal agents. Inexpensive, but effective agents are all known ointments: salicylic, sulfuric and sulfur-tar. Any drug can handle affected areas. Positive therapeutic effect is "Isoconazole", "Clotrimazole".To eliminate the pronounced inflammatory process it is possible with the help of medicines of combined orientation, in the composition of which there are hormones( "Mikozolon", "Travocort").If the underlying ailment is accompanied by a bacterial infection, the doctor can advise the cream "Triderm".

When infecting the scalp, systemic antifungal therapy is used. The main drug for eliminating pathology is the antibiotic Griseofulvin. It is available in the form of tablets and is a derivative of mold fungus.

Treatment of trichophytosis does not stop until the tests show a negative result. The standard course of therapy is from 1.5 to 2 months. 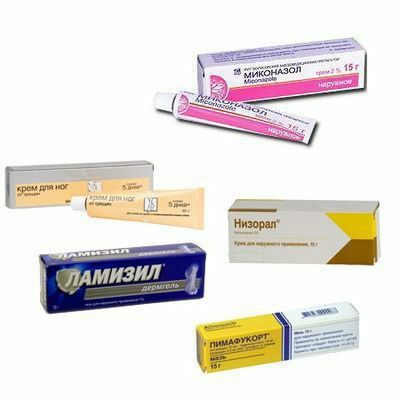 Features of therapy among children

Trichophytosis in small patients is treated according to the same principles as in adults. The changes concern only the choice of drugs. Preference is given to medicines that have terbinafine( "Lamizil", "Terbizil").They are less toxic and well tolerated by babies.

The dosage and duration of therapy is determined by the doctor. However, he must take into account the age of the patient and the form of the disease.

Traditional therapy of trichophytosis in humans can be successfully supplemented by the use of non-traditional means. For example, folk doctors recommend rubbing the affected area with an ointment prepared on the basis of garlic. The ground mass should be supplemented with plantain juice and birch charcoal. All ingredients are taken in equal proportions.

You can also wash the infected skin with water infusions from the string, celandine and horsetail. For this recipe, the herbs are taken in an approximate ratio of 4: 2: 1.Dry ingredients should be filled with water, leave to stand for 50 minutes. Apply the resulting remedy is recommended several times a day. 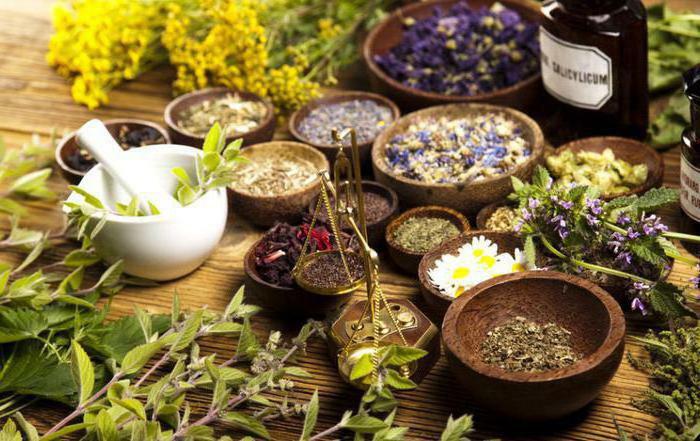 Prevention of trichophytosis should be carried out regardless of whether there is a risk of infection. First and foremost, doctors advise to observe basic rules of personal hygiene, not to use someone else's clothes and dishes. Daily it is necessary to take a shower, and after it to change underwear. Shoes should always be dry. Also, you should limit direct contact with people or animals who have been diagnosed with ringworm.