As is known, parasites are very common in nature. They penetrate into the human body and animals and can live there for a long time. Nevertheless, many types of parasites do not pose a great danger and often their presence does not appear. These include lamblia, pinworms, roundworms, etc. In some cases, the presence of these parasites is felt by symptoms such as stool, abdominal pain. Sometimes, on the contrary, their presence is invisible, and a person does not even suspect the presence of these creatures. The manifestation or absence of symptoms depends on the stage of the life cycle of the parasite. But, along with almost "harmless" creatures, there are others, the presence of which leads to serious diseases in humans and animals. An example is trypanosome. It is a single-celled organism with various morphological forms. This parasite belongs to dangerous creatures, since its presence in the human body and animals can lead to death. 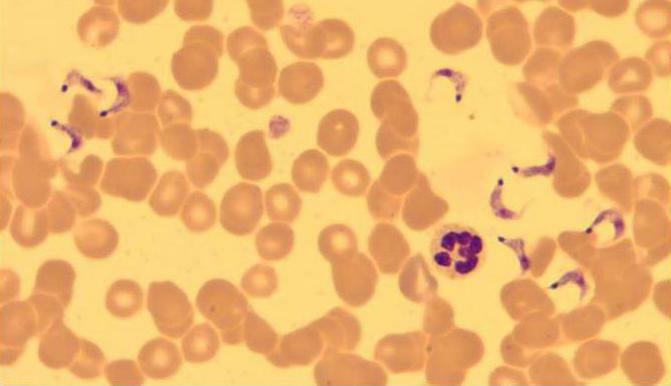 Despite the fact that trypanosome refers to unicellular organisms, it is very dangerous. Among the ailments that can develop as a result of her parasitism are Chagas pathology and African sleeping sickness. Which of these nosologies appears in the infected person, depends on the type of trypanosome. The peculiarity of this unicellular parasite is that it does not respond to immune defense mechanisms aimed at combating it. Tranpanosome carriers are insects. Depending on the species of the microorganism, its spreaders can be bedbugs or the Tsetse fly. The life cycle of trypanosome is complicated, since during its stay inside the insect and mammal it changes the morphological form several times. The ultimate host for this unicellular organism is man and animals( horses, dogs).The genus of "trypanosome" is an obligate parasite that does not have the ability to exist outside the "master".That is, until they get into the body of an insect or mammal, their vital activity is absent. 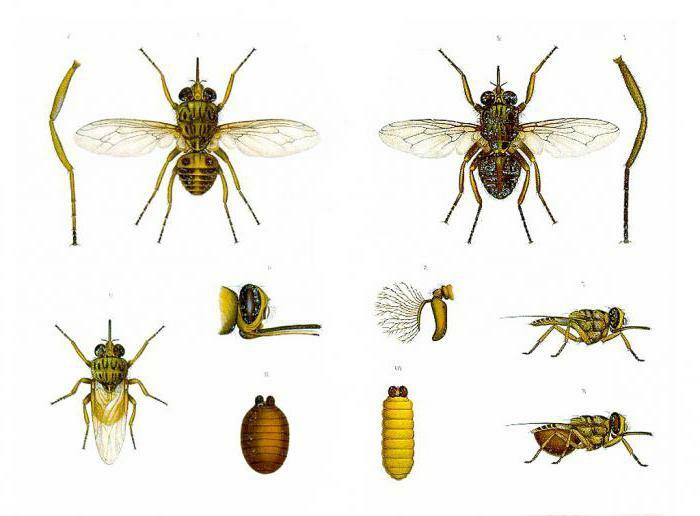 This parasite belongs to the family of Trypanosomatid. There are 2 species( groups) of these unicellular organisms. Among them:

The class of trypanosomes differs in that in the process of vital activity of these microorganisms their morphological form changes several times. This helps them to adapt both to the body of the intermediate host and to parasitize inside mammals. The following forms are distinguished:

Life cycle of trypanosome in the insect body

It should be remembered that these parasites are obligate, that is, they can not exist outside the host organism. The moment, from the entry of trypanosome into the body of the transporter and ending with its adaptation to the organism of a mammal or a person, is called the life cycle. During this time, the parasite reproduces by dividing, receives nutrients. The life cycle of trypanosome implies several successive changes in its morphology. The parasite enters the Tsesa flies in tripartomagotine form. Immediately after this, he loses glycocalyx - an element that is contained in the cell membrane. Within 10 days, trypanosome moves from the back of the mid-gut flies to the anterior. There the parasite reproduces. Then, for 8-10 days, it moves further - to the salivary glands. At this point, the parasite cell is fully equipped with mitochondria, since it contains functional cytochromes. Further, the parasite acquires an epimastigotic form. In the salivary glands it reproduces again, the part - is attached to the epithelium. The next stage of the life cycle is the transition to metacyclic form. At this point, trypanosomes cease to divide, become detached from the epithelium and enter the lumen of the salivary glands. On average, the cycle takes from 3 to 4 weeks. Transformation to other morphological variants occurs in the body of the final host, a mammal or a human. 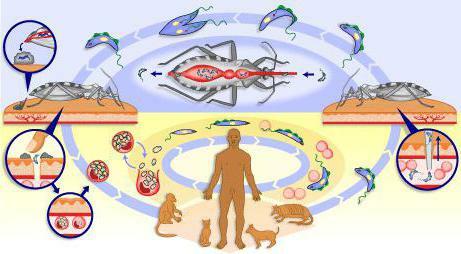 Trypanosome: the second phase of the life cycle of

The next stage of the life cycle of trypanosomes begins from the moment it enters the body of the final host, a human or a mammal. They penetrate there with the bite of an insect in metacyclic form. Once in the body, the morphology of the cell changes to amastigotine. In this form, the parasite multiplies. There is a pseudocyst formation. Having penetrated into the space between the cells, they take first the pro- and then the epimastigotic form. The pathogenic effect on the body begins after the parasite enters the bloodstream. There, it takes the tripomastigot form and affects the host cells. The life cycle of trypanosome in its body can be repeated several times. 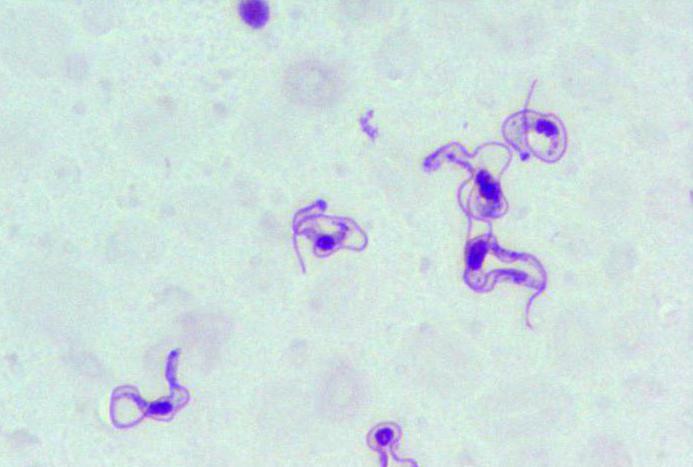 Mechanism of development of parasitosis

There are 2 types of trypsomiasis( Chigas pathology and sleeping sickness).Infection with one or another disease depends on which of the varieties( groups) of parasites has entered the body. The mechanism of development of these pathologies is different. When a tsetse fly stings infected with Trypanosome Salivaria, a person or animal is affected by a sleeping sickness. In the first weeks the parasite is in the subcutaneous fat. From there, it enters the vascular system. As a result, the hematopoietic and immune organs are affected: spleen, liver, lymph nodes. After further reproduction, parasites penetrate the cells of the nervous system. Getting them into the liquor causes damage to the tissue of the brain and spinal cord.

The introduction of this group of parasites occurs in two ways. The first is through the bites of bedbugs. The second is when triponosomes are introduced into the mucous membranes with dirty hands. Initially, infection occurs local specific inflammatory reaction - the development of "chagoma", parasites spread on the subcutaneous fat. After that, with the blood flow, they are carried to the organs. This group of trypanosomes affects lymphoid tissue, liver and muscles. The greatest danger is the damaging effect of parasites on cardiomyocytes. It is heart failure that leads to death from this disease. 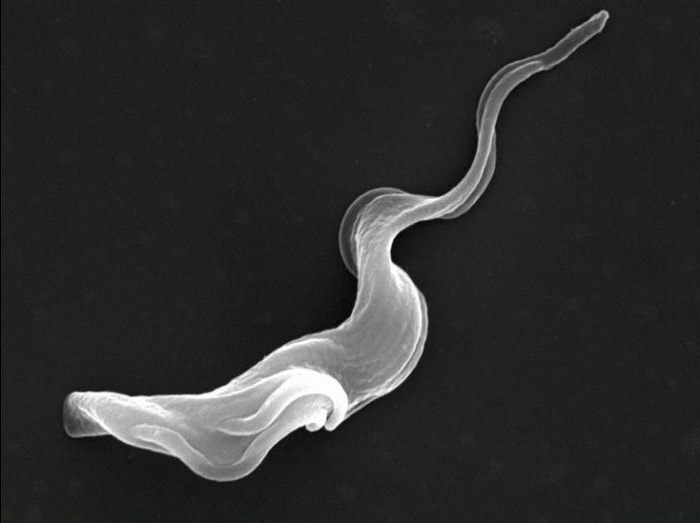 Trypanosome refers to unicellular parasites especially dangerous for humans and mammals. This microorganism multiplies asexually, the mechanism is longitudinal division. Diagnosis of trypanosomiasis in most cases in equatorial Africa and South America. This is due to the presence in these areas of insects, which are intermediate hosts for the parasite. Nevertheless, the disease can also occur in other countries, for example, after the arrival of a person from the site of infection. With Chagas pathology, the patient is concerned about the following symptoms: an increase in lymph nodes around the eyes, a violation of intestinal motility, pain in the heart, chills, myalgia. Most often in adults, the disease is chronic and can last for several years. In children under 5 years, acute course and high lethality prevail. Suspected sleep sickness can be on such signs as progressive weakness, headache, apathy, coma. To detect parasites in the body, serological diagnosis is performed: they reveal the antibody titer to the pathogens. 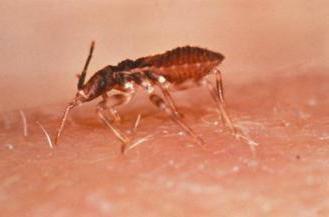 What should I do if I get a trypanosome?

The idea of ​​how to remove parasites from the body, is only an infectious disease doctor. Since trypanosomes belong to the causative agents of deadly pathologies, it is necessary to start helping immediately after they are identified. The treatment of parasitosis is effective only at the initial stages of the disease. Therefore, laboratory diagnostics should be carried out as early as possible in case of suspected bite of a bug or fly Tsetse. Confirmation of the diagnosis requires hospitalization, since drugs against trypanosomes can cause various adverse reactions.

To answer a question about how to remove parasites, only a specialist can. Treatment of sleeping sickness depends on the stage of pathology. If the affected are only the hematopoietic and immune system, drugs "Berilin", "Pentamidine" and "Suramin" are used. With the progression of the disease, these medications are ineffective. If the nervous system is involved in the process, the drug "Difluoromethylornitin" is prescribed. Treatment of Chagas disease brings results only at the stage of extracellular parasitism. For this purpose, the medicine "Nifurtinoks" is prescribed.

To prevent infection with trypanosomiasis, habitats of insects that are intermediate hosts of parasites are sprayed with special chemicals( disinsecting).When detecting diseased animals, they are destroyed in order to prevent the spread of the infection.