The live measles vaccine: instructions for use, features and reviews

The measles vaccine protects against a dangerous infectious disease. The schedule of vaccinations is approved in each country, it is oriented to the peculiarities of the population, the place of residence of citizens. Measles are transmitted by airborne droplets and can cause dangerous complications, so vaccination should be given to all children who do not have medical taps.

And also this type of vaccination should be made for adults who, for one reason or another, did not receive this protection in childhood.

With the invention of vaccines, mankind has managed to avoid the many epidemics that raged earlier. Because of outbreaks and the spread of various infectious diseases, hundreds of thousands of people died. It was difficult to find a family in which children from pertussis, measles, diphtheria, etc. did not die at an early age. Whole settlements practically died out because of the spread of dangerous diseases. 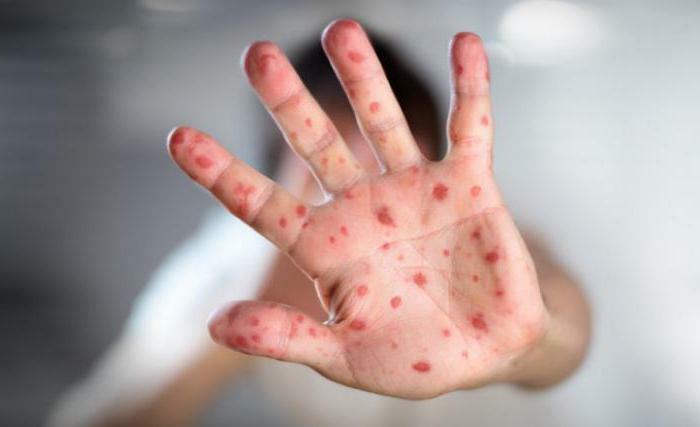 Measles used to cause widespread epidemics. This disease is transmitted through air and saliva, so the risk of getting infected is very high. Measles causes a kind of symptomatology, which before the onset of rash is not so easy to distinguish from a common cold or flu:

This disease can cause serious complications:

People with weakened immunity or suffering from chronic diseases from such consequences can die. And also small children enter the risk group, in which the protective mechanisms of the body only develop. It is very difficult for the adolescent to tolerate the disease due to hormonal changes in the body.

Therefore, to protect children from such a danger can only timely vaccination, which you do not need to give up, after reading an article of a so-called specialist who simply makes advertising on such topics.

These types of diseases also belong to the infectious and spread by airborne droplets. Parotitis and rubella flow somewhat more easily than measles, but can cause serious consequences.

So, parotitis is very dangerous for boys. The disease causes a violation in the reproductive system of children, which in the future can lead to infertility. And this kind of its kind is not treated medically. A guy in the future can remain without heirs. Rubella is very dangerous for pregnant women. If a woman falls ill with her in the first trimester, the risk of developing pathologies in the development and malformations of the baby grows several times. Most often a woman in this case is asked to have an abortion or artificial childbirth.

People suffering from immunodeficiency conditions can very seriously endure such diseases and find themselves in the hospital and even in intensive care.

Measles vaccine: Instructions for use

By vaccination, an attenuated virus is introduced into the body. After the victory over it, prolonged immunity is produced. The vaccine contains about 1000 units of tissue doses of measles virus. If a person does not suffer from serious illnesses, then the body easily overcomes it and develops immunity.

Live measles vaccine is produced in Russia. After this vaccination, the body will be protected from only one type of disease - measles. Such a vaccine is grown on embryos of quail, so it is better for people suffering from allergies to chicken protein to take this medication. 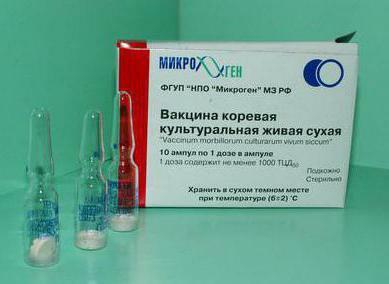 Measles vaccine is administered under the shoulder blade or shoulder. The single dose is 0.5 ml for all. Children are subject to vaccination according to the schedule and all contact persons( who have not previously received protection in the form of vaccinations) by measles within three days from the moment of manifestation of the first signs in the patient.

To get protection from several dangerous diseases at once, you can make a two-component vaccination. In this case, immunity against measles and mumps is developed.

This vaccine is also produced in Russia and is administered according to a standard schedule. It should be carefully doctors to study the anamnesis of the child, because it is made on the embryos of chickens and the composition includes antibiotic gentamicin. These components can cause severe allergic reactions. It is necessary to familiarize in advance with the instruction to the mumps-measles vaccine. 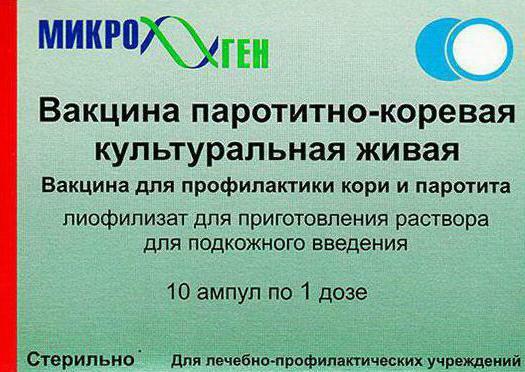 This vaccine is produced in dry form, so before administration, it must be diluted with a special solvent according to the instructions. Usually, dilute 0.5 ml per 1 dose.

After 3-5 minutes the mixture should acquire the appearance of a homogeneous liquid of pale pink color. The vaccine is administered under the shoulder blade or shoulder. After dilution, the liquid can not be stored and must be immediately used or disposed of.

This type of vaccine contains particles of viruses of three diseases:

With one vaccination, you can protect your body from three dangerous diseases at once. This vaccine is produced in Belgium. The PDA is administered on a standard schedule in the shoulder or thigh at a dose of 0.5 ml. 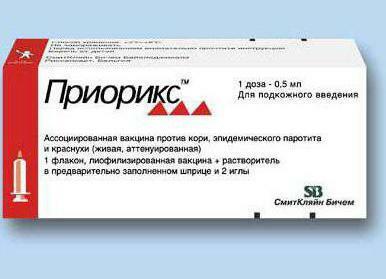 It should be remembered that women after vaccination within a month should be protected from pregnancy. Otherwise, the fetus may have irregularities during the formation of organs in the first stage.

is made According to the standard schedule, vaccinations are done twice. At the age of 12 months, the first administration of measles vaccine is made. Repeated children are 6 years old.

If the schedule is broken for one reason or another, the vaccination is carried out at any age with a minimum interval between the 6-month administration. Before the procedure must necessarily be examined by a pediatrician or a therapist.

All males at risk who were not vaccinated earlier are also subject to measles vaccination vaccinations during the epidemic. Such manipulations can also be made to patients who have lost their medical records and do not know if they received appropriate doses in childhood. 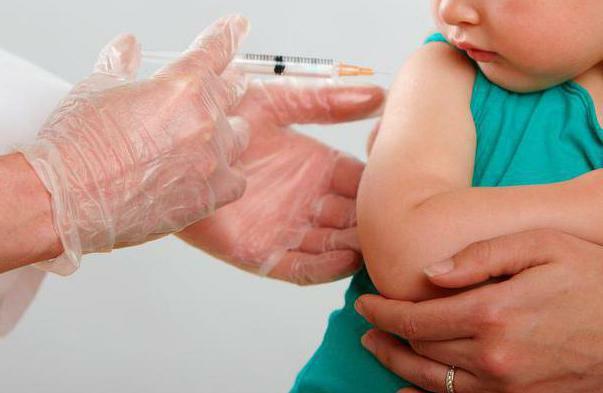 According to BO3, immunity is produced within 4-7 weeks. During this period, the body is somewhat weakened and susceptible to the ingress of various viruses. There is one peculiarity in vaccines: in 5% of cases, immunity may not be fully or partially developed, so it is necessary to repeat the vaccination according to the schedule.

Any such manipulations should be performed only after examination by the therapist. You can not inject live measles live vaccine during ARVI or exacerbation of a chronic disease.

The vaccine, like any other drug, has a number of contraindications:

Such diseases as cerebral palsy, bronchial asthma, dermatitis and other chronic manifestations in the period of remission are not contraindicated to vaccination.

It is necessary to abstain temporarily from vaccination after suffering serious illness or injury until the body is completely restored.

The instructions to live measles vaccine indicate that it is often well tolerated. In rare cases, minor side effects may occur:

Such reactions do not require treatment and go on themselves after a while. Perhaps the use of drugs on the temperature, which also have an anesthetic effect in the first few days as directed by the doctor.

Sometimes, from the 7th to the 21st day, a child may develop a minor rash. Such a reaction is not dangerous to the baby, but requires the supervision of the pediatrician. The use of ointments is not welcome. An exception can only be severe itching in these places. Then the pediatrician prescribes antihistamines and ointments. 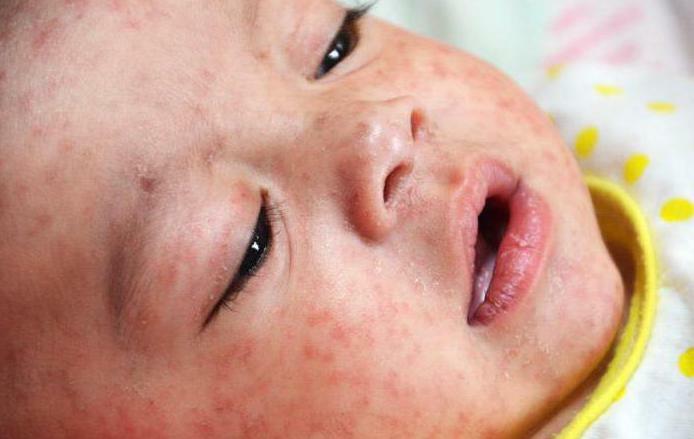 In the first few days after vaccination, it is desirable to avoid crowded places so as not to become infected with ARI.During this period, the body will be somewhat weakened and prone to various diseases.

The vaccinated person can not be a carrier of measles, mumps, rubella, so the surrounding danger will not bring.

Reviews about these vaccinations

You can find many comments about the use of measles vaccine. Most children suffer it without complications and side effects. But there are episodes when a child, a few days after its introduction, complains of pain at the injection site.

In this case, pediatricians recommend giving the child a medicine based on ibuprofen. Many mothers also advise a painful place to attach a cabbage leaf for several hours.

There are reviews where children react to measles vaccine as a fever. At some children it promptly grows up to indicators 38-39о.In this case, it is justified to use antipyretics, which are permitted in pediatrics.

Some mothers write that small children in the first few days after vaccination are rather capricious and they have sharp changes in mood. In this case, you need to be patient and just wait out this period.

Sometimes there are reviews that indicate that the guys have a rash, but it goes through a short time. All these reactions are described in the instructions for use of vaccines and are a measure of the norm.