In the modern world, a person's life is filled with a lot of stressful situations, causing many different violations in the work of the body. One of the most common problems of modern man is insomnia. Sleep disturbance can be permanently dislodged, lack of sleep affects working capacity, processes in the brain slow down. Counters of pharmacies are filled with various drugs: from homeopathic to narcotic, whose producers promise a quick release from insomnia. One of these drugs, about which his instruction tells in detail, is "Sonmil". 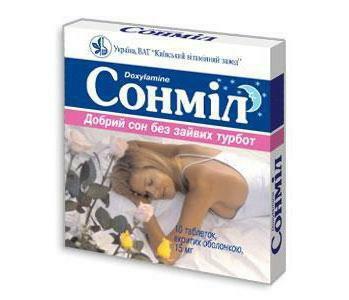 What is the "Sonmil" preparation?

The drug is available in the form of white tablets of round shape, coated with a film in the form of white or milk color. In the middle there is a notch to facilitate the separation of the tablet in half. One tablet contains 15 mg of the active ingredient of doxylamine. The composition also includes auxiliary substances - cellulose, lactose, magnesium stearate.

"Sonmil" refers to a group of sedative, hypnotics and antiallergenic drugs. The main active substance - doxylamine - is part of a group of ethanolamines that can block M-cholinergic receptors and have a strong sedative effect. As the instruction indicates, "Sonmil" penetrates the blood-brain barrier into the central nervous system, causing a rapid falling asleep, improving the depth and quality of sleep. The muscles under the action of the drug relax, the spasm is removed from the smooth muscles of the internal organs, which significantly affects the speed of immersion in sleep. In this case, the drug does not affect the cyclicity of fast and deep phases of sleep."Sonmil" is actively absorbed in the gastrointestinal tract and is metabolized in the liver. It is excreted from the body with urine, partly with feces. 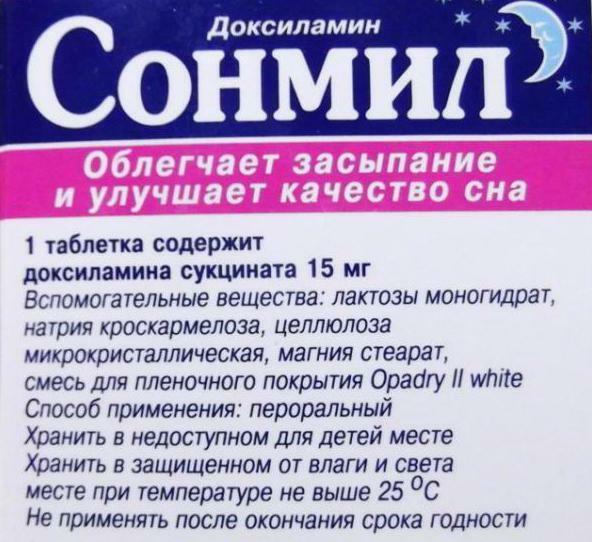 Who is shown the use of the drug?

"Sonmil", the instruction for use of which is in each package of the drug, is recommended for patients suffering from insomnia and other sleep disorders. The doctor can prescribe the drug if the depth of sleep is disturbed, if the patient wakes up in a poor state of health with a feeling of lack of sleep, although the duration of the night rest was sufficient.

How should I take the drug?

If the attending physician has appointed "Sonmil"( tablets), the instruction suggests taking the medicine for half an hour or 15 minutes before bedtime. It should be borne in mind that after receiving "Sonmila" the duration of sleep will be at least 7-8 hours, so you need to calculate the time allotted for rest. Adults should take half a tablet of the drug. If this is not enough for a full sleep, the dose can be gradually increased, while the maximum single dose in two tablets should not be exceeded. Duration of the drug in each case is individual and discussed with the attending physician. As the instruction shows, "Sonmil" is taken from two days to two months. 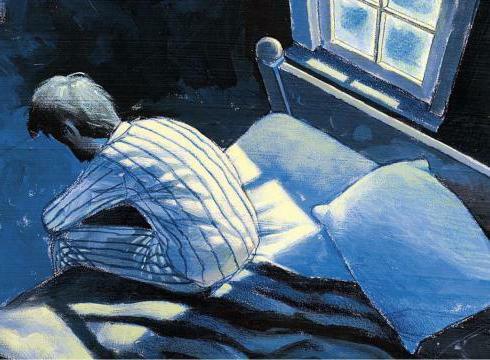 Unpleasant side effects of

In most cases, "Sonmil" is very well tolerated by all patients. In rare cases, you may feel drowsy in the morning. It is important to make sure that the dream lasted no less than seven hours after the patient took the drug "Sonmil".The instruction also indicates rare cases of impaired coordination, marked dizziness in committing sudden movements. Similar symptoms persist for several hours after awakening, and to prevent their development, the next dose of the drug should be reduced.

In rare cases, the patient feels dry mouth, visual impairment. As the instruction says, "Sonmil" from the side of the digestive tract can cause constipation, and from the urinary tract - a delay in urine. 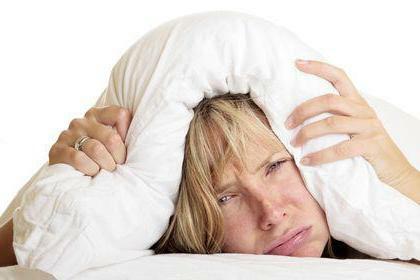 As with any medicinal substance, Sonmil has a number of contraindications to the use. These include individual hypersensitivity to the components of the drug, pregnancy and the period of breastfeeding( the drug penetrates through the placental barrier, having a negative effect on the development of the fetus, and also excreted in the mother's milk).Contraindicated "Sonmil" children.

Due to the fact that the drug has holinoliticheskim action, its use is not possible with a closed-angle glaucoma, complicated urination, which arose because of benign prostatic hyperplasia in men.

"Sonmil" causes characteristic symptoms in case of drug overdose. A person has a feeling of anxiety, coordination of movements is disrupted, depressive disorder may develop. The patient experiences severe drowsiness, his hands begin to shake, his face turns red, his body temperature rises. With severe intoxication, it is possible to develop convulsive seizures, collapse, the patient may fall into a coma. When developing the first symptoms of an overdose, stop taking the medication and consult a doctor as soon as possible. Most likely, the treatment will be aimed at eliminating the symptoms. In severe cases, the patient is hospitalized, carries out anticonvulsant therapy and artificial ventilation of the lungs. 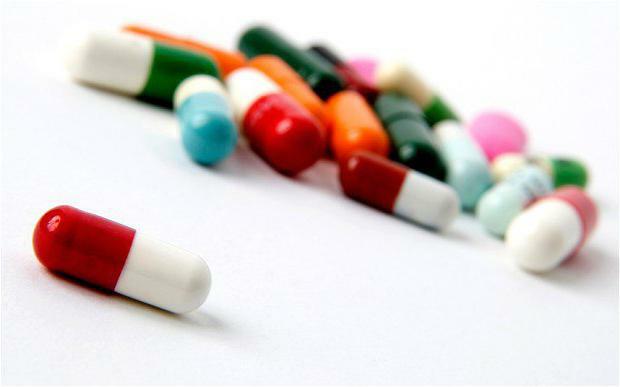 Is it safe to combine Sonmil with other medicines?

Often, patients who see a doctor with sleep disorders have other co-morbidities that require constant intake of other medications. Is it possible to safely combine the usual drugs and "Sonmil"?Instruction, reviews and doctors say that it is possible, but it is necessary to take into account the effects of the drugs on each other. For example, hypnotics increase the effect of barbiturates, neuroleptics. Stronger begins to show its pharmacological effects and the drug "Clonidine."With the simultaneous use of medications against depression and "Sonmila", the relaxing effect of the latter increases. In the same way, medications from the cough of central action interact with it. Joint reception with anticholinergics( "Atropine", "Scopolamine") causes severe dryness in the mouth and constipation.

Features of treatment with

In the morning, after waking up, do not immediately get out of bed. It is worth to lie down for a few minutes and then slowly rise. This is due to the property of the drug causing dizziness. Since "Sonmil" causes a slowdown of reactions and a decrease in concentration of attention, it is worth refraining from driving. Categorically it is contraindicated to drink alcohol when treating the drug. 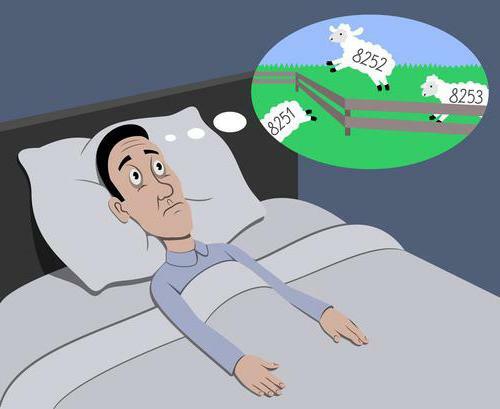 Reviews of doctors and patients about the drug

In medical practice, patients with sleep disorders doctors often appoint "Sonmil".Instructions for use, reviews of doctors talk about the high effectiveness of the drug. The medication provides a quick sleep and is not addictive. Therefore, he often acts as a drug of choice of doctors in the treatment of insomnia.

The patients' reviews were divided: someone treated the medicine perfectly and relieved of sleeping problems, and someone experienced side effects and refused to "Sonmil".Most patients continued treatment and noted a significant improvement in sleep quality.