Rupture of the cruciate ligament of the knee: causes, first aid, treatment

Injury, which can occur anywhere and under different circumstances, is the rupture of the cruciate ligament of the knee. Most often, because of such damage to patients surgical rooms are people who lead a mobile life, and athletes. Of all the tendons of the knee, the cruciform is most prone to rupture, since they belong to the most functional tendons and almost all movements are performed with their participation. 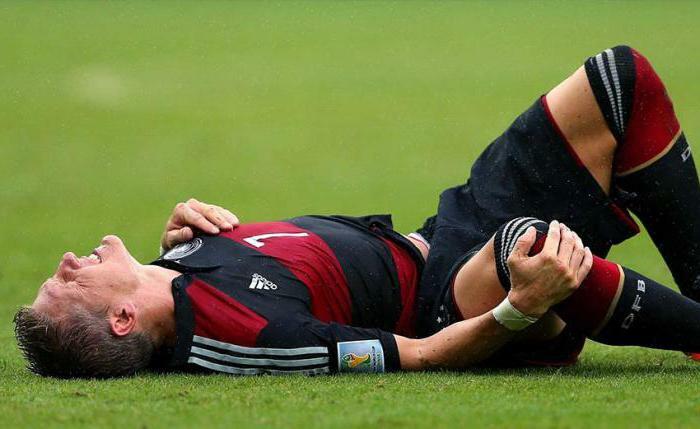 Degree of damage to the

The rupture of the cruciate ligament of the knee is obtained by the impact or force directed to the rear of the knee, with the inside tibia turned in a bent position. Trauma is sometimes accompanied by bone fractures at the junction with the tendons, which affects the procedure of treatment. Severe lesions include rupture of both cruciate ligaments in combination with two lateral tendons and an articular capsule, the consequences are manifested in the appearance of a "loosened joint" and the impossibility of using the foot when walking. The classification of ligament injuries is as follows:

A traumatologist examines an injured limb, he decides whether an operation is necessary on the knee, depending on the severity of the lesion. The initial study consists in conducting a survey of the victim and palpation of the knee joint. 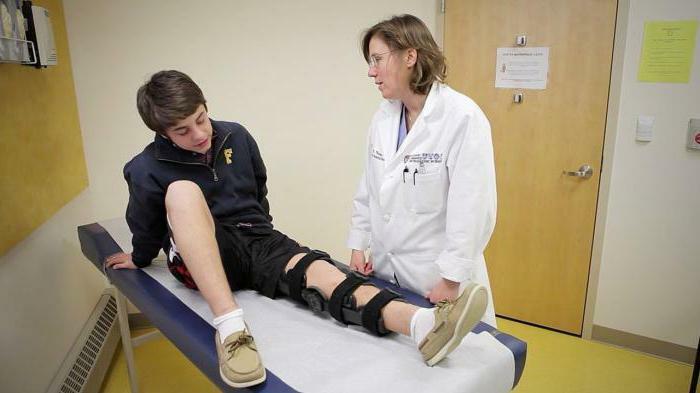 The second stage is radiation diagnosis, resulting in X-ray prints of the lateral and direct projection. In some cases, for better viewing of bones, computer tomography is used. Clear visualization of ligaments, muscles look at magnetic resonance imaging. After this, the consequences of trauma are determined with a high degree of accuracy.

The doctor conducts the Lachmann test, which consists in placing the patient on the back and covering the back of the thigh with the right palm. With the left hand, the proximal shin portion is gradually pulled forward. Conclusion on the degree of destruction of the cruciate muscles is done, based on the possibility of extending the joint forward and on how the swollen knee looks like.

Symptoms of an ignored knee injury

Sometimes patients who are injured do not pay attention to changes in joint behavior when walking. If the degree of damage is light, the instability of the joint will eventually pass. Ignoring the symptom leads to the development of arthritis of the joint even in middle and early age. After a short time, the patient consults a doctor with a strong swelling of the tissues adjacent to the knee. The swollen knee is to be released from the joint fluid.

Rupture of the anterior ligament leads to the development of hemarthrosis, accompanied by the ingress of blood clots into the internal joint cavity. This consequence of inattention to health is characterized by severe pain, which does not allow the specialist to conduct a palpation examination.

Tearing of the cruciate ligament in front of the knee

The function of the tendon muscle is to protect the joint from flexion in the opposite direction. The trauma is caused by the situation when the person firmly fixed the foot with the shin, but it is required to carry out a circular movement outward. The impact is attributed to the indirect type, as well as the landing after an unsuccessful jump. Indirect action on the knee joint is the result of movement in the game sports. 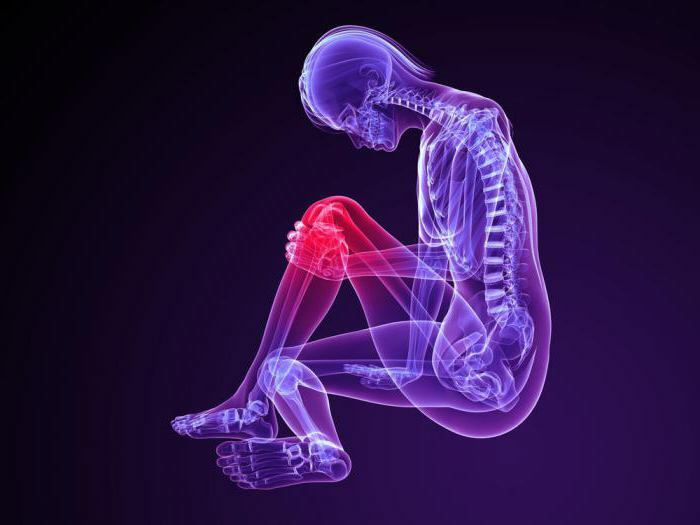 The second type - direct impact - refers to those cases where the rupture of the cruciate ligament of the knee occurs when a destructive action is applied to the object or when it falls. Such sports as hockey and baseball are typical for obtaining such injuries. The rupture of the anterior cruciate ligament of the knee is a serious injury and is treated by a specialist. The use of conservative methods does not always lead to positive results, almost all patients experience edema and increased pain after the measures taken.

This tendon muscle is located behind the anterior cruciate ligament. Its damage is observed less often, since nature has well protected the bundle. Causes of rupture of the posterior ligament is a strong impact in front of the knee or shin. Such impacts are encountered in case of accidents, road accidents, sports competitions. If there is a suspicion of rupture of the posterior tendon, the working condition of the half-lateral angle( the posterior section of the joint) is checked. In more than 50% of cases, a bone fracture and posterior rupture of the cruciate ligament of the knee are combined. Treatment is complicated by the restoration of two body systems.

Recognition of a rupture of the posterior ligament

A characteristic symptom is a small subluxation of the tibia in the rear position, it is clearly visible on X-rays. In this case, ultrasound does not show the severity of the problem. The patient experiences pain in the knee, swelling of the tissues develops, the movement of the joint becomes unnatural when walking, a feeling of emptiness and instability in the knee.

Conservative treatment of a back muscle rupture

In contrast to the anterior cruciate tendon, the treatment of the posterior muscle has a positive dynamics. Restoration of the cruciate ligament of the knee requires fixed fixation of the quadriceps femoris muscle, which performs the function of leg movement. If there is only a tear in the posterior ligament, the patient independently rehabilitates, doing a set of elementary exercises.

Restorative gymnastics is simple, but performed constantly, the exercises are given by the doctor. It is prescribed treatment with anti-inflammatory drugs, painkillers, diuretics.

Surgery for the rupture of the posterior ligament

Surgical intervention is determined by implanting a prosthesis from a synthetic material or by inserting grafts. Stitching of the ligament does not, as this procedure is futile. The surgeon works with the injured knee only in case of simultaneous fracture or rupture of the accompanying nodes. If partial tearing or stretching is observed, the treatment is carried out as rehabilitation after trauma. 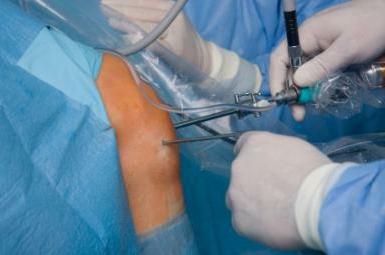 To remove blood clots from the inner region of the joint, blood sampling is done with an injection. Be sure of the remaining mobility after this procedure, exclude the break of the meniscus and impose a cast.

Leg in a fixed position is about a month, then go on to therapeutic massage, physical education and physiotherapy methods, finally healing the rupture of the cruciate ligament of the knee. Rehabilitation takes about 3-4 months, the opportunity to work is being restored.

Operation on the knee is not done immediately after the injury, as there is a risk of complications in the joint. They resort to urgent surgical intervention only in the event that the injury caused splitting and detachment of bone tissue. Then this part is attached to the base bone and a plaster is applied. 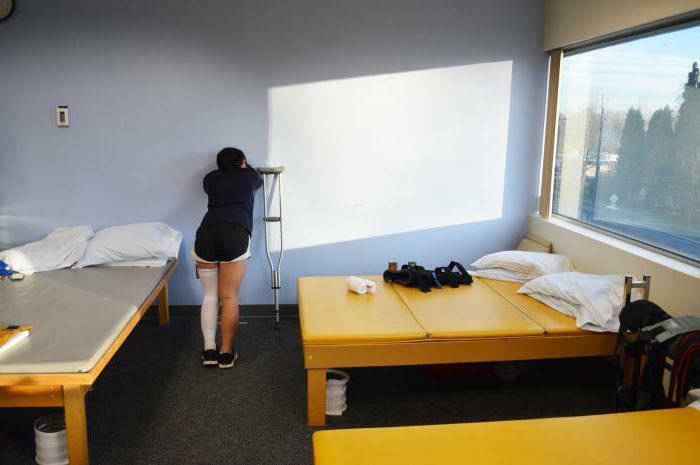 The first actions in the trauma of

The person is laid in a prone position. The injured leg is placed with pads so that the diseased joint is above the body level. This situation creates an outflow of fluid and blood from the problem site. Use any means to cool the knee, the ideal is to use an ice pack for two hours.

If there is a rupture of the cruciate ligament of the knee, timely assistance will prevent the occurrence of subsequent complications, will facilitate the treatment process. It is very difficult for a non-specialist to diagnose before the doctor's arrival, so if there is a suggestion that there is no rupture and the patient has been stretched, all precautions should be taken as for the rupture.

Quick help with a knee injury to the knee cap

If the patient has hurt her knee, what should she do? The first minutes after a bruise solve much in the further restoration of working capacity of a joint. If the injury occurred on the street, cause the ambulance, and before her arrival, take the first steps to reduce swelling. The patient is seated on a hill, for example, a bench and try to place any objects under the sick leg, so that the limb is placed as high as possible.

Apply ice to a problem site if the patient knocks the knee. What if there is no ice? Cold objects are suitable: glass jars, bottles - they should be cooled with water at short intervals. Cooling will create a local narrowing of the blood vessels and reduce the spread of edema, hemorrhage. 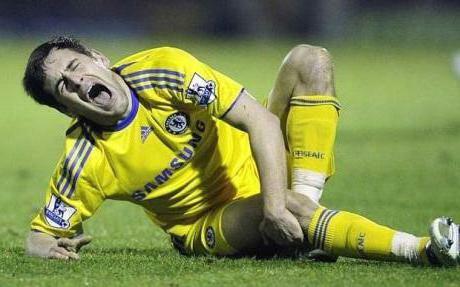 Preventive measures against knee injuries are not enough, trauma always happens unexpectedly, so first aid plays a primary role. Some people do not attach any importance to this, the bruise goes away, but sometimes after a few years problems with joint mobility begin because of the gradually developed complications.

Treatment of a knee injury

In case of a severe injury, a puncture is performed to remove the accumulated blood and fluid. To relieve pain, pain medications such as Analgin, Diclofenac, Dolaren, Ketanov and others are used. Lubricating the joint with ointments from bruising produces a distracting effect. Apply a fixative supporting bandage, which does not limit movement completely, only helps to protect the weakened joint from unnecessary loads.

Physical training and exercises help to fully restore the rupture of the cruciate ligament of the knee. Symptoms of severe lesions are passing, and the time of recovery begins. A prerequisite for the commencement of classes is the cessation of pain. Doing regularly, 2-3 times a day, all exercises are done 10 times each. The main exercises are: 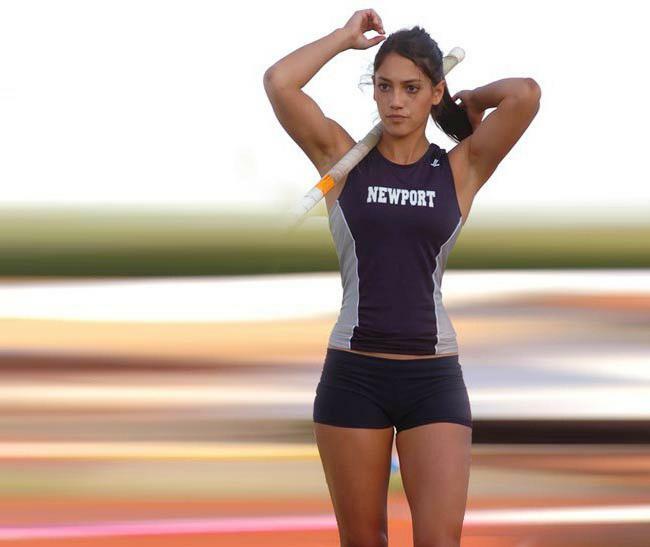 Injuries happen unexpectedly, but you need to take them seriously, you can not neglect the sprain of the ligament or a bruise for the sake of congestion at work or other matters. Incorrect treatment and incomplete rehabilitation become an obstacle to the normal functioning of the joint in subsequent years and provide restriction of movement in the elderly.