Fish allergy in the child: symptoms and manifestations

Manifestations of allergic reactions to food are typical for many. Different types of fish, sea delicacies, caviar - these are products that often contribute to the emergence of unpleasant symptoms. The allergy, as a rule, starts to disturb the person still in children's age.

Causes of the appearance of the pathology of

Allergy to fish in both the child and the adult occurs. However, it happens that in childhood the disease did not disturb the person, but was manifested for the first time when he tried an unfamiliar food containing seafood. Allergy to fish is characterized by the appearance of many different symptoms, and they are sometimes so severe that the patient needs an urgent consultation with a specialist.

Why does this disease occur?

Allergy to fish in a child, and in an adult, can be triggered by the following reasons:

Which marine delicacies are the most allergenic?

Intolerance to a product, as a rule, does not occur suddenly. Allergy to fish in a child usually makes itself felt at an early age. When foreign proteins penetrate the body, the immune system starts producing special cells.

This process is accompanied by the appearance of symptoms, many of which are very serious. Fortunately, knowing how an allergy to fish in a child manifests, you can prevent it from occurring. For this, it is necessary first of all to exclude the patient from contact with the product that causes intolerance.

Cases of fish allergy in children and adults are more common every year. Experts for a long time studied this problem and finally figured out why this disease occurs. It was also possible to establish which types of marine delicacies most often cause allergic reactions. Often individual intolerance provokes the following products:

As a rule, individual intolerance occurs in people living near the sea, where such dishes are often used for food. It should be borne in mind that, having arisen in childhood, an allergy usually accompanies a person throughout life. In this case, a negative reaction of the body is caused, as a rule, by separate varieties, while others are well tolerated. Often there is an allergy to red fish in a child. Therefore, doctors do not recommend giving these varieties to children.

Allergy to fish, its symptoms in children appear under the following circumstances: 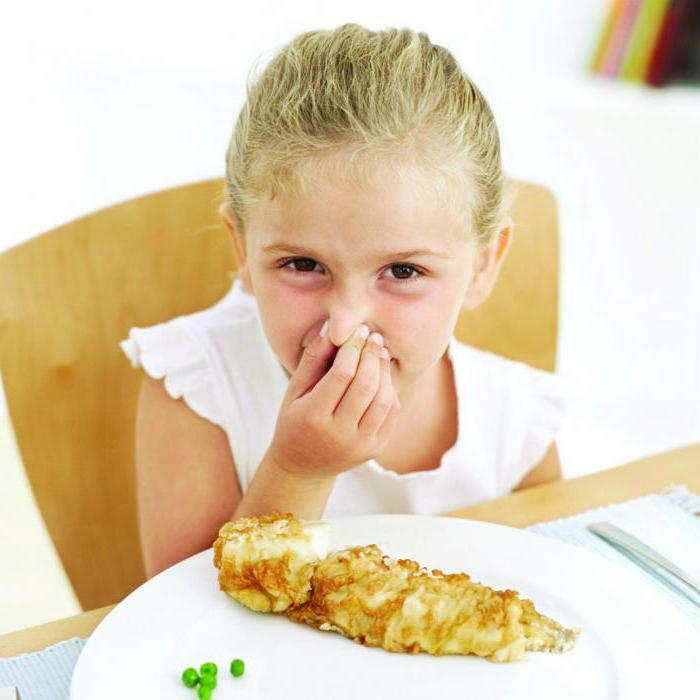 Sometimes the symptoms of an allergy appear even when the patient takes food fried in the same oil on which the allergen dish was heated before.

How to determine the presence of allergic reactions? First of all, they are characterized by symptoms that are immediately visible externally. The manifestation of fish allergy in a child( photos of children with external signs of such an organism reaction are presented in the text below) is described in the sections of the article.

Intolerance of any product may be felt by the onset of a complex of symptoms. From it suffer and skin, and the respiratory tract, and eyes. There is a general weakness. Fish allergy in a child and in an adult is characterized by the same set of common symptoms, for example: 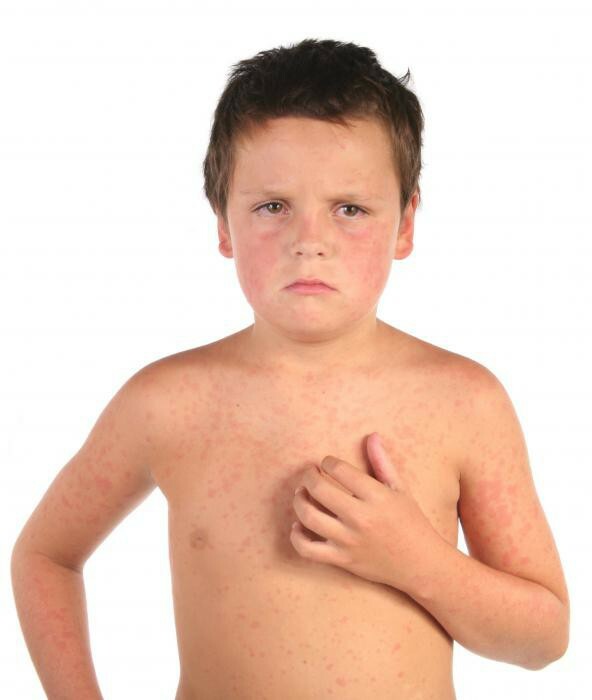 If a person has such signs of allergies, such as an accelerated heart rhythm, pallor, low blood pressure, a sense of weakness and loss of consciousness - this is anaphylactic shock. This condition requires immediate medical attention, as it can lead to death.

Fish allergy in a child: the manifestation of

Any mother knows that fish and seafood play an important role in the development of the child's body. Such dishes should be included in the diet of the child, because they contain many useful substances. These vitamins and trace elements contribute to the formation of immunity, harmonious development. However, given that allergies to fish are often seen in very young children, parents need to be careful when adding such foods to the baby's food. 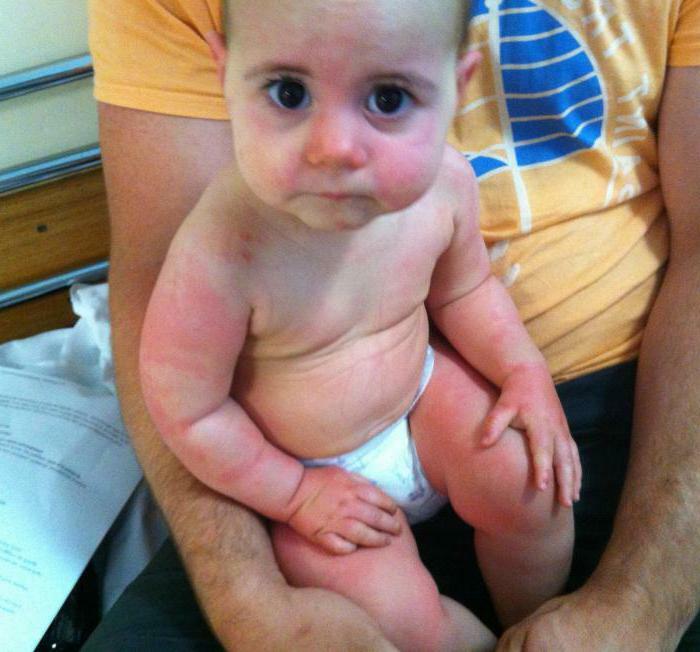 How to recognize the presence of a disease? The allergy to fish in a child has the following manifestations:

Allergy to fish in children( photos of kids can discourage the desire to feed seafood too responsible moms) is a serious business and requires careful study of the issue.

Symptoms of intolerance to a substance are different. It depends on how the patient interacted with the component that causes allergies. The ingestion of fish into the gastrointestinal tract can provoke symptoms of poisoning, allergic edema, skin rash. When tactile contact with raw seafoods or inhaling molecules during their preparation, inflammation of the connective shell of the eyes, a painful coughing, nasal flow and high fever often occur.

Approximately the same reactions occur in children with intolerance to fish food or interaction with water from the aquarium. This is due to the inhalation of substances that provoke these symptoms. Often there is an allergy to red fish in a child. Manifestations of intolerance are also when eating various types of eggs, shellfish and crustaceans. 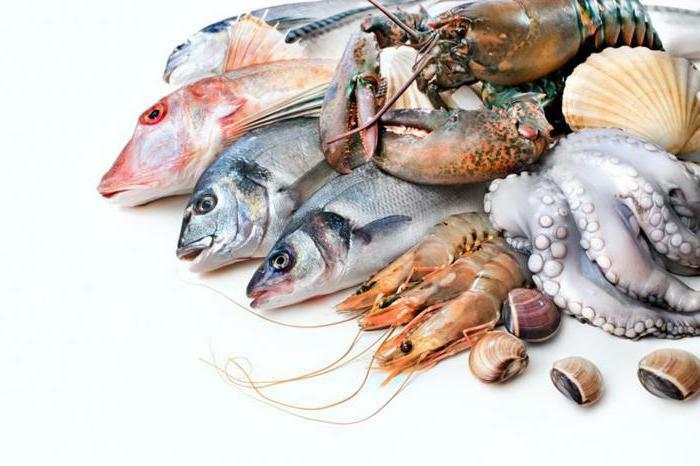 It is highly not recommended to give smoked and salted fish to children often. First, it causes the most severe allergic reactions due to the presence in it of artificial additives. Secondly, these dishes negatively affect the digestive system and kidneys of the child.

How to diagnose allergic reactions to fish in children?

To determine the presence of intolerance to any product, it is possible in a medical setting. The specialist will prescribe examinations that will establish the presence of an allergy to the fish in the child.

First of all, special diagnostic tests are conducted. They are called allergens. However, today more effective diagnostic methods are offered for children. These are laboratory blood tests.

If the child has signs of an allergy to fish and seafood, parents should remember which dish provoked negative reactions of the body. Having determined this, you need to make sure that this food has been excluded from the children's diet.

When the allergic reactions are detected, the most important thing is to stop using the product that provoked them. Particular attention must be paid to this condition in the event that the intolerance of the dish manifested more than once.

Symptoms of fish allergy in a child can be eliminated with antihistamines and medications that relieve inflammation. If the negative reaction of the body manifested itself as a runny nose or conjunctivitis, local preparations( ointments, sprays, nasal drops, gels) should be used. In order to quickly remove the substance that caused the allergy, apply adsorbing agents. When allergic swelling is necessary to do injections of synthetic hormones.

Specialists in the treatment of childhood diseases advise to follow certain rules in order to protect the child from the occurrence of allergic reactions.

First of all, lure with the addition of fish should be included in the diet gradually and only when the baby turns eight months old. First give small portions of the product( 1 teaspoon). 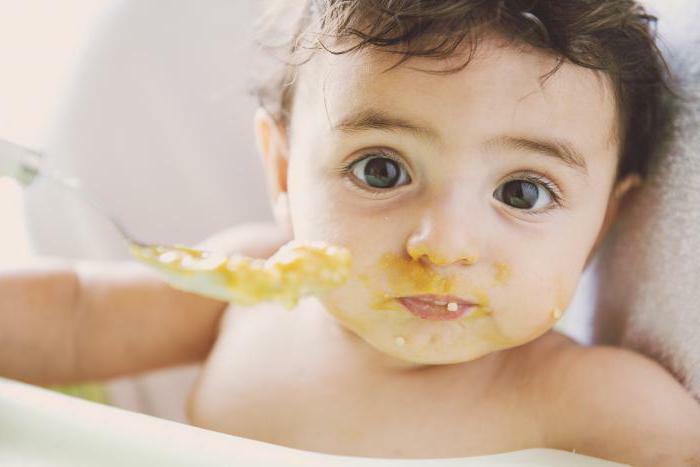 It is recommended to feed the baby with fish in the morning and monitor its condition throughout the day. If you feel worse, you need urgent help from a specialist. A child suffering from dermatitis, you need to enter the fish very carefully.

It is important for parents of more adult children with seafood intolerance to monitor what their child eats in catering establishments. Also it is necessary to carefully read the composition of products that are sold in stores. An allergy to red fish in a child is quite common. Doctors do not recommend giving such varieties to babies for up to a year.

What kind of fish can you do with allergies to children?

This question is considered to be controversial. Knowing the useful properties of fish, many mothers believe that this product should not be excluded entirely from the diet. Unfortunately, intolerance of these or those dishes can only be established by experience. It is known that red fish, caviar, mollusks and crustaceans are not recommended for children. However, cod, haddock, pollock, hake and herring are not considered dangerous and rarely cause allergies.

In case the child is contraindicated in any variety, you can replace this useful product with others. Necessary substances that are contained in fish are included in meat, buckwheat, nuts, mushrooms, vegetable oil, beans. You can also give your child vitamin complexes.

Manifestations of fish allergy - pathology, which is often found in adults and children. The most common types of intolerance are marine species. Also strong allergens are seafood( shellfish, crustaceans).Substances that cause intolerance are not removed from the dishes during their heat treatment.

Allergy can occur not only as a result of eating fish or seafood in food, but also by inhaling their particles and tactile contact. To avoid unpleasant symptoms in a child, you must carefully monitor its diet. 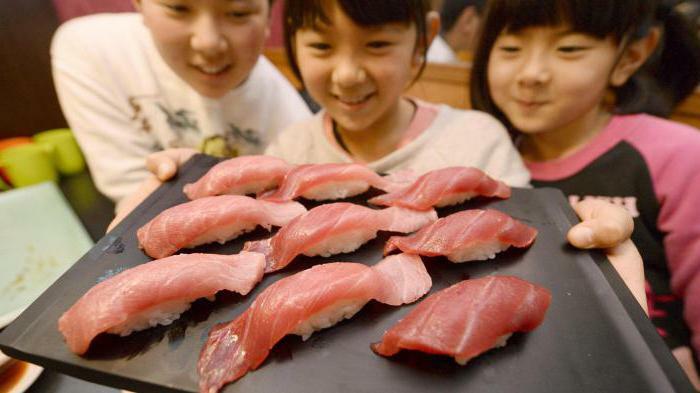 If you have any signs of allergic reactions in children, you need a doctor's consultation and therapy.