Pretty common and familiar to everyone is a plant such as medicinal verbena. Where does it grow? What is it used for? Verbena is found throughout the whole of Russia and Europe, from the Arctic Circle to the Mediterranean coast. It grows along roadsides, near fields and forest belts, and is therefore considered a weed. But at the same time it is also considered a remedy for many diseases. In ancient times, it was attributed healing and magical properties, it was believed that verbena medicinal can heal any disease. It was used as a guard in battle and to protect the house from evil spirits, gave to those to whom they wished good, laid on the altar, bringing unbreakable vows. Verbena drug, the photo of which you see in the article, was not ignored in modern medicine. 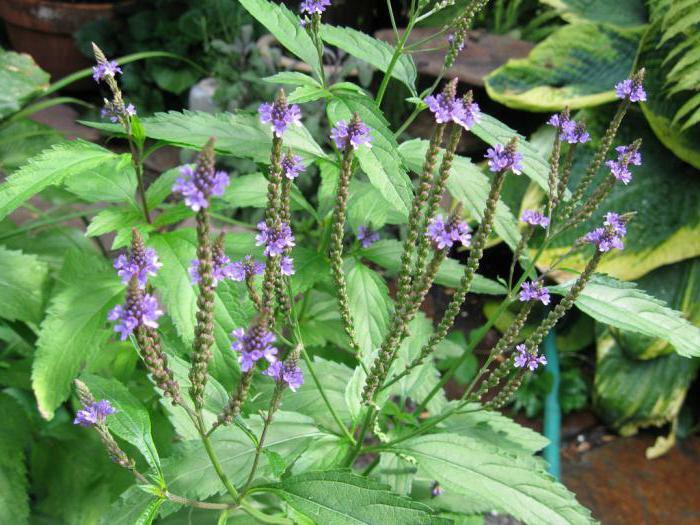 Verbena pharmacy( Verbena officinalis, verbena officinalis) is a perennial herbaceous plant. Stalk erect, the height can reach 80 cm, sometimes branched, has a four-sided shape, along the faces is covered with thin hairs pressed against the stem. The leaves are located opposite( in pairs from opposite sides) along the entire stem, their shape varies depending on the location on the stem.

Verbena inflorescences are similar to spikelets, located at the ends of branches, and consist of small light purple( less often - purple) flowers. The fruits have a dark brown color, resemble small nuts. Flowering of verbena in the middle zone of Russia occurs in July-August, fruiting - in August-September, in other climatic regions, these terms may vary.

Dried grass is greenish-gray, with a weak odor( the later the grass is collected, the weaker the smell, but at the same time the higher the content of nutrients). 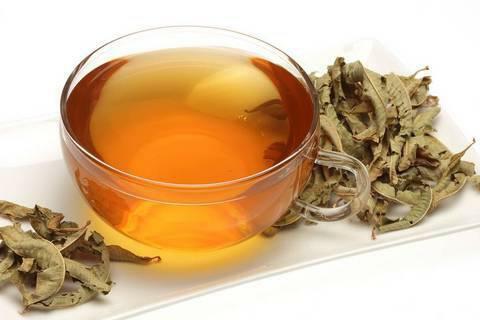 Studies have shown that different active substances with different effects on the body are contained in different parts of verbena, among them:

Verbena also contains salicylic acid, vitamin C and other vitamins, on which its fortifying and toning effect is based. It has a beneficial effect on a person's mental state, harmonizing the mood, reducing the feeling of fatigue and tension, improving sleep. 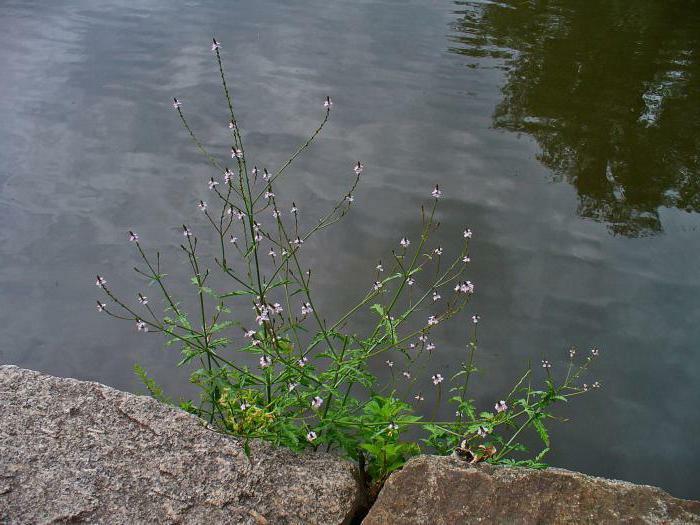 Verbena officinalis: use of

The range of diseases in which verbena drugs is used is quite wide:

Verbena also has a positive effect on male sexual function and increases lactation in women. But it should be remembered that the use of verbena during breastfeeding is with caution. Traditional medicine recommends lotion from this plant for psoriasis, erysipelas, and also as an antitumor agent.

It is important to clarify that the treatment of vervain drug will bring a positive effect only in complex therapy in combination with other, more powerful drugs. Attempts to treat solely folk methods with such serious diseases as erysipelas, heart failure and especially tumors, are dangerous to health and are absolutely unacceptable. 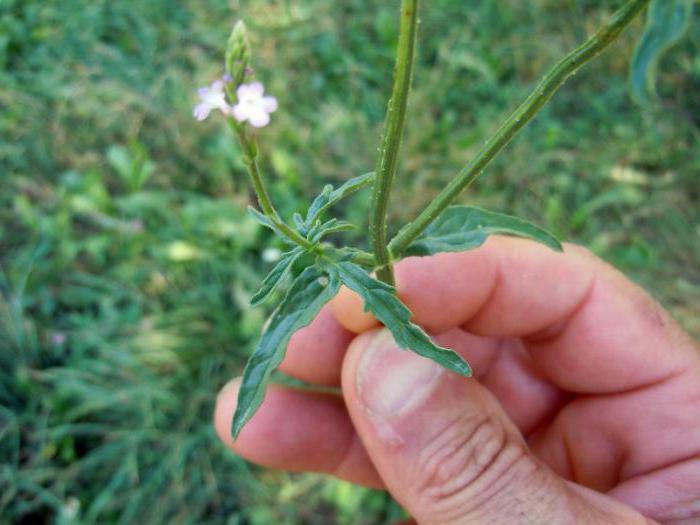 From verbena medicinal they receive decoctions, infusions, alcohol tinctures and extracts. Essential oils derived from it can be used orally, externally as lotions, to be included in tablets, cough drops, sprays with angina and other diseases of the throat, ointments, creams, eye drops. They are also used for inhalations with a special inhaler or aroma lamp.

Recipes of folk remedies based on verbena

Tea from verbena. Take 12.0-15.0 grams of dried grass, pour them 180.0-200.0 grams of boiling water. Take every hour for 1 tablespoon for a month with arteriosclerosis and thrombosis.

Infusion with thromboses and atherosclerosis. 2-3 teaspoons verbena grass pour a glass of boiling water, insist for an hour, drain. Take every hour for 1 tablespoon. This same infusion helps with blockage of veins. 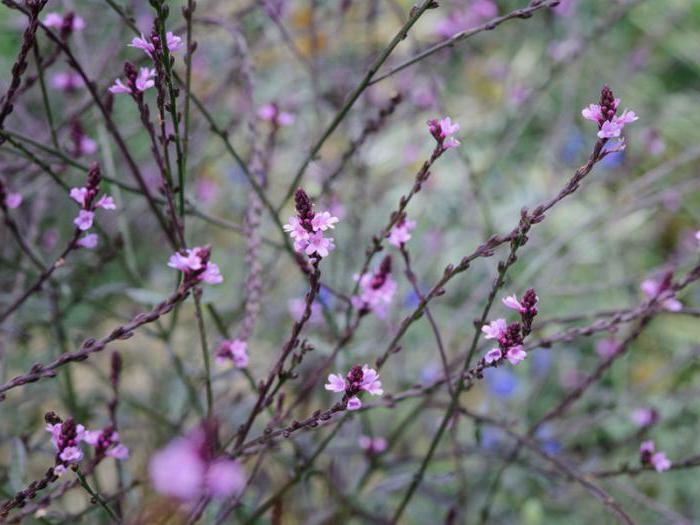 Despite its anti-allergic effect, verbena is a medicinal product and may itself be a rather powerful allergen. When using ointments and lotions, which include the oil of this plant, reddening and itching of the skin, the formation of blisters.

Also verbena categorically can not be used for hyperacid gastritis, hypertensive disease.

Taking medications containing this medicinal plant inside can irritate the intestinal mucosa and cause enteritis, sometimes severe.

Pregnant women should use vervain with caution.

If there are signs of an allergy, immediately stop using drugs on its basis, in case of severe pathology, consult a doctor.

Remember, before you start treatment with any drug, even an ordinary medicinal plant, you need to consult a doctor, as neglecting a visit to a specialist, we can seriously damage our health!

Non-medical use of verbena

Verbena drug is not only treated. The roots of the plant are used in cooking - they are part of the pickles and marinades, give them a characteristic tart and spicy taste. The above-ground part, collected during flowering, is added to tea or brewed independently as its substitute.

There are many decorative varieties of verbena used to decorate garden areas, flower beds and lawns. 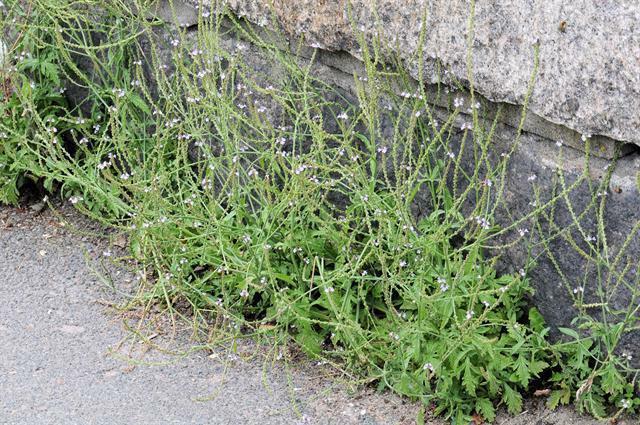 Collection and storage of

Verbena is harvested during its flowering in July-September. Cut the top of the shoot with the leaves and inflorescences and the lower leaves, which are collected separately. The collected grass is dried outdoors in the shade or at a temperature of about 30º if artificial heat is used.

Verbena roots are harvested in spring and autumn, sooner or later than flowering.

Store the dried grass and roots in a glass container with a lid, in a dry and warm place, without access to direct sunlight.

The use of certain parts of the drug verbena

Most often for medical purposes inflorescences, leaves and verbena grass are used, from them essential oil is obtained, which is included in ointments for external use, tablets and lozenges, also infusions, tinctures and decoctions thattake inside.

Roots are mainly used in cooking for adding to marinades - they give the billets a distinctive spicy taste.

The fruits of verbena are poisonous.

Verbena seeds are used to grow it. They have a dense shell and are placed in the refrigerator( stratification of seeds) for 4-5 days before planting into the soil to improve germination. 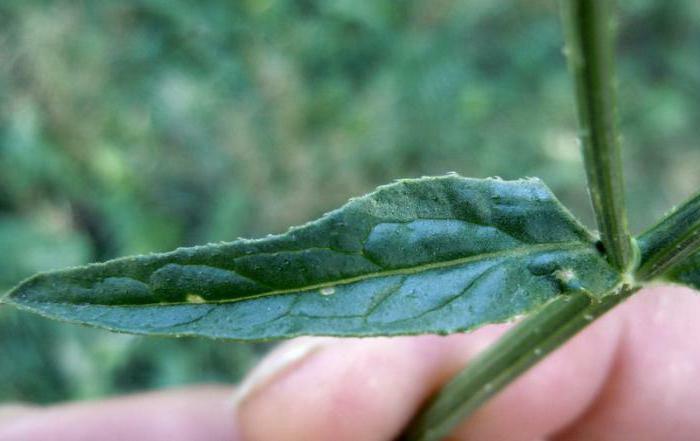 Verbena is a simple plant that can be grown on a garden plot. Most often it is planted for decorative purposes, but it retains its healing properties to the fullest.

How does the medicinal verbena sit? Seeds, previously subjected to cold treatment, are planted in the soil in early spring, seedlings - only after the warm weather is established.

Verbena is undemanding to the soil, but it is best to plant it in fertile loam. It grows well in brightly lit open areas. It easily tolerates drought, but badly - excess watering.

Decorative species of verbena are grown as annual flowers, and in autumn shoots are destroyed. Collecting seeds for the purpose of sowing for the next year is not recommended - they do not preserve the varietal characteristics of the mother plant.