Well-groomed feet and heels are very soft and gentle to the touch. The appearance of cracks on them is accompanied by a lot of unpleasant moments. First of all, this is an unattractive appearance. In addition, a similar problem can cause pain and discomfort during walking.

Causes of the appearance of cracks on the heels of

In this article we will consider such an unpleasant phenomenon as cracks on the heels. Causes and treatment of this problem with the help of special creams will also be described in more detail.

So, why do cracks appear on the heels? The most common cause is excessive dryness of the skin. This is especially true in the summer, when most people walk in open shoes. As a result of her socks, the skin may begin to crack and peel, which makes it rough and unpleasant to the touch. Another reason for the appearance of cracks is the defeat of the foot with fungal diseases. More often than not, we infect them in public places: baths, saunas, swimming pools, fitness centers and so on. Sometimes it's enough just by negligence to walk on the floor of similar institutions barefoot. In this case, the appearance of cracks is a minor problem. It completely disappears only after getting rid of the fungus. Therefore, it is on this need to direct all its forces.

Various diseases can provoke the appearance of cracks on the heels: flat feet, diabetes, gastritis. And also avitaminosis, the presence of problems with the kidneys, the thyroid gland. Therefore, when determining the cause of the problem, it is worthwhile to undergo a full medical examination. Cracks on the heels can also appear as a result of the impact of many external factors. First of all, this constant wearing of uncomfortable tight shoes, as well as synthetic socks and tights. It must be remembered that the skin of the legs should also breathe. Therefore, it is worth giving preference to natural materials. As we see, in some cases, rapid disposal of the problem involves the admission of special medications( in the presence of fungus and various diseases), while in others it is enough to buy a specially designed cream for heels from cracks. Which one should I choose? Let's consider several types in more detail.

Let's start with the means, which as the main component contains the oil of mountain pine. In addition, the cream for heels from the cracks "Alga San" includes allantoin, turpentine and bisabolol. The product has a high efficiency. It can stimulate the renewal of epidermal cells. In addition, it has an anti-inflammatory effect, improves local blood supply. The cream perfectly moistens the upper layers of the skin, and also increases its elasticity and elasticity. 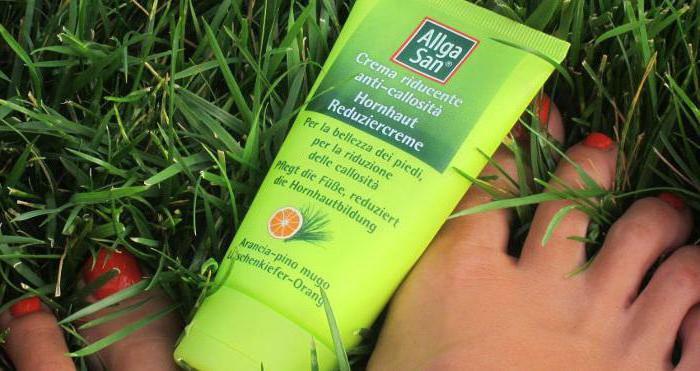 The effectiveness of the cream has been proven clinically. And customer reviews once again confirm this. Judging by them, the remedy is very convenient in use, differs by the presence of a positive result after the first use. In addition, it has a pleasant herbal flavor and a safe natural composition.

The next tool we'll look at is Foolex. The foot cream of this company contains soy and coconut oil, urea, horse chestnut extract and menthol. Each of the components performs a certain function. For example, urea has anti-inflammatory properties, oils soften and moisturize the skin, and also prevent the appearance of new corns and calluses, menthol gives dermis useful elements and freshens it, and extract from horse chestnut can remove puffiness. Cream "Fuleks" has no contraindications to use, except for the presence of individual intolerance to one of its components. Otherwise, there may be an allergic reaction. 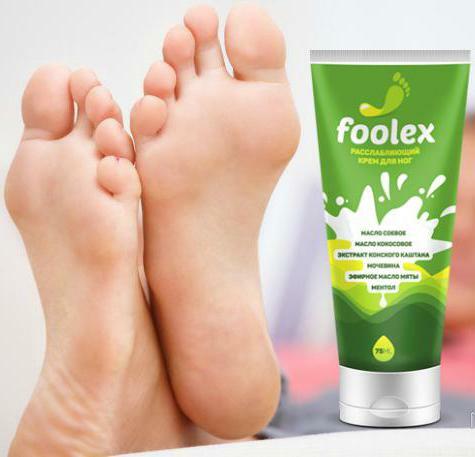 What do they say about the facility buyers?

Those who experienced the action of the cream "Fuleks" on themselves, were completely satisfied with the result. The remedy helped very quickly to eliminate cracks on the heels, soften the skin and make it smooth and tender. In addition, the cream has a pleasant aroma. It is economical in use and low in cost.

Another effective tool in the fight against dry and cracked skin of heels is balm "Dardia".It includes liquid paraffin, petrolatum, urea, corn starch, oleyl erucate, microcrystalline wax."Dardia Lipo Balsam" is used for moisturizing and softening dry skin, getting rid of cracks, as well as after completing the course of treatment of allergic dermatoses. The product does not contain alcohol, preservatives, perfumes, dyes, proteins, ethylene oxide products, as well as animal and plant extracts. 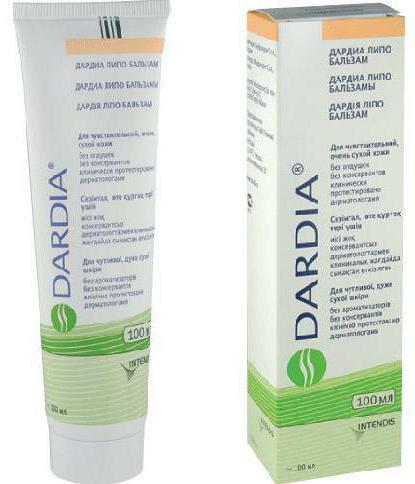 How effective is "Dardia Lipo Balsam"?

In order to get an answer to this question, it is worthwhile to turn to the customer's feedback. What are the advantages and possible disadvantages they note? The main advantages of this tool are the following:

In addition, "Dardia Lipo Balsam" can be used not only on the feet and heels, but also other parts of the body: elbows, knees, hands and so on. Do not satisfy consumers only a long absorption of the product into the skin. That's why it's a little problematic to use it twice a day( as recommended by the manufacturer).Although, as practice shows, one-time use brings the worst result.

This cream is made in the UK.It is intended for use by persons who have reached the age of 18 years. As the manufacturer promises, a positive result can be achieved after three days of use. The Scholl heel cracks enrich skin cells with keratin, which contributes to the early healing process of wounds. In addition, the product contains in its composition antiseptic, antibacterial and moisturizing components. 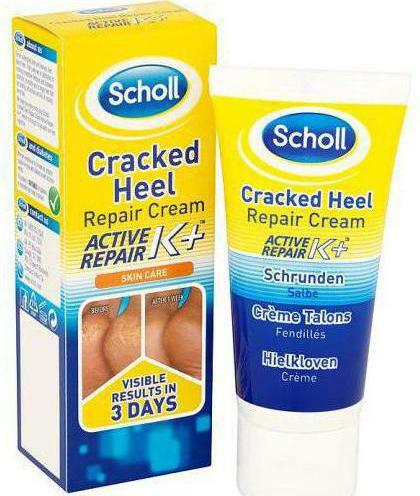 Manufacturer says that Sholl Cracked Heel Cream is a cream that regenerates the skin and heals cracks. Is this true? Unlike previous versions, which we reviewed, reviews about this product are very ambiguous. To some buyers, he helped get rid of problems with dry skin and cracks on the heels for the promised three or four days, while others did not notice any effect at all, even a week later. Therefore, the pros and cons should be combined into separate groups and consider each of them separately. So, the advantages of Sholl Cracked Heel Repair Cream:

The main disadvantages are the price, which significantly exceeds the average, a small tube of the drug and in some cases - a complete lack of effectiveness. The reasons for the latter are difficult to explain. It's possible that it's just the wrong use of the cream.

It perfectly softens rough skin, moisturizes it, heals fine wounds and relieves fatigue. Cream "Doctor", the price of which is rather low( up to 200 rubles), is able not only to heal cracks on the heels, but also to get rid of calluses, corns, flakes and coarsened skin. Its use is contraindicated in the presence of individual intolerance of its components. In other cases, the remedy is completely safe. 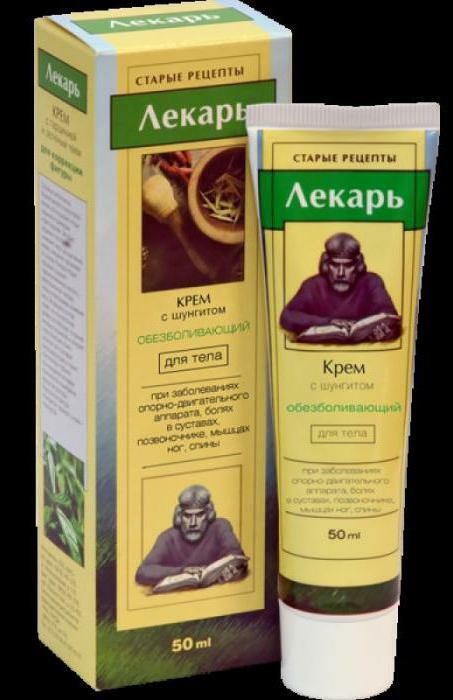 "Doctor" cream The main critic of any product is the buyer. It is he who determines the pros and cons of a particular product. What do consumers say about the cream "Healer"?Judging by the reviews, he has both advantages and disadvantages. Let's list the positive qualities of this tool:

But there are some disadvantages. Most often, buyers pay attention to the following:

In addition, in some cases, "Doctor" showed absolutely no effect. And the reasons for this are unknown.

Gel "Zazhivin" perfectly nourishes, softens and deodorizes the skin of the legs. In addition, it is very low cost, which is within 100 rubles. The composition of the product includes tea tree oil and milk thistle, sage extract, vitamin F, water, urea, propylene glycol, lanolin, ammonium salt of polymeric sulphonic acid, iodopropynylbutyl carbamate and perfume composition."Zazhivin" can be used to heal cracks and eliminate rubbing on the feet and feet. In addition, the gel is used as a disinfectant and a healing agent.

Pros and cons of gel "Zazhivin"

Reviews about the drug, left by buyers and pharmacists, note its pros and cons. Let's start with positive qualities. First of all, this is a high efficiency of the tool combined with its affordable cost. As practice shows, "Zazhivin" very quickly helps to get rid of cracks on the heels and gives the feet softness and tenderness. And thanks to a thick texture it is enough for a long time.

But there are a few shortcomings. First and foremost, consumers are confused by the need for constant use of the product. After all, the instructions indicate: "Use when there is a need".That is, the procedure must be repeated not only in the morning and in the evening, but also in the daytime. In addition, the drug has a slightly sharp and specific odor. The only plus - it very quickly disappears and is not felt on the skin.

In the article we learned what discomfort people are giving to the cracks on their heels. Causes and treatment of the problem with the help of special tools were also considered by us. As you can see, each of the above drugs has its own positive and negative qualities. Therefore it is very difficult to say which of them can be considered the best. In addition, in this respect, everything depends on the personal preferences of the buyer. After all, some are looking for an inexpensive, but effective drug. While others believe that a really high-quality tool can be bought, only giving a round sum for it.

Also, no one excluded the individual characteristics of the body. As we saw in the reviews, the same drug in some cases can help to achieve a very quick result, while in others it turns out to be completely ineffective. And it is impossible to influence this process, unfortunately. The only thing that can do people suffering from corns, calluses and cracks on the heels - contact the dermatologist. Based on his experience, the specialist will help to choose the most effective drug.