The secret of the effectiveness of traditional medicine in the use of only natural components available in the reserve from nature. One of such means - pine resin. The healing properties of this substance have been known for a long time, but in our progressive time people gradually forget about them. Given that this is quite affordable and at the same time very effective material, it is worth remembering in which cases gum resin is used and what is it generally. 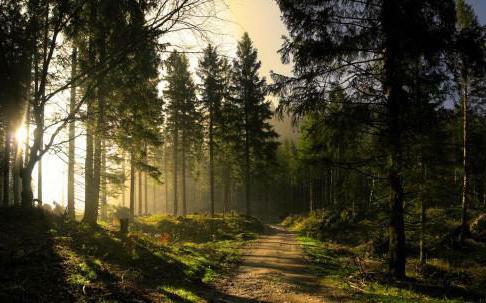 Everyone who has ever seen a pine nearby knows that trees can also cry. A broken branch, a crack from frost, a knife mark on the bark lead to the formation of a wound on the trunk of the tree. From this wound oozes a viscous transparent or somewhat yellowish liquid. This pine resin, the application of which is very broad, is called pine grease.

For a tree this juice has one meaning - healing. Soon after separation from the trunk, the resin hardens, the wound is covered with a film that does not allow penetration into pathogenic bacteria and fungi inside the tree. Zhivitsa can boast not only pine trees, but all coniferous trees: there are spruce, fir, larch greens, pine and pine oleoresin. The use of all these resins in the treatment, but still most often used is the pine bait.

For three quarters of the resin consists of resin acids. In their normal state, these acids are solid, but the gill remains a liquid, even if rather viscous. 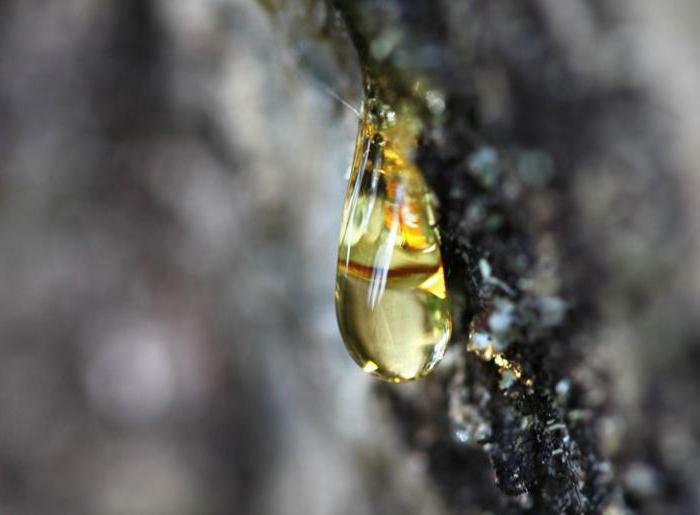 The secret of the form of the substance is that, in addition to the acids in the composition, there are terpenes. The share of these substances is 18% of the composition. However, they are so good solvents that this is quite enough.

This composition allows the resin to move along the strokes inside the tree. Sometimes zhivitsa accumulates inside the "resin pockets" - most often this happens with fir and spruce. In pines such pockets are much less common.

The official name of hardened pine grease is barris. Unofficially it is called gray. However, this substance has nothing to do with the chemical element "sulfur".

Pine pine, the medicinal properties of which are widely used, has in its composition a large number of various useful substances, including vitamins K, D, A, E, C, P, PP, vitamins from group B, iron, carotene,cobalt, manganese, calcium, copper, Phosphorus, nickel, vanadium, silicon, zinc, potassium, iodine, molybdenum and others.

Pine pine, the medicinal properties of the life-giving power of which were discovered in immemorial times, was used at the very beginning in small quantities. Then only the amount that nature itself offered to man was used. The state of things changed when industry began to develop.

The first thing that was used from pine is pine resin. It was used to mow down boats and, later, gear for ships and the wooden ships themselves. To get resin, used not the gum, osmol was more used - resinous branches and stumps, standing for a place of cutting down for more than one year. 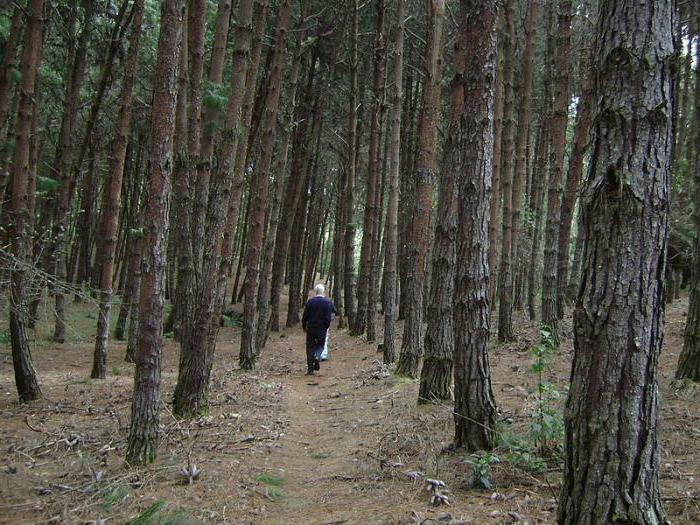 Fishing was developed in those areas where pine forests grew along the banks of rivers. In our country, the industrial production of resin began in the early 19th century. In this period, almost every peasant had a kind of "smolokurenny plant."However, the word "plant" had nothing to do with what is meant by it today.

At the beginning of the fishery, the "factory" was a semi-dugout equipped with a furnace, a cube for branches and stumps, and a tray for resin drainage. In the summer, they prepared the resin, in the winter they proceeded directly to forcing out tar. Given the lack of civilization, the work was extremely difficult, but still yielding income. During the inevitable colds, the healing properties of pine grease found their application.

In the spring time, a second-hand barker collected the ready-made resin. These barrels were put on rafts and descended along the rivers to big cities. From cities the resin was transported to St. Petersburg and to various shipyards. 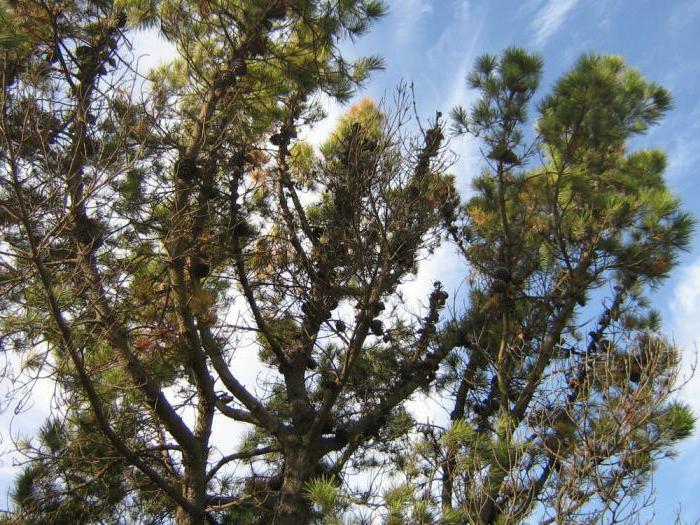 Harvesting of pine grease is called a bobbin. First of all, the bark is removed from the trunk portion. In particular, the funnel-shaped receiver is strengthened, into which the gum is collected from the dissected tree. The person who collects, bypasses the site and replaces all the filled containers. Wounds need to be renewed, as the sapwood hardens.

One tree usually collect 1-2 kg of gum, provided that the life of the tree is preserved. Many years of sapping lead to weakening of trees and even their death. Most often used trees are intended for cutting down. At present, in our country there are very few areas in which the extraction of useful resins is made. Trees are simply cut down, not trying to benefit from them. 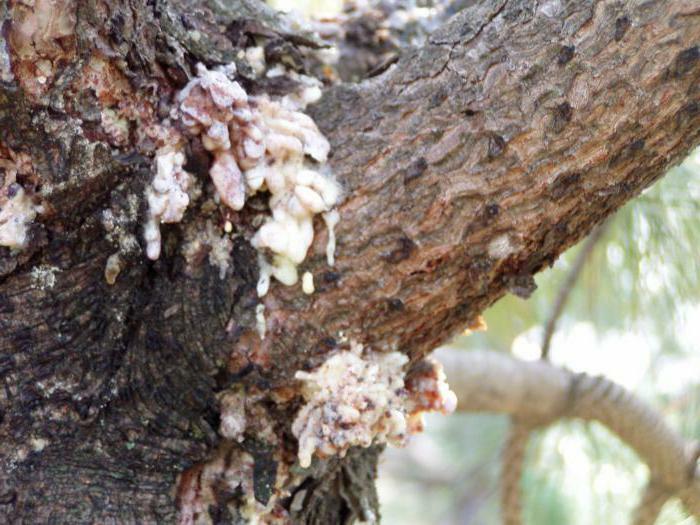 Modern enterprises have far gone from the first "factories" for the production of pitches. However, the principles of processing remain the same. By distilling dry or using water vapor from the turpent, turpentine is distilled. The substance remaining from the gum is called rosin. This substance is transferred for further processing.

The most famous application of rosin is the rubbing of bows. But in addition, it is necessary for tinning, in the production of plastics, cardboard, rubber, soap, rubber and other products. It is also necessary for the manufacture of medicines.

Pine resin, the application of which is currently not as widespread as before, is found in China, northern India and western Asia. The production of gum is made in Morocco, Turkey, Egypt, Japan, Italy and Algeria.

Pine pine, the medicinal properties of which have been used since ancient times, is an excellent antiseptic and has antibacterial properties. It heals wounds, relieves pain and relieves inflammation. Perfectly affects the festering wounds. Of course, grease ointment has an effect only on the consequence of the disease, as, for example, in the case of furunculosis - the gum is capable of "killing" only the boil itself, but will not eliminate the cause of the inflammations. To treat the disease itself, a doctor's consultation is necessary. In the same way, gum is used to treat various wounds and fungal diseases.

Gum treatment can be very enjoyable. For example, insomnia is removed from the bathroom, which is added about 2 grams of oleoresin.

When treating derivatives of turpentine - turpentine - you need to know that it is extremely toxic. It is necessary to strictly observe the dosage of the substance. When treating, it is important to count each drop in order not to exceed the required amount.

There is a so-called Zalmanov method, which involves the treatment of a large number of diseases with turpentine baths. Official medicine does not recognize the achievements of this method, however, it exists, as do the followers of the method.

Needle resin is a powerful natural antiseptic that stimulates the immune system, it heals and exerts an anti-inflammatory effect. The agent has not only external, but also internal application. Pine grease and its beneficial properties are used to treat a large list of diseases. Among others, gum is used to treat:
- burns, open wounds and boils;
- various heart diseases;
- diseases of the respiratory system;
- varicose veins;
- radiculitis;
- mastopathy;
- nervous disorders;
- internal parasites;
- impotence;
- vaginitis, cystitis, hemorrhoids.

In addition to the treatment with oleoresin, on the basis of which various medications are made, including oily vitamins, the derivatives of this substance are also used for medicinal purposes: rosin and turpentine. Purified turpentine can be found in the pharmacy - it is used for inhalation for various bronchial diseases.

Turpentine liniment is used for rubbing with muscle diseases and various inflammations of the joints.

Olimithine, based on terpentine oil, is used to treat cholelithiasis.

Pine pine, the medicinal properties of which are very important in folk medicine, has a beneficial effect on the human body. In addition to the immediate problem for the sake of which treatment has been initiated, the zhivitsa helps reduce the impact of the disease on other organs, preventing the occurrence of new problems. 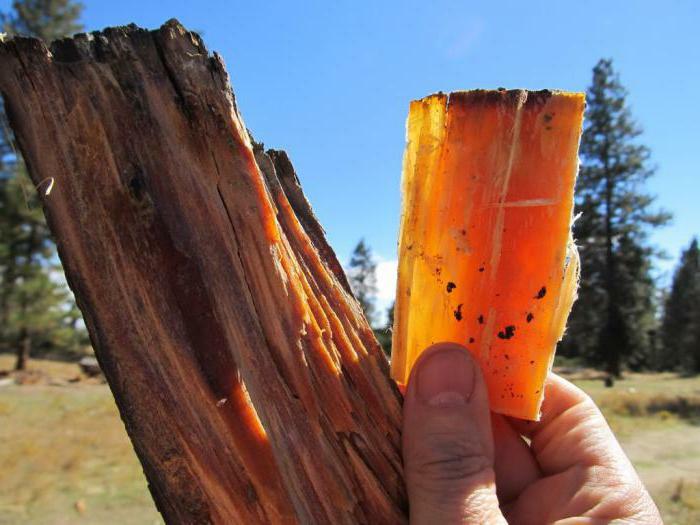 The use of resin inside is possible in the form of decoctions, sucking candies and similar products. Apply one half teaspoon to an empty stomach.

For external use use lotions and rubbing. It is recommended to mix crushed gum with olive, sea-buckthorn, vegetable oil. This mixture is heated in a water bath. To achieve a greater heating effect, honey is added to the resulting ointment.

Despite the large field of application and the huge amount of useful properties of the resin, it is necessary to make sure that there is no allergy or an individual intolerance to the product. To test how the body reacts to the drug, you need to make a carp test, watching it for less than a day. If the place of application is covered with a rash, reddened or other negative signs appear, the use of pine grease is prohibited.

Pre-school children and pregnant women can not use this substance inside.