The drug "Nimesil" and alcohol - is this combination possible? Consequences of admission and recommendations

The issue of concurrent use of alcoholic beverages with medicines is often widely discussed by patients. Surely everyone knows that antibiotics of different kinds are forbidden to combine with alcoholic beverages. However, not many think about whether it is possible to take non-steroidal anti-inflammatory drugs( for example, Nimesil) and alcohol. This article will tell you about it.

Before you figure out whether such a combination is possible, it is worth saying a few words about the drug itself. The medicine "Nimesil" comes in the form of a powder. It is necessary to prepare the suspension before use. The composition has an analgesic, anti-inflammatory effect. Also, the drug helps to eliminate fever. Many consumers take it on their own with dental pain, migraine.

There are people who say that "Nimesil" with alcohol is possible. After all, it is this drug that they save themselves from hangover syndrome. Is this combination safe? Let's try to understand this issue in more detail and consider several points of view on this matter. 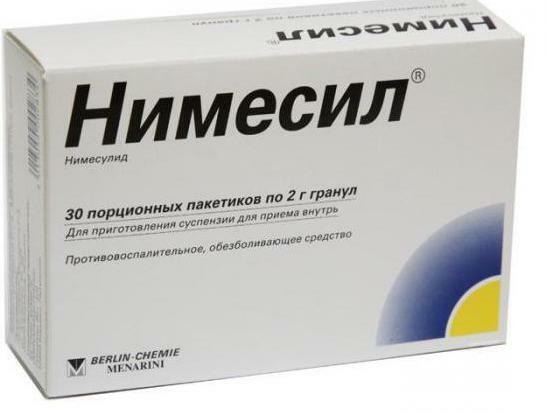 Is Nimesil with alcohol possible? What information does the annotator present on this subject? The instructions for use do not indicate any data in this regard. The manufacturer does not say that after the simultaneous administration of the drug and alcohol, there may be some undesirable effects.

Indeed, many drugs imply a ban on drinking alcoholic beverages because of the likelihood of developing disulfiram-like reactions. From the simultaneous use of alcohol and medicine "Nimesil" this effect is not expected. 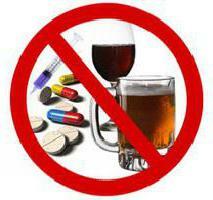 Influence on the liver

The medication "Nimesil" and alcohol should not be combined because of the negative effects on the liver. It passes through itself all harmful substances, thereby protecting other vital organs. The liver can eliminate small amounts of alcohol without any consequences. However, if you simultaneously take the described drug, then there will be a completely different reaction.

"Nimesil" medication can have a hepatotoxic effect. This is indicated in the annotation. That is why the manufacturer does not recommend exceeding the specified dose of the drug. With such an effect on the liver( together with alcohol), the body simply begins to break down. Hepatic tissue in some areas is replaced by a connective tissue, which has its consequences. Therefore, do not be so careless about your health and take the drug "Nimesil" and alcohol in one day.

As you already know, some people after drinking alcohol do not feel very well. Hangover syndrome manifests most often headache, fever, general weakness and other signs. Is it possible to take advantage of the described medication in this situation to improve your health?

If after the last glass of alcohol before taking the medicine it took at least 12 hours, then this combination is acceptable. Some set a break of only 6 hours. However, everything depends on the strength and the dose of alcohol taken. To protect yourself from the negative influence and destruction of the liver, you should prefer safer formulations( "Aspirin", "Ibuprofen"). 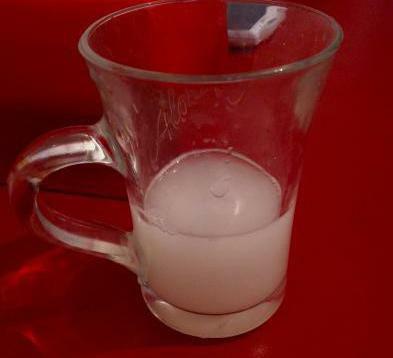 Which, according to experts, have "Nimesil" and alcohol compatibility? Doctors say that such a combination is unacceptable. In addition to the harmful effects on the liver, you can still and just not get any healing effect. All because of the fact that alcohol can block the effect of many drugs.

Medication can also manifest itself in a completely unexpected way. Instead of anesthetizing and relieving fever, you will get acute diarrhea, dehydration, abdominal pain and other unpleasant consequences. To avoid this, refrain from the simultaneous use of alcoholic beverages and the drug "Nimesil".If necessary, consult a doctor for help.

What else can be said about such a combination as "Nimesil" and alcohol? How much can you take this medicine after drinking alcohol?

Some patients say that they took the medicine simultaneously with alcoholic beverages. As a result, nothing terrible has happened. In addition, the medicine was fully effective, as expected. Indeed, someone may not notice the negative effects of the combination described. However, it is worth remembering that the body of each person is individual. The state of liver health can also vary from person to person. There are officially registered cases when the use of "Nimesil" with alcohol led to a hepatic coma. So do not experiment on yourself. Choose what is more important to you - a medicine or alcohol. 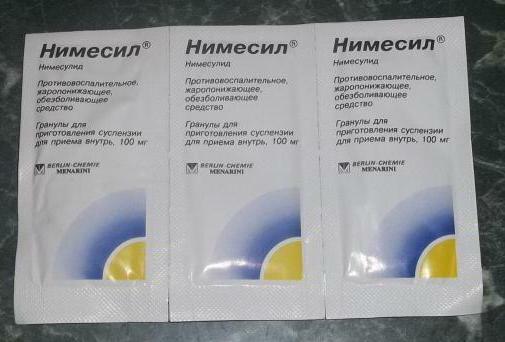 You have learned about whether it is possible to combine treatment with Nimesil and alcoholic beverages. If it happened that you drank alcohol, but you need to take a medication, then you should wait for the complete withdrawal of ethanol from the body. This may take several hours to a day. If you urgently need to use an antipyretic agent or an anesthetic, call for emergency help. Be sure to tell the doctors about what you drank and how much. Based on this, doctors will take further action. I wish you success!