Sometimes a person can live half the life without even suspecting that hidden threats can hide in his body, for example, a teratoma, an anomaly in the development of the kidney or the coccyx cyst. The latter does not manifest itself in any way until a certain time, and doctors can not exactly say what the appearance of clinical symptoms is due to. At some point this formation starts to become inflamed, pus is formed, melting soft tissues, and the problem becomes obvious.

The pyloridal cyst is an anomaly of skin development in the sacrococcygeal region. Synonyms for this diagnosis are the pilonidal sinus or the epithelial coccygeal passage. To think about this disease may be the presence of skin entanglements in the inter-saline fold. After traumatizing the coccyx or supercooling of this area, the fistulous course becomes inflamed and inflamed. After some time, it somehow opens, forming additional fistulous passages and openings. If you do not resort to medical care, the disease is recurrent. 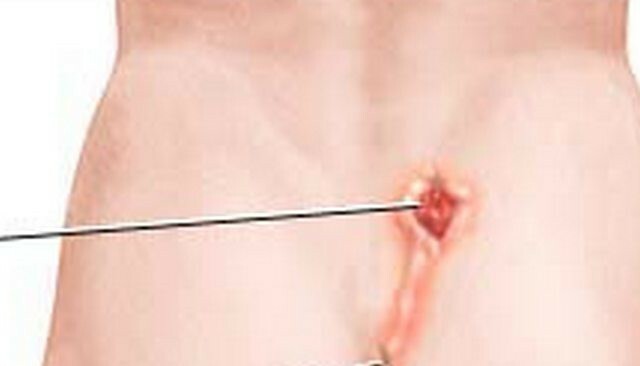 The international classification of diseases of the tenth revision has a section under the letter L, which, among other things, collects diseases of the skin and subcutaneous tissue. The cyst is pilonidal coded under the code L05, it includes the fistula of the coccygeal and the pilonidal sinus. There are two subgroups:
- L05.0 - cyst with abscess;
- L05.9 - cyst without an abscess.

This section also includes bulls, dermatitis, eczema, urticaria, diseases of the appendages of the skin and others.

Reasons for the formation of the 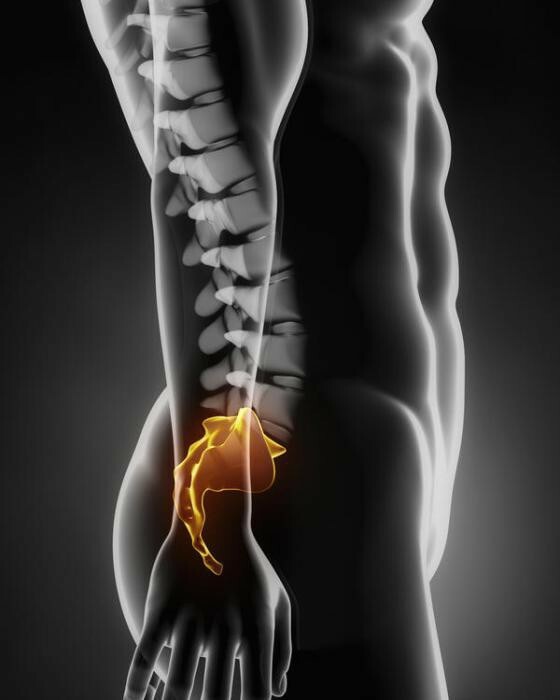 cyst As is well known, the embryo undergoes evolutionary stages during growth. He has a large head, a three-chambered heart, membranes and even a tail. Most doctors and pathomorphologists believe that the pilonidal coccyx cyst is a congenital defect of the external embryonic leaf. This is due not to the end of the reduced muscles and ligaments of this very tail, which appears in the first weeks of gestation and should disappear after the eighth week.

There is another opinion on this issue. Some experts believe that the disease occurs due to ingrown hairs in the subcutaneous fat. Adherents of this theory indicate the presence of epithelial passages between the fingers of hairdressers, in the cult of an amputated limb, in the axillary region.

More than a hundred years ago, neurologists proposed a theory that the epithelial coccygeal path is formed during the involution of the end segments of the spinal cord. Another explanation of how the pylonidal cyst is formed is in tune with the previous one: the coccygeal vertebrae, which form a tail in animals, dissolve, and in their place remains a rudimentary ligament. If this process is not completed completely, then a blind move is formed at this place, which can become inflamed. 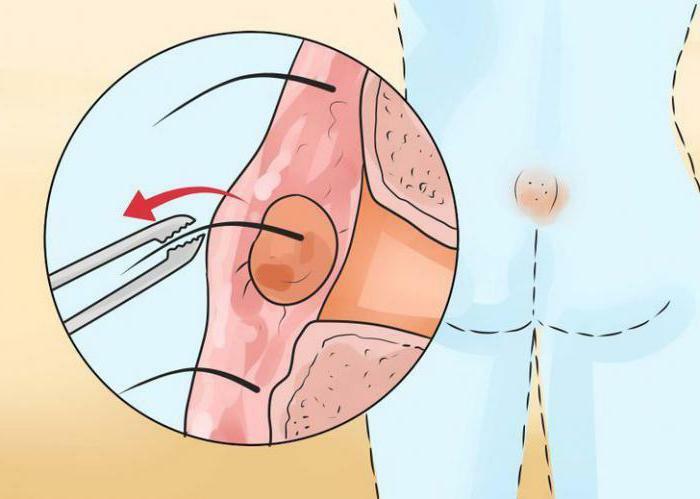 The main age of patients with a diagnosis of "pyloridal cyst" - from sixteen to twenty-five years. Representatives of southern nationalities are most often affected. The disease is practically not found in the Negroid race. The most common are men who drive a lot or make long walks, such as soldiers or truckers.

The epithelial motion is located along the middle line in the inter-saline fold, it blindly terminates in fatty tissue, and opens on the skin in the form of a wound. In the section is a narrow tube up to three to four centimeters long. Inside it lining the epithelium, which secrete mucus. Any mechanical trauma or infection can lead to a delay in the outflow of epithelial secretion and inflammation. The pilonidal cyst is nothing but an inflamed fistula, which, with a high degree of probability, can go into an abscess. In neglected cases, it reaches a significant value and can spontaneously open, melting the skin. This is a very painful process, which can significantly complicate life.

Distinguish uncomplicated and complicated epithelial coccygeal passage. In the first case, as a rule, there are no complaints. Sometimes there are dull pains in the coccyx region, but they do not cause trouble for the patient and arise only with prolonged sitting or light injuries. Rarely, the pilonidal cyst is accompanied by itching and secretions in the interannual fold.

If the course of the disease is complicated, then an acute or chronic inflammation of the epithelial course is observed, an increase in body temperature, severe pain in the abscess, cicatrical changes occur at the site of the healing fistula. This usually worries patients and forces them to consult a surgeon.

It is important for the doctor to correctly and in detail collect the anamnesis. Most often, the patients are treated after an injury or when the pain is pronounced. The presence of holes in the interannual area, inflammation at the site of the scar, a constant recurring course of abscesses makes the diagnosis quite easy.

In order to find out how many holes there are and how far the fistulous passage deepens, the doctor injects a dye into it, most often methylene blue, and then watches where the liquid will flow. This method allows you to visualize all the deposits of pus and completely remove them during the operation.

Treatment of an uncomplicated cyst 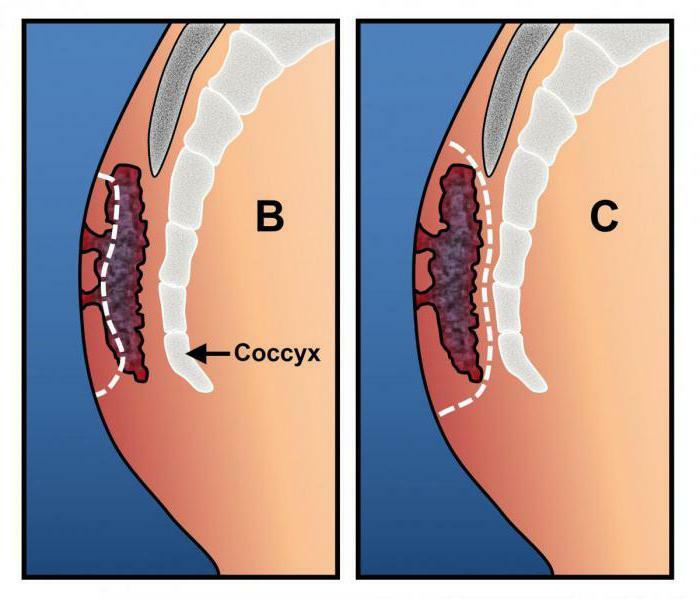 A pilonidal cyst without abscesses requires a routine surgical treatment, the time and method of which is chosen individually for each patient. The general rule is only one: the intervention must take place during the remission of the disease. Radical operation is necessary in the event that purulent discharge has appeared from the external opening. The surgeon performs excision of the skin flap along with the subcutaneous tissue, right up to the sacrococcygeal fascia. In order to facilitate access, the epithelial passages are stained with iodine, fucorcin, or methylene blue. The wound is sutured layer-by-layer tightly or( with a deep or extensive lesion), hemming the edges of the wound to its bottom. Sutures are removed after two weeks, no significant cosmetic defects at the site of the incision are observed. With careful care, the disease is cured completely.

Treatment of a complicated cyst 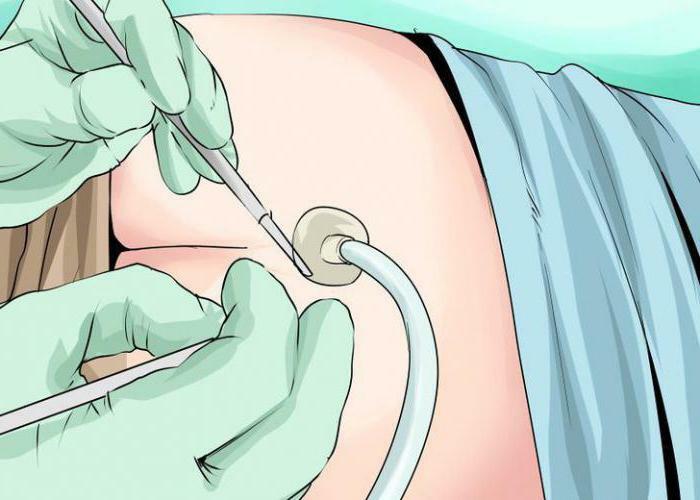 A pilonidal cyst with an abscess requires a slightly different approach to treatment. If the inflammation does not go beyond the interannual fold, has a diameter of not more than three centimeters and is located strictly on the canal, it is possible to carry out one-stage radical intervention and completely remove the focus of inflammation. In the case of dissemination of the infiltrate, an anti-inflammatory therapy is necessary before the operation.

When abscessing( i.e., spontaneously breaking through the contents of the abscess), it is also preferable to perform anti-inflammatory therapy first, so that the interannual region becomes available for surgery, and also to reduce the risk of postoperative complications. Delayed radical stage has a number of advantages:
- economical cut on the skin;
- maximum approach of the edges of the wound.

Even if the infiltrate spreads to the sides, the main object remains the pilonidal coccyx cyst. The operation is done along the midline of the abscess. After access, the surgeon inspects the wound to remove all necrotic masses and sever the tissue webs, if any. Prevention of relapse consists in a thorough examination of the operating field, the removal of all necrotic detritus, excision of strokes and streaks. Repeated inflammation is possible if the surgical intervention was not radical enough, the remnants of the epithelial passage remained, the hair or wound healing did not completely occur.

Service in the army

During the passage of the draft commission, the surgeon discovers a point attraction alongside the anus with the hair protruding from it. In the specialist this causes certain fears, so the young man is asked leading questions: whether his itch is worried, if there are purulent discharge, whether there were inflammations. If the answers are negative, the doctor gives recommendations on hygiene and notes that the soldier is good for the service.

But if at least one of the questions is positive, then surgical treatment is required, because there is no conservative therapy. Intervention is carried out in a planned manner, if there is no indication for emergency action. 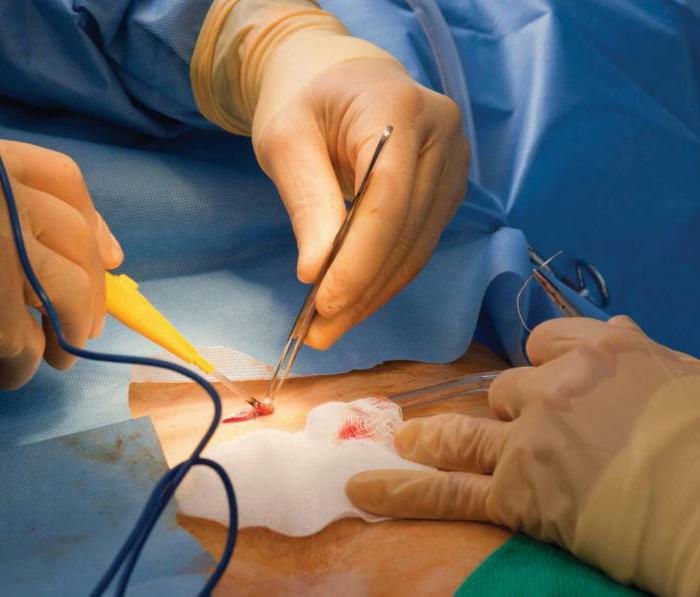 The pyloridal cyst requires delicate postoperative care, so patients are advised to follow the recommendations below:
- three weeks after surgery, it is not allowed to sit and lift weights;
- it is necessary to take a warm hygienic shower daily with the washing of the interannual area;
- within six months after the operation, every two weeks, you need to remove the hairs in the cut zone;
- wear soft, non-compressive underwear, without protruding seams.

The correct approach will avoid relapse of the disease and will facilitate the conduct of audits in the future.

As a rule, the pilonidal cyst, which is treated only promptly, has a favorable prognosis, often a complete cure occurs. Unfortunately, sometimes complications are possible, such as:

- repeated abscesses( if the audit was not performed completely);
- recurrence of the disease( if the patient does not follow recommendations for conducting postoperative treatment);
- sepsis and septicopiaemia( when a secondary bacterial infection joins);
- degeneration of epithelial tissue tissues into squamous cell carcinoma.

The last complication is extremely rare, but surgeons like to hedge in this case and the remote tissues are sent for histological examination in order to exclude oncological pathology.