Gout is a disease that provokes the formation of deposits on the joints and bones. Often, the ailment is chronic. Externally, the deposits may not be particularly noticeable. However, a patient with such a disease can feel a sense of discomfort. Often the patient has sharp pain attacks and the temperature rises significantly.

Recently, a variety of ointments have been used for gout during an exacerbation. Ready-made preparations can be purchased at the pharmacy. But there are recipes for ointments against the disease and in folk medicine. In this case, the preparation can be prepared independently. What ointments are used against gout? 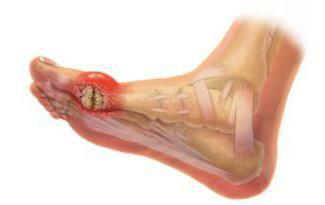 Gout is an insidious disease that gradually destroys the tissues of the joints. There is such an ailment as a result of the disturbance of metabolic processes in the body. As a result of this phenomenon in the tissues, uric acid begins to accumulate in large quantities.

The first is affected by the joint of the big toe. It is manifested by its gradual deformation. In this case, the patient experiences severe pain resulting from degenerative processes. In addition, the mobility of the joint is limited. Skin covers in the affected tissue become a purple hue. Painful sensations intensify at night.

Features of therapy for the disease

Many physicians recommend using ointments when symptoms of ailment develop. If the treatment is not timely started, the structural component of the joint will gradually begin to deteriorate, which will lead to undesirable consequences. Most often, a neglected illness leads to disability. 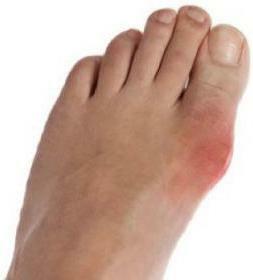 When treating a disease such as gout, an integrated approach is applied. Usually, experts prescribe not only ointments for topical application, but also special medicines in the form of tablets, as well as a variety of physiological procedures. Only in this way can we overcome the disease and get a positive result.

As for ointments, they are designed to relieve the pain syndrome, as well as the inflammatory process, localized in the affected joint and tissues near it. Such drugs have only a local spectrum of effects. Ointments quickly penetrate into the skin, and then into tissues affected by gout. However, they need to be used in combination with other medicines, as they are not effective when used alone.

"Diclofenac" is an ointment for gout, which is most often prescribed. The popularity of the drug can be explained by several factors:

The main active ingredient in this drug is diclofenac sodium. This component can significantly improve the patient's condition, as well as eliminate the main symptoms of the disease. The drug is topical if the gout is very hard. Ointment, the treatment of which can be carried out at home, is applied to the joint and evenly distributed. Apply a small amount of the drug should be up to three times during the day.

This ointment from gout has a unique and completely natural composition. To prepare the medicinal product "Fullflex" a plant base is taken. This is one of the best ointments for gout. The composition of such a medicinal product includes birch bark, tamolga vyzolistna, bark of horse chestnut and willow, fragrant martinia. In addition, essential oils of juniper, sage and eucalyptus are used. The drug has many properties:

"Fullflex" is a safe drug that has no contraindications. For its manufacture, only plant components are used. For this reason, ointment is often prescribed to pregnant women suffering from gout. Even with a developed form of the disease, the drug can significantly alleviate the patient's condition and eliminate the symptoms of the disease and prevent its further development.

To remove inflammation and pain, Indomethacin

What ointments are prescribed for gout? With such a disease, it is recommended to use the gel "Indomethacin".It is a non-steroid drug that can remove puffiness, eliminate inflammation and relieve pain. It is enough to rub a small amount of the drug daily into the affected area. The procedure should be up to 3 times a day.

Despite the effectiveness, such ointment from gout has side effects, among which:

Very often this ointment is prescribed from gout on the legs, traumatic vascular disease, bursitis, arthritis, problems with ligaments and muscles. The drug "Bystrumgel" is manufactured by a Russian company. This drug has an anti-inflammatory effect.

A small amount of ointment must be squeezed out of the tube, and then gently applied to the problem area. The drug should be carefully distributed. It is recommended to conduct such a procedure up to three times a day.

This is another popular ointment. When the gout worsens, there are strong painful sensations. To eliminate them, the doctor can prescribe the ointment "Dolgit", which is made on the basis of ibuprofen. This drug significantly reduces the swelling of the tissues, relieves the inflammatory process in the joints, and also returns the patient the opportunity to move normally.

It should be noted that the drug "Dolgit" is often prescribed for the treatment of gout in pregnant women. It can also be used in the treatment of illness in children older than 14 years. Like most ointments, Dolgit should only be used externally. It is enough to apply a small amount of cream on the diseased area and evenly distribute. During the day, up to four such procedures are required.

The course of treatment with ointment "Dolgit" should not exceed 1 month. If the improvement does not occur, the doctor can prescribe a change of the drug. 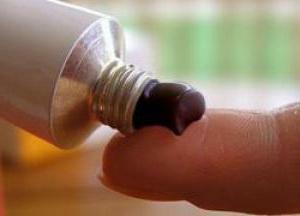 To eliminate pain in gout, many doctors recommend using butadione ointment. It is an anti-inflammatory non-steroid drug that enhances the mobility of the affected joint. This ointment from gout alleviates the feeling of discomfort and calms the pain.

During exacerbation it is recommended to apply butadione ointment on the inflamed joint, gently and evenly distributing it. A small amount of the drug is enough to eliminate pain. It is recommended to conduct the procedure twice within 24 hours. Do not rub the ointment. After its application it is necessary to impose a gauze bandage. The treated area should be protected from direct sunlight.

For the treatment of gout liniment is used - it is a more liquid ointment Vishnevsky. Such a consistency of the drug allows it to be distributed more evenly over the affected area. Due to this, the patient, when using the medicament, practically does not touch the patient's joint without provoking pain. The composition of the medicinal product includes:

Why does gout disappear? A good ointment from this ailment is Vishnevsky's ointment. Thanks to its composition, you can remove the symptoms of ailment. With complex therapy, you can relieve exacerbation. Ointment Vishnevsky has unique properties. This preparation:

For gout therapy, a small amount of Vishnevsky ointment should be applied to the affected area, evenly distributing it. After this, it is recommended to apply a bandage to the treated area and fix it with a bandage. It is necessary to conduct such a procedure up to three times a day.

Ointment Vishnevsky with gout is recommended to use courses, as a one-time application does not completely remove the symptoms of the disease. In addition, the drug has contraindications. Such a drug should not be used by those who suffer from kidney failure, provoked by gout. It is for this reason that it is worthwhile to consult specialists before using Vishnevsky ointment. Self-medication in this case can only aggravate the patient's condition.

Ointment Vishnevsky can cause the development of side effects, among which:

If any side effects occur, discontinue use of the drug and consult a specialist. Do not self-medicate and choose your own ointment when exacerbating gout. Incorrectly selected medication can cause development of undesirable consequences.