Frantiskovy Lazne( German Franzensbad) - a small resort town near the town of Cheb in the west of the Czech Republic. The city is located near the border with Germany. Together with the neighboring Mariánské Lázně and Karlovy Vary, it forms the famous Western Bohemian SPA triangle. The historical center of the city is a candidate for inclusion in the UNESCO World Heritage. 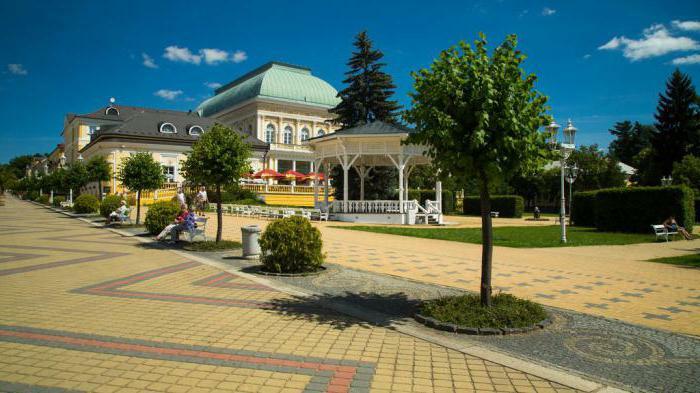 The population of Františkovy Lázně is 5355 people. The distance from Prague is 200 kilometers.

Františkovy Lázně is known worldwide as a SPA resort. The curative effect of local sources is known since the end of the 14th century. George Agricola( 1494 - 1555) in his writings speaks of the water that the inhabitants of Cheb drink. According to the laws of the time, water from sources brought to the city was used for charitable purposes. Later, this water was poured into clay bottles for sale. In 1700, mineral water from local keys was sold more than all the resorts of the empire combined. Around 1705 on the site of a mineral geyser known as Franzenskvelle, a hotel was built. 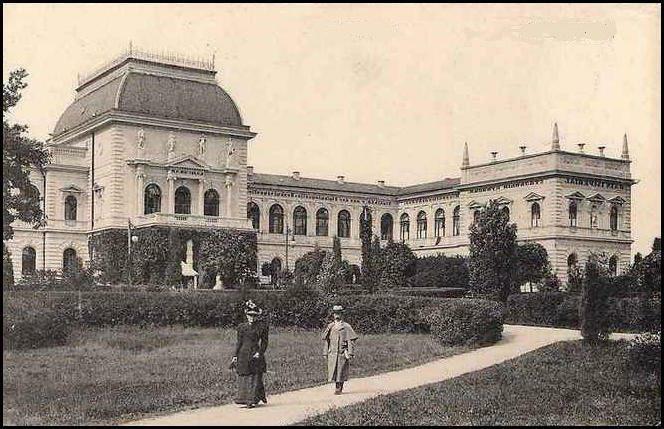 The modern city was officially founded in 1793. At the time of the Emperor Francis II it was called the Kaiser Franzensdorf, later it was renamed Franzensbad. Under this name, he became famous. The

SPA center was founded by the physician Bernhard Adler( 1753 - 1810), which facilitated the transformation of marshland with trails and footpaths to a famous spa. He promoted the expansion of existing facilities for those who sought healing.

In 1791 in Franzenskvelle Dr. Adler built a new pavilion and a swimming pool. This he provoked discontent among the numerous women who earned their living by mining, transporting and selling mineral water in Cheb. Not wanting to lose their source of income, they fiercely resisted the doctor's plans and eventually destroyed his building. The city council took the side of the doctor and assisted in restoring and transforming the premises into a sanatorium. A magnificent recreation area was established and transport links with the city of Cheb were established. 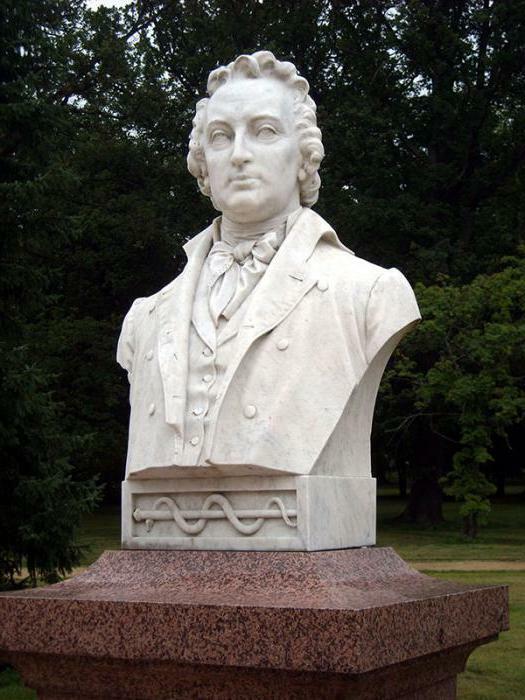 Johann Wolfgang von Goethe was one of the very first known guests. His visits to Frantsensbad with Johannes Urzidil ​​were described in detail in the book Goethe in Böhmen. Also one of the first visited this resort was Ludwig van Beethoven, accompanied by Antonia Brentano and her family.

In the 19th century, numerous aristocrats, especially Russian noblemen, were patients of famous doctors practicing here, thus strengthening the reputation of Frantiskovy Lazne( Franzensbad) as an exclusive resort. The world's first peat bath was opened in Františkovy Lázně, the reviews were the most enthusiastic. Among the ladies she was very popular. 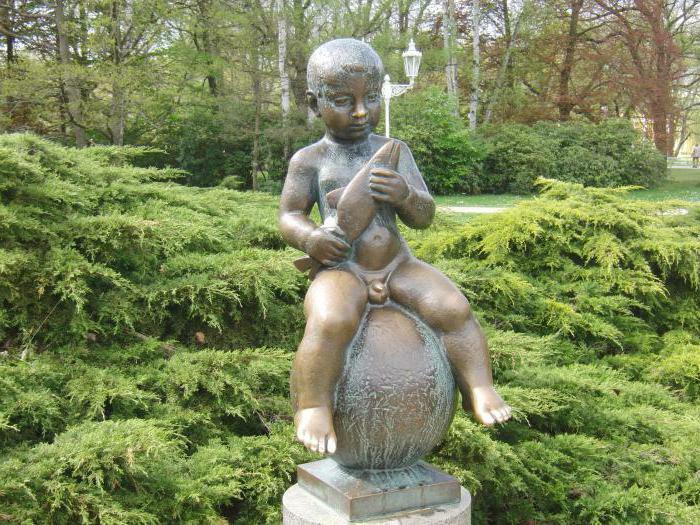 Among the other distinguished guests were Theodore Herzl, the Emperor Francis Joseph I and the Archduke Charles I.

After the First World War, the resort began to lose its prestige. As part of the new state of Czechoslovakia, the health resort lost many of its guests and was badly affected by the Great Depression of 1929.

After the Second World War, the German and Hungarian population was expelled from Czechoslovakia, deprived of citizenship and property in accordance with the decrees of Benes. Many of them settled in Bayreuth in German Bavaria.

SPA objects were nationalized under the influence of the Communist Party. After the Velvet Revolution of 1989, a joint stock company was established, which sought to improve the status of the Frantiskovy Lazne and make it more attractive to foreigners. 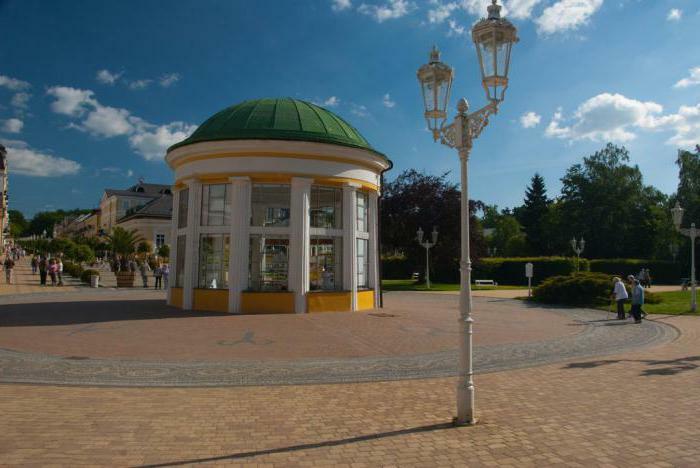 Natural water from local springs has a unique composition - it contains a large volume of carbon dioxide and sodium sulfate. High effect of carbonic baths is observed in the treatment of cardiovascular diseases, chronic inflammatory processes in the body, rheumatism. Adoption of mineral baths improves blood circulation in tissues and promotes autonomic stabilization.

The mud bath has a thermal, chemical and mechanical effect, this is a traditional medical method. The combination of curative mud and mineral water is heated to a temperature that is significantly higher than body temperature. Treatment has a positive effect on muscle pain and mobility.

The local spa corporation is the largest in the Czech Republic.

Types and methods of sanatorium treatment In Františkovy Lázně the treatment is based on the main SPA-procedures, during which natural healing resources are used: 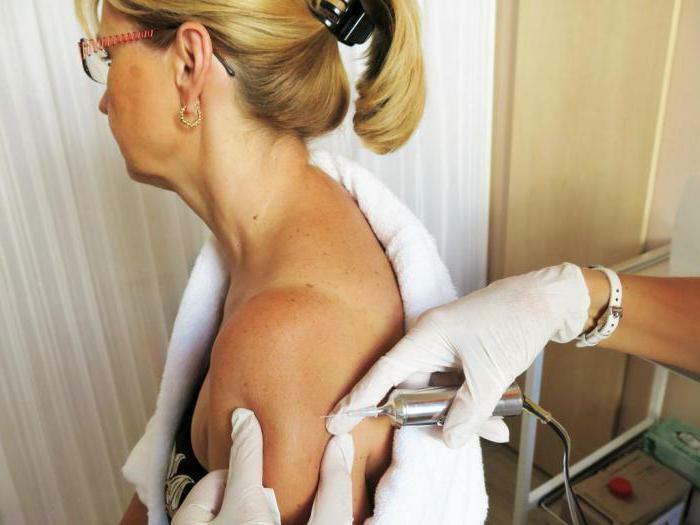 The permission of the Ministry of Health of the Czech Republic uses natural medicinal resources - mineral water and peat from local deposits.

The peat, which is used for wrapping, comes from the region of Frantiskovy Lazne. It is sulfur-trivalent peat with a large share of reeds. It is used in a crushed form mixed with water, which heats up to 42-43 ° C.Minerals contained in peat penetrate the skin. High temperature increases blood circulation in the body, and also improves metabolism, which accelerates the absorption of inflammatory infiltrates and relaxes both skeletal muscles, as well as smooth vascular muscles. The procedure time is 20 minutes.

For baths with carbon dioxide, natural mineral water is used from the source of Stephanie. The water temperature is 33 to 34 ° C, it is a hypothermic bath. The sensation of cold disappears after a few seconds, when the bubbles of carbon dioxide create a continuous film on the surface of the skin. Carbon dioxide is absorbed by the skin and causes a chemical reaction in the body, first dilating the blood vessels near the surface of the skin, and then deep blood vessels. In general, the reviews indicate that blood perfusion improves, blood pressure drops. Mineral baths are used, among other things, for diseases of the musculoskeletal system, gynecological and urological disorders. The procedure time is 20 minutes. 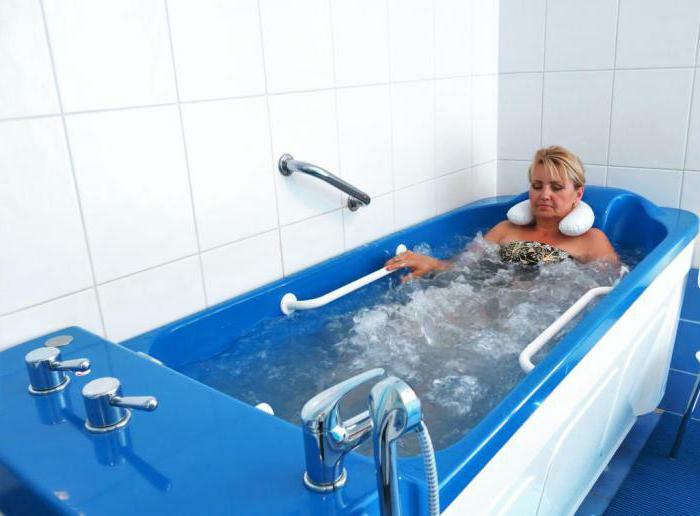 The peat that is used for the bath comes from the area of ​​Františkovy Lázně.It is sulfur-trivalent peat with a large share of reeds. Peat is added to the mineral water from the source of Stephanie. During bathing, the whole body heats up. After the bath, the patient feels relaxed. Patients' reviews contain information that the mud bath effect is also analgesic, bactericidal and virucidal. Duration - 20 minutes.

This is a bath for the whole body, the temperature fluctuates between 36 and 38 ° C.Circulation of water and air flows leads to massage, improves blood supply to the limbs, improves metabolism and stimulates skin cells. Hydromassage helps cure lymphatic tumors, rheumatic diseases and post-traumatic conditions. Also useful for patients with muscle atrophy, peripheral paralysis and diabetes. Duration - 20 minutes.

Gas injections are a type of reflexive therapy. Used medicinal 100% carbon dioxide, which is injected under the skin in a maximum amount of 200 ml per session. The initial effect may be uncomfortable or even painful, but after a few minutes it turns into a pleasant, warm feeling. The skin around the injection site turns red for a short time. Reviews suggest that carbon dioxide causes the expansion of small blood vessels, which in turn leads to muscle relaxation and pain relief. Repeated applications improve the nutrition of tissues. 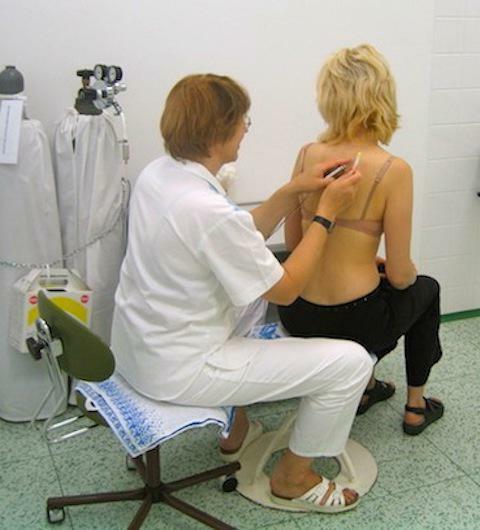 The procedure is carried out in a sitting position. The legs and part of the body below the patient's waist are in a plastic bag filled with medicinal 100% carbon dioxide. Gas quickly penetrates the skin, even through clothing. There is an expansion of the blood vessels, first at the surface of the skin, then deep. As the patients say, thanks to this effect, blood pressure throughout the body falls, blood supply to the lower extremities improves, inflammatory manifestations decrease. An increased level of carbon dioxide positively affects the function of the kidneys. The effects of a dry bath with carbon dioxide are almost identical to the effects of a mineral bath, so this treatment is suitable even for people with skin diseases. The procedure lasts 20 minutes.

Ultrasound converts electrical energy into mechanical and thermal energy, thereby massaging tissues at the micro level. Frequencies between 0.75 and 3 MHz allow for targeted treatment of deep subcutaneous structures. This leads to improved perfusion of blood and nutrition of tissues, relaxation of muscle contractures, softening of scars and reduction of edema. According to reviews, for musculoskeletal disorders, the effect of ultrasound is analgesic and anti-inflammatory. Duration - up to 10 minutes.

Mineral water is used for inhalations, which improves the respiratory mucous membrane function of the respiratory system. Water is effective against inflammation, dissolves phlegm and relieves cough. If there is a severe difficulty in breathing, medicines can be added to the water. In normal cases, natural salts or plant extracts are added to the water. The procedure lasts no more than 10 minutes.

During their stay in Frantiskovy Lazne, the hotels offer a wide range of health-improving balneotherapy procedures. 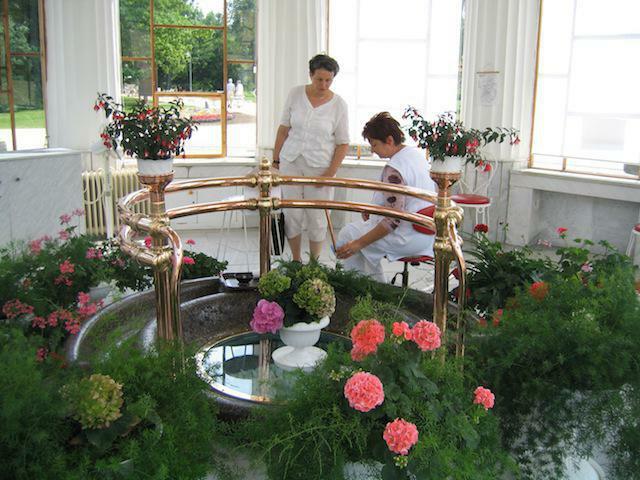 Usually the duration of treatment is 21 or 28 days. Therapy is prescribed to patients by their physicians. The duration and content of therapeutic procedures is determined by the medical staff of the sanatorium on the basis of the examination of the examinee upon his arrival at the SPA center. The doctor appoints the exact composition of water-drinking treatment and SPA-procedures.

The trip here is indicated for diseases of the cardiovascular system, gynecological diseases, hypertension, metabolic and endocrine gland disorders, diseases of the musculoskeletal system. 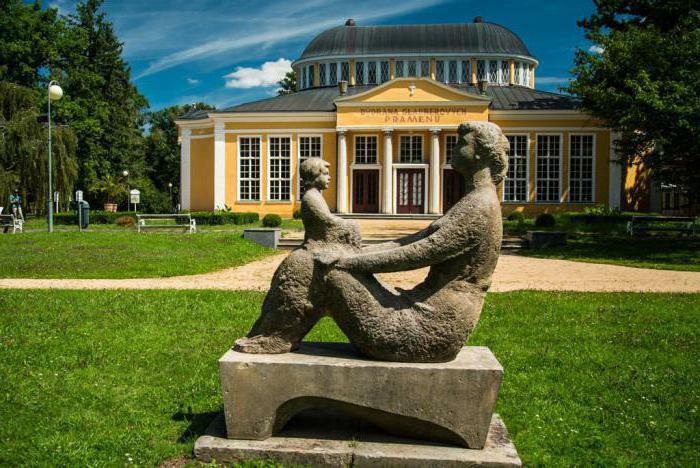 Almost all the sanatoriums of Františkovy Lázně( Czech Republic) have mineral springs on their territory. The water temperature in them is from 9 to 11 ° C.Of the 21 sources part is used for drinking, and others - in various SPA-procedures. Numerous springs can be found in the colonnades and pavilions located in the SPA zone.