Caries is a terrible disease. But doctors have developed an effective way to combat this disease. What is the classification of carious cavities in Black? Let's consider this issue in more detail.

"Caries" from Latin translates as "rotting".This is an intricate pathological process, sluggishly flowing in the solid tissues of the tooth. Usually it develops due to the complex influence of harmful internal and external causes.

At the initial stage of development, caries is determined by the destruction of the organic matrix of enamel and the focal demineralization of its inanimate part. Later, the hard tissues of the tooth decay, cavities appear in the dentin. If the patient does not seek medical help for a long time, inflammatory complications from the periodontal and pulp may appear.

The first version of

What is the Black classification? This is a grouping of carious formations on the tooth surface. It was introduced in 1896 to determine the standards of healing in each individual clinical case. 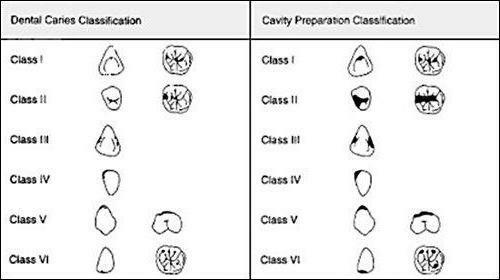 This classification includes five classes, each of which has its own scheme for tooth filling and preparation. A little later, a sixth class was added to this system. Today it looks like this:

Black's classification of caries localization is presented in several versions. The second modification is as follows:

The third version of the

The Black classification is famous for its third version. Today it has the following form:

So, we found out what the classification of cavities is in Black. WHO offers its own sorting. According to the ICD 10, it has the following form: 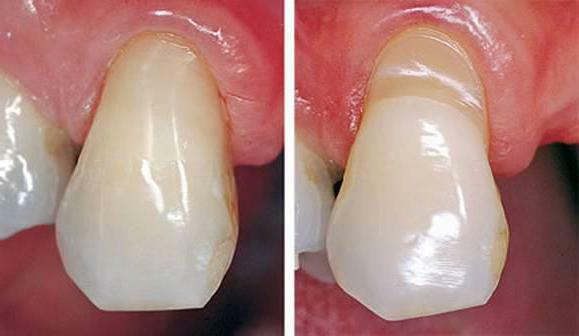 In fact, the classification by Black has found its application throughout the world. According to the degree of destruction, caries are divided into the following stages:

At the initial stage of caries development, a dark or white spot forms on the surface of the tooth. Nevertheless, the enamel here has a smooth surface, since there is as yet no anatomical destruction. The appeared spot doctors are removed with the help of dental equipment. They remineralize teeth, trying to prevent the subsequent development of the disease.

In the next stage, the upper layers of the enamel are destroyed, a reaction to a sharp change in the temperature of water and food, as well as sour and spicy food. The edges of the tooth become rough. At this point, doctors grind the affected area and then remineralize it. Sometimes superficial caries are treated with preparation and sealing.

Agree, the classification of defects of hard tissues of teeth by Black is a great help for dentists. And what is the average caries? In this phase, the enamel layer of the tooth is so destroyed that permanent or intermittent painful sensations arise. In this case, the decomposition process has already reached the upper layers of the dentin.

It is not surprising that the teeth require mandatory medical intervention, during which the doctor removes the affected area and restores it with a filling material.

And now consider the deep caries. This ailment is characterized by an impressive destruction of the dental tissues, which has already affected most of the dentin. If at this stage the treatment is ignored, the pulp can be destroyed. As a result, the patient may develop pulpitis or periodontitis.

Dissection of cavities. Disclosure of

The classification by Black has formed the basis of dental treatment. The cavity is prepared in five stages. We will study the basic rules on the example of cavities of the first class, proposed by the famous doctor.

At the initial stage, the cavity is opened. Dissection of the tooth begins with the removal of the dirty edges of the enamel, which do not have a healthy, dense dentin. As a result, sheer walls are obtained. The number of excised tissues here is determined by determining the focus of decomposition of dentin. At this stage, the doctor must provide access for a good overview of the cavity and its further processing.

Doctors disclose globular or fissure burs made of diamond or hard alloys. The diameter of the tools corresponds to the size of the opening of the notch. Specialists use turbine tips rotating at enormous speed, and water-air cooling.

Classification of cavities by Black has been used for a long time and very helps dentists in their work. What is a prophylactic extension? At this stage, the carious depression is being identified. With the help of this action, the doctor tries to prevent the occurrence of recurrent decomposition of the tooth. The specialist outlines the outer outline of the cavity.

It should be noted that, in accordance with the method of "biological rationality" of IG Lukomsky, this step is not carried out when preparing excavations.

If the doctor is guided by Black's black-hole reaming technology, he performs a radical excision of the areas susceptible to decay to immune areas. The expansion of the carious depression is performed by conical or fissure burs( carbide or diamond).At the same time water-air cooling is used.

Classification of teeth according to Black provides a preventive filling, by which the loss of healthy dental tissues in the occlusal plane is reduced. If in the area of ​​the carious cavity the entire decomposed tissue is removed, then the fissures are excised only within the enamel. The bottom of the notch in this precedent has a nonclassical shape - rounded or stepped. 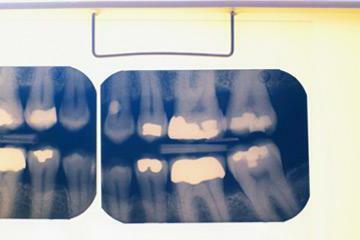 When a fissure is opened, the doctor does not remove a large number of tissues: it is enough for him to make a groove with a depth of 1-1.5 mm and a width of 0.7-0.8 mm without leaving the enamel boundaries. He also avoids creating sharp corners.

In our country, as a rule, cylindrical narrow burs are used for excision of fissures( fissurotomy).Sometimes this operation is performed by spear-shaped and flame-shaped drills.

The next step is the removal of caries - a necroctomy. The doctor completely removes the softened and pigmented dentin from the carious cavity. The zone of destruction and demineralization, from a morphological point of view, is being eliminated at this stage. The boundaries of the cavity are created in the area of ​​an intact transparent dentin.

Then the doctor gives a carious cavity a shape that promotes secure fastening of the seal. It should provide the cured tooth with sufficient resistance and strength at functional loads. At this stage, the final internal and external outlines of the cavity are formed.

Deepening is created by fissure, flame-like, conical and pear-shaped burrs( carbide and diamond) with mandatory water-air cooling. The specialist makes the turbine tip rotate at a tremendous speed. The necessary form of excavation is obtained taking into account resistance and retention.

After processing with carbide or diamond burs, the enamel on the edge of the notch becomes contoured, it is weakened, its prisms lose contact with the lower tissues. In the future, this can contribute to a change in the fixation of the filling and the development of putrefactive processes. These nuances dictate the need for finishing - the final treatment of the edges of the cavity, as a result of which the damaged areas of the enamel must be eliminated. 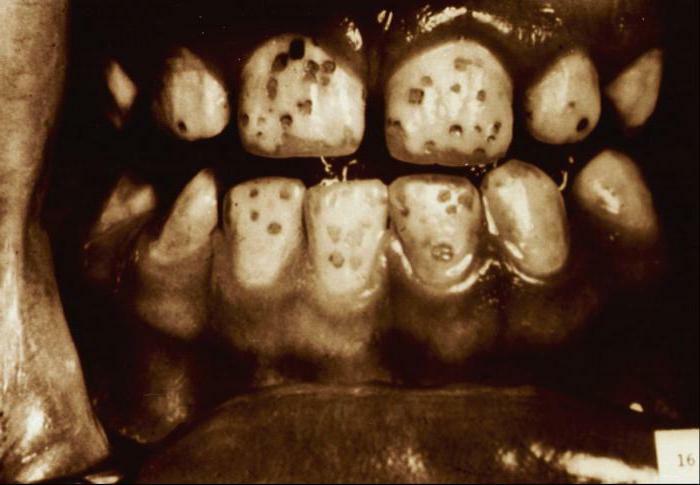 As a result, the doctor achieves the best interaction and reliable marginal fit between the dental tissues and the seal. This operation is carried out by 16- and 32-faceted fins or diamond fine-grained heads.

Doctors operate with low speed drills without pressure with mandatory air-water cooling. They also process the edges of the groove with gingiva trim tabs and enamel knives, removing the thin outer layer of the tooth and eliminating the possible negative effects of overheating, vibration and other factors on it.

As you can see, dental treatment is a rather complicated process, but if you contact a doctor for help in time, you can save a Hollywood smile for many years.