Agaricus is a parasite fungus that grows on trunks and branches of trees. It takes the form of an inverted plate or a horseshoe, which has grown into a tree trunk. The second name of the fungus is the larch sponge. It harms trees, pulling nutrients out of them and accumulating them in their body. 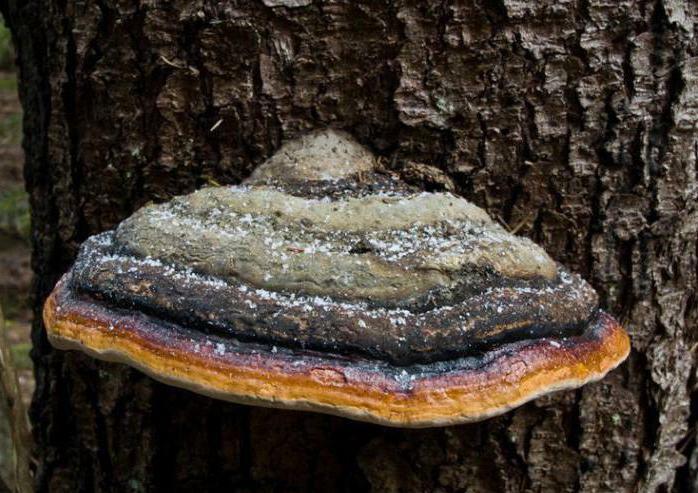 It is these accumulations that have powerful healing properties that people have been using since ancient times.

Even the ancient healers knew about the medicinal properties of agaricus( larch sponge).Application, reviews about the therapeutic effect of drugs on its basis - will be presented neither. And today it is successfully used in folk medicine and homeopathy.

The agaricus fungus has a rough and coarse surface, and inside it feels like a sponge, which gives it its second name. Outside, it is painted white with small brown spots of different sizes, and inside - white, sometimes having a yellowish tinge.

This mushroom parasite was called larch because it usually occurs on larch tree trunks, but it can also be found on coniferous trees - fir and cedar, occasionally found on birches. For a tree, such a "guest" is highly undesirable - gradually it destroys the wood, takes all the nutrients from the plant. 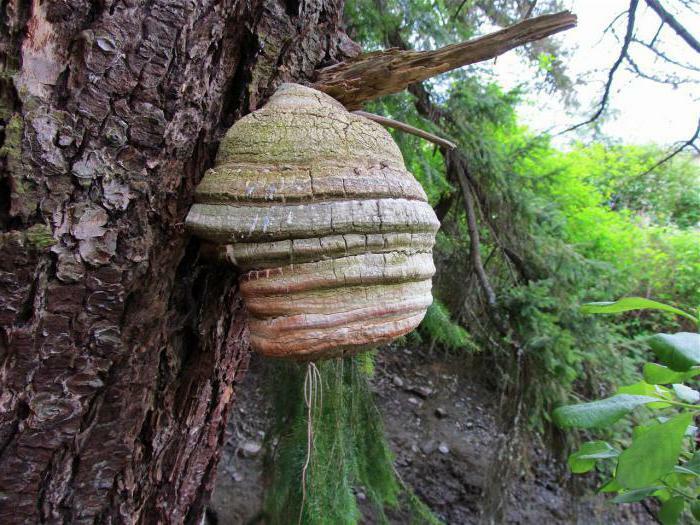 The fungus grows in the northeastern regions of Russia, but is especially widespread beyond the Urals - in the Far East and Siberia. Agarikus lives up to seventy-five years, growing up to ten kilograms in weight and thirty centimeters in length.

Collection and procurement of raw materials

In agar medicine, agaricus( larch sponge) has become widespread. The application and feedback on its useful properties can often be found on the pages of special publications for herbalists.

For the production of medicinal raw material, young fungi are collected. As a rule, they are small in size and painted in a lighter color, and inside - snow-white, soft and loose. Old mushrooms are hard, similar to wood. Harvest the agaricus from the beginning of spring to the middle of summer. Mushrooms are usually knocked down from trees with a strong stick or separated with an ax. 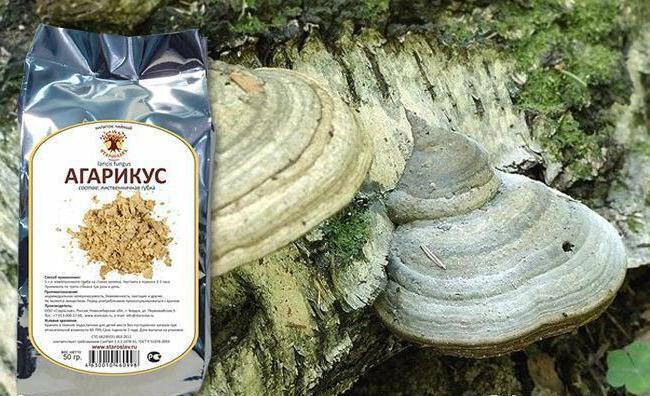 The harvested crop is thoroughly cleaned from hard bark and debris and dried in a well-ventilated room.

Today, ready-made raw materials can be purchased in virtually any phyto-pharmacy. Do not buy raw materials on the market, as its quality is not guaranteed to you.

Available in the form of a mushroom body of a white or creamy mushroom in packages weighing 30 and 100 grams agaricus. Instructions for use are indicated on the carton in which the bag is packed.

The healing properties of

In ancient times called the "elixir of life" agaricus. Healing properties of the fungus were considered universal. And today with it, folk healers and homeopaths treat the following diseases:

Allows you to remove toxins and toxins, cleanse the body with parasitic infections and tumors, including cancer, using agaricus( medicinal sponge).And the patients' reviews confirm the powerful therapeutic effect of this fungus. 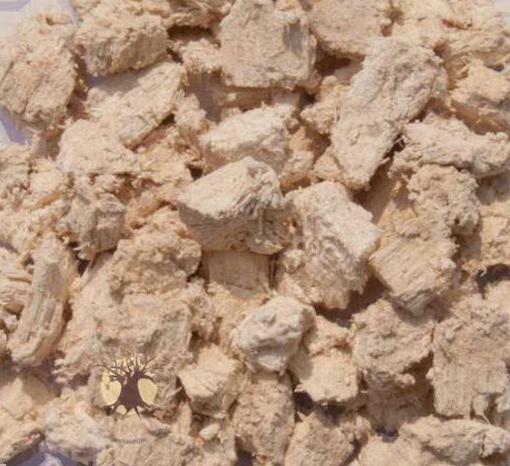 History of the use of agaricus

Information on the wonderful properties of larch sponge has been preserved since ancient times. The famous scientist and healer Avitsenna mentioned in his writings about it, recommending using the fungus for various ailments.

There is a legend about King Mithridates, telling that, fearing an attempt on life, from childhood he took a potion prepared by court healers on the basis of agaricus, which protected from poisoning. When the tsar was defeated in one of the important battles for the state, he decided to settle his life and took the strongest poison, but he did not act - so strong was the defense that he gained thanks to the larch sponge.

The medicinal properties of agaricus and the ancient Greeks were highly appreciated. In their country, the fungus did not grow, so they bought it in overseas voyages. We paid for it with silver - we gave the same precious metal as weighed the mushrooms in dried form.

Today agaricus is widely used in homeopathy. Indications for use are:

Preparations based on agaricus: infusion

To prepare the raw material, grind it with a sharp knife. You can use the finished powder bought at the pharmacy. You need a spoonful of agaricus( tea), which should be placed in enamel or glassware and pour 1/4 liter of boiling water. Wrap the container with a warm towel and allow the composition to stand for eight hours. Then it is filtered and taken eighty milliliters three times a day. Infusion has a calming effect. 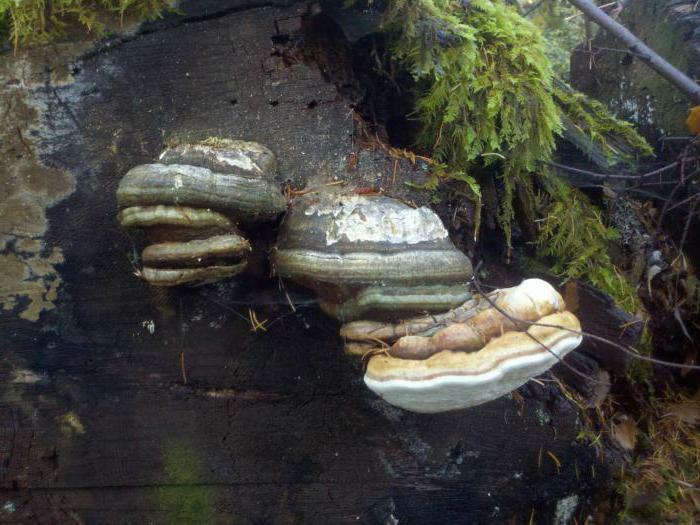 It should be noted that the agaricus has not the most pleasant taste - it is bitter. Therefore, in broths or tinctures, you can add various herbs( for example, mint), lemon, ginger, cinnamon, which is especially effective in combating obesity.

Put the spoon of dry raw material( table) in enameled dishes and fill with 350 ml of cooled boiled water. This mass bring to a boil, then reduce the heat and boil for half an hour. After that, the broth should be infused for about four hours. Strain it and take on a tablespoon, thrice a day before meals.

The tincture from agaricus is prepared simply. A glass of dry raw material is poured with alcohol( 500 ml) and cleaned in a cool dark place for two weeks. From time to time, the composition should be shaken. Take tincture before meals three times a day for thirty drops.

Since ancient times tinctures and decoctions of agaricus have been used as effective agents for the treatment of most respiratory diseases. They are effective for inflammation of the lungs, chronic and acute bronchitis, pleurisy, and even tuberculosis. Tincture sponge( on water) helps to get rid of excessive sweating, which often accompanies lung diseases. 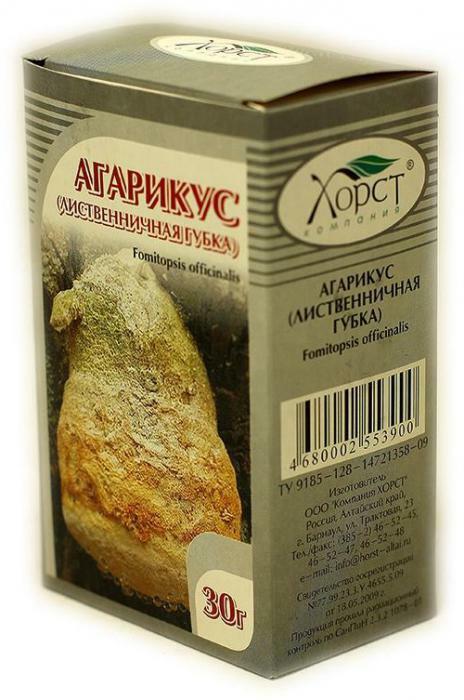 Lanofil, contained in agaricus, helps in the complex treatment of liver diseases. This polysaccharide has a beneficial effect on the work of our most important organ, promotes rapid cleavage and elimination of fats from the body, normalizes metabolism and fermentation in the liver. Therefore, drugs based on agaricus are indicated for many violations in the liver: viral, as well as chronic hepatitis B and C, cirrhosis.

Very useful larch sponge with constipation - this natural remedy has a powerful laxative effect. Infusions and decoctions of agaricus are almost always included in complex therapy for the treatment of dysbiosis. 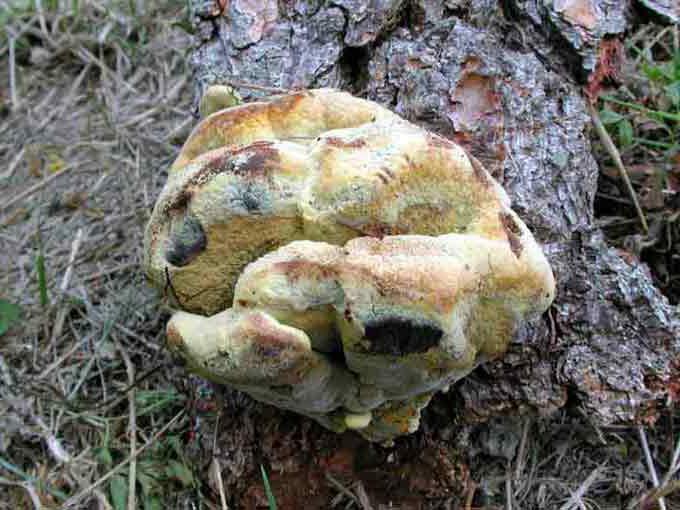 Agaricus is prescribed for oncology during radio and chemotherapy. Thanks to the plant's ability to remove poisons and toxins from the body, preparations based on it help to reduce the negative impact of radiation and reduce side effects from potent chemicals.

When is agaricus recommended?

Do not think that this is a new development of modern homeopaths. Agaricus for weight loss has been used since ancient times. The property of the fungus to break down fats creates the necessary conditions for a normal metabolism. In addition, weight loss is also facilitated by its laxative properties. And, of course, the normalization of liver function speeds up the process of fighting obesity. 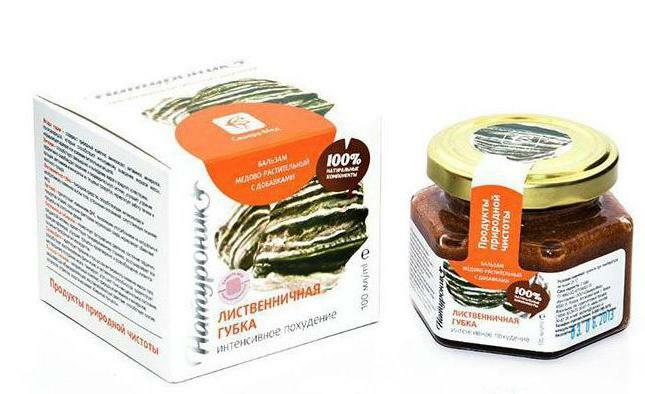 To prepare an infusion for weight loss, you will need thirty grams of dry raw material, which should be filled with 350 milliliters of hot, but not boiling water. Insist the composition in a dark place for about eight hours. Then pour the contents into another container, add fifty milliliters of water and heat the infusion to 55 ° C.Strain and pour the remedy into the thermos bottle. After twelve hours the composition is ready for use. The finished product should be used within a day, then it loses its healing properties. The entire amount of the infusion is divided into equal portions and consumed twenty minutes before meals.

Despite the huge amount of useful properties that agaricus possesses( larch sponge), the application( patient feedback confirms this) should be in strict accordance with the recommended dosages. When they change, diarrhea and vomiting, itching and rashes on the skin can begin.

Drugs based on larch sponges are contraindicated in pregnant and lactating mothers, children under five years of age and elderly people. Contraindications are some diseases of the intestine and liver, so before starting the use of medicines, consultation with the attending physician is obligatory.

Most patients who used drugs in complex therapy for the treatment of digestive tract, liver, respiratory diseases, believe that this is an effective and powerful tool. However, they warn that without consulting a specialist, you should not self-medicate. The fungus is toxic, so it is especially important to follow the dosage prescribed by the doctor.

And people struggling with excess weight, consider that the effect this mushroom gives is difficult even to compare with any diets or means for losing weight. If most methods are aimed at cleavage of already formed fat cells, then preparations made on the basis of agaricus cause the liver to work in such a way that enzymes that prevent excessive appearance of fat cells are produced in the proper volume.