The drug "Tizanil": instructions for use, analogues and reviews

"Tizanil" - muscle relaxant, which has a central effect. To reduce the tone of the skeletal musculature, the Tizanil medication is often used, the indications of which can be used to eliminate muscle spasms, if necessary, resulting from the development of neurological disease, osteochondrosis, surgery or trauma. In addition to the active substance tizanidine, the drug contains additional components. The auxiliary effect is due to the presence of silicon dioxide, stearic acid, microcrystalline cellulose and lactose monohydrate. 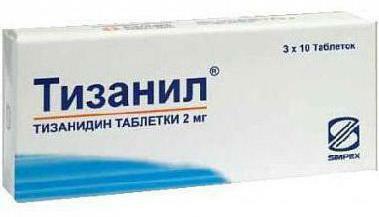 Alfa2-adrenergic receptors are activated after taking Tizanil. The composition of this drug can effectively fight with acutely manifested spasms and spasms in a chronic form, the origin of which is spinal or cerebral. This tool helps to reduce muscle resistance during the passage of passive movements and enhance arbitrary muscle contractions.

Absorption of the drug occurs quickly."Tizanil" instructions for use represents as a means, which is absorbed almost completely, in the maximum amount found in the blood after 60 minutes after entering the digestive tract.

Metabolism occurs in the liver, bioavailability corresponds to 34%, binding to blood proteins - 30%.Half-life requires an average of three hours. The drug is excreted from the body in the form of metabolites mainly by the kidneys, its insignificant part is removed unchanged.

For Tizanil, the indications for use are as follows:

Contraindications to the admission of "Tizanil"

The drug is contraindicated for hypersensitivity to its components, with violations of the liver and kidneys that have a pronounced character."Tizanil" instruction does not allow you to apply during the period of bearing a child and breastfeeding. Contraindication is the treatment of Fluvoxamine. Age less than 18 years, too, refers to contraindications.

With renal failure, the instruction allows the use of the drug, but with extreme caution. The same goes for the joint use of "Tizanil" with CYP1A2 inhibitors and treatment in old age.

The medication is taken orally. If the goal of the drug is to eliminate painful muscle spasms, it is recommended to use it in a dose ranging from 2 to 4 mg. The recommended dose should be taken three times a day. If the case is severe, you can add one additional supplement of 2-4 mg of Tizanil. Tablets instructions for use allows you to use spasticity of the skeleton muscles at a dose of 6 mg. This is the maximum daily dose, which at the initial stage of treatment can not be exceeded. In the treatment of such conditions, three doses of the drug are administered daily. Observing the interval of 3-7 days, the dosage can be gradually increased by an average of 3 mg. 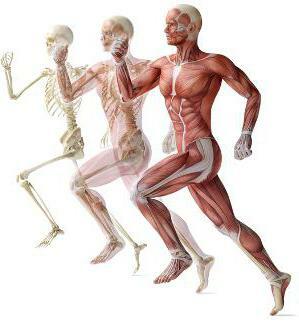 To achieve maximum effect, it is allowed to bring the daily dose of the drug to 24 mg. The optimal dosage is usually 12 mg or more, but can not exceed 36 mg. In this case, 3 or 4 doses of "Tizanil" should be performed daily. The instructions for use contain information on the treatment of patients with renal insufficiency. Such patients first prescribe the drug for use once a day in a minimal dose, which corresponds to 2 mg. Dosage is changed gradually taking into account the reaction of the patient's body. If you need to increase the dose, first increase the dosage itself, and later change the frequency of reception.

Prolonged treatment is sometimes accompanied by unwanted reactions of the body. In this case, they can develop more often and become more pronounced. This also applies to taking large doses of Tizanil. Instruction for use reports such side effects as abnormalities in the work of the gastrointestinal tract, drying of the oral mucosa, insignificant decrease in blood pressure, fatigue, drowsiness, dizziness and other undesirable phenomena.

Occurrence of side effects is the reason for calling a doctor who will either reduce the dose, or cancel the drug, replacing it with another remedy. In the treatment of Tizanil tablets, the instructions for use must be observed, so that the risk of side effects is minimized.

Interaction of different medications is a very important information that must be taken into account before starting treatment in order to reduce the likelihood of side effects, avoid harm to the body and reduce the risk of the effectiveness of therapy.

It is known that the drug "Tizanil" combined with "Fluvoxamine", leads to a deterioration of well-being. With its simultaneous administration with antihypertensive drugs, bradycardia and arterial hypotension may develop. 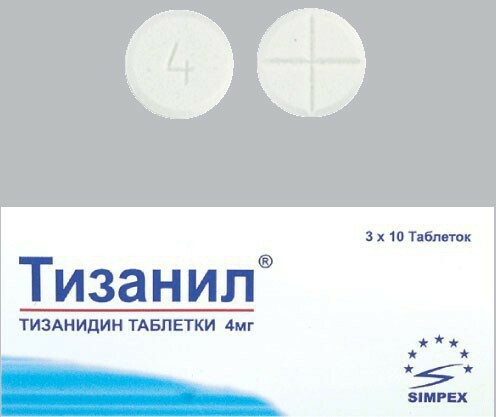 If ethanol or sedatives and Tizanil tablets are used concomitantly, the instruction indicates an increase in the sedative effect that is provided by Tizanil. When it is combined with oral contraceptives, it is possible to attenuate the clearance by half.

Drug interactions can change the effectiveness of treatment. With the simultaneous use of several drugs, they can enhance the effect of each other's friend or depress. All this is fraught with the emergence of adverse reactions, overdose, lack of the necessary result.

Before starting treatment with Tizanil, indications and contraindications must be carefully studied.

There have been reports of adverse changes in kidney and liver function. But with therapy based on taking the drug at a dose of 12 mg or less, such cases were very rare. 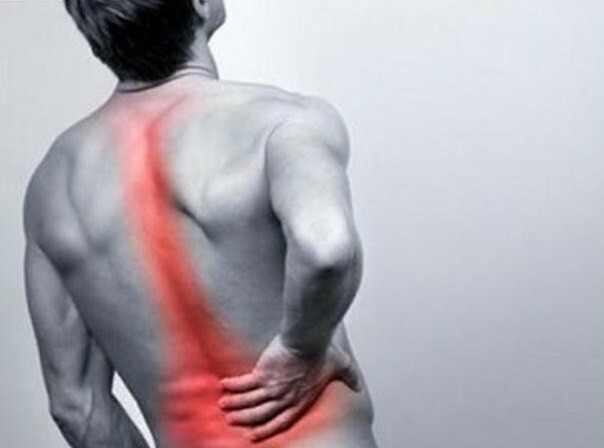 It is advised to take functional liver tests periodically. During the first four months - monthly only once. In situations where AST and ALT exceed the limits of normal indicators, they significantly exceed them, it is necessary to cancel the medicine.

Some patients who take "Tizanil"( analogs as well) may have drowsiness. Being in this state, you can not engage in activities that require increased care and quick reactions.

Due to the threat of deterioration of the patient's condition, the drug is not abruptly abolished, it is refused by gradual reduction of the dose.

The indications prescribed in the instructions for the "Tizanil" tool do not always allow the use of the original due to the presence of some contraindications. The cheapest drugs are Tizanidin Teva and Tizalud. These drugs are also muscle relaxants, they are available in the form of tablets, they have the same active component. Reviews about "Tizanil" are different, because the drug can affect patients in different ways. But basically they are positive. This tool began to be produced for a long time, it is on sale for a long time, so many people have already been able to see its effectiveness. There are also negative reviews left due to the occurrence of side effects due to intolerance of the components or the use of a dose higher than recommended for treatment with Tizanil. Positive reviews were left by people who are satisfied with the result, during the treatment they observed the dosage prescribed by the doctor, and practically did not notice any negative reactions.

Often a medicine is used to treat osteochondrosis. Due to its effect, the symptoms accompanying the disease disappear quickly enough. Pass a headache and pain in the back, improves overall well-being. Sometimes there are minor side effects, such as drowsiness, dryness of the oral mucosa, but with proper adjustment of the dose of the drug or the abolition of the drug, they disappear. Some patients with acute osteochondrosis, provoked radicular syndrome, it was "Tizanil" returned normal mobility, while other medications did not bring the desired result. The drug is good to remove the high muscle tone, which was the result of a stroke."Tizanil" is taken only according to the doctor's prescription, if there are appropriate indications. If treatment is required for an elderly person or a patient with a sick liver, it is better not to risk health and choose another muscle relaxant who also copes well with the tasks.