"Solcoseryl" refers to biogenic stimulants. The drug is made on the basis of the extract, obtained from the blood of young calves. It has a regenerative effect and can be used to treat the skin in the presence of burns, ulcers, wounds. In addition, the medication restores normal blood circulation in the brain, positively affects the body with venous insufficiency and metabolic disorders. If necessary, you can choose the analogue of "Solcoseryl", the use of which will allow you to get the same result. 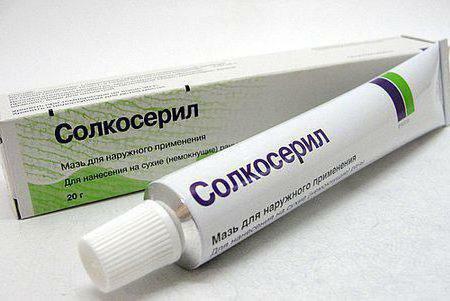 Forms of the preparation, its components

The drug consists of dry matter and water for injection in the amount of 42.5 mg and 1 ml respectively.

As a result of the performed studies using In vitro technology it was found that the drug positively influences the regeneration and course of reparative processes, promotes the synthesis of collagen, stimulates such processes as cell proliferation and migration. 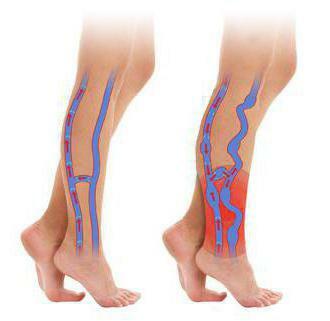 Thanks to the use of "Solcoseryl", oxygen consumption is increased, glucose is sent to cells that have been exposed to hypoxia, and to those that are metabolically depleted. The drug activates oxidative phosphorylation and aerobic metabolic processes. Analog "Solcoserila" has a similar effect.

Studies aimed at identifying features of absorption, distribution and excretion of a drug can not be performed using standard pharmacokinetic methods. This possibility is absent for the reason that the main ingredient of the drug has pharmacodynamic effects, which are characteristic for molecules that have special physico-chemical properties.

"Solcoseryl" is prescribed for chronic venous insufficiency, which is combined with trophic disorders and is characterized by persistent flow. The drug is indicated for occlusive diseases associated with damage to the peripheral arteries( stages 3 and 4 of Fontaine) in cases where the patient's body does not take other medications, that is, there is intolerance to their components, or there are contraindications to the appointment of other medications. In such cases, other drugs can be used for treatment instead of the "Solcoseryl" preparation. Analogues are cheaper, but perform the same tasks as this drug, so many people prefer drug substitutes. With problems with blood circulation in the brain and metabolic disorders, the presence of ulcers, erosions, aft, frostbite, Solcoseryl can also be prescribed. In addition, it is possible to use a medicine for the eyes.

Each type of preparation "Solcoseryl" is intended for the treatment of certain conditions. Without a prescription, you can buy only jelly and ointment to buy funds of other forms, you must always consult a doctor. The specialist will prescribe a suitable dose of the drug and give the necessary recommendations. 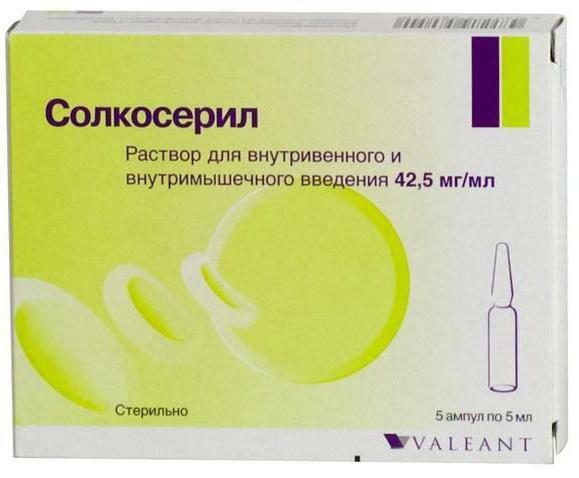 If the sensitivity to dialysates of calves is increased, the patient is not prescribed medication. It is not recommended to include the drug for injections in the treatment regimen of patients aged less than 18 years, the safety of such therapy in patients of this age is not established. When it prohibits the use of "Solcoseryl" instruction, analogues can be selected independently, but the final choice of the drug should be carried out by the doctor, taking into account the patient's condition, the presence of contraindications.

"Solcoseryl" should not be mixed with other drugs when injected, exceptions are only solutions of glucose( 5%) and sodium chloride. As a part of the medicine there are preservatives E 216, 218 and benzoic acid in trace amounts, the presence of a risk of allergy to these substances is the reason for refusing to use Solcoseryl.

Data that would confirm the teratogenic effect of the medication are not available, but when used by a pregnant woman, care must be taken. There is no data on the safety of such treatment during lactation, until treatment is completed, it is not recommended to breast-feed the baby. You can choose the analogue of "Solcoseril".

Treatment with various forms of the drug

This form of medication is suitable for patients who need to cure an ulcer of any kind, and it is used at the initial stage of therapy. The same applies to extensive burns and trophic lesions when they occur due to serious circulatory disorders having a diabetic or atherosclerotic origin. The jelly layer should be thin, and it should be applied twice a day, and the affected area should be cleaned beforehand. The onset of the granulation process and epithelization indicate the need to switch to ointment treatment. 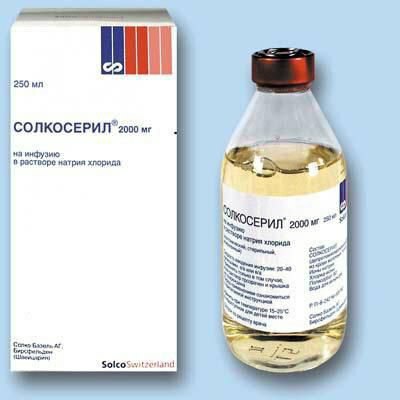 A medication in the form of an ointment is applied once or twice a day only on a dry wound, when treatment of frostbites, burns( degree 1, 2), minor traumatic injuries, venous ulcers is performed. Pre-treatment of wounds with the use of a disinfectant solution, including those where epithelization has begun, is required. Use ointment can be until the full restoration of the skin. You can use analogues instead of "Solcoseryl" ointment. Cheap tools are not always worse than the original. It is permissible to use dressings, but not occlusal. If there is pus in the wound, it may be necessary to remove it surgically.

The drug is administered intramuscularly and intravenously. A specialist should select its dose and perform the administration of the drug.

Infusion is necessary for craniocerebral trauma and the consequences that arise after their preparation, as well as into intoxication, alcohol delirium and the presence of trophic ulcers, wounds with a bad course of regenerative processes, severe burns. The dose is selected by a specialist taking into account the individual characteristics of the patient's body. You can choose analogues cheap instead of "Solcoseril".

This form of preparation is designed for the treatment of periodontal and mucosal tissues, which lining the oral cavity. Dental paste can be treated even with damaged gums and cracks on the lips. Sites to which the product is applied should be dry. The medicine can not be rubbed, its layer must be thin. The frequency of the procedure is three times a day, but not more than five. 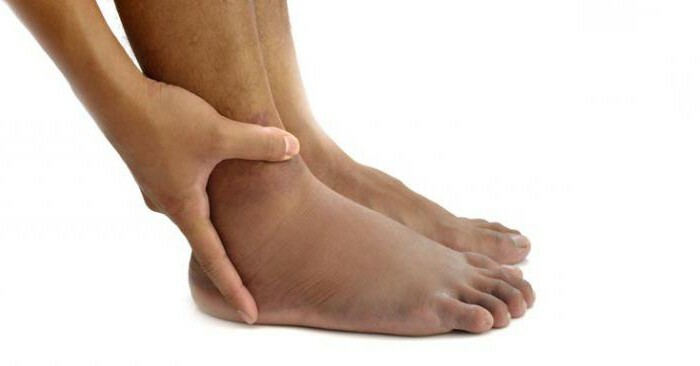 For eye lesions and if necessary to quickly get used to contact lenses you can use analogues instead of Solcoseryl, the price for which is more profitable. The gel is recommended to be used daily three or four times.

If "Solcoseryl" gel is not suitable, analogues of the same dosage form can always be selected together with a specialist.

This form of the drug is used for 0.1 g three times a day. The drug is prescribed by a doctor if there is an appropriate indication.

Only a doctor can determine what form of medication is needed for treatment and at what dose, so even before using OTC drugs, one should consult a doctor.

Side effects include allergic reactions that require drug discontinuation. To reduce the likelihood of their development, one must take into account the state of health and contraindications. In addition, at the time of treatment, you should stop using alcohol, it is also worthwhile to check with your doctor about the possibility of combining the medication with other drugs.

"Actovegin" is a cheap analogue of "Solcoserila".Its composition is closer to the original, it is made from the blood of calves, there are several forms of such a drug, which makes its use convenient. Another inexpensive drug is Levomikol. Two of these medicines are the most effective and popular, in addition, their properties, they are very similar to "Solcoseryl."Analogues are cheaper, and for this reason, some people prefer it to substitutes, not to the original.

Reviews show that "Solcoseryl" like many different dosage forms, because it always heals wounds, ulcers, removes bedsores and sutures after operations. The reviews do not mention the development of allergic reactions, which means that such cases are rare. For consumers, the cost-effectiveness of the drug, its versatility and effectiveness are of great importance. Feedback is usually positive. In order for the treatment to be successful and not to cause harm, "Solcoseryl" should be used strictly according to the indications and after receiving the doctor's advice.