Pain in the sacrum, giving to the legs: causes, prevention and treatment

Sacrum is a special triangular bone located at the base of the spine. It consists of 5 interconnected vertebrae. Among all the painful manifestations in the spine, the pain in the sacrum, giving to the legs, is usually characterized as the strongest.

Unfortunately, in women, such a pathology( referred to in medicine as cautery) is much more common than in men. According to the researchers, this is due to the fact that the muscle tissue in the fair sex is weaker than the male sex, and during pregnancy, for example, the load on the spine turns out to be quite strong. 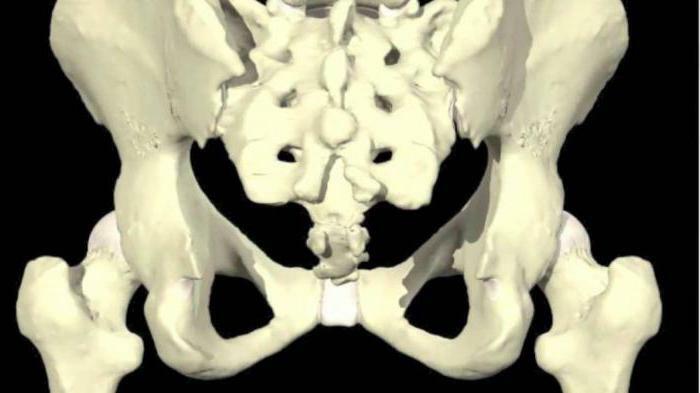 How to accurately determine where the

hurts Before we go on to describe the symptoms of various ailments that cause this kind of discomfort, you need to take into account one important detail. Do not confuse pain in the sacrum, giving to the legs, with pain in the lumbar spine. How to differentiate similar feelings?

To do this, try to examine yourself. Strongly press the fist or fingers onto the spinous processes of the bone being described, without missing the gaps between them. If the sacrum is healthy, then there should be no additional painful sensations from such a survey. Another sign of having problems with the base of the spine is the inability to lie on your back, especially on a hard surface.

Causes of pain in the sacrum

Severe pain in the sacrum, giving up in the leg, can be caused by various causes:

From all of the above it becomes clear that the pain syndrome under consideration is always only one of the signs of any pathology the patient has. So, at its occurrence it is necessary to address to the doctor for detailed inspection and statement of the exact diagnosis. 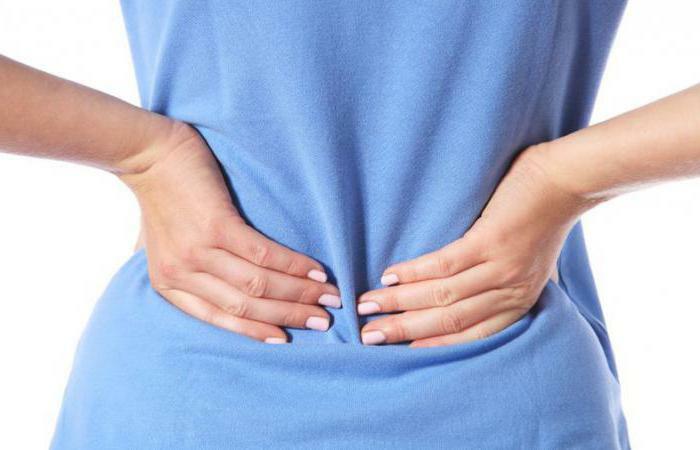 Now we will take a closer look at how diseases manifest themselves, the main symptom of which is the described pain. One of the causes that cause it, may be osteochondrosis. And, as a rule, pain in the sacrum, giving in the leg - this is not the only sign of this pathology. This disease is manifested by a feeling of strong tension and stiffness in the back, tingling and numbness of the lower extremities in the foot and shin area. The patient has problems when trying to bend over.

An increase in pain can also cause intervertebral hernia, which is caused by osteochondrosis. In this case, pain can be given to the groin and to both or one lower limb. And especially this symptom is manifested in the first half of the day, by the evening. 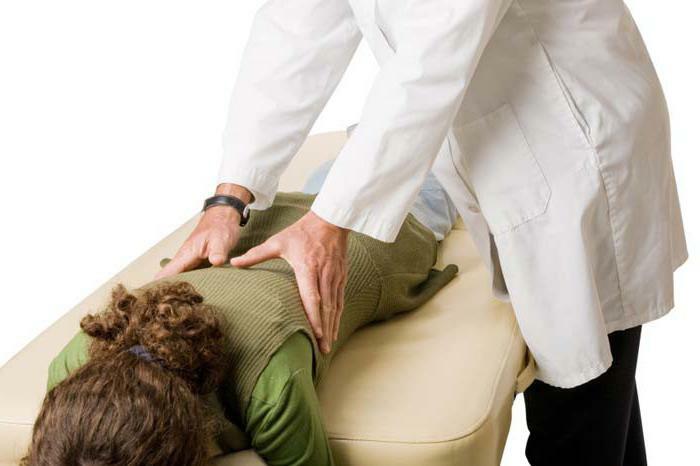 Symptoms of bone displacement in the sacral region of

Another reason causing pain in the base of the spine may be the displacement of bones in the sacral region to the left or to the right. Such a pathology in medicine is defined as a violation of the functions of the sacroiliac joint.

When the displacement occurs to the right, the patient is troubled by the pain in the sacrum, which gives to the right leg( such irradiation is caused by a violation of blood circulation in the limb).They are often accompanied by cramps and muscle pain.

In addition, the human liver and gastrointestinal tract deteriorate noticeably( there is a heaviness in the stomach, digestion is disrupted, as a result, the patient suffers from persistent diarrhea), and the general tone also decreases. Patients often lose weight at the same time, and women develop gynecological pathologies.

With left-sided displacement, people not only suffer pain in the sacrum, giving to the left leg, but also disruption of the heart and lungs( the result is frequent catarrhal diseases).In addition, for this pathology is characterized by an increase in excess weight in the patient and a tendency to permanent constipation. 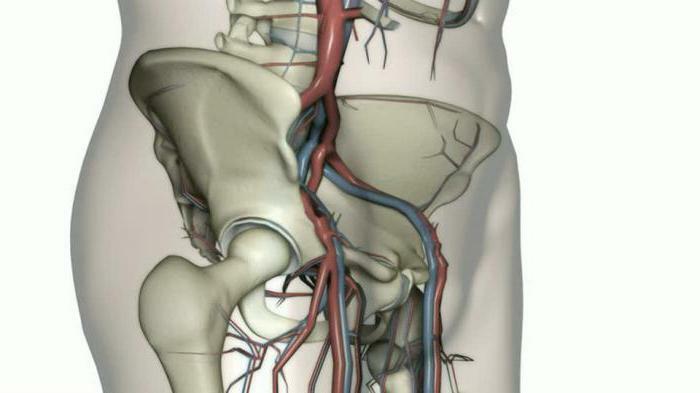 Manifestations of thrombophlebitis of pelvic and iliac veins

Sometimes, as a result of inflammation in the pelvic organs, surgical intervention or in the postpartum period, patients may develop a complication in the form of a pelvic thrombophlebitis. Often it is a consequence of the spread of this disease from the lower extremities.

Symptoms that represent his clinical picture can include, in some cases, pain in the bladder, vagina and waist. For example, patients may complain that the pain in the sacrum is left in the leg, or that a sensation of crawling crawling has appeared in the limb.

Due to the abundant branching of the venous network, the pathological process often seizes both sides, and the patient experiences edema of both legs and an expansion of veins in them. 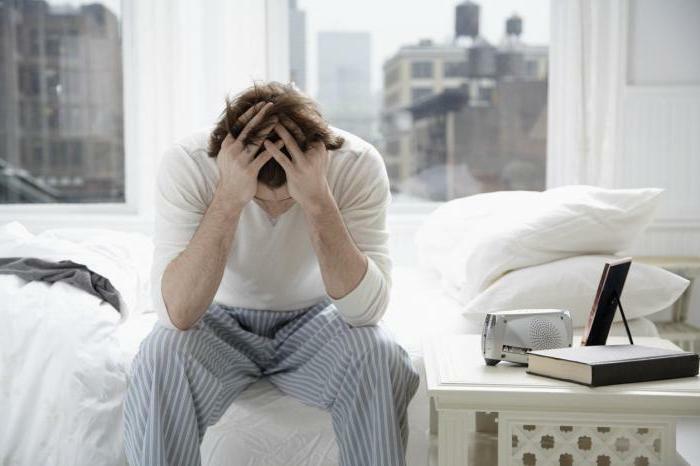 Irradiation of sacral pain in the lower extremities occurs in the case of certain diseases of the pelvic organs.

Thus, the presence of chronic prostatitis in men can be manifested not only by frequent urination, burning sensation and decreased potency - patients often complain that they have a sore and sore on one side and give in the leg( usually in the opposite direction).Often the pain also covers the external genitalia, appears in the rectum or in the suprapubic region. It may turn out to be hardly expressed, and so strong that it deprives sleep.

By the way, often in the case when the pain is localized in the sacral department, men unsuccessfully try to treat themselves with home remedies, thinking that they have radiculitis.

A woman's sacral pain can be troubling during menstruation. At the same time, it has a weak localization and has the property of irradiating to the lower limbs. Its source in this case is the sacro-uterine ligaments.

Some women of the weaker sex have their uterus turned back and positioned so that, increasing before menstruation, it presses on the nerve endings in the area of ​​the sacrum. This causes severe pain, which extends to both the lower abdomen and the lower back. 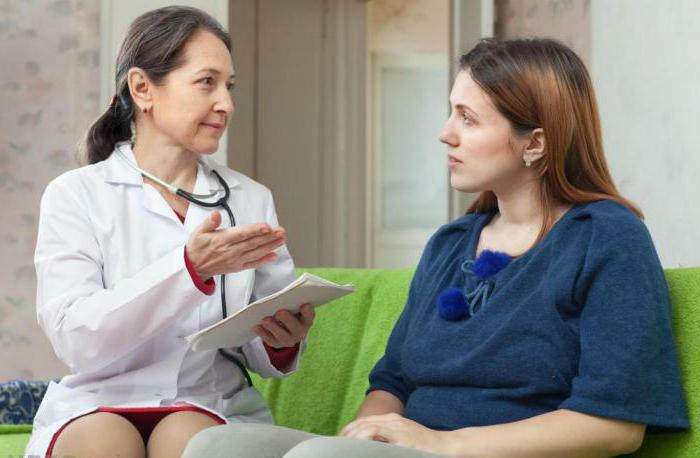 If a person regularly experiences pain in the sacrum giving to the legs, he should necessarily appear to a neurologist, traumatologist, orthopedist, urologist or gynecologist for an accurate definition of the underlying disease.

In order to correctly diagnose and understand what exactly caused this syndrome, the doctor needs to find out whether the sensations of the patient are related to the pathology in this particular bone, or they are the result of some separate disease. For this purpose, an examination and a detailed interview of the patient are conducted. And to refine the data, as a rule, use X-rays and computed tomography, which allows to exclude or confirm the presence of tumors, and also to examine in detail the condition of pelvic bones and sacral spine. For women, the best way to diagnose( in the presence of gynecological problems) is the results of an MRI study.

It is clear that in cases when the sacrum hurts and gives in the leg, just as with pain in this area without irradiation, first of all one should eliminate the underlying disease. Together with him will leave and exhausting symptom.

But if the patient is in such a state that he needs additional anesthesia, the doctors prescribe analgesics and non-steroidal anti-inflammatory drugs( for example, Diclofenac) in the form of tablets and intravenous injections. In some cases, the use of Novocain blockades is effective. The latter are the introduction of certain drugs( Novocaine, Lidocaine, Kenalog, etc.) into the vertebral canal, the ileum cavity, and also to the painful points of the muscles surrounding the affected area.

Another method that relieves pain in the buttock / sacrum in the leg is acupuncture and massage, which allows to restore the normal position of the pelvic organs, if it was found displacement, relieve tension in the muscles, and normalize blood circulation and lymph drainage. 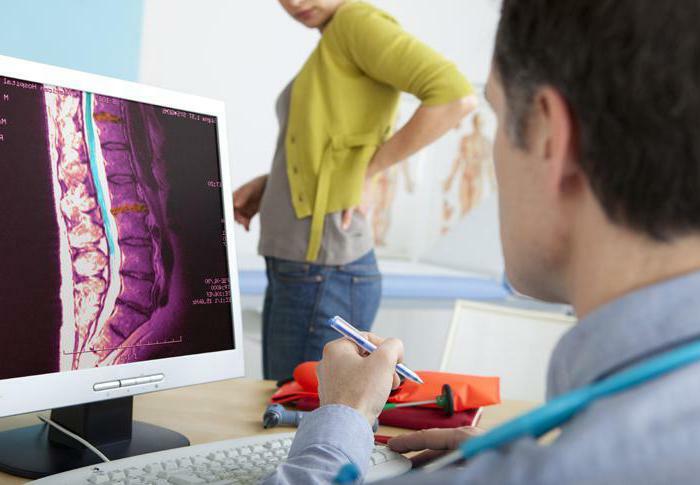 General recommendations for pain in the sacrum

In any pain in the area of ​​the sacrum, doctors forbid the patient to make sudden movements and undergo heavy physical exertion. In order to strengthen the bone and muscle apparatus, the patient must fully eat, receiving a full amount of vitamins and minerals. In the diet of each patient must be present sour-milk products, nuts, vegetables and fruits.

To reduce pain in the sacrum, giving to the legs, and any other discomfort in this area, the patient is recommended to wear a semi-rigid sacral-lumbar corset. He somewhat restricts the movement of the spine in the named department, providing him, thus, peace and contributing to recovery.

The corset is chosen strictly in size, which allows it to be worn under clothing for work( and at home) until the pain disappears. But its use must necessarily be agreed with the attending physician. Be healthy!