For thousands of years people dream of a magical elixir that gives eternal youth. Everyone would like to find a remedy that will easily solve the problems with aging and poor health at once. AliveMax, one of its products, called "Veratrol plus"( spray), is positioned as a panacea. 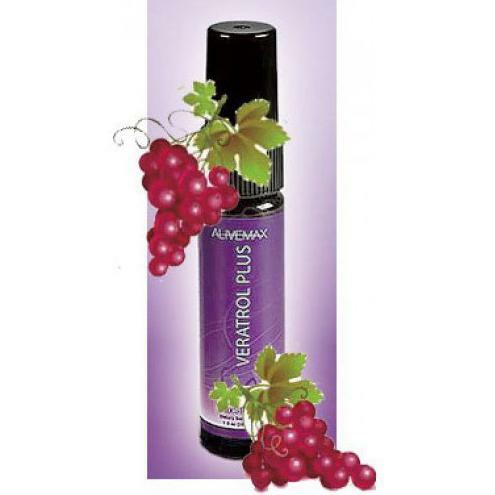 The manufacturer assures that the use of his sprays can rejuvenate the body, slow the aging process, and also, save almost all known diseases. One of such miracle drugs, produced by this company, is the spray "Veratrol".Further in the article we will consider the components that make up its composition, their influence on the body, the instruction for use and the testimonies of those who have already tested its miraculous power. We will try to find reviews of real doctors about how this spray is really effective in fighting various diseases.

The variety of sprays produced by

Official distributors distributing AliveMax products say that the drug we are considering is not accidentally produced in the form of a spray. There is an opinion that the sublingual method of taking the drug( under the tongue) is one of the fastest and most effective. Therefore, AliveMax has developed a line of effective sprays that spread rapidly throughout the body and are absorbed into all cells. The manufacturer claims that its drugs are not a medicine. This dietary supplement, which is designed in a short time, cleanse the body, restore damaged cells, activate metabolic processes and slow the aging process. The complete line of these preparations consists of four sprays: Vitaliti, Multivitamin, Veratrol and Slim sprays. 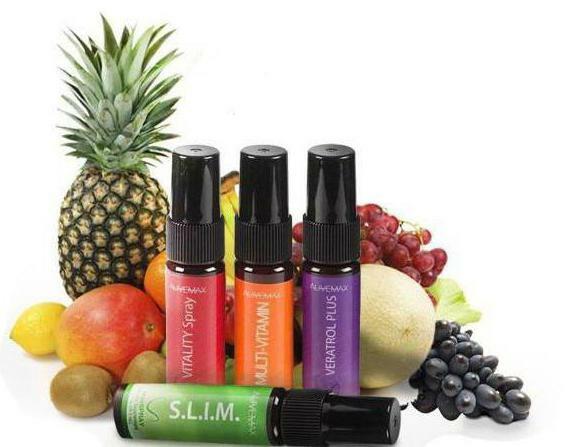 For best results, the manufacturer recommends the use of all 4 sprays at once, but if necessary, each can be used independently.

We pay special attention to the spray "Veratrol", because according to the instructions, it has a lot of indications for use, it has a very wide range of therapeutic effects and among this line of dietary supplements it is considered to be the base drug.

Resveratrol is the main component in Veratrol

Resveratrol is called a real discovery, a breakthrough and an indispensable find for anti-aging medicine. This component, which is part of the spray "Veratrol", is a polyphenol, which to date has been devoted to more than 2000 different publications. It is synthesized from red grape varieties and is actively explored.

The manufacturer of sprays declares that the effectiveness of resveratrol in the prevention and control of diabetes mellitus, Alzheimer's disease, bronchial asthma and Parkinson's disease has already been proven.

It is also said that this amazing component, resveratrol, is capable of activating apoptosis. This means that getting into the body, it is capable of provoking the self-destruction of cancer cells. This effect was seen with the use of resveratrol in patients with prostate cancer, lung, esophagus and lymphatic system.

Many people write about the fact that resveratrol, extracted from red grapes, is a powerful antioxidant. Distributors of sprays of the company "ElivMax" write about already conducted studies that confirmed that resveratrol slows the aging process by 25-30% and is able to activate the anti-aging gene.

Therapeutic composition of the preparation

The effectiveness of the drug is due not only to resveratrol. The instruction for Veratrol( sprays) lists various components that make up its composition and exerts a visible healing and rejuvenating effect on the body. 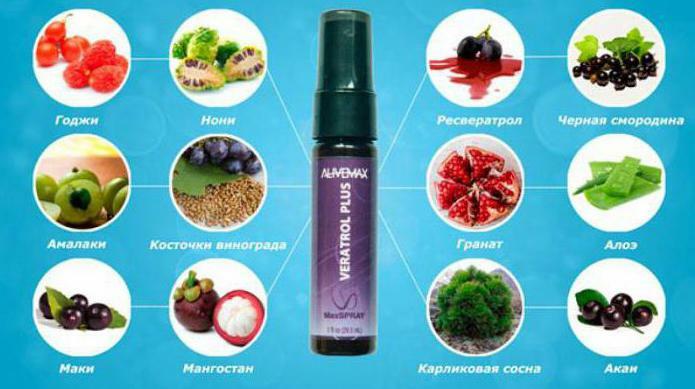 The effect of the ingredients on the

The manufacturer states that due to its rich composition, when used systematically, this dietary supplement in the form of a spray has the following effect on the body:

"Veratrol"( spray): use for various diseases

According to the instructions, the use of "Veratrol" is indicated in the following problems and diseases:

Also, the spray "Veratrol" is used for various diseases of the musculoskeletal system: This spray is recommended by the manufacturer and for a number of cardiovascular diseases, such as:

On some resources, the product of the company "Eliv Max" spray "Veratrol" is called a hepatoprotector. It is believed that it not only contributes to the cleansing of the liver, but even able to restore it. Due to such possibilities, the spray is recommended for use in the treatment of various hepatic diseases.

Well, of course, this drug should be used by those who wish to slow the aging process in their bodies and maximize their youth.

How to apply Alivemax sprays according to

On the sites involved in the distribution of this product, in order to achieve the maximum anti-aging and therapeutic result, all 4 sprays are recommended to be used simultaneously. Accordingly, each is sprinkled under the tongue in turn, with an interval of 60 seconds. After 1 psika spray should be kept under the tongue for about 15 seconds, then swallowed and after 1 minute it is necessary to spray the next. In this case, according to the instructions, the order of the sprays, will be "Veratrol" or "Multivitamin", absolutely no value. After taking them, it is recommended to refrain from drinking and eating for 15 minutes.

But the manufacturer understands that the cost of the drug produced by him is not low. And most of the population can not afford to buy all 4 sprays at the same time. That is why the reception of each spray, including the Veratinol we consider in detail, is allowed as an independent drug.

Adults over 16 years of age should spray the spray under the tongue 7 times a day( every 2 hours).Adolescents 14-15 years of age are recommended to perform 6 receptions during the day. At the age of 11-13 years ─ 5 receptions per day. Children from 7 to 10 years must do 4 sprays. For children aged 4-6, the norm is 3 doses.2 Spray spray during the day make babies at the age of 2-3 years. And the smallest, newborns under 1 year make 1 spray per day.

Average price of the drug

In one bottle, the spray "Veratrol plus"( which we will discuss further on) is contained in an amount of 30 ml. On average, if it is used by an adult 7 times a day, then the content is enough for 25 days. The cost of this bottle varies from 1500 to 2800 rubles. It depends on the mark-up of the distributor and the discounts that are constantly carried out by websites that are engaged in the Internet sale of this dietary supplements.

Reviews of physicians about this tool

Sites selling this product, speak about positive responses of physicians dedicated to this drug. But to verify their reliability at the moment is not possible. Unfortunately, in official professional medical forums to meet doctors' reviews about the spray "Veratrol" is problematic. But you can meet various discussions on the account of this dietary supplements in social networks. That's where people with medical education ask buyers to be very cautious and note that if the drug worth up to 3,000 rubles.could solve all the health problems at the cellular level, then there would not be any sick people in the world. 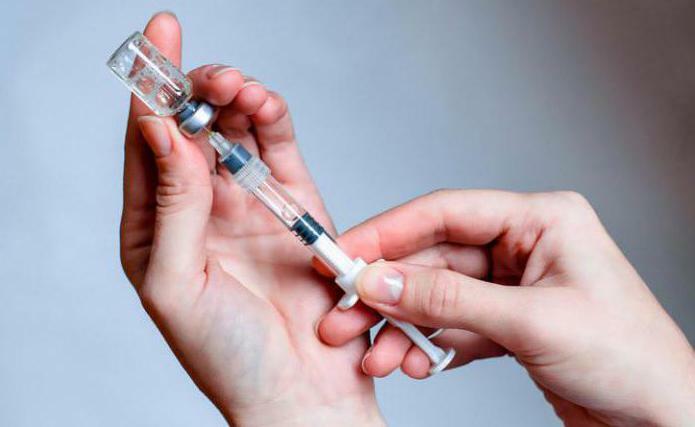 Special care should be exercised by diabetics and do not believe in promises to rid them of high sugar all in a couple of pshiki sprays under the tongue. Insulin-dependent patients refuse to take classical therapy and hope for a miracle spray can be very costly in terms of health.

Positive feedback from those who used "Veratrol"( spray)

On the sites that sell this dietary supplements, there are many enthusiastic reviews. People write that this spray helped them speed up the healing process with a burn of the esophageal mucosa, improve the condition with various oncological diseases. Positive feedback on Veratrol( sprays) suggests that it helps to speed up recovery of the body after various surgical interventions, lower blood pressure and normalize blood sugar levels in diabetes. 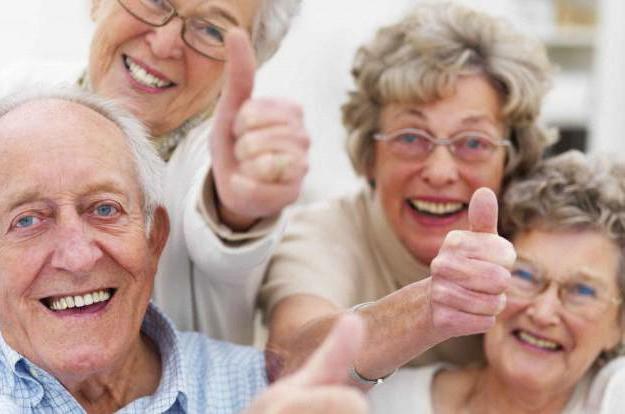 It is possible to meet patients' reviews of the drug, which confirm its effectiveness in the treatment of eye diseases. Some even suggest that the spray helped them restore their eyesight. You can find reviews even that after using it, gray hair began to turn black.

After reading all the laudatory reviews, it is very alarming that it is impossible to meet negative statements about it on such resources that spread this spray. It is impossible to establish the identity of satisfied customers, accordingly, it is also not possible to verify the reliability of these reviews.

If desired, in various groups of social networks dedicated to the treatment of dietary supplements, you can meet a lot of negative reviews. Producers honestly warn that their drug is not a medicine, but it is claimed that it has an effect on the body at the cellular level. 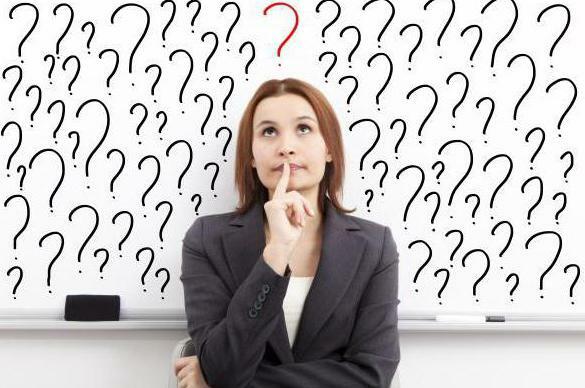 Sensible people immediately criticize these statements and do not advise gullible buyers who believe in a panacea to spend their money.

Even if you do not hope for the miraculous effect of taking this spray, and using it as an additional supplement to nutrition, you need to remember that this preparation contains many extracts. It should be used with caution for people prone to allergies. Also, never forget about the possible individual intolerance.