Medical tours in Tatarstan are in great demand among Russians. On the territory of this republic there are many health resorts. After all, the nature of Tatarstan is itself a healing factor. Coniferous forests, mountains, four great majestic rivers, many blue lakes, endless steppes - all this contributes to the improvement of the body. Zelenodolsky district of the Republic of Tatarstan is especially famous for its nature. It is an exceptionally ecologically clean area. There are no factories and mining enterprises. This area stretches along both banks of the Volga in the north-west of Tatarstan. In this article we will describe the conditions of accommodation and food, services and services, as well as the medical base of the sanatorium "Sosnovy Bor"( Vasilievo).Prices for tours listed below are relevant this year. What illnesses are cured in the sanatorium "Sosnovy Bor"?We will also talk about this. Information is also drawn from the responses of those who have already visited the sanatorium.

Where is the health center and how to get there

The address of the Pine Forest is quite simple: 422530, Republic of Tatarstan, Zelenodolsky district, Vasilyevo urban village, Lagernaya street. To book a room in a sanatorium, simply call 8( 843) 240-91-52.Sanatorium "Sosnovy Bor" is located in the forest area on the outskirts of the village of Vasilievo. This settlement is located only thirty kilometers from Kazan and 60 kilometers from the airport of this city. If you arrive in the capital of Tatarstan by train, then at the station you need to change to the train. You can go down at two stops of your choice: either "smt. Vasilyevo ", or" 766 km ".It is easier to get to the health resort by bus. At the railway station in Kazan, you should take the bus route one hundred and fifty-eight. On your own car the road from the capital of Tatarstan will take an hour and twenty minutes. 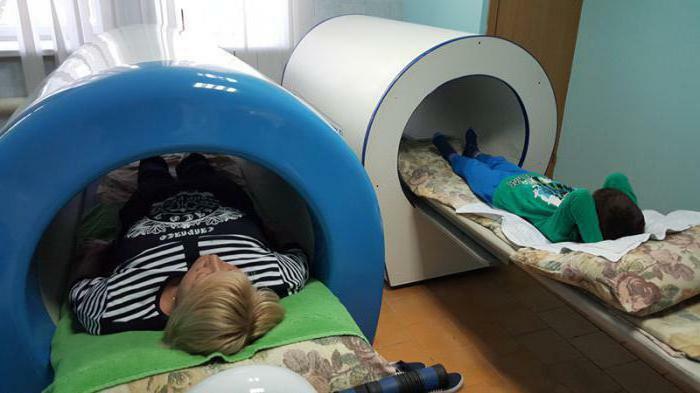 The sanatorium was founded in 1984.At that time it consisted of only two modest cottages, a dining room and a medical building. But its location in the pine forest, which gave the name of the health resort, very much liked the holidaymakers. Therefore, the sanatorium survived the difficult period of the collapse of the USSR and began to develop. New buildings were built, the medical base was replenished with modern equipment, the level of services increased. Now Sosnovy Bor( Vasilyevo) is a sanatorium consisting of seven dormitories. It should be said that for the construction of the forest was not cut down. On the contrary, the territory of the sanatorium was expanded by planting new pine, spruce and cedar trees. Now the health resort lands cover more than fourteen hectares of beautiful pine forest. Between the trees there were buildings, a sports complex, a beauty salon, a cinema hall and a cafe. The oldest buildings are very close to the hospital. A little further away the buildings are five and six. Quite on the outskirts is located number 4 - for lovers of solitude and hiking.

Indications for treatment in the sanatorium

"Sosnovy Bor"( Vasilievo) - a sanatorium of a wide profile. They successfully treat diseases of the nervous and cardiovascular systems, disorders in the digestive tract. From staying in the health resort, metabolic disruptions and blood circulation improve. The healing air of the pine forest has a beneficial effect on the respiratory system. Healing mud heal the backbone of the musculoskeletal system. In the health resort there are doctors of a narrow profile. In the sanatorium, you can even treat your teeth at the dentist. Take for treatment in the sanatorium "Sosnovy Bor" and those who need rehabilitation after surgery and intensive care. Accompanying the problem pregnancy is another "hobby" of the sanatorium. There are also health programs in the health resort, such as "Women's and men's health", "Weight correction", "Body cleansing". 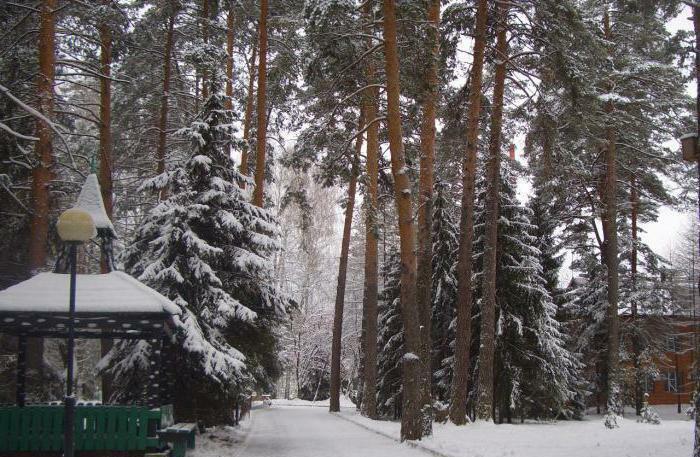 The well-coordinated and well-qualified medical staff is not all that the Sosnovy Bor sanatorium boasts. The therapeutic base of the health resort combines traditions and innovations. The latest achievements of medicine are introduced into the treatment of patients only when the doctors are completely sure of their positive result. At the heart of the sanatorium "Sosnovy Bor" delivered health of man and the first commandment of the doctor "Do no harm!".When a patient is admitted to a health resort for treatment, he is examined by a therapist who prescribes procedures and, if necessary, dietary meals. You can be offered such health programs as "Health from Nature"( active longevity) and "Radamir", based on the principles of Ayurveda. There is a cryo-sauna, various vibro-massagers. Practiced manual therapy. It is impossible to discount the influence on the organism of the air of a pine forest that is saturated with phytoncides. It has a beneficial effect on the respiratory system and soothes nerves. 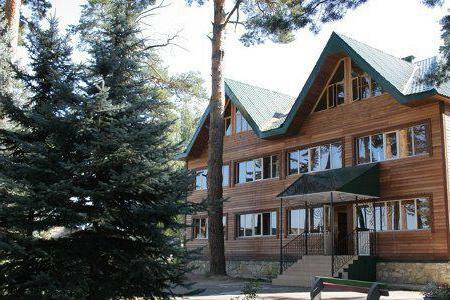 The sanatorium is open all year round and accommodates its guests in six dormitories. The seventh is intended for children of the Sosnovi Bor health camp. The rooms are divided into categories. The cheapest is Economy. This is a block in which a bathroom( toilet and shower) are shared by two rooms."Standard" is a category of rooms designed for one, two or three people. In this room there is a refrigerator, TV, electric kettle, crockery. In some buildings in the rooms of the guests the bathrooms are equipped with bathrooms, and in others - with shower cabins. In the category of rooms "Lux" there are hair dryers. These living rooms can consist of one or two bedrooms. In the "Apartments" there is a living room. The windows of these luxury rooms overlook a beautiful pine forest. The area of ​​"Business Apartment" is one hundred square meters, and "Premium" is two hundred. The last room has its own sauna. 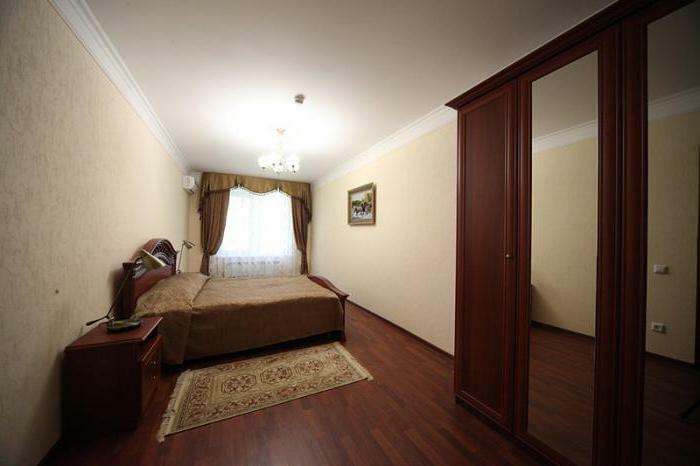 If the doctor did not prescribe a therapeutic diet for you during the settlement, then you visit the common dining room. There, three main meals are served in the "Swedish Table" format. What is remarkable: in the Republic of Tatarstan they respect the demands of Islam for food. On the tables both in the common room, and in the diet, you can always taste the dishes "halal".On food, tourists always leave the most laudatory reviews. It turns out that diet food can also be delicious. Patients with a stomach ulcer and cholelithiasis began to feel much better after undergoing a course of therapeutic nutrition. In the diet room, the menu is served. Tourists celebrate a wide variety of dishes, the quality of the products from which they are cooked. There is always fresh fruit, sour-milk products. A special praise was given to the waiters of the dining room, which take into account all the wishes of visitors. There is also a cafe "Belochka" on the territory of the complex. 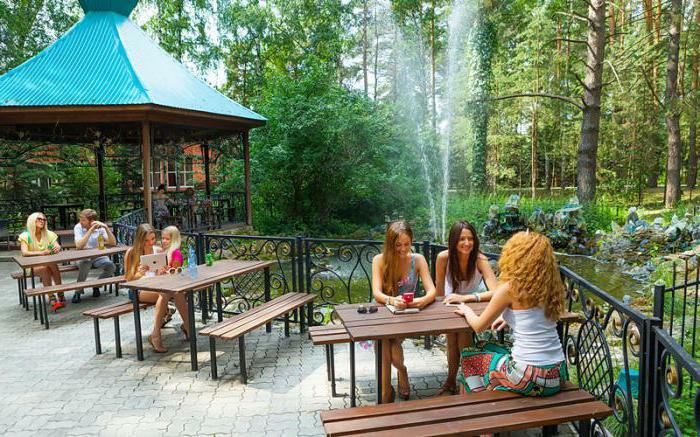 The health of a person in a sanatorium is at the forefront. Therefore, you will be offered the first cases to pass procedures that are not included in the cost of the voucher. These are different types of baths( radon, with turpentine emulsion, herbal, oxygen), mini-bath "Cedar casket", magnetoturbotron, hirudotherapy and oxygen cocktails. The health program "Radamir" deserves special attention. They offer patients to undergo complex diagnostics of the body. Another wellness program is figure correction and skin cleansing. On the territory of the sanatorium there is a beauty salon. You can rent for a fee skiing, sledges, bicycles, tennis rackets. There is also a guarded parking lot and a garage.

What's included in the permit

Sanatorium "Sosnovy Bor"( Kazan) accepts children from the age of three for treatment. Vouchers are calculated( if you want to achieve the effect in the fight against the disease) for eighteen days, and stay in the children's camp for three weeks. The smallest period that you can pay in the health center is five days. In the price of the tour includes accommodation in a room of the selected category, meals( according to the menu, with elements of a buffet or "all inclusive"), use of swimming pools( every other day for an hour), treatment. Also, guests can enjoy the animation, which is held in the sanatorium( discos, movies, etc.).In the health resort there is a library, which can also be used for free. The administration of the sanatorium takes care of the leisure of its guests. Hiking and bus tours are organized regularly. 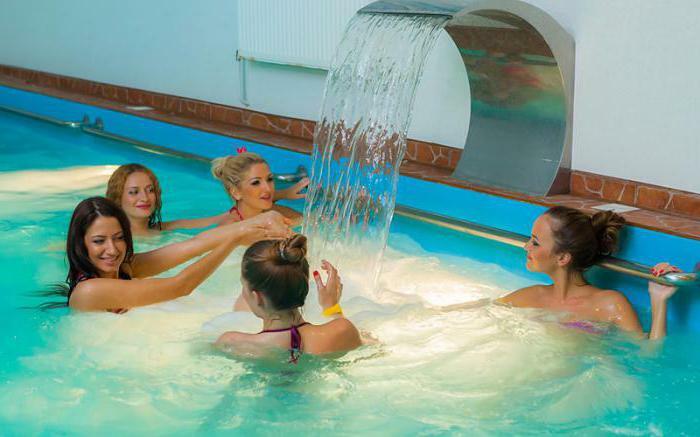 "Pine Forest"( Vasilievo) - a sanatorium, which carries out a policy of discounts. You can also come here for a free trade union ticket. Children under three years of age live at half the cost of the adult accompanying them. Discount for children from four to fourteen years is thirty percent. When settling in the building № 1, the "Swedish Buffet" meals are practiced. You can buy it for three hundred and fifty rubles a day. The night in the two-seater "Standard" will cost one thousand seven hundred. This is the lowest price."Lux" for two tourists will cost nine thousand four hundred rubles. If you go with the whole family, it is better to be accommodated in the apartment. They cost twelve thousand eight hundred rubles, but they can accommodate four people.

Sanatorium "Sosnovy Bor"( Kazan) was awarded various awards at all-Russian and republican competitions, such as "SamaraTourExpo" and "Tourism Industry".Also, the health center owns the diploma "Best in Tatarstan" for treatment and health services. But the most valuable prize of the sanatorium administration is the sign "Consumer Confidence".This award was presented in 2008.And the responses of ordinary tourists who visited the sanatorium, indicate that the prize was received not in vain. In the health resort very sincerely they treat guests, react sensitively to all their requests and wishes. Tourists celebrate the hospitality of the staff, as maids, waitresses in the dining room, and nurses on procedures and doctors. A lot of praise is heard in the address of placement. The rooms are clean, decorated in warm pastel colors. Beautiful territory of the sanatorium, seated with coniferous trees, did not leave anyone indifferent.