"Dermahil" - Korean cosmetics, based on growth factors and peptides, created with the help of genetic engineering. These are drugs created at the junction of cosmetology and cosmetics, which was called "cosmeceuticals".In Russia, such a concept does not exist, therefore, Dermahil specialists are inclined to consider medical cosmetics. Among the preparations for mesotherapy, Dermahil from the bags under the eyes became very popular. Reviews about him spread good. We will become acquainted more closely with this preparation and the opinions of experts about it.

A little about the manufacturer

The company Caregen began its existence in South Korea in 2001.The research department initially set itself the task of studying the growth factors of biometric peptides and human skin cells. This goal was quite understandable: understanding the processes of updating and controlling the division and growth of cells would allow us to reconsider views on the ways of skin rejuvenation. The company's research was not in vain: the synthesis of substances necessary for the regeneration of the dermis and epidermis was carried out. Clinical trials have confirmed the hopes of specialists: the drug works.

Already in 2004, the Dermahil brand was issued, which in a short time became known in almost every state. At present, it is a demanded product in the market of cosmetology and dermatological medicinal preparations."Dermahil" is a complex for mesotherapy and galvanotherapy, as well as funds in the form of creams, serums and other substances for home use."Dermahil" from bags under the eyes has become one of the most popular drugs for the treatment of fatty hernias and lightening of dark circles.

Why does swelling develop under the eyes?

In the life of every woman comes a time when it is already slightly under the "dtsat."Age changes somehow begin to manifest themselves. Under the eyes systematically in the morning "bags" are formed, and if earlier they were easily absorbed by themselves or with the help of creams, special massages, now they persistently remain in place. This period is characterized by the time of hernia formation. 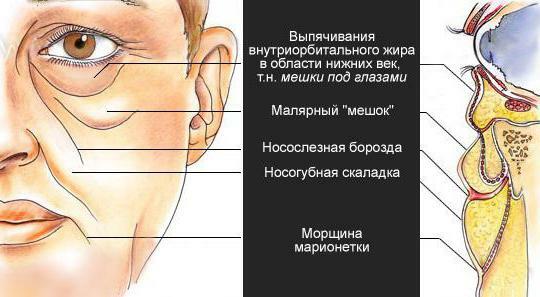 Why does this happen? Some of the fatty deposits, with the increase of which the hernia is formed, is contained in the area under the eyes since birth. Under the influence of certain factors( and not necessarily because of age-related changes), the fat mass begins to increase intensively. Specialists identify several reasons for such changes:

There is nothing left for surplus fat, how to advance into the lower eyelid region, in connection with which an unpleasant "bulge" under the eyes is formed. To treat a similar problem, cosmetologists increasingly use "Dermahil" from bags under the eyes. Reviews about the drug leave good both patients and specialists.

Mesotherapy of the area around the eyes

Mesotherapy is the process of introducing a cocktail of active directional components into the dermis of the skin. The procedure is carried out by introducing a specific amount of substance through a special syringe. Usually a series of injections is performed across the entire treated area at a short distance from each other. How to prick Dermahil from bags under the eyes or any other similar drug? The answer is very simple: only with the help of a qualified cosmetologist or dermatologist in the appropriate room for the procedure. Execution of mesotherapy itself is strictly not recommended: the damage caused to the skin by excessive independence, will be huge. 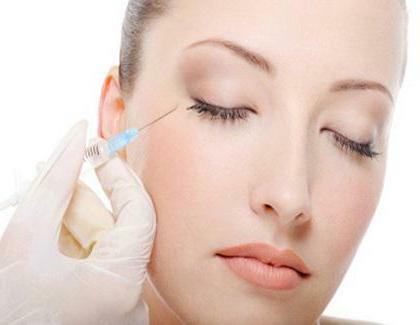 With the development of cocktails for mesotherapy, surgical treatment of bags under the eyes and other cosmetic and dermatological problems is practically not used. Active components of the drug are good at normalizing the processes occurring in the dermis and epidermis, which leads to a natural recovery of the skin. The effect remains for a long time.

Dermahil for the eye area

For the treatment of common skin problems around the eyes, the Dermahil brand represents two means for mesotherapy: Eyebag Solution and Dark Circle Solution. Both drugs are designed for use in a cosmetology room through injections.

Application Dermaheal Dark Circle Solution is recommended for the formation of dark circles under the eyes. The effect of the drug is directed to their clarification and prevention of further appearance. In addition, Dark Circle Solution helps to smooth wrinkles and improves microcirculation in the periorbital area. The drug can be used at any age according to the testimony of a cosmetologist.

Eyebag Solution is designed to treat more serious problems. For example, it is actively used to reduce the puffiness of the area under the eyes, as well as the resorption of fatty capsules that form "bags".The components of the drug improve the general condition of the skin and rejuvenate it.

Cocktail for lightening dark circles under the eyes destroys pigmentation, and also prevents the formation of new spots by reducing the synthesis of melanin. Due to improved microcirculation, the skin around the eyes receives the amount of nutrients it needs. In addition, peptide complexes help to smooth out facial wrinkles, which, without doubt, refreshes the look.

The composition of the cocktail includes: 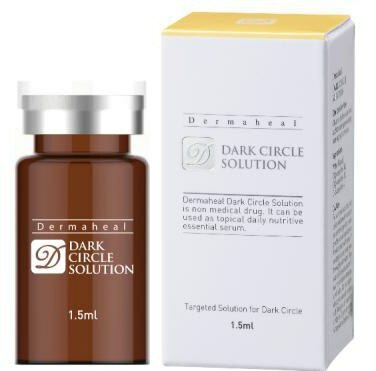 The drug is released in a glass vial with a volume of 1.5 ml, injected into the periorbital area. The course of treatment depends on the initial state of the skin. In standard cases, it is recommended to go through three procedures, alternating them with a weekly rest. The maximum number of procedures for one course of treatment is about 10. For preventive purposes after the end of the main therapy after 3 months, you can resort to 1-2 procedures at intervals once a quarter.

Indications and contraindications for use Dermaheal Dark Circle Solution

The need for mesotherapy should be confirmed by a cosmetologist. In addition, you should pay attention to the fact that the procedure has contraindications, in connection with which there is a need for compulsory consultation with the therapist or with the attending physician, in whom the patient is usually observed. The primary reception of a cosmetologist is also mandatory. Assessing the situation, a specialist can recommend a course of mesotherapy with the drug Dark Circle in the following cases:

You should pay attention to the contraindications. These are:

In any case, it is advisable to consult with a specialist who will accurately determine the need for the procedure, as well as the possible risks and consequences for health.

"Dermahil" from bags under the eyes - injections Eyebag Solution, which replaced their appearance with a scalpel in solving the problems of swelling and fat capsules in the periorbital area. The composition of the drug includes: 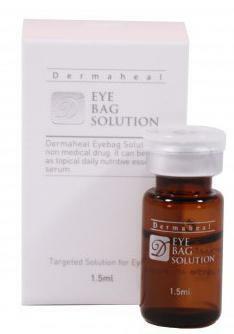 Acting in a complex way, they reduce the process of accumulation of adipose tissue under the skin, and also stimulate the reduction of existing fat capsules. After a while, the "bags" decrease in size, and even disappear altogether. Wrinkles around the eyes are smoothed out, and the color of the skin is leveled."Dermahil" from bags under the eyes of the professionals received good reviews: cosmetologists note that the drug helped to get rid of an unpleasant problem for most customers.

Indications and contraindications to the Eyebag Solution

The specialists who have become acquainted with the drug "Dermahil" often recommend it as a treatment for hernia periorbital area, as well as for the rejuvenation of the skin around the eyes. One should consider the Eyebag Solution cosmeceutical cocktail in cases, if in the periorbital area there is:

In addition, the drug is used and for preventive purposes at the first signs of aging and withering of the skin. 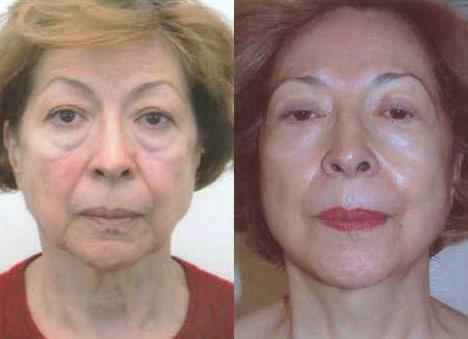 "Dermahil" from bags under the eyes of contraindication has the same as the preparation from dark circles. First of all, it is necessary to take into account the presence of infectious and oncological diseases, as well as the period of exacerbation of chronic diseases. The period of pregnancy and lactation is not the best time for applying mesotherapy. Allergy sufferers do not have to worry: peptides and growth factors in the composition of the drug have a 100% similar structure with components produced by the person themselves. The product is safe and does not form allergic reactions.

"Dermahil" from bags under the eyes: photo, form of release, course of application

Eyebag Solution is released in a bottle of soft pink color with a volume of 1.5 milliliters. For the procedure, the beautician uses a very thin needle, which is inserted to a depth of not more than 2 mm. It is worth preparing for the fact that the procedure of mesotherapy of the periorbital area is rather painful. For anesthesia, special gels or creams can be used. 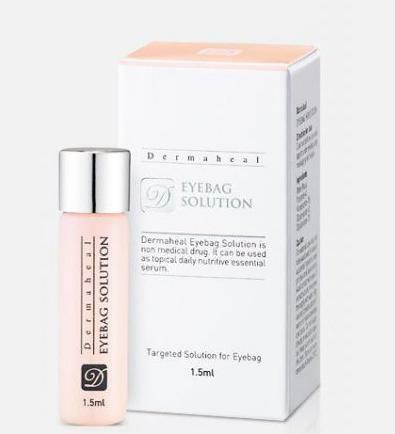 The course of treatment consists of 4-10 procedures, which are performed with interruptions of about 7 days. The effect can be noticed as early as a week after the first procedure. Depending on the result and the rate of skin regeneration, the total number of procedures for one course of treatment with Dermahil from bags under the eyes will be determined. Patients' feedback on the cocktail's effect is good: everyone sees a positive effect.

Serum from bags under the eyes for home use

The brand "Dermahil" has developed not only cosmetics for professional use, but also home series for the care of skin and hair. One of such positions of pharmacy cosmetics "Dermahil" is whey from bags under the eyes. Reviews this tool gets good: it is convenient to apply, it is really effective. 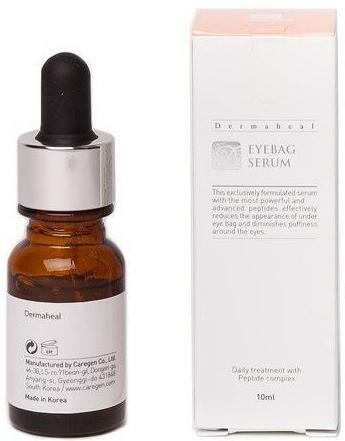 Active components of the product increase the elasticity and tone of the skin, smooth wrinkles, activate the lipoduction process. All this helps in time to prevent the formation of hernia periorbital space, reduce puffiness and improve the overall condition of the skin around the eyes.

"Dermahil" against bags under the eyes: reviews

Cosmetics "Dermahil" is very popular in many countries. Thanks to its natural composition, the preparations of this brand do not cause allergic reactions. In addition, the action of the components is long: the active substances of the cocktail stimulate and establish the natural processes of the body. Derma returns to normal life, which helps improve the condition of the skin and its youth."Dermahil" from bags under the eyes reviews of beauticians are good: experts are confident in the action of this drug, repeatedly making sure of its exceptional properties.

"Dermahil" from bags and edema around the eyes is a unique development that has practically no analogues. Thanks to this brand, women have the opportunity to choose between surgical treatment and mesotherapy with hernia periorbital space.