Effective analogues of "Diane-35" and reviews about them

One of the most reliable methods of contraception is currently considered oral contraceptive pills. They contain hormones that can prevent conception."Diane-35" is a hormonal complex contraceptive that has an additional antiandrogenic effect. The drug is used not only to prevent unwanted pregnancies, but also to treat certain pathological conditions. Analogues of "Diane-35" should be selected by a specialist.

Recently, a growing number of women choose hormonal contraceptives in the form of tablets for oral administration to protect them from unwanted pregnancy. Given the individual characteristics of the female body, you can choose the best remedy from this pharmacological group.

The most popular are combined monophasic hormonal contraceptives, represented by the "Diane-35" agent. Analogues of the drug can be structural( by active components) or have a similar mechanism of action. 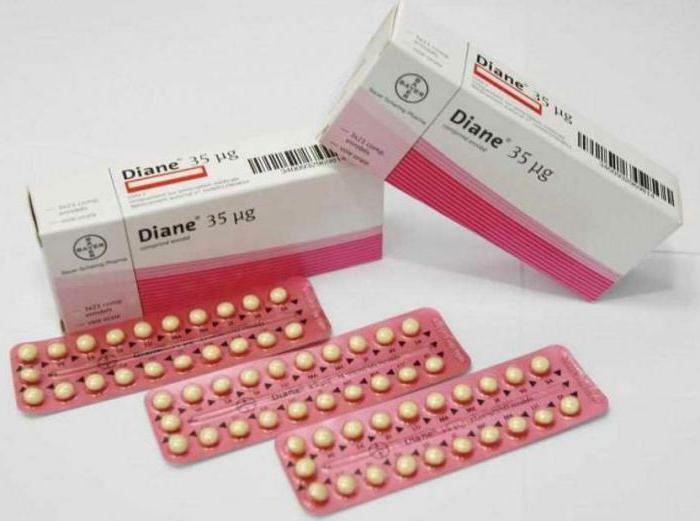 This drug has two active substances in the composition:

The first component is a synthetic analogue of the natural hormone estradiol. For the progestogenic effect, cyproterone, the synthetic derivative of the progesterone hormone, has an antiandrogenic effect.

Due to the complex effect of two substances, the ovulation process and the sperm patency are reduced by changing the structure of the mucous secretion.

Analogues of "Diane-35" with antiandrogenic effect are suitable for girls and women facing the problem of hyperandrogenism. The pathological condition occurs against the background of hormonal imbalance. With increased content of male hormones, the following symptoms develop:

For the treatment of pathology and the normalization of the hormonal background, gynecologists recommend that many patients take contraceptives based on two hormones."Diane-35" is one of the most effective drugs in this category. The contraceptive effect occurs on the 14th day after the start of the medication.

Structural analogues of "Diane-35"( with anti-androgenic effect) can also influence the synthesis of sex hormones. Reduces testosterone levels in the serum estrogens available in contraceptives. Suppress the production of the male hormone in the ovaries( by suppressing the secretion of gonadotropic hormones) estrogens in combination with progesterone. The duration of treatment with hormonal contraceptives with antiandrogenic action is at least 6 menstrual cycles.

How to choose an analogue of "Diane-35"

There is no difficulty in selecting a substitute for the original drug. Pharmaceutical companies offer a fairly large number of hormonal contraceptives in tablets that have several active ingredients in the formulation. Some birth control pills can be two- or three-phase. In such preparations, the concentration of the hormone estrogen will gradually increase by the middle of the menstrual cycle.

The most effective are the following contraceptives: 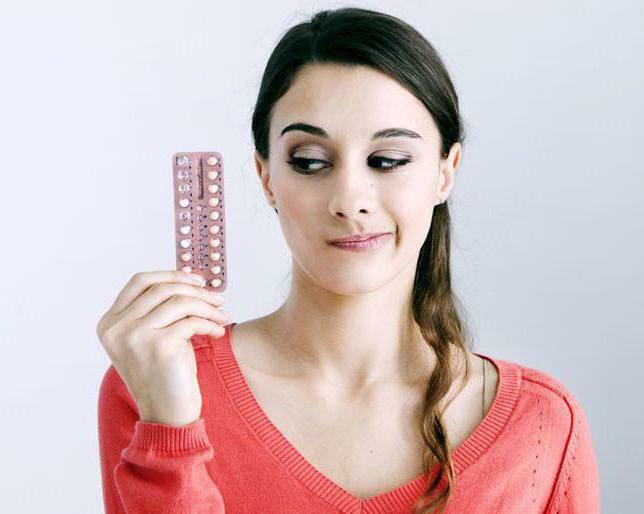 Any contraceptive a woman should be prescribed only by a doctor after the examination. In order to choose the optimal tool, it is necessary to undergo laboratory tests and ultrasound of the pelvic organs. And after the beginning of therapy, a woman is recommended to undergo a second examination after 3 months.

In case of side effects it is necessary to consult a specialist who will choose the best drugs - analogues of "Diane-35".The instruction of each hormonal contraceptive has a list of pathological conditions in which it is forbidden to take this medication.

Reviews of women about the popular analogue of the drug "Diane-35" confirm the high effectiveness of the drug. Gynecologists often recommend that they be taken to girls not only for contraception, but also for the treatment of acne. 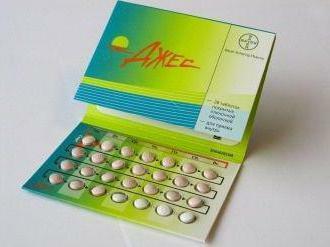 Tablets "Jess" have a similar mechanism of action and are low-dose. But according to reviews, it is not desirable to take the contraceptive on your own. Both doctors and patients note that without preliminary blood testing for hormones, taking medication can cause a lot of unpleasant side effects.

With incorrectly selected oral contraception, the skin may suffer, pimples may appear, the body weight may increase, in addition, periodic attacks of nausea, dizziness and vomiting are possible.

Some analogues of "Diane-35" can have a similar mechanism of therapeutic action and do not coincide in composition with the original. Anti-androgenic properties have the drug "Jeanine".Contraceptive pills are a low-dose monophasic agent. As active components they use substances such as ethinyl estradiol and dienogest( a derivative of nortestosterone). 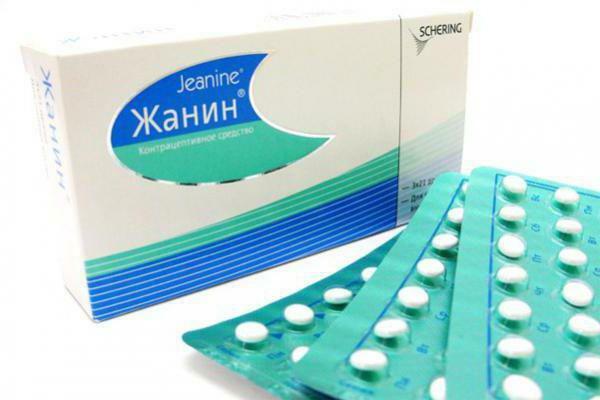 Reviews of the drug can often be heard from young nulliparous girls. It is this tool that is predominantly prescribed by specialists of this category of patients. The drug is well tolerated by the body, it rarely provokes a set of excess weight, significantly improves the condition of the hair and nails.

Reviews of the tablets "Chloe"

Any analogues of "Diane-35" have both advantages and disadvantages. In cases where the hormonal drug the girl began to take without a preliminary examination, the likelihood of side effects is significantly increased.

So, about the development of some unpleasant symptoms on the background of taking the tablets "Chloe" warned about the comments of women and doctors. Most often, this condition occurs when the rules for selecting hormonal contraceptives are not observed. 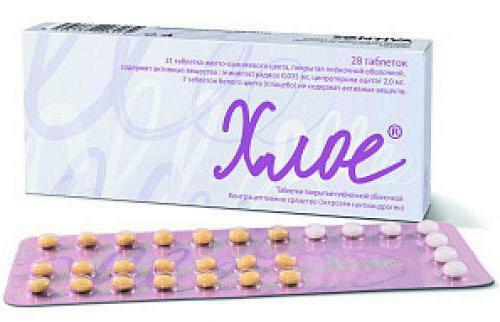 Some doctors recommend the preparation "Chloe" for normalizing the menstrual cycle, removing symptoms of PMS, rashes on the skin. And if the drug has been prescribed correctly, a positive result should be observed after a month of taking the contraceptive.

Some girls, by the way, talk about such a pleasant side effect caused by the drug, like an increase in mammary glands. In addition, "Chloe" is really able to help get rid of pimples and improve the work of the sebaceous glands.

According to experts, oral contraceptives are convenient to use. The effectiveness of such tablets is 99%.The minimal doses of hormones in the composition contain many substitutes for the drug "Diane-35".

Analogues of the new generation can be three-phase, that is, the concentration of hormonal substances in them varies throughout the cycle. This allows you to maintain the normal rhythm of the menstrual cycle and not to break the hormonal background.

Many girls face such a choice. It should be borne in mind that doctors do not recommend hormonal contraceptives themselves. The optimal means is selected by a specialist after collecting anamnesis and the results of laboratory studies of the patient.

The gynecologist takes into account the character of menstruation, the duration of the cycle, the propensity to premenstrual pains, the development of mammary glands, in order to correctly choose oral contraceptives. 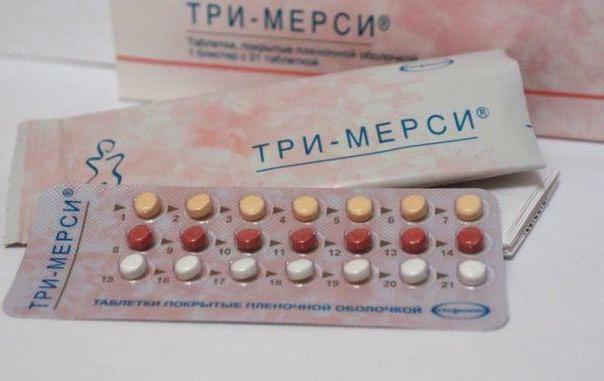 Drugs with anti-androgenic effect and protection from conception are suitable for many women. Almost no side effects and the means of "Diane-35".Analogues are cheaper not always well tolerated and can provoke the development of some undesirable consequences:

"Tri-Mersey" is a fairly inexpensive and effective contraceptive. The cost of tablets is 820-880 rubles. Many women who take this drug, say about its positive effect on the skin condition. Side effects of "Tri-Mersey" is extremely rare. 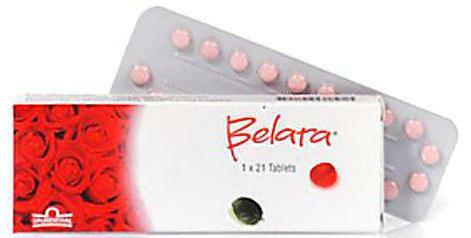 "Belara" is another popular anti-androgenic hormone. Tablets contain the same amount of hormones in the composition, that is, the drug is monophasic, like some other analogues of "Diane-35".

Reviews of specialists suggest that taking this medication practically does not lead to weight gain. Women who took "Belarus" note the positive effect of the drug on the hormonal background and the removal of unpleasant symptoms of hyperandrogenism. For some girls, this drug was the best contraceptive.

It should be taken into account that most hormonal contraceptives are forbidden to take with thrombosis of veins and vessels, diabetes, severe stages of arterial hypertension, chronic liver pathologies and pancreatitis.