Biomechanism of labor in the anterior form of the occipital presentation. Midwifery allowance in childbirth According to research, the primipara head advances slightly during pregnancy. The degree of this progress depends on the ratio of the size of the fetal head and pelvis of the mother. In some people, the fetus stops its movement in the entrance, and in some - already in the expanded part of the cavity of the small pelvis. When the birth begins, the head resumes its advancement at the appearance of the first fights. If the birth canal obstructs the progress of the fetus, the biomechanism of labor in the anterior form of the occipital presentation takes place in the pelvic area where the obstruction is encountered. If the birth occurs regularly, the biomechanism is turned on when the head passes the boundary between the wide and narrow part of the pelvic cavity. To cope with the obstacles that have arisen, there are few uterine contractions alone. There are attempts, pushing the fruit on the way to the exit from the birth canal.

In most cases, the biomechanism of labor in the forward view of the occipital presentation is used during the ejection phase, when the head passes into the narrow section of the small pelvic cavity from the wide one, although in the primiparas everything can begin at the time of opening, when the fetal head is in the entrance.

During the process of expulsion of the fetus, the fetus and uterus constantly interact with each other. The fetus tries to stretch the uterus in accordance with its shape and size, while the uterus tightly covers the fetus and amniotic fluid, adapting it to its shape. As a result of such actions, the fetal egg and the entire birth canal are as close as possible to each other. So there are prerequisites for the expulsion of the fetus from the birth canal. 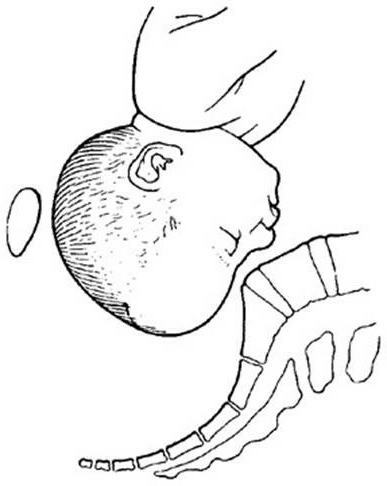 moments The biomechanism of labor in the forward view of the occipital presentation is conventionally divided into four parts:

Bending the head is that under the influence of intrauterine pressure, the cervical spine bends, bringing the chin to the chest, and lowering the neck down. In this case, a small fontanelle is located below the large fontanelle, gradually approaching the wireline of the pelvis, and this part becomes located below the entire part of the head. 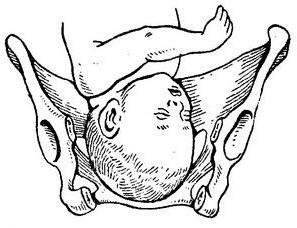 The benefit of this flexion is that it gives the head the ability to overcome the small pelvic cavity with the smallest size. The direct size of the head is 12 cm, and the small oblique resulting from flexion is 9.5 cm. True, in the normal course of labor, the need for such a strong flexion of the head does not arise: it bends as much as it needs to go from wide toa narrow section of the pelvic cavity. The maximum flexion of the fetal head is required only in situations where the width of the birth canal is insufficient to pass the head. This happens when the pelvis is too narrow, as well as in the case of the back view of the occipital presentation.

Flexion is not the only fetal movement in this moment of birth biomechanism. At the same time, the head moves forward through the birth canal, and after the end of the flexion, its internal rotation begins. So at the first moment of the birth biomechanism, a combination of translational motion with flexion and rotational motion takes place. However, since the most pronounced motion is the bending of the head, the name of the first moment reflects this fact.

Moment of the second 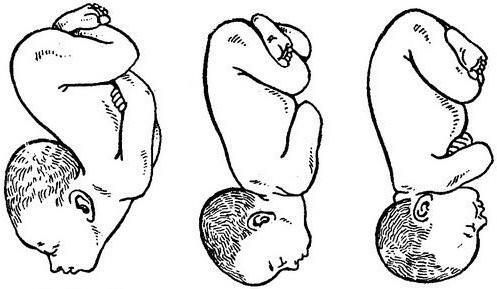 The fetal head, moving forward in the cavity of the small pelvis, encounters resistance to further movement and begins to rotate about the longitudinal axis. There is as if screwing the head into the pelvis. This occurs most often when it passes from a wide to a narrow section of the pelvic cavity. The nape slides along the wall of the pelvis, approaching the lone articulation. This moment can be fixed, keeping in mind how the position of the swept seam changes. This seam before the turn is in the small pelvis in the transverse or oblique size, and after the rotation is located in a direct size. The end of the turn of the head is noted when the sagittal suture is set in a direct size, and the suboccipitary fovea assumes a position under the lobar arch. 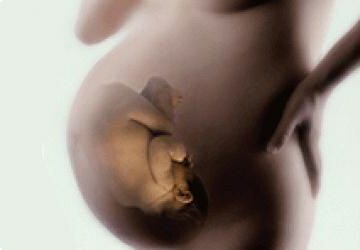 Extension of the head. The head continues to move along the birth canal, beginning to gradually unbend. At normal sorts the extension is carried out in an exit of a basin. The nape emerges from under the lumbar arch, and the forehead protrudes beyond the coccyx, protruding in the form of a dome of the posterior and front parts of the perineum.

The suboccipitary fossa rests on the lower edge of the pubic arch. If at first the extension of the head passed slowly, at this stage it accelerates: the head unbends in just a few attempts. The head penetrates through the vulval ring on a small oblique its size.

In the process of extension from the birth canal, the crown, the frontal region, the face and chin appear in turn.

The moment the fourth 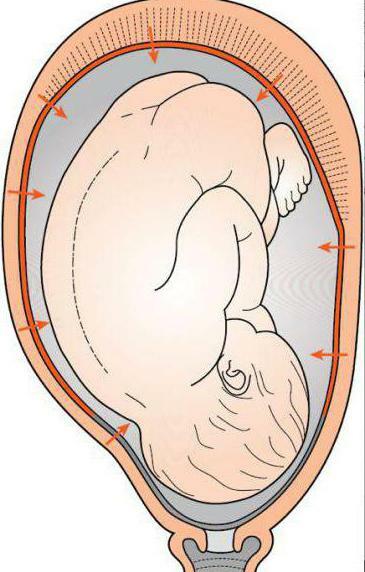 External turn of a head with internal turn of a trunk. While the head follows along the soft tissues of the pelvic outlet, the shoulders are screwed into the pelvic canal. The energy of this turn is obtained by the born head. At this moment, the back of the head turns to one of the mother's thighs. The front shoulders come first, behind it with a slight delay due to the bending of the tailbone, a rear shoulder is born.

The birth of the head and shoulders is sufficient to prepare the birth canal for the appearance of the rest of the trunk. Therefore, this stage is quite easy.

The considered biomechanism of labor in the forward view of the occipital presentation for the primiparous is completely correct for the re-birth. The only difference is that the reproductive onset of biomechanism in the reproductive cells occurs during the period of exile, when the waters have departed.

In addition to biomechanics, it is necessary to use obstetric care in childbirth.

Not everything can be relied upon in nature. Even if the mother has relatively normal births in the occipital presentation, an obstetrician may be needed. 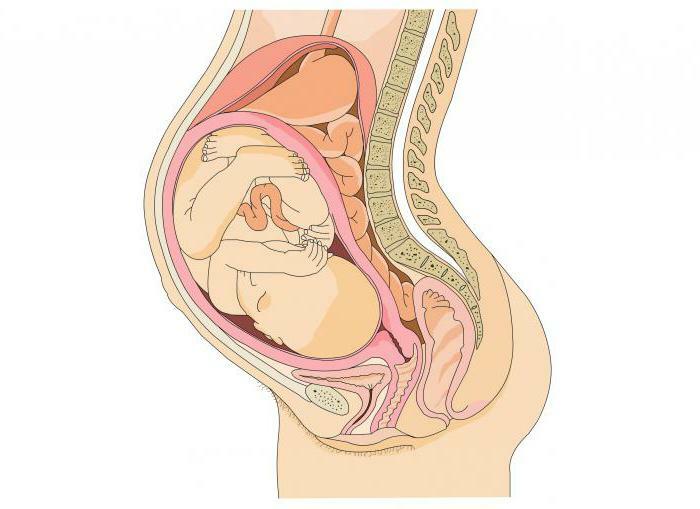 The order is as follows. With the completion of the attempt, the vulvar ring is gently stretched with the fingers of the right hand over the birth head. Stretching is interrupted with the beginning of a new attempt.

These actions, aimed at obstetric care, need to be alternated until the head approaches the parietal tubercles to the genital pore, when the compression of the head grows and the perineum stretches. As a result, the risk of injury to the fetal head and the parturient child is increased.

The third point of the is to minimize the perineal strain as much as possible to increase the yield of the penetrating head. The obstetrician gently presses the tips of the fingers on the tissues surrounding the genital opening, directs them towards the perineum, which makes less of her tension.

The fourth moment - adjustment of attempts. The time of appearance of parietal tubercles of the head in the genital gaps carries an increased risk of rupture of the perineum and traumatic compression of the head.

Equally great danger is the complete cessation of attempts. An important role in this is breathing. The parturient is told to breathe deeply and often with her mouth open to ease attempts. When there is a need in the attempt, the mother gives a little labor. By the method of initialization and termination of attempts, the midwife controls the birth of the head at the most crucial time.

The fifth moment of is the appearance of the shoulders and torso. After the head emerges, the parturient woman needs to strain. Shoulders are born, as a rule, without the help of an obstetrician. If this does not happen, the head is gripped by hands. The palms of the hands touch the temporo-buccal areas of the fetus. The head is first pulled down to the appearance of one of the shoulders under the lumbar arch.

Next, the left hand grasps the head and rises, and the right crotch shifts from the back shoulder, which is carefully removed. After releasing the shoulder part, lift the trunk upwards behind the axillary cavities.

In some cases, perineotomy is performed to prevent intracranial trauma if the perineum has become obstinate.

Although childbirth demonstrates biomechanism in the forward view of the occipital presentation, complications can also occur. The size of the pelvis greatly influences the possibility of successful delivery. Complicated births occur if the woman has a narrow pelvis. This pathology is quite rare. It serves as an excuse for the decision to conduct a planned cesarean section. There are other adverse factors that can complicate labor: a large or born fetus. In these cases, a planned caesarean section is often chosen. In a number of cases, the need for the end of labor through a cesarean section appears only in their course.