It's hard to find a person who has never encountered a headache or a toothache. To stop the pain, it is almost always necessary to take pills. One of the most effective drugs is Imet. Instructions for use recommends this analgesic for symptomatic treatment for various ailments. Let's consider in more detail, in what situations it is necessary to take medicine, possible side effects and analogues.

Medicated "Imet" refers to non-steroidal anti-inflammatory drugs and is intended to eliminate pain syndromes of various etiologies. As the active ingredient is used the derivative of phenylpropionic acid - ibuprofen. 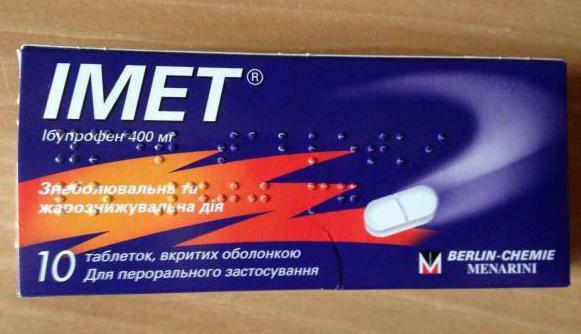 An anesthetic drug "IMET"( tablets) has long been known in the pharmaceutical market and is popular with consumers. The analgesic belongs to the category of highly effective and safe, which is an essential advantage of the drug. The German pharmaceutical company Berlin-Chemie AG is producing the medicine.

The average price of Imet is 350 rubles.for packing( 10 tablets).

Manufacturer produces the drug "Imet" exclusively in the form of tablets, as indicated by the official instruction. The secret of rapid therapeutic action, which renders the remedy, lies in the structure of the tablet. It is designed specifically for the rapid decay and release of the active substance. According to clinical studies, when ingested in the stomach dissolution of the coat occurs within 1 minute. Available for absorption ibuprofen becomes after 5 minutes.

The patient can feel relief of the symptoms of the pain syndrome within 10-15 minutes after taking Imeth.

The components that are present in the drug are of considerable importance when choosing a drug to eliminate various types of pain. As an analgesic, the manufacturer uses the substance ibuprofen. One tablet contains 400 mg of the active ingredient and some auxiliary constituents: magnesium stearate, silicon dioxide, povidone, corn starch, macrogol, sodium salt.

How does ibuprofen work?

In recent years, analgesic preparations based on ibuprofen are popular. This is primarily due to the safety of the substance, which was confirmed during the research. In comparison with the usual acetylsalicylic agents ibuprofen has a minimal negative effect on the digestive tract. In the case of an overdose of the drug, the risk of getting serious consequences is virtually excluded. 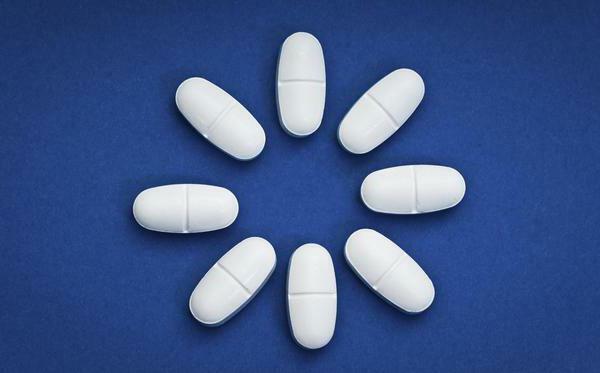 Reduction of stimulation of pain receptors occurs due to a decrease in the number of prostaglandins, a decrease in the synthesis of bradykinin at the site of inflammation. Also, ibuprofen is characterized by antiplatelet activity( blocking of platelet aggregation).

Ibuprofen is referred to the analgesics of the first line. Preparations based on it are well tolerated by the body and therefore recommended to use more often than others. Tablets "Imet"( instructions for use confirm this), in addition to anesthetic, have anti-inflammatory and antipyretic effect.

When should I take Imet?

The main purpose of the drug is to eliminate pain syndrome and alleviate the condition of the patient. The drug can be used for various inflammatory processes, which are accompanied by pain. 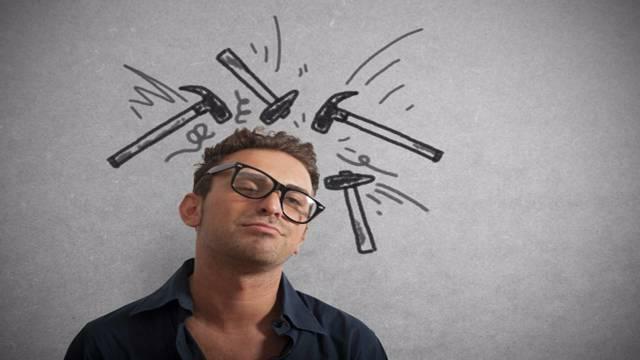 "Imet" is suitable for symptomatic treatment in the following pathological conditions:

After the vaccination( with an increase in body temperature), you can use the drug "Imet".Indications, according to the instruction, contain information that the analgesic is often used as part of complex treatment.

"Imet" in the treatment of headache

Even an absolutely healthy person can face a headache, which is often so pronounced that indefinitely can disable. Coping with painful sensations in different areas of the skull is difficult enough, and therefore most people prefer to stop attacks with the help of medications.

Headache can manifest itself as an independent disease or develop against a background of other, more serious disorders in the body. This is one of the most frequent symptoms with which patients seek medical help. The doctor, in turn, needs to establish the type of headache that further treatment will depend on. Medication "Imet" instructions for use recommends taking patients with a primary headache. 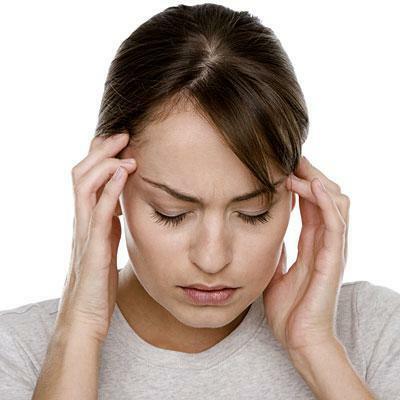 "Imet" can be taken to relieve pain at elevated body temperature. The duration of therapy should be determined by the doctor, taking into account the condition of the patient.

Features of use during pregnancy

Headache or aching toothache can overtake a woman and during child bearing. Being in an interesting position, you should take a responsible approach to taking medications and choose those that do not have a negative impact on the development of the fetus. One of the safest drugs able to cope with the pain syndrome and not harm the baby is "Imet".The manufacturer allows you to take pills based on ibuprofen in the first and second trimester of pregnancy, but only after a preliminary consultation with your doctor.

Despite the fact that the active substance of "Imet" tablets is considered safe, there are some contraindications to its use. To avoid negative consequences for all patients, it is recommended that you first familiarize yourself with the drug's instructions. The drug "Imet" is forbidden to take in the following cases:

With extreme caution, it is allowed to take the drug for elderly people who are in parallel receiving non-steroidal anti-inflammatory drugs. Increased burden on the body is fraught with the development of internal bleeding, perforation of the organs of the digestive tract and irreversible consequences( death).

Patients with peptic ulcer should be given a minimum dosage when prescribing the drug and do not increase it without first visiting a specialist. If you have any symptoms that have occurred while taking Imet tablets, you should immediately inform your doctor.

Patients with hypertension should be under constant monitoring, taking non-steroidal anti-inflammatory drug "Imet".The active ingredient can cause fluid retention in the body, which in turn is displayed at the level of blood pressure. Simultaneous administration of antihypertensive drugs and "Imetah" will cause a decrease in the medicinal effect of the first. Before prescribing an analgesic, a specialist should evaluate the relationship of possible benefit and risk to a patient with autoimmune diseases.

"Imet": instructions for use

Tablets are for oral use only. In this case, they can not be chewed or pre-ground. When a doctor prescribes a lower dosage, the tablet can be divided. To reduce the risk of side effects( especially in patients with ulcers) should take the pill during or after a meal. The medicine should be washed down with plenty of water. 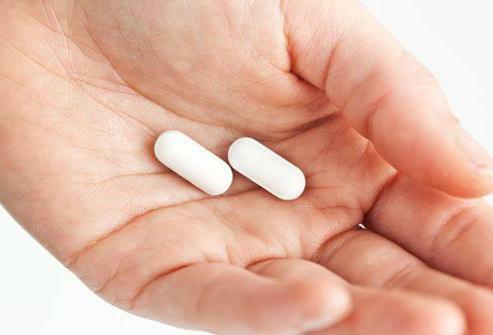 According to the instructions, "Imet" adults and children over 12 years can take three meals a day for 1 tablet. The dosage can be reduced by the attending physician, and it is not recommended to raise it by yourself. The daily dose should not exceed 1200 mg( 3 tablets).You should also observe the minimum interval between doses of the drug, which is 4 hours.

In order to reduce body temperature, the manufacturer recommends taking once 200-400 mg of the drug. In the absence of a therapeutic effect, it is necessary to take an additional dose of the drug not earlier than 4 hours later.

It should be noted that "Imet"( reviews of the drug patients leave more positive) is not able to eliminate the true etiology of the pain syndrome, but only removes the symptoms characteristic of the pathological condition. The drug is not allowed for a long time. If signs of an illness persist, you need to immediately seek medical help.

. Referring to non-steroidal anti-inflammatory drugs, Imet can cause quite serious negative consequences. Sometimes there were complaints of patients from the digestive tract, manifested in the form of abdominal pain, heartburn, vomiting( rarely), diarrhea, dyspepsia. With prolonged admission, the risk of ulcer disease( intestine, stomach), exacerbation of existing pathology, colitis, gastritis is significantly increased. 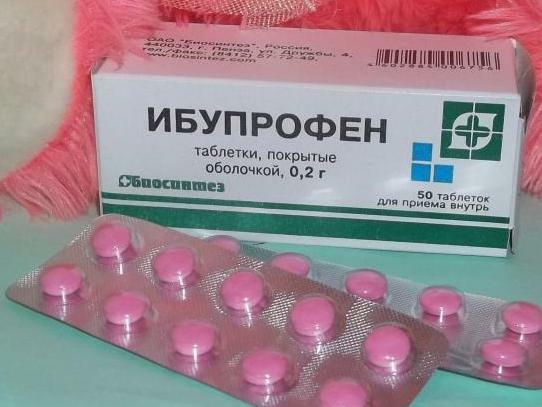 Patients who have a history of hypertension, in rare cases, noted the appearance of a negative impact on the kidney and urinary system. Side effects occurred in the form of edema of the lower extremities, kidney syndrome. In the process of drug treatment, such patients are obliged to constantly monitor the work of the kidneys and take laboratory tests of urine.

The most common side effects are related to malfunctions in the central and peripheral nervous system. Disturbances are manifested in the form of dizziness, drowsiness, increased symptoms of migraine, irritability, increased nervousness, unreasonable anxiety. 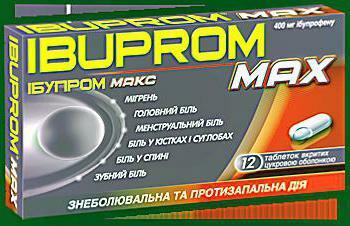 To choose an analogue of the drug is necessary only with the help of a doctor who can take into account the individual characteristics of the patient's body and accompanying pathologies.