To date, Down's syndrome is the most common genetic abnormality. The foundation of this disease is laid at the time of the formation of the ovum or sperm. A child who has this problem has a slightly different chromosome set. It is abnormal. If the usual baby has 46 chromosomes, then the child-down has 47.

The causes of the appearance of the disease are not yet fully understood. However, doctors from all over the world came to a unanimous decision. They argue: the older the woman who gives birth, the higher the risk of the birth of a child with this ailment. In this case, the sex of the baby, the age of the father and the environment of residence do not matter. 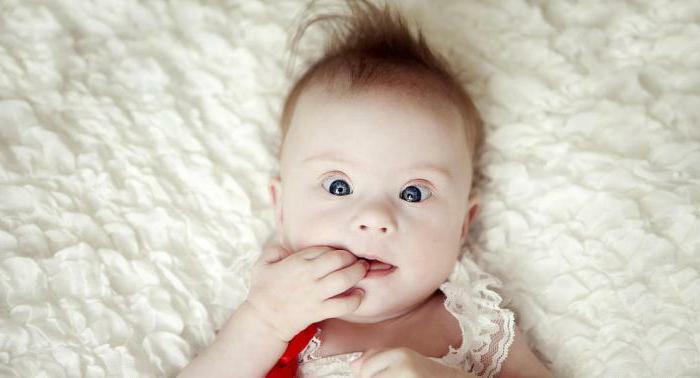 The most dangerous age for a woman is after thirty-five years. The probability of the birth of a baby with the wrong set of chromosomes increases several times. This is especially true of families who already have such a "sunny baby".Symptoms of Down's syndrome in a newborn child appear in the womb. On the twelfth week of pregnancy, ultrasound can show a pathology. But this is not a guarantee that the baby will be born unhealthy. The exact result can be found only after delivery. But this is not enough. To confirm the diagnosis or exclude it, you need to conduct special examinations. External signs of Down syndrome in newborns are not always a confirmation of deviation.

Down Syndrome: signs in newborns

The term "syndrome" in medicine means a combination of symptoms that manifest themselves in a particular condition of a person. In 1866, scientist and physician John Down grouped a complex of symptoms in a certain group of people who have this disease. In honor of this person, and called the syndrome. 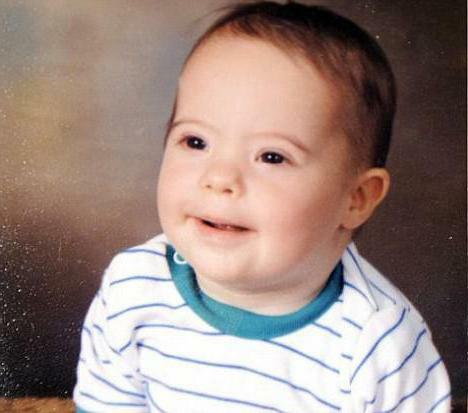 The most common signs of Down's syndrome in a newborn are noticeable immediately after birth. Such children, unfortunately, come into the world quite often. For every seven hundred newborns, there is one child with Down syndrome. In this case, most babies show the same signs:

Such features are characterized by Down syndrome. Almost all signs are associated with deformation of the skull and facial features, as well as with disorders of bone and muscle tissue. However, there are other signs. They do not meet so often.

Down syndrome( signs in infants are very often manifested already in infancy) can be diagnosed, focusing on other indicators. Among them:

These signs of Down's syndrome in a newborn can not manifest immediately, but as it grows up. By the way, with age, the child often has problems with the cardiovascular system.

Something that is not noticeable at first sight

Even the above signs can not always guarantee the fact that the baby has Down's syndrome. Signs in newborns may not only be clearly visible. Doctors diagnose also internal differences, which can not be detected immediately when a baby is born. In the future, doctors should pay attention to such factors: 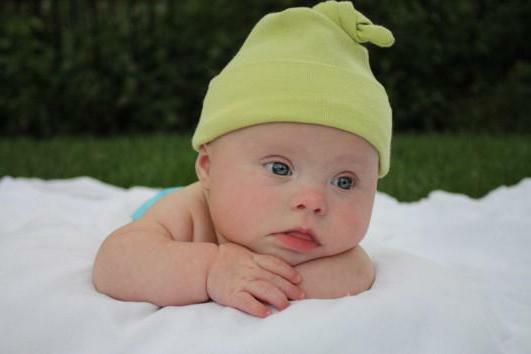 All of them can talk about a chromosomal abnormality. Such signs of Down's syndrome in a baby are found only in ten cases out of a hundred. Also, some children noticed the presence of two fontanelles. In addition, they do not close very long. It is established that all children with this anomaly are very similar to each other. And the features of parents in their appearance are usually not visible.

There are several methods to detect this anomaly:

Symptoms and symptoms of Down's syndrome in a newborn may differ. It is generally accepted that the deviation is characterized not by two, but by three copies of the twenty-first chromosome. But there are also other forms of pathology. About them is also very important to know. First, this is the so-called Down's family syndrome. It is characterized by the attachment of the twenty-first chromosome to any other. This deviation is quite rare. It occurs in about three percent of cases. 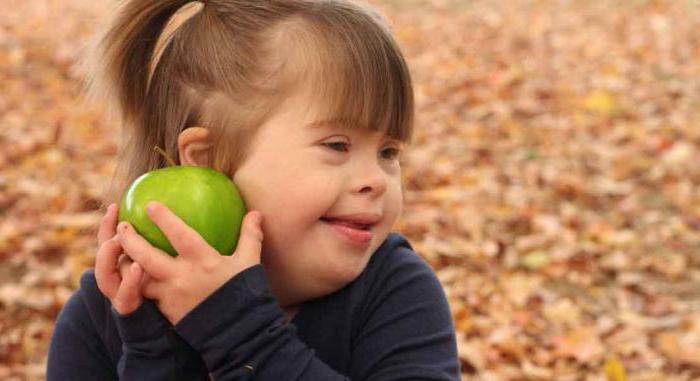 Mosaic syndrome occurs when the extra chromosome does not contain all the cells of the body. This anomaly occurs in five percent of patients. Another type of syndrome is the duplication of part of the twenty-first chromosome. Occurs pathology infrequently. This deviation is characterized by the fission of some chromosomes.

Signs from the fetus

Newborns with Down syndrome are often found. Signs can be identified not only from the child who has appeared, but also from the fetus. This deviation, as already mentioned, can be seen on ultrasound between the twelfth and fourteenth weeks of pregnancy. In this case, check not only the thickness of the collar zone, but also the size of the nasal bone. If it is too small or absent completely, this indicates the presence of the syndrome. The same can be said about the collar zone, if it is wider than 2.5 mm. 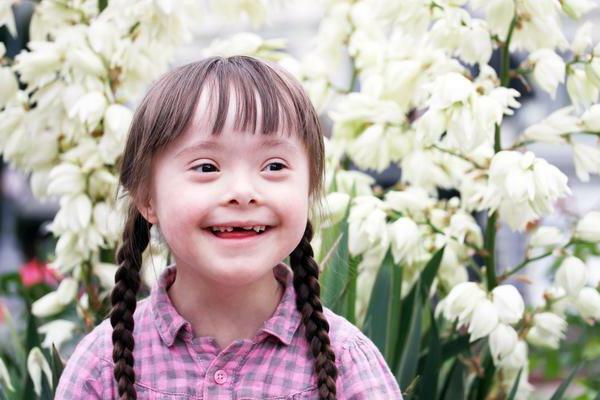 In later terms, you can see not only this pathology, but also others. But patients should understand that it is impossible to accurately detect the disease in the fetus. It is proved that 5% of the signs seen on ultrasound may be false.

Newborn children with Down's syndrome: signs in a child

Many parents are too puzzled by the appearance of their baby. However, this may hide many other serious problems. Such children are susceptible to many diseases. They can suffer from such ailments:

Thanks to modern technology, a woman learns about the presence of chromosomal pathologies in the fetus. In the early term, the mother can interrupt the pregnancy, thus depriving the life of an unborn baby. Down syndrome is not a fatal disease. But the mother of the child can determine in advance his and his fate. To date, this chromosomal abnormality is a fairly common phenomenon. You can meet a person and do not even believe that he has Down syndrome. Of course, it is a little more difficult to bring up such a child. His life will be different from that of other children. But no one says that he will be unhappy. Only the mother has the right to decide his fate. 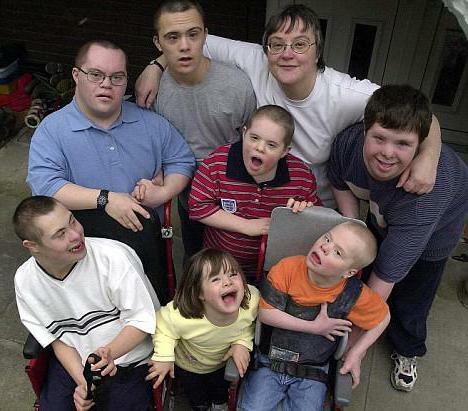 It is important for the father and mother of the "sunny kid" to remember the following truths:

Down Syndrome( signs in newborns have been mentioned in this article) allows children to grow, develop and enjoy life. Our task is to support them, give them attention and love.