To perform the research of the body, methods based on X-ray beams are used. The introduction of a contrast agent into the human body enhances the possibilities of diagnosis. Adding iodine molecules to the drug increases their effect.

The "Urographin" medication is used as an instruction for radiographic contrast diagnostics with ionic structure. It is injected into the vessels and cavities. 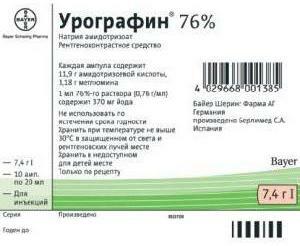 The drug refers to injectable solutions, is available as a clear, colorless or slightly colored liquid.

In the "Urographin" medication, the instruction for use determines the active components based on the acid 3,5-bis( acetylamido) -2,4,6-triiodobenzoic. The composition includes two of its salts: sodium and meglumine. There are two dosages of the drug at 60 and 76 percent.

To obtain a stable solution, inactive ingredients are used in the form of calcium sodium edetate, sodium hydroxide and aqueous injection medium.

The drug is packaged in 20 ml in ampoules.

"Urographin" medication instructions for use refer to preparations that increase the contrast of the image due to the absorption of X-rays by iodine ions, which are included in the amidotrizoate salts.

To use the drug, you need to know the characteristics of the injection solution, relating to osmolality, viscosity, density and the value of the hydrogen index.

Contains all the above data for the drug "Urografine" instructions for use. Analogs in the form of preparations "Triombrast" and "Trazograph" are also used as radiopaque diagnostic tools that contain iodine particles. 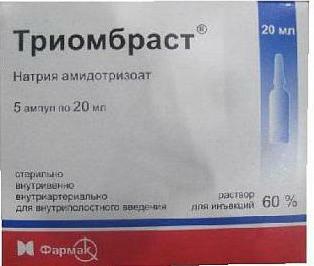 With the introduction of such a drug, the organ image becomes more contrast.

For what is used

The drug is taken before intraoperative cholangiography, sialogram, fistulography, hysterosalpingography.

Before using Urographin 76, the instructions for use advise you to prepare the patient in advance. A thorough gastric purification is required for angiographic examination of the abdominal organs and urographic procedures. Two days before manipulation, do not take food that causes bloating. These products include legumes, salads, black and fresh baked goods, raw vegetables.

Before the examination, you can have dinner no later than 18 hours, after which you take laxatives. The last recommendations do not apply to young children.

Excitement, bouts of pain intensify the reactionary processes to the medicine, so the person is calmed psychologically by talking or using medication.

In myeloma, increased blood glucose in the bloodstream with impaired renal, polyuria, oliguria, hyperuricemia, kids and the elderly are conducting hydration manipulations to restore the water-electrolyte level.

The ready-made "Urografin" preparation is recommended for use only when the physical properties of the solution are maintained. If there is a deposit, the shade has changed or there are damage to the packaging, it is not used. The liquid is collected before administration, and the remnants of the solution are disposed of. 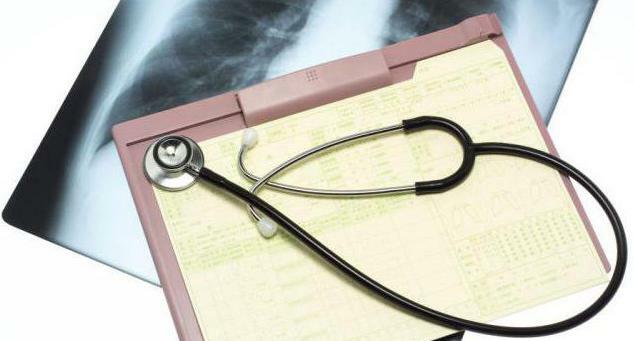 Dosage is determined by age, body weight and overall well-being of a person. If the kidneys or heart work insufficiently, the minimum amount of medication is used. After the procedure, these organs should be monitored for three days.

For the conduct of angiographic events, a continuous catheter rinse is required with saline to prevent thromboembolic risk. When the drug is injected into the vessels, it is necessary to provide a recumbent position. After half an hour after the injection, the patient is carefully watched to identify the side processes in time.

To confirm the disease, repeat the use of the agent in large quantities at intervals of 10 to 15 minutes to compensate for increased serum osmolarity with interstitial fluid. With the introduction of a single adult dose of 0.300 to 0.350 liters of drug, electrolyte solutions must be poured.

The "Urographin" medication instructions for use advise to heat up to 36 degrees, which will allow the contrast agent to be injected and easier to tolerate due to a decrease in viscosity. Not all ampoules are heated, but only the right amount.

This tool is not pre-tested due to unreliable results.

tests With intravenous urographic diagnosis, the drug is administered in 20 ml per 1 minute. If there is a violation of the cardiac function, the medication is administered more slowly, which is half an hour.

An adult patient is assigned 0.02 liters of "Urographin 76" or 0.05 liter of a 60 percent drug. Increasing the amount of the drug with a higher concentration to 0.05 L contributes to the improvement of diagnostic accuracy.

Photos of the renal parenchymal tissue are made at the end of the injection for better display. To visualize the structure of the pelvis and urinary tract, 1 photo is taken after 5 minutes, and 2 - 12 minutes after the infusion of fluid.

With the infusion of 0.1 liters of medication, the duration of the procedure is from 5 to 10 minutes. To people with myocardial diseases such quantity is poured into the veins for half an hour. The first photos are taken at the end of the introduction, and the following are carried out for 20 minutes.

When X-ray examinations of the circulatory system, when carrying out aortography, angiocardiography or coronary angiography, use high doses of the drug "Urografine".Application of a solution of 76% is preferred. The amount of medication is determined by age characteristics, weight, minute volumes of the heart muscle, general well-being, methods of holding.

The urinary system is studied using a retrograde urographic examination, in which the contrast agent is administered by a catheter method into the urethral lumen. A 30 percent liquid is used, which is obtained by diluting a 60 percent solution with injection water in a ratio of 1 to 1. In order to avoid spasms in the ureter when irritating with a cold medicine, the contrast preparation is heated to 36 degrees.

For some surveys it is necessary to inject 60% undiluted agent. High dosing of the medication sometimes causes irritating symptoms. 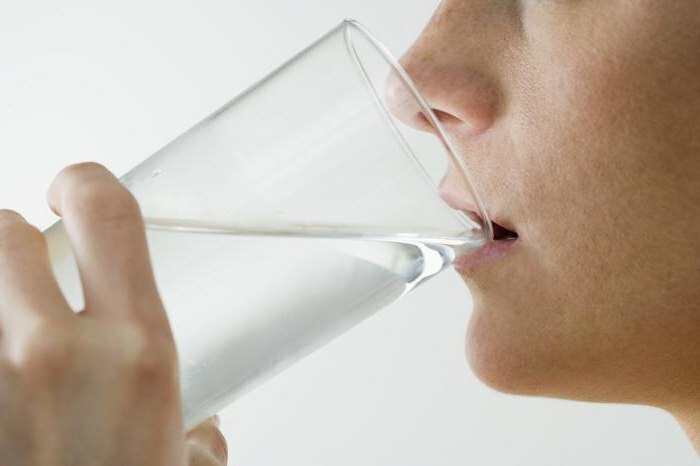 The agent is administered under fluoroscopic control to perform arthrographic, hysterosalpingographic examination and retrograde cholangiopancreatography.

How to drink the preparation

To perform tomography of the computer parts of the intestines and other organs, doctors prescribe oral administration of the drug "Urografine".Instructions for oral use do not recommend taking, it does not describe this method of use. If the attending physician has not notified the patient of the rules of use and dosing, the patient will find it difficult to find information.

Health professionals recommend that before the tests drink a solution of "Urografine".Instructions for use for CT indicate that the contents of one ampoule( 20 ml) must be diluted with one liter of clean water, take this liquid in stages.

The use begins 24 hours before the diagnosis, as a result of which the intestine and other organs are contra-strated. The last 200 ml of the "Urografine" solution is recommended for CT introduction when entering the room. Preliminary sample for oral use is not prescribed.

When do not use

For the drug "Urografine" contraindications are associated with an apparent increase in the functioning of the thyroid gland, decompensated by insufficient cardiac function.

Acute pancreatitis will not allow a cholangiopancreatographic examination.

Hysterosalpingography diagnosis is not performed in the child's bearing state and with an acute inflammatory reaction in the pelvic region. 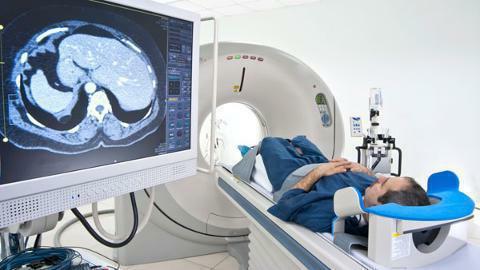 Myelography, ventriculography and cisternography studies are not performed when this drug is contrasted due to its neurotoxic effect.

For the "Urografine" preparation, the instructions for use include information on adverse events during the intravascular infusion. Respiratory adverse reactions are associated with shortness of breath, coughing, swelling of the lung, stopping respiratory activity.

Disturbances in the digestive system are manifested by vomiting, pain symptoms in the stomach.

Changes in cardiac and vascular activity are associated with fluctuations in blood pressure and contractile frequency. Occasionally, the appearance of dangerous thromboembolic complications provoking myocardial infarction.

Undesirable reactions of the urinary system are manifested by impaired hepatic and renal function.

The "Urographin" medication is suggested for use with caution when there is excessive sensitivity to a substance with iodine content. Accurate introduction requires severe damage to the kidney and liver, insufficient work of the heart muscle, emphysema lung disease, poor health of the patient, atherosclerotic vascular disorders, decompensated increase of sugar in the bloodstream, subclinical strengthening of the thyroid and general myeloma. Undesirable effects in these conditions can develop from the infusion of medication into the vein. 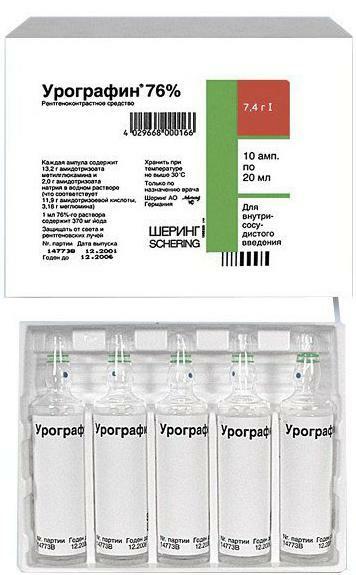 The use of radiocontrast medication can cause hypersensitivity, which is manifested by difficulty breathing, erythema reddening of the skin, rashes, burning or swelling of the facial part of the head. In severe disorders, angioedema, bronchial spasm and anaphylactic shock state develop. Undesirable effects can occur within 60 minutes after drug use.

Most common side effects occur in patients who are allergic to seafood and iodinated components that have had bouts of hay fever, hives, or bronchial asthma. Before prescribing a radiopaque medicine, the physician should examine past human diseases. If there is a high probability of an allergic process, antihistamine therapy is used to prevent it.

Increased sensitivity to the drug is enhanced by the use of beta-blockers. Such drugs cause resistance to the usual treatment of allergies.

Inorganic iodine solution is able to change the functioning of the thyroid gland. These data are taken into account when administering the drug to patients who have a latent form of hyperthyroidism.

In old age there is a pathology of the vascular wall and a neurological unstable condition, which increase unwanted processes from iodine-containing contrast medications.

With intravascular infusion, insufficient kidney work sometimes occurs. To prevent it, you need to study past kidney diseases, to detect the existing deficiency of this organ. Risk increases myeloma, elderly age, progressive vascular disease, paraproteinemia, severe forms of high blood pressure, the deposition of uric acid in the joints.

If there is a risk of developing such a reaction, the hydration procedure is preliminarily performed using the intravascular infusion method. It is also carried out at the end of the diagnosis, in order to withdraw the contrast agent through the kidneys.

Nephrotoxic and cholecystografic oral medicines are not used to reduce the burden on the body during the drug removal period, nor do they perform angioplasty of renal vessels or major surgery.

For violations in the valves of the heart and at elevated pressure in the lungs, the use of the drug leads to a pronounced hemodynamic change. Older people with myocardial diseases in the past are more prone to ischemic and arrhythmic lesions. If there is heart failure, then with intravascular application, the drug can provoke swelling of the lung tissue.

Usually patients normally perceive radiopaque medication. All the undesirable reactions from taking the medication describes the drug "Urographin" instruction. Reviews often indicate a good tolerability of the drug. Patients often characterize the diagnostic procedure itself, rather than taking a contrast agent.

There are reviews about the introduction of the drug into the uterine cavity. This procedure causes unpleasant, uncomfortable sensations.

Not all information on the methods of administration contains the instruction for use on the "Urografine" solution. For CT, reviews indicate the need to take a diluted medication orally for the day before the examination and in the manipulation room. To the taste it resembles the usual colorless water, which does not smell anything. 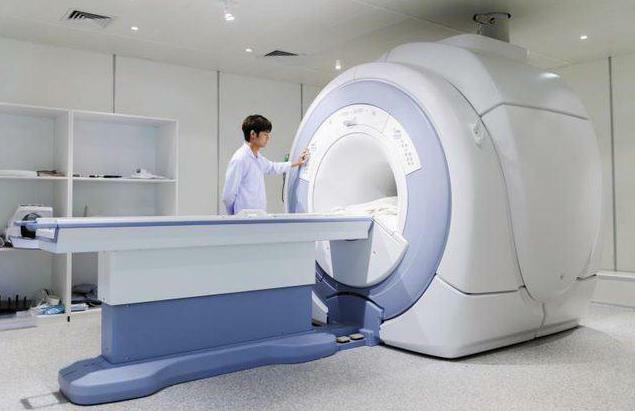 There are negative reviews when the patient was unable to perform urographic diagnosis due to complaints about the discomfort with the administration of the drug. The patient became ill, his blood pressure dropped significantly.

There is an opinion that in the absence of allergic manifestations of iodine particles, the use of the drug should not be feared. This medication with a proven safety profile is used by many specialists for examinations.