Oncological pathology occupies one of the first places in the number of deaths worldwide. Unfortunately, the incidence of cancer does not decrease, but only increases. Scientists are trying to find ways to treat oncological pathologies that would completely cope with the disease. To date, 3 methods of combating cancer are being performed: surgical operations, chemo- and radiotherapy. All of them are aimed at removing the tumor itself and reducing the risk of relapse. To stop the growth of atypical cells, adjuvant and neoadjuvant chemotherapy is performed. These methods are used both as a complex treatment, so yourself( with some oncological pathologies). 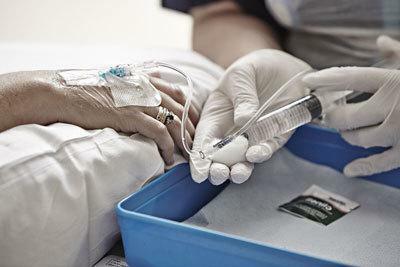 Adjuvant chemotherapy - what does it mean?

Chemotherapy is a medical method of treatment. For its implementation, cytostatic agents are used to kill tumor cells. Patients often ask themselves: adjuvant chemotherapy - what is it? This term means conducting courses of drug treatment after surgery. Proceeding from this, adjuvant chemotherapy is a measure necessary to avoid the further development of cancer. This type of treatment is used for almost all tumors. It is used for lung, breast, stomach, intestine and other cancers. Chemotherapy is performed before and after surgery. For some types of cancer( Hodgkin's disease, red lip rash, skin), it is the only method of treatment. 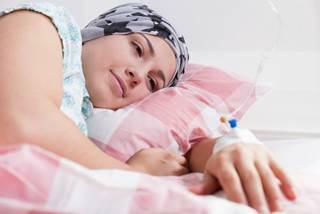 Varieties of drugs for chemotherapy

All chemotherapeutic drugs are cytostatic agents. Their action is aimed at the inevitable death of the tumor cell. This is done in various ways. In most cases, drugs interfere with the synthesis of DNA cells. As a result, it loses the ability to divide. Violation of the synthesis or function of DNA is carried out by inserting into the chain, breaking bonds between nucleotides.

Chemotherapy drugs have a different structure. Some of them are plant-based( medicinal "Vinkristin"), others refer to alkylating agents( solution or tablets "Cyclophosphamide").Also to groups of chemotherapeutic agents include special antibiotics, anthracyclines and platinum preparations. Representatives of these groups are medicines "Rubomitsin", "Adriamycin".Adjuvant chemotherapy is carried out by intravenous drip. Ointment and tablet forms are considered less effective, therefore they are used extremely rarely. In some cases, medications are injected intraperitoneally, that is, into the abdominal cavity. Sometimes intra-arterial access is used for injections. 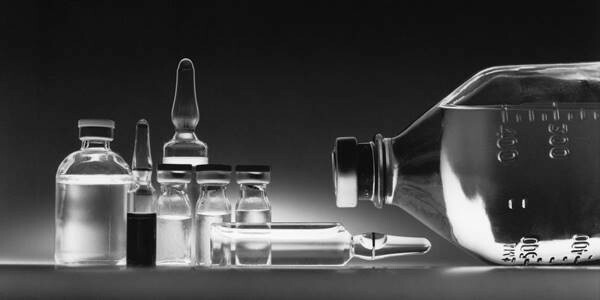 What is chemotherapy for?

Like all other treatments, adjuvant chemotherapy has certain indications. Before starting treatment with cytostatic agents, it is necessary to conduct a full examination of the patient. After that, the doctor evaluates all risks and decides whether to conduct chemotherapy. The following indications for the treatment of cytostatics are distinguished: 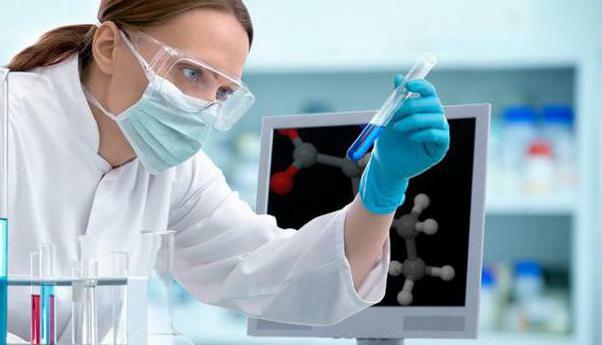 As is known, chemotherapy is not always easily tolerated by patients. In most cases, patients experience a variety of adverse reactions arising from the administration of cytostatic agents. Some patients refuse treatment.

Adjuvant chemotherapy is carried out by courses. Duration of treatment is from 3 to 6 months( sometimes more).The choice of the course is determined by the doctor taking into account the patient's condition. Most often in six months, about 6-7 courses of chemotherapy are carried out. It is believed that the more often the patient receives treatment, the more effective the result. For example, a course of chemotherapy can last 3 days every 2-4 weeks. At the time of treatment, you must carefully monitor the patient's condition. Also, the blood indicator is checked and in the interval between courses.

Despite the effectiveness of treatment with cytostatic agents, they are not always prescribed. Every doctor knows that adjuvant chemotherapy affects not only the tumor process, but also the healthy cells. In particular, it concerns leukocytes. Some drugs have harmful effects on the cardiovascular system and the lungs. Contraindications for the conduct of chemotherapy are severe diseases of the kidneys and liver. This is due to the fact that the risk of developing a deficiency of these organs is too great. Also, chemotherapy should not be given to patients who have a history of calculous cholecystitis( gallstones).Contraindications for the treatment of cytostatic drugs are changes in the general blood test. Specific parameters are set, in which treatment is impossible. These include: the number of platelets less than 100 * 10⁹, a decrease in hematocrit and hemoglobin. Also, chemotherapy should not be performed for patients with severe asthenia syndrome. Acceptable for treatment is a body weight of 40 kg or more. 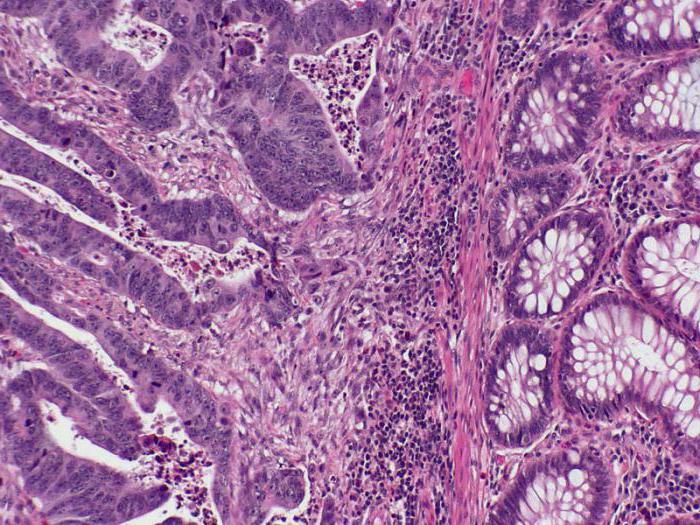 Side effects of chemotherapeutic drugs

The severity of the chemotherapeutic method of treatment lies in its side effects. In addition to external manifestations of adverse effects of drugs, there are changes in the analyzes. The main side effect is oppression of the hematopoietic system. This mainly applies to the leukocyte germ. As a result of the harmful effect on the white blood cells, the body's immune system suffers. This manifests a general weakness, the attachment of various infections. Another side effect is the neurotoxic effect of the drugs. Some patients have a depressive condition, tearfulness, sleep disturbance. Patients also note nausea, vomiting and diarrhea. Side effect of cytotoxic agents affects the appearance of patients. On examination, there is alopecia( hair loss) and pallor of the skin.

Oncological processes in the stomach are observed frequently. Usually they develop on the basis of polyposis or peptic ulcer. The main manifestations of stomach cancer are pain in the epigastric region, aversion to meat, belching. At the initial stages of the oncological process, surgical treatment is necessary. It consists in the resection of the organ and the creation of an anastomosis between the esophagus and the intestine. Adjuvant chemotherapy for stomach cancer is carried out in the absence of contraindications. It allows to prolong the period of remission, and also slows the metastasis of the tumor. Unfortunately, cytotoxic drugs are not effective in all forms of stomach cancer. It has been shown to have a positive effect on adenocarcinoma. It is also carried out as a measure of palliative care. 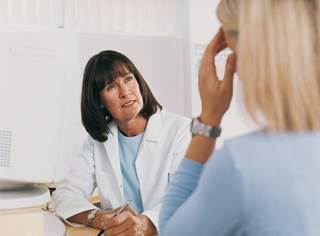 Adjuvant chemotherapy for breast cancer is necessary for any histological forms of the cancer process. It is performed after surgical treatment, regardless of the amount of surgical intervention( mastectomy or sectoral breast resection).This is necessary to avoid metastasizing atypical cells into lymph nodes and distant organs. In rare cases, chemotherapy is not a mandatory method of treating breast cancer. For example, if the tumor size is less than 1 cm and does not extend to the lymph nodes. Also, with caution, it should be used in young patients. In the period of premenopause treatment with cytostatic drugs is performed by all patients, except for those who have contraindications.

Many women are familiar with such a diagnosis as the cyst( cystadenoma) of the ovary. In most cases, education is benign and rarely turns into a cancer process. Nevertheless, there are some varieties of cystadene that are susceptible to malignancy. These include serous and papillary borderline tumors. Symptoms of these formations may be pain in the lower abdomen, a violation of the menstrual cycle. They are detected with ultrasound of the pelvic organs. An accurate diagnosis can be made only with a biopsy of cystadenoma. When border formations need surgical treatment, the volume of which depends on the patient's age. Adjuvant chemotherapy is performed in rare cases when the risk of high tumor metastasis. It is also indicated if the oncology process recurs on another ovary. 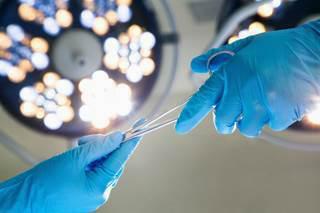 The most common oncological disease is lung cancer. It takes millions of lives around the world. Adjuvant chemotherapy for lung cancer is almost always shown. It is necessary not only after surgical treatment, but also as an independent method for a diffuse small-cell tumor. Various drugs are used. Among them are medicines "Cisplastin", "Vinorelbine", "Gemcitabine" and others. The main indication for the chemotherapy is peripheral and central lung cancer with involvement of the breast lymph nodes. Treatment with cytostatic drugs is not carried out only in case of patient's refusal, the presence of decompensated diseases, old age and at the 4th stage of the oncological process.

The association of chemotherapy with the development of metastases

One of the main goals of the treatment is to remove metastases with adjuvant chemotherapy. It is believed that the effect of cytotoxic drugs significantly reduces the risk of recurrence of the tumor process. Thanks to chemotherapy in the postoperative period, with cancer of the breast, lung, uterus and appendages there is a complete removal of metastases in the regional lymph nodes. Also, the risk of their appearance in remote organs is reduced. On this basis, drug treatment of cancer contributes to the slowing of the oncological process, and in some cases - to complete cure.

Reviews of specialists and patients about adjuvant chemotherapy

According to oncologists, chemotherapy is an aggressive method of affecting the body. It not only suppresses the immunity of the patient, but is also difficult to tolerate by patients. Nevertheless, to date, treatment with cytostatic drugs has more positive aspects than minuses. It is noted that with a combined approach to fighting cancer, the chances of survival are increasing.