One of the analogues of the antiviral drug called "Harvoni" is the modern medicine Ledifos Hetero. This drug was created for those people infected with viral hepatitis C. Before releasing the Ledifos series of tablets, its manufacturers performed a variety of different clinical studies, which made it possible to verify the effectiveness and use of the drug as an alternative to its prototype. This article will describe the use, contraindications, efficacy and feedback about Ledifos. What should a patient know about this drug? Let's understand together. 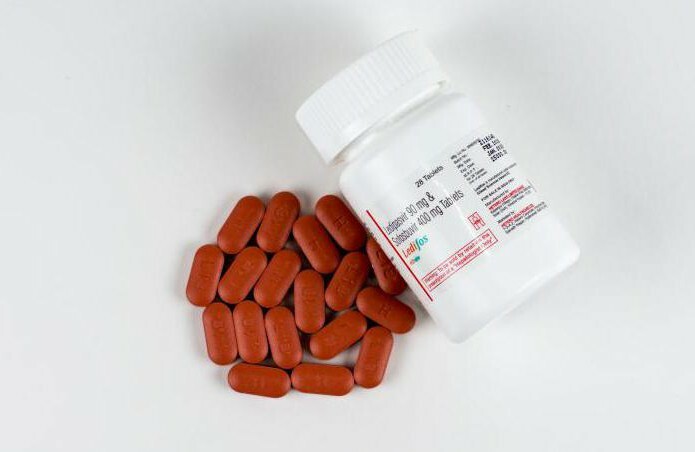 At different stages of the disease with hepatitis C1 or C4 genotype, patients are prescribed a drug called Ledifos( "Ladifos"), consisting of ladipasvira and sophosbuvira. The drug is also used in the treatment of liver cirrhosis. The contained in the composition of the drug, lepidasvir suspends the spread of the disease and does not allow the infection of healthy cells in the body. Ledifos from India should only consult with a doctor. To select analogs, it is also worthwhile to contact an infectious disease specialist.

Description, formulation and composition of

Ledifos is the official generic drug "Harvoni".It is an inhibitor of specific proteases involved in the biochemical process of doubling viral RNA.This effect is due to the components of "Ladyfos".The composition of the drug is in the dosage of 400 mg of cofosbuvir and in the amount of 90 mg of lepidasvir.

The drug is available in the form of tablets. All tablets "Ladyfos" are labeled Nl18.This makes it possible to distinguish a counterfeit from a quality original drug. The drug package contains 28 active tablets, which are covered with a glossy coating. Manufacturer "Ladyfos" - the company Hetero, which is located on the territory of India. Currently, the company is the leader in the production of effective and not too expensive means to combat the diverse genotypes of the hepatitis C virus. preparation. Ladipasvir and sophosbuvir, being the active ingredients of the Ledifos tablets, when ingested, they block enzymes that provoke the development and reproduction of the hepatitis virusC. Clinical trials were conducted, in which more than 1500 people participated.95% of the subjects completely recovered after 8 weeks, receiving a stable response of the immune system.97% of people had positive results 12 weeks after the start of treatment. A sustained virologic response was seen after 12 weeks of therapy in 99% of patients with cirrhosis. With cirrhosis of the liver and without it, the effect was achieved in 95% of people over the same period of time. With the help of the study it was found that the combination of lepidavir and sophosbuvira without the use of ribavirin copes well with the hepatitis C virus of the first genotype. 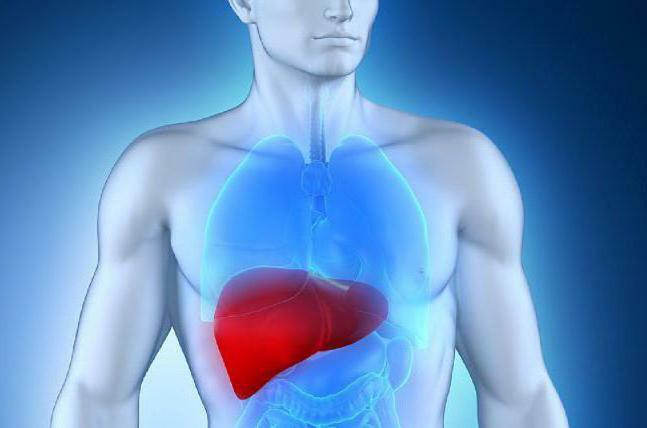 The medicinal preparation Ledifos is a ready-made working combination that allows to effectively fight the causative agents of chronic hepatitis C( C1 and C4 genotype).The correct combination of active substances in the preparation helps to avoid the use of ribavirin and alpha-peginterferon.

"Ladyfos" is indicated for the treatment of chronic viral hepatitis C in patients with and without cirrhosis. Ledifos is used according to the instructions. The drug is suitable for patients who for the first time undergo therapy, as well as for patients who have been treated with hepatitis C with ribavirin and interferon has not produced the expected effect. The drug is also indicated in cases of intolerance of these agents.

When should I not use "Ladyfos"?Contraindications are listed below: 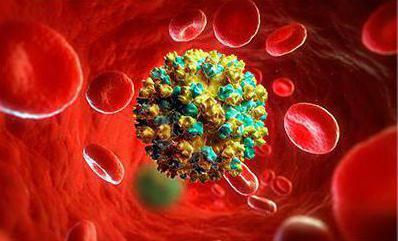 When using "Ladyfos" women should not forget about reliable contraceptive methods. The drug adversely affects the development of the fetus and is not recommended when planning pregnancy. The effect of this remedy on pregnant women is not fully understood. It is necessary to give up breastfeeding for the period of therapy, as the drug enters the milk. It is recommended to transfer the baby to an artificial mixture before the completion of the course of treatment.

The effect of the drug on the child's body has not been studied, therefore it is not assigned to children.

If a serious side effect or an allergic reaction occurs against the background of the drug, the course of treatment should be immediately interrupted. It is necessary to inform the doctor about the use of other medications - "Ladifos" is compatible not with all medications.

The generic Ledifos is tolerated well enough and rarely causes unwanted reactions. In some cases, against the background of using the drug, there are such side effects as:

You need to listen carefully to your feelings during the first intake of the medication. If severe dyspnoea, swelling of the tongue, lips, face, and severe itching, stop taking the medication and seek medical attention immediately.

Patient immediately after the first administration of the drug feels mild ailment, lethargy and headache. After adaptation to the drug, these symptoms will disappear. It is important to bring the treatment to an end.

The number of side effects increases with the use of the drug together with the drug "Ribavirin".

"Lediphos" is approved for use in patients with cirrhosis of the liver, but therapy must be carried out with extreme caution. Usually the drug is well tolerated and significantly increases the chances of a full recovery. 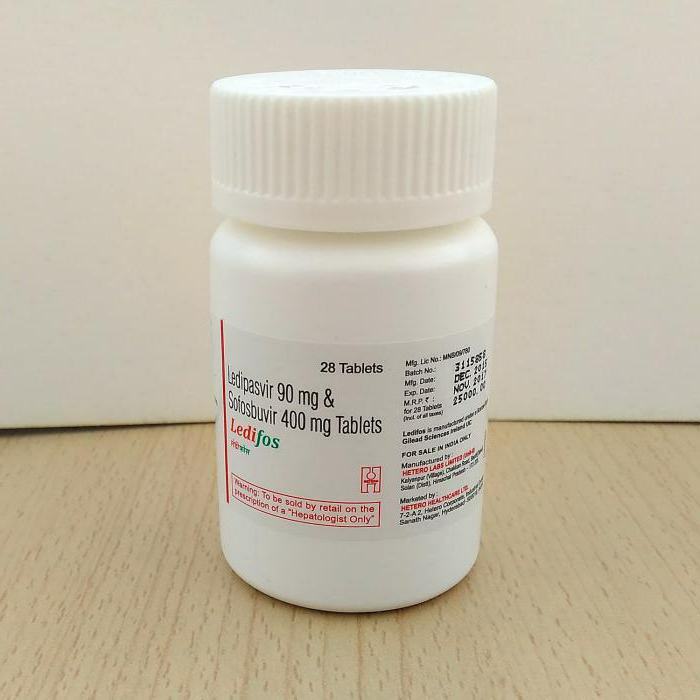 "Ladifos" is applied strictly according to the scheme recommended by the doctor. The drug should be taken once a day on a tablet, washed down with water. It is not recommended to drink medicine with tea, fruit juice or coffee. You should take the pill at a certain time, so that the active ingredients of the drug are evenly distributed throughout the body.

The course of treatment with the drug is 12 weeks with no evidence of liver fibrosis or fatty hepatitis. The course of therapy is extended to 24 weeks with a compensated form of cirrhosis of the liver. A similar scheme is used for simultaneous infection with viral hepatitis C and HIV infection.

Accurate recommendations for dosage, multiplicity of tablets and duration of therapy can be obtained from your doctor.

Ledifos drug has a small list of analogues having a similar mechanism of action with this drug. The following drugs are allocated:

The most popular of these is "Hepzinat LP", because it is a structural generic of the original Harvoni remedy. 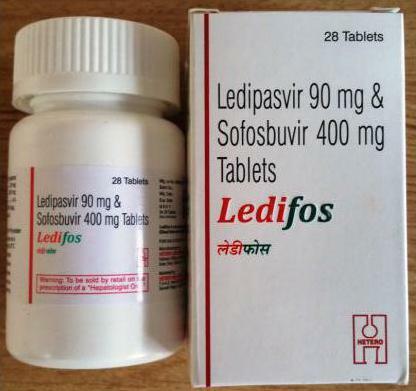 How much is it?

Price Ledifos from India - from $ 430 to $ 550 for a package that contains 28 tablets. The original Harvoni tool costs $ 22,500 for one package. Such a weighty difference in the price of Ledifos and Harvoni explains the increase in demand for analogues of antiviral drugs for the treatment of hepatitis C.

In Russia, there are a large number of official intermediaries that sell this product through pharmacies and online stores, so the drug "Ladifos" is not too difficult to acquire.

Reviews of Ledifos from doctors and patients

The Indian "Ladyfos" has acquired a reputation as a highly effective antiviral drug from the very beginning of its release. If you believe the reviews about Ledifos, this drug makes it possible to completely get rid of hepatitis C. Some patients were initially treated with drugs "Ribavirin" and "Interferon", but the therapy was unsuccessful. And only treatment with Ledifos, according to reviews, helped them completely get rid of the disease.