Blepharoplasty in Moscow: features of the procedure and reviews

Gone are the days when plastic surgeons were available only to wealthy people. And in recent years, the popularity is gaining blepharoplasty. In Moscow, there are many clinics offering this service, but not all of them perform it equally qualitatively. This operation is a serious surgical intervention, therefore it is necessary to do it only in a certified institution. What is a blepharoplasty? What do people say about her? Where is the best way to conduct an operation in Moscow? We will try to answer these questions in our article.

Age changes, perhaps most strongly reflected on the face. The skin around the eyelids is thin and sensitive, so wrinkles appear here earlier and look much more noticeable. Trying to keep youth, many women turn to blepharoplasty. During this procedure, the surgeon removes excess fat and skin around the eyes. If desired, you can also adjust the incision and remove the hernia under the lower eyelids. After the operation, the eyes increase visually and the face looks much younger. 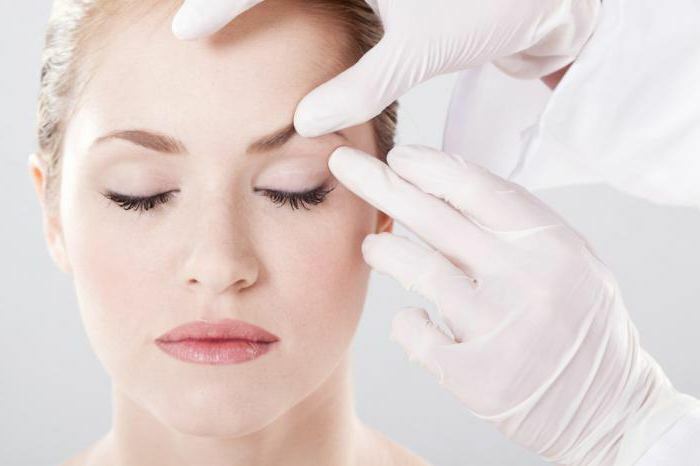 In Europe, the procedure is extremely popular in women 40-50 years old, and in Asia - for young girls who want to increase the incision of the eyes. Blepharoplasty in Moscow is considered a costly operation. Often, it is combined with other cosmetic services, such as a facelift, contour plastics or peelings. As a rule, its cost varies greatly depending on the clinic. The amount usually includes a primary reception from a surgeon, materials and medications, the operation itself. And the subsequent restoration may require additional funds. However, you should not save on the procedure. The consequences of a substandard operation can greatly affect not only your health, but also your appearance.

Typically, surgery affects only the problematic part of the eye. Depending on the indications, the following types of this procedure are distinguished: 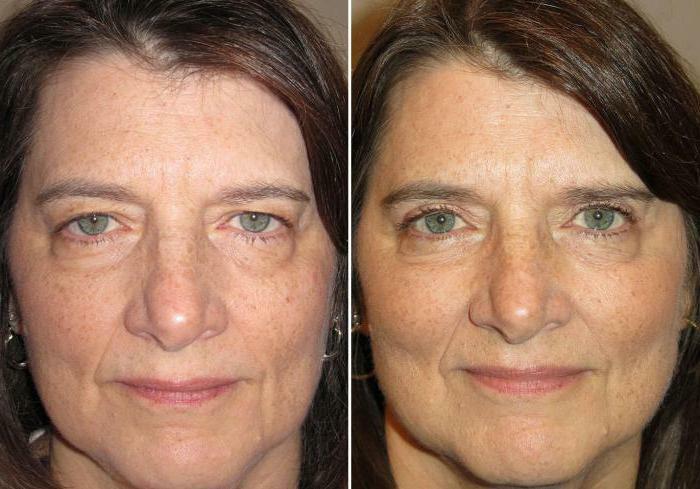 In addition, there are different methods of performing the operation. A classic procedure is considered obsolete, when the excess skin is removed manually with a small scalpel. The most cost-effective way is to tighten the eyelids with a laser. It allows painless to make a miniature incision, which then heals faster. The risk of infection is also significantly reduced. You can make blepharoplasty in Moscow by any of these methods, but the cost of the procedures will vary significantly.

Contraindications and possible complications of

Blepharoplasty is a simple procedure, but it can not be carried out by all people. Like any other operation, it has many contraindications. We list the most serious among them: 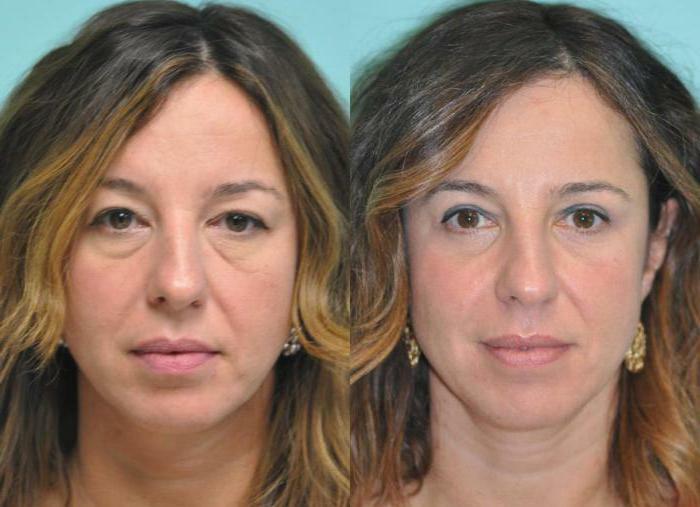 As a rule, blepharoplasty in Moscow begins with examination by the treating surgeon, who collects an anamnesis by interviewing the patient. Hiding contraindications can turn into irreversible complications for the client, which will not be corrected. However, even with a successful operation, there is a risk of their occurrence. Most often, patients face the following difficulties:

How is the operation performed?

A fairly common procedure is blepharoplasty. In Moscow, the best surgeons offer their services to everyone who wants to change their appearance. However, potential patients are often frightened by the operation. And absolutely in vain. Collecting a detailed medical history and taking the necessary tests is the preparatory stage. The doctor interrogates the patient to find out about the transferred diseases, which can cause complications. It is also necessary to pass blood and urine tests, visit an anesthesiologist and make a fluorography. One month before the operation, you need to stop taking alcohol, "Aspirin" and "Analgin," and also not to smoke. The surgeon excludes possible eye diseases, determines visual acuity and tonus of the eyelids. 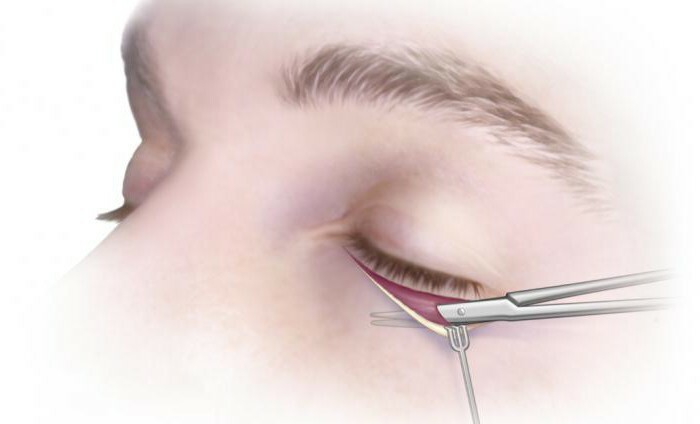 The operation is conducted according to a well-thought-out scenario. A patient lying with his eyes open, markers mark the marking of the eyelids. Then make a cut, the length of which does not exceed usually 3-9 mm. Through it, the excess skin and fat layer are removed. The muscles can also be removed. After the end of work, an intradermal suture is applied to the incision. How long does blepharoplasty last in Moscow? The patients' comments point out that in the Moscow clinics the procedure rarely takes more than 2 hours. As a rule, it is carried out on an outpatient basis, but some institutions offer a permanent hospital for their clients during the operation and rehabilitation.

The recovery period after blepharoplasty takes about 20 days. Immediately after the operation, the patient's eyes appear strong swelling and bruising, which will gradually subside within a week. The stitches will be sealed with a special adhesive tape, which can not be taken off for 5-7 days. During the healing period, the cut must not be touched with dirty hands, it should be applied to cosmetics, rubbed, stretched and combed. A few days after the procedure, the attending physician removes the seams and prescribes medicines to the client, which contribute to the rapid healing of wounds. 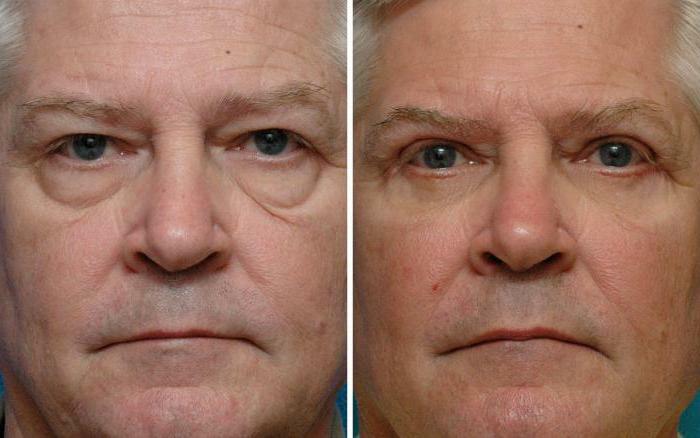 After 2 weeks the consequences of the operation will become almost invisible. However, during the month, doctors recommend avoiding heavy physical exertion. The skin around the eyelids should be protected for about half a year with creams from direct sunlight.

Where to make blepharoplasty in Moscow?

There are many clinics in the capital offering to conduct this procedure. As a rule, the more prestigious the institution, the more expensive it provides its services. But you do not need to save on the operation, because your future appearance depends on it. According to the residents of the capital, the best plexophore plastics in Moscow are held in the following medical centers: 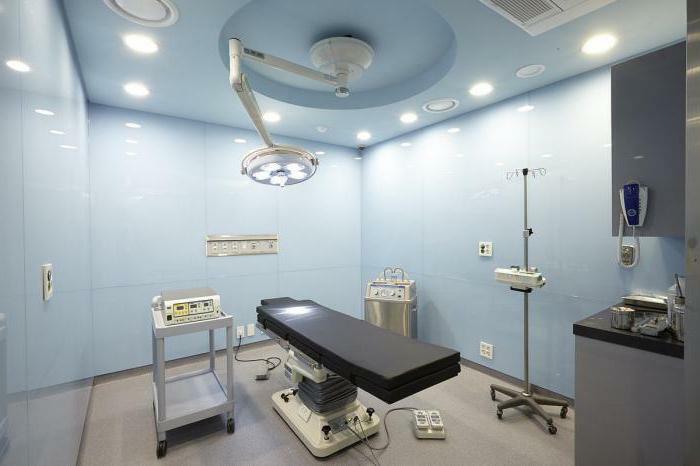 And now consider in more detail the data of the institution, their treating doctors and the services they offer.

This clinic is considered to be one of the leading institutions that conduct such a procedure as plexophoroplasty( Moscow).It is headed by Eduard Vadimovich Shihirman-candidate of medical sciences, a member of many European societies of aesthetic surgery. In the domestic market, he has been working for more than 20 years, having conducted more than 6,000 operations during this time. Shihirman is considered a pioneer in plastic surgery in Russia. The doctor takes even the most difficult cases. His clinic does not only bilobaroplasty, but also rhinoplasty, liposuction and polypotting procedures. The last professional development of the leading surgeon of the clinic was conducted in 2015 in Holland. 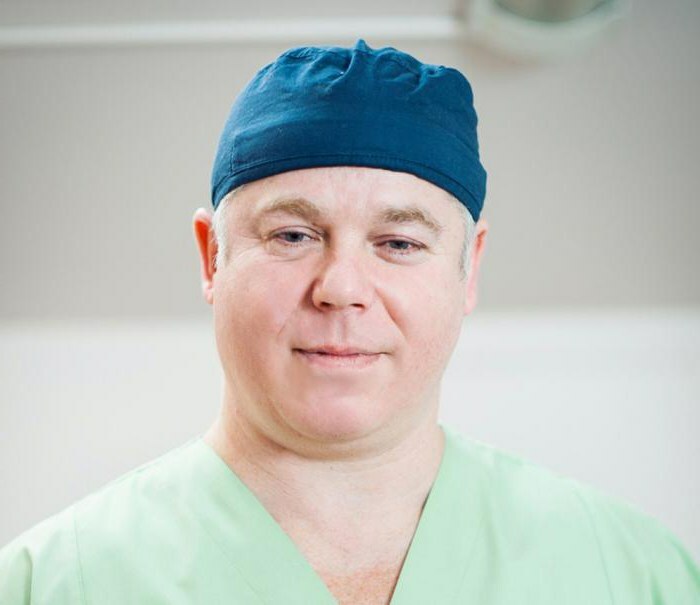 Doctor Shihirmansa independently carries out operations of poblopharoplasty in his hospital. Depending on the type of procedure, its cost can vary from 85 000 to 170 000 rubles. The price includes all receptions at the surgeon, consultation of an anesthesiologist, as well as a day of stay in the hospital clinic.

High-quality plexophoroplasty of the upper eyelids in Moscow is held at the Beauty Trend Clinic, where the famous physician Vladimir Alexandrovich Zlenko accepts patients. He was trained at the London School of Plastic Surgery, where he successfully defended his Ph. D.Masterfully conducts polyposuction, eyelid surgery and abdominoplasty. Experience of the doctor is more than 6 years. He regularly participates in international medical conferences dedicated to aesthetic surgery. When carrying out procedures, he seeks to use modern technologies, which other experts are unfamiliar with. 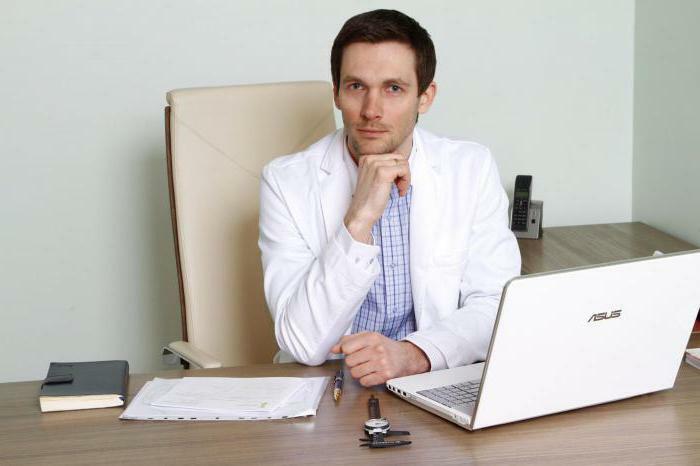 Beauty Trend Clinic is located in the center of Moscow on Lesnoy Street. The procedure takes about 1 hour, after which the patient, recovering from anesthesia, can go home. The cost of the operation is 45,000 rubles( the upper or lower eyelid) or 90,000 rubles( circular plastic) .

If you want blepharoplasty lower eyelids in Moscow to be performed by an experienced specialist, then pay attention to the Ross Medical Group .Here the leading plastic surgeon Vladimir Viktorovich Naumov operates. The doctor has been carrying out cosmetic procedures for over 20 years, and his experience includes more than 6,000 successful operations. Naumov uses only proven and reliable methods, leading to a qualitative and long-term result. Initially, he specialized in maxillofacial surgery. Starting from 2014, the doctor annually wins the "Best Plastic Surgeon" award in the " Mediaparm " rating. 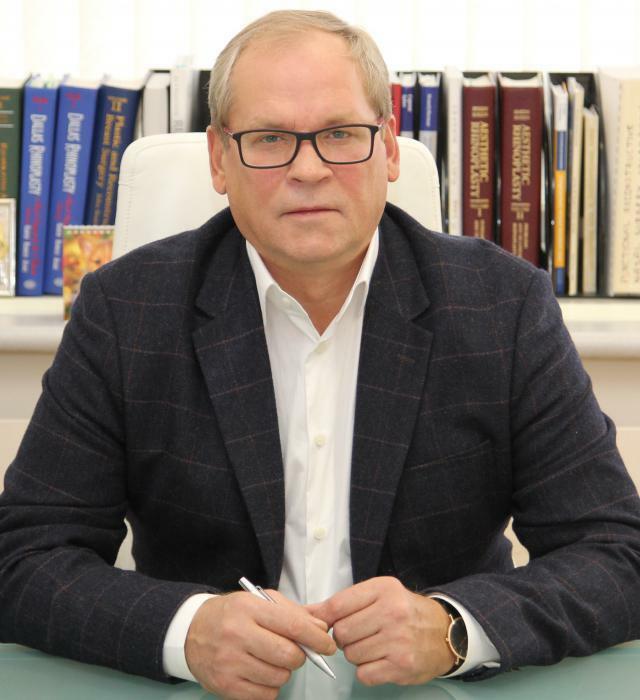 The cost of surgery for this doctor is calculated individually for each case. As a rule, prices for blepharoplasty start at the clinic with 55 000 rubles. The procedure includes the services of an anesthesiologist, consultations of the treating surgeon and the patient's stay in the hospital after the operation.

Many clinics suggest carrying out such procedure as blepharoplasty( Moscow).Surgeons often begin to engage in plastic surgery, retraining from other areas. However, Ekaterina Sergeevna Kudinova, who works in the clinic "Medlange", received her primary education in this specialty. She is a talented pupil of the famous surgeon Igor Aleksandrovich Wulff, known not only in Russia, but also abroad. She carries out author's seamless operations on blepharoplasty, which do not leave scars on her eyelids. 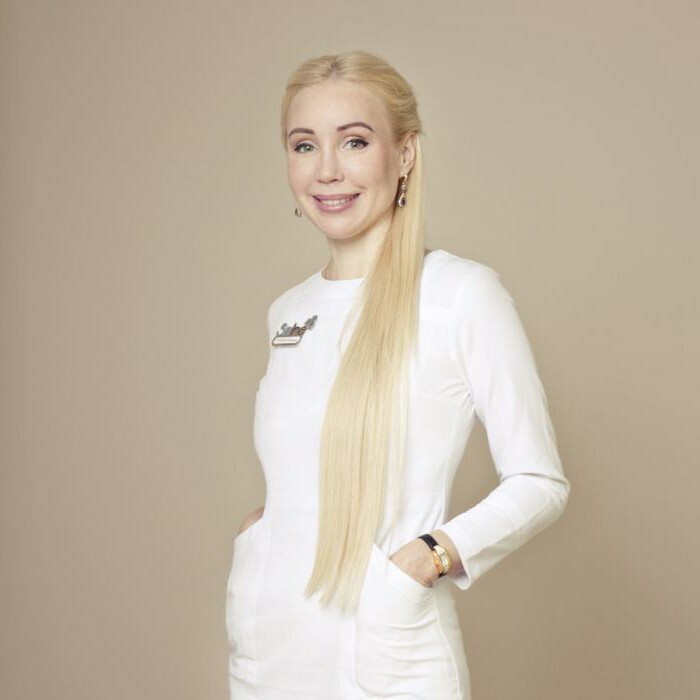 The operation is conducted by Dr. Kudinova under local or general anesthesia. It lasts, as a rule, from 40 minutes and up to 2 hours, depending on the complexity. The patient does not need to be hospitalized, so within a few hours he can leave the clinic. Also, if you want, you can spend a day in the hospital. The cost of the operation varies from 90 000 to 150 000 rubles. Prices include anesthesia, examinations and dressings.

Positive Feedback on the procedure

Operation is a complex procedure with the risk of complications. Therefore, many people do not dare to hold it. However, those who still made themselves a suspender of the eyelids, were delighted with the effect. In their opinion, the main thing is a good clinic for blepharoplasty. In Moscow, they are many, so patients can easily choose a reliable institution.

Negative responses about the procedure

It is worth noting that negative feedback about the procedure is much less common. Much more expensive than in other regions of Russia, is blepharoplasty in Moscow. The best surgeons with a lot of experience require a price for their services, which not all people can afford. Of the deficiencies of the operation, scars are also characterized by soreness in the first days of rehabilitation. Some patients develop severe swelling, because of which they begin to see badly. The patches, by which the seams are sealed, get unstuck. During the week, it is necessary to significantly reduce water procedures, which also caused people's displeasure.

Blepharoplasty is a popular plastic surgery offering a noticeable rejuvenating effect. When choosing a quality clinic with experienced surgeons, there is no doubt that it will pass without complications.