Pain syndrome is the main manifestation of the clinical picture of pathology of the musculoskeletal system, in particular, the spine. The occurrence of acute vertebral pain should be stopped immediately, even given that fighting morbidity is not etiotropic therapy. Blockade of the spine is one of the activities that takes place in the complex treatment of vertebrology problems.

It is harder for specialists to stop chronic pain syndrome than acute back pain, since manifestations begin to have a central character. That is, the focus of morbidity is formed not at the level of excitation of local receptors, but in the brain. Treatment of this condition is longer and requires the use of antidepressants and antipsychotics.

To prevent this, symptomatic therapy already at the early stages of the disease uses such a manipulation as a blockade of the spine. What this is and how the procedure is carried out, we will consider further. 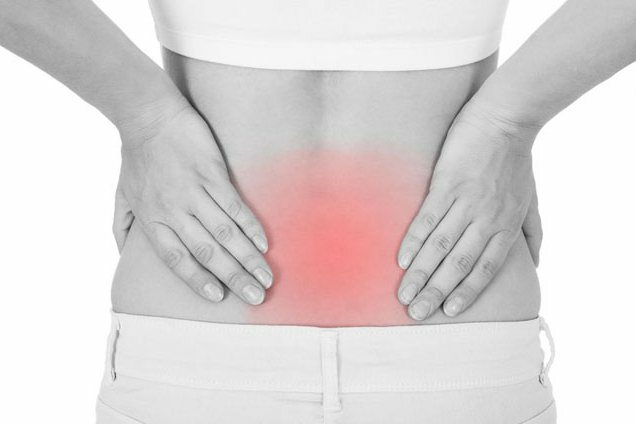 Blockade refers to the exclusion of any link from the mechanism of fighting pain, using medicinal analgesics. In addition to the therapeutic goal, the blockade of the spine is used to carry out the diagnosis. The pain of unspecified localization requires the introduction of anesthetics, which allows the elimination method to determine the pathology development department. As a rule, the pain syndrome "turns off" instantly after the manipulation.

Diseases of the musculoskeletal system requiring the use of blockade must necessarily be accompanied by painful manifestations. In the opposite case, the use of medicines for this purpose is not relevant. The procedure is performed in the following pathologies:

The procedure is carried out in cases where there is no effect of conservative treatment. Efficacy occurs after the first injection, however, severe forms of diseases require 2-3 to 15 manipulations, conducted at intervals of several days.

Advantages of the blockade are quick performance, minimum side effects, observing the rules of carrying out, the possibility of repeated use. In addition to anesthesia, manipulation has an anti-inflammatory and antispasmodic effect, which depends on the selected drugs.

Depending on the number of drugs introduced simultaneously, manipulations are distinguished:

Anesthetic injections are introduced into the following anatomical departments: 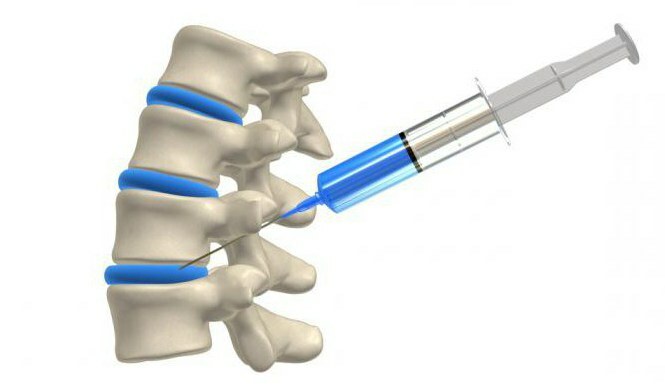 Blockages in the hernia of the spine are divided into two types:

Blockade of the spine has certain contraindications, which the doctor takes into account when examining the patient. Each case is treated individually, clarifying the possible risk of side effects. The procedure is not performed with the following pathological conditions:

Substances that provide an analgesic effect are used for all types of blockades, using the drug alone or in combination with other groups of medications.

Novocain blockade of the spine is performed more often than other injections of anesthetics. Novokain is available in the form of a solution for injections with different concentrations of active substance( from 0.25% to 2%).The analgesic effect develops a few minutes after the blockade has been carried out. The injection with the application of "Novocaine" anesthetizes up to 2 hours. 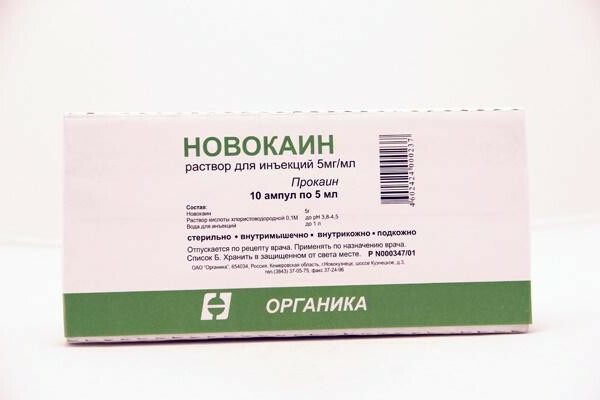 "Markain" is also used for the purpose of arresting the pain syndrome. The result of the introduction of the drug has a late start. The pain disappears after 20 minutes, but the duration of the action can reach 5-6 hours. The use of "Marcaina" is carried out only after a thorough examination of the patient's heart and blood vessels.

The next local anesthetic used to combat vertebral pain is Lidocaine. The price of the drug is in a low category( about 30 rubles per package), which makes it affordable for use. The drug is characterized by a rapid action and a longer time than Novokain.

"Novocaine" and "Lidocaine", the price of which is more than available, are used more often than other local anesthetics. Before using any of them, it is necessary to check the individual sensitivity of the patient to prevent the development of an allergic reaction.

Preparations of hormonal composition in therapy of pathologies of the spinal column in the form of independent administration are used extremely rarely. Most often they are used to treat joints. Blockade of the spine requires a combination of corticosteroids with other drugs( for example, anesthetics).Hormonal drugs reduce pain, stop inflammation, reduce puffiness and allergic manifestations.

The agents used in vertebrology: 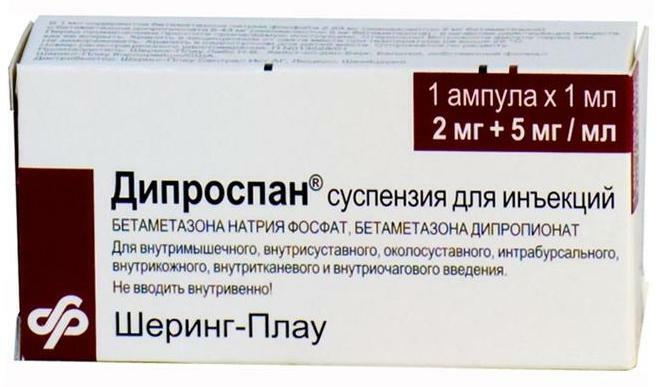 Other groups of medicines

The rest of the drugs do not have an analgesic effect. They are used in the composition of polycomponent blockades and include the following drugs:

Example of the procedure

Consider the example of manipulation. Novocain blockade of the lumbar spine is performed in the supine position. Palpating the injection site, it is treated with an antiseptic solution. Using a thin needle, the drug is injected intradermally until a "lemon peel" is formed.

The needle is then replaced by a longer one and inserted between the necessary vertebrae a few centimeters lateral to the spinous processes. As the needle is inserted, a small amount of solution is dispensed portionwise. Introduced to the limit in the process. Then, the needle is partially removed back and directed under the scion no more than 2 cm. By 5 ml of the solution is introduced at the level of each segment of the spinal column. 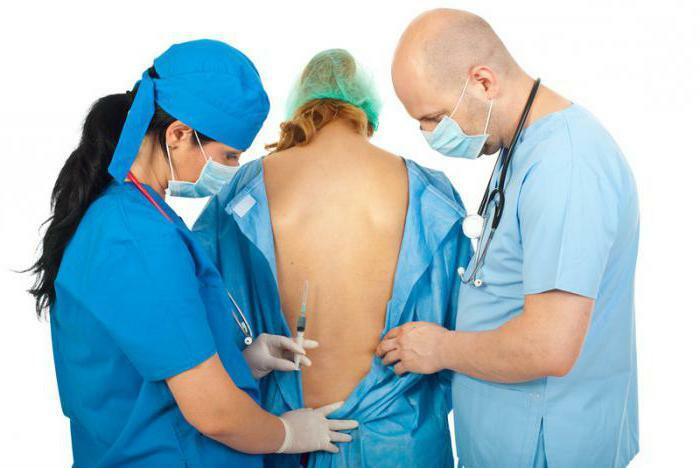 Blockade of three main points is conducted: between the 4th and 5th lumbar vertebrae, between the 5th lumbar and the 1st sacral, in the area of ​​the 1st sacral orifice. In severe pain syndrome, bilateral manipulation is performed using six points. The procedure takes about 40 minutes. For several hours after anesthesia, the patient is under the supervision of specialists.

Epidural block of the spine - what is it?

Epiduritis and lumbosacral radiculitis are indications for epidural administration of analgesic medications. When carrying out anesthesia of the lumbosacral spine, the patient is located on his side, bringing his legs bent at the knees to his stomach. The rear passage is insulated with sterile towels or sheets. The field is disinfected in the place of future administration of the drugs. 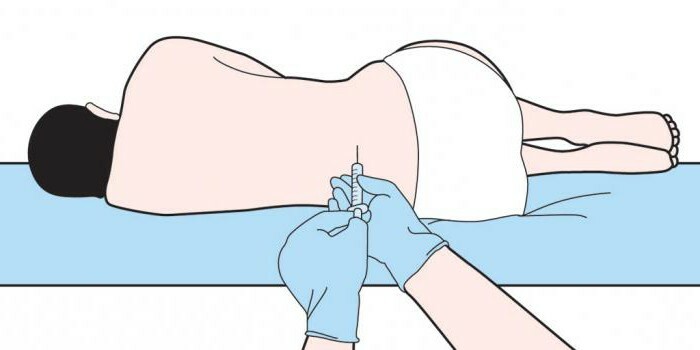 In the projection of the lower sacral orifice, the drug is intradermally administered. Then change the needle and inject it in parallel, piercing the membrane of the entrance to the sacral canal. Further, the needle descends almost horizontally to a depth of not more than 5 cm, by monitoring the liquid, by pulling the piston toward itself. In the absence of content, a drug is administered. The patient can feel pressure and raspiranie in the coccyx.

The maximum volume of drugs administered per manipulation is 60 ml. Epidural blockade allows the use of:

All types of anesthesia should be performed exclusively by a qualified specialist under sterile conditions. The blockade itself, the injection, the treatment of the field and all other parts of the procedure require strict asepsis. A disregard for the procedure may affect the patient's health and lead to the development of the following complications after the blockade of the spine: 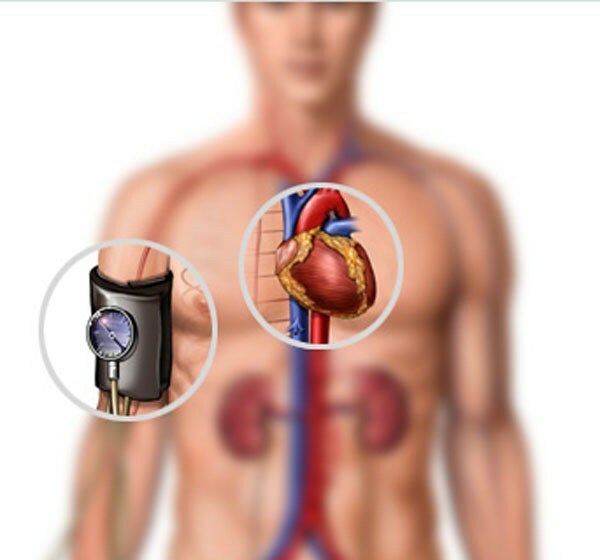 Blockade of the spine, the reviews of which confirm the positive result of the procedure, is almost the only way out in the absence of the effectiveness of conservative therapy. Obligatory conditions for a favorable outcome are a careful examination of the patient and strict adherence to aseptic and antiseptic rules during manipulation.