Ointment for the eyes from inflammation and redness. Tetracycline, erythromycin ointment, "Vitapos", "Tobrex"

Eyes are the main source of human observation of the outside world. If these organs suffer - the quality of life changes radically. The most dangerous phenomenon is loss of vision. It arises for various reasons. Often blindness becomes a complication of other diseases, so it is so important in the presence of troubling symptoms to seek help from doctors.

Today's article will tell you about the kind of ointment for the eyes from inflammation and redness. But it is worth remembering that self-medication is unacceptable in any situation. Before using any drug, you should contact your doctor. It is especially dangerous to conduct experiments on your own vision. It is also unacceptable to treat eye diseases in children independently. 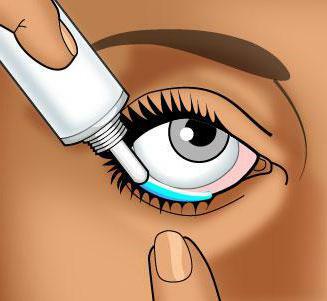 Causes of inflammation and redness of the eyes

Which eye ointment for inflammation and redness should be chosen depends on the nature of the disease. Redness and a vascular reticulum on proteins appear with different infections and during allergies. Inflammation can be caused by viruses, fungi, bacteria, negative environmental effects. It is almost impossible to establish the nature of the origin of the infection independently. Only an experienced doctor can correctly diagnose and prescribe appropriate treatment.

The cause of the inflammatory process in the eye area can also be pathogenic microorganisms that live on the scalp and eyelids. To avoid such infection, it is necessary to have personal hygiene products( towels, sleep glasses), as well as not to use someone else's cosmetics( mascara, brushes for applying shadows).Allergic eye damage is often accompanied by a runny nose, swelling of the nasal mucosa. Bacterial pathologies occur often due to eye contact with dirty hands. Children are the most vulnerable to them. Viral diseases can be transmitted even through the air.

Use of ointments, types of drugs

How to choose the ointment for the eyes? From inflammation and redness in the pharmacy you can get a lot of different drugs. But do not do this yourself. After all, you can not be sure of the cause of the disease. The drug is prescribed according to it. The ointment can have antibacterial, antimicrobial, antiseptic, antiviral, antihistamine action. Also widely used are moisturizing compounds, analgesics, vitamin complexes and so on. Some drugs are preferable to use in the form of drops, and not ointments.

Please note that no matter what eye ointment you get( from inflammation and redness), it should be applied only with clean hands to the eyes without decorative cosmetics. Strictly follow the instructions for use and recommendations of the doctor. Only in this case the result will not wait, and side effects will be minimized or eliminated altogether.

Consider the most popular drugs for the treatment of eye diseases.

This drug refers to antibacterial agents with a wide spectrum of action. Ointment is effective against gram-negative and gram-positive microorganisms. However, the medicine does not cope with fungi and viruses. The active substance of the antibiotic is the tetracycline compound of the same name. Also there is petrolatum and lanolin. The medicine is produced in small amounts: 3 and 5 grams. 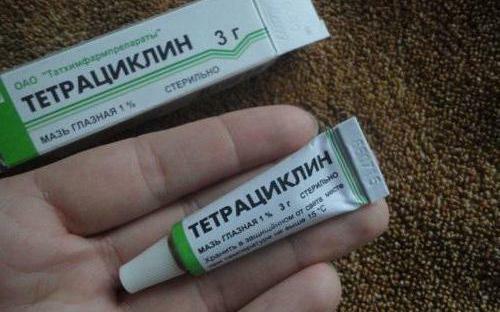 The drug is applied to bacterial and chlamydial infections of the eyes( trachoma, blepharitis, keratitis, meibomite and conjunctivitis).Do not use the product only with individual intolerance to the components - it reports a preparation such as tetracycline ointment( eye), instructions for use. The price of the medication is quite democratic: 50 and 70 rubles for a small and large package, respectively. Duration of use can reach several months.

This medication is an antibiotic, like its predecessor. The drugs differ in the spectrum of action. Erythromycin ointment, whose price is no more than 50 rubles per 10 grams, is effective against many microorganisms that produce penicillinase. However, the medicine only acts on certain gram-negative bacteria. Medication refers to macrolides. The active substance here is erythromycin. The use of the drug is necessary for chlamydia, trachoma, bacterial conjunctivitis and barley. It is important that the antibiotic can be used in children from the first day of life. Contraindicated to apply ointment with eye hypersensitivity and severe liver disease.

The medication is invested for the lower eyelid up to five times a day. More often a medicine is applied thrice a day. Unlike tetracycline ointment, this drug can be used for no more than 14 consecutive days. 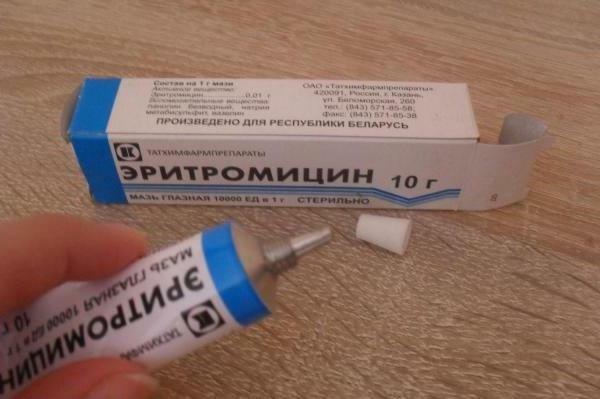 Another drug that has antibacterial effect is Tobrex. Ophthalmic ointment is available in a tube for 3.5 grams and costs an average of 200 rubles. The medication is effective against all bacteria that cause inflammation of the anterior part of the eye. Referring to aminoglycosides, "Tobrex" in small doses has a bacteriostatic effect, and in large - bactericidal.

The medication is applied inside the lower eyelid up to 6 times a day. The use of the drug lasts not more than one week. It is forbidden to use antibiotic for hypersensitivity in children.

Another antibacterial ointment for the eyes, which also has antihistamine action, is "Dexa-Gentamicin".The drug contains gentamicin( broad-spectrum antibiotic) and dexamethasone( glucocorticosteroid).The drug is prescribed for bacterial lesions of the anterior part of the eye and during allergic infectious processes. With an intact cornea, the active ingredients do not penetrate the body. The list of contraindications for this medication is wider than that of its predecessors: viral and fungal diseases of the cornea, epithelial damage, intraocular pressure, lens wear, the likelihood of allergy to components.

The medicine is applied to the conjunctival sac 2-3 times a day for no longer than three weeks. When using additional ophthalmic agents, you need to take a break between 15-30 minutes between application of the formulations. 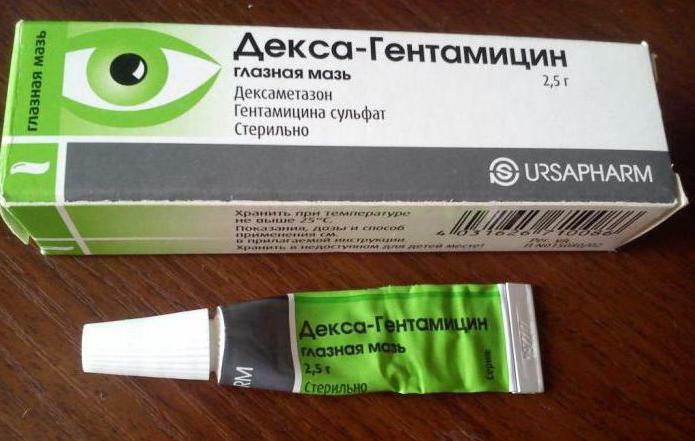 The drug has anti-inflammatory, antihistamine and glucocorticoid action. The medication is effective for allergic conjunctivitis and blepharitis, infectious consequences of surgical intervention and trauma, acute and chronic iritis. It is forbidden to use hydrocortisone ointment for viral eye diseases, corneal damage, tuberculosis or trachoma, and during vaccination.

The drug is usually used for 2 weeks. In rare cases, the doctor can extend this period to a month. The medication is applied with a thin strip in the conjunctival sac up to three times a day. The cost of the ointment is not more than 100 rubles per package.

Vitapos is an ointment for the eyes, which is used to protect the cornea. The composition of this remedy includes retinol, paraffin, petrolatum and lanolin. These components are mixed with a natural human tear and create an imperceptible film. The drug protects the eyes from drying out and irritation. It is used with the negative influence of external factors( dry air, cold, work at the computer, dusty production, visual load) "Vitapos".Ointment for the eyes is not applied to the visual organ only with increased sensitivity and during the wearing of lenses.

The drug is inserted in a thin strip in the lower eyelid. Multiplicity of application - up to three times a day. It is known that medication can slightly reduce visual acuity. Therefore, do not use it while driving or doing important work. Preferably apply the product before going to bed.

If the disease is caused not by bacteria or allergens, but by viruses, then the known oxolin ointment will come to the rescue. For the eyes, it is used in the volume of a small strip, which is laid behind the lower eyelid. Multiplicity of application can reach three times a day. But more often the drug is used before bedtime due to its oily consistency.

Effective against many viral pathologies: conjunctivitis, keratitis, herpetic eye damage. There are practically no contraindications to the drug. Do not use ointment only with hypersensitivity.

This agent helps to reduce irritation in the eyes and eyelids. It eliminates rashes and allergic reactions. Ointment "Demazol" accelerates regeneration processes, protects and moisturizes the mucous membrane of the eyes. The drug can be used in the face area.

There is such a universal tool on average 300 rubles for 10 grams. Note that the drug is more for care than for treatment. Its use is unacceptable only when hypersensitivity to components. The cream is used twice a day for 45 days. Before use, consult a doctor.

There are two most popular ointments for eye treatment that have an antiviral effect - Acyclovir and Zovirax. They are absolute analogs. Active ingredient in them is acyclovir in the amount of 3 grams for every 100 grams of ointment. Such medications are used for viral lesions of the eyes: keratitis, conjunctivitis, herpes. Contraindicated use of ointments only with hypersensitivity. It is permissible for the doctor to apply the drug even during pregnancy. 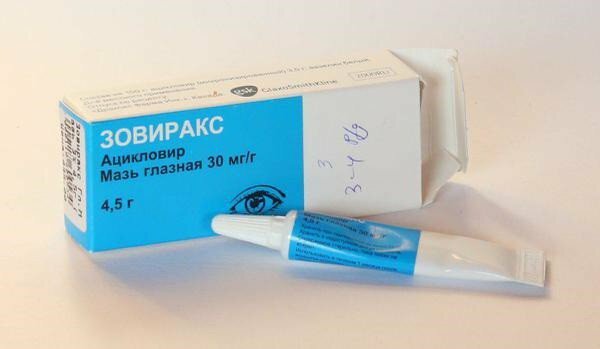 The medicine with a thin strip of not more than one centimeter is laid in the lower eyelid 5 times a day. After recovery, it is important to continue using the drug for another three days. This will prevent the relapse of the disease, which often occurs with the early cancellation of the drug.

From the article you learned about the main medicines used in ophthalmology. Some drugs can eliminate bacteria, others are used to achieve antiviral effect. Please note that not all formulations can be used in pediatrics. So, for example, tetracycline ointment( for eyes) for children is prescribed with extreme caution. Despite its popularity, this tool has not yet participated in clinical trials on children. Often, this medication is replaced with erythromycin ointment. But such a medicine, in turn, can not be removed by all pathogenic microorganisms. 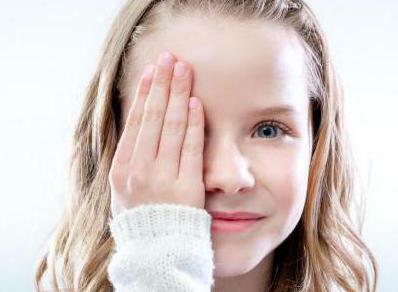 Reviews about the described compounds are very different. With proper use and proper administration, medicines are not only effective, they are well tolerated by patients and almost never cause adverse reactions. It is known that many consumers try to get rid of the problem on their own without referring to a doctor. In doing so, they often acquire antimicrobial drugs when the disease is caused by a virus. Such treatment not only does not have a positive effect, it significantly worsens the patient's well-being, causing complications.

If you have visual problems, inflamed and blushed your eyes, then visit an ophthalmologist as soon as possible. A speedy recovery and excellent vision!