Siamese twins Masha and Dasha Krivoshlyapovs: they were separated by death

Today the society treats people with disabilities with benevolence. Disabled people and just those who are "not like everyone else", sympathize, offer various benefits and special conditions, try to help. But quite a different matter was still half a century ago. Siamese twins Masha and Dasha Krivoshlyapovs are one of the most famous in our country. In many interviews, the sisters told that their life was not easy, and not only because of unusual physiology. 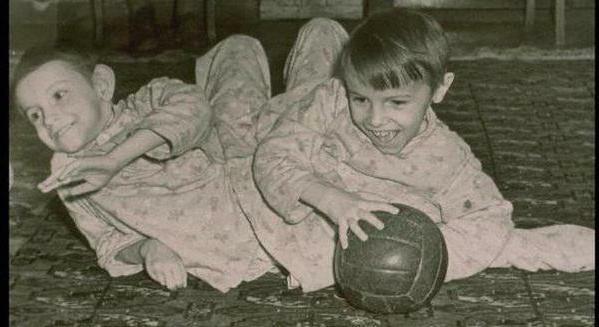 Mikhail Krivoshlyapov worked as a personal driver for Lavrentiy Beria, and his wife, Ekaterina Krivoshlyapova, was a housewife. The young couple dreamed of children and were incredibly happy when they heard about the pregnancy that had come. The belly of Catherine increased quickly enough and amazed with its size, all relatives immediately guessed: you should wait for twins. January 4, 1950 by caesarean section on the light appeared Siamese twins Masha and Dasha. According to one of the versions, the doctor who took delivery, from time to time allowed himself to drink alcohol in the workplace. He abused and on the day of birth of unusual children. Seeing the twins, the doctor lost consciousness, and waking up, decided never to drink alcohol again. Mothers of unusual sisters said that her children died almost immediately after childbirth. However, one of the nurses could not look at the experiences of the young woman and secretly showed her the girls. After seeing Catherine experienced a serious shock and for several years went to a psychiatric hospital. 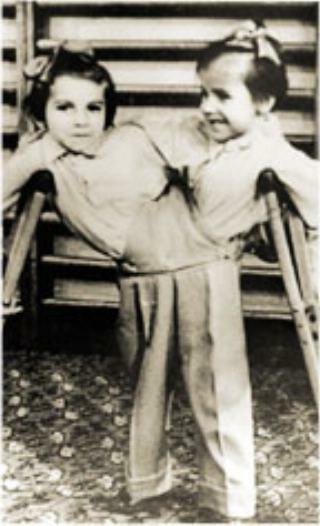 Physiological features of the

sisters Twins Krivoshlyapovs had two heads, four arms and three legs for two. The bodies of the sisters were connected at an angle of 90 degrees. The scientific name of this developmental anomaly is dicephales tetrabrachius dipus. Also twins in case of fusion of their lower extremities, pelvis and abdominal wall are often called ishiopagi. Scientists, of course, interested in these children. There were many questions: are there any common internal organs, and how does such a double organism function in general? Separation of Siamese twins - in those days a rare operation. However, it was necessary to study all the physiological possibilities, after which it was possible to consider this option. 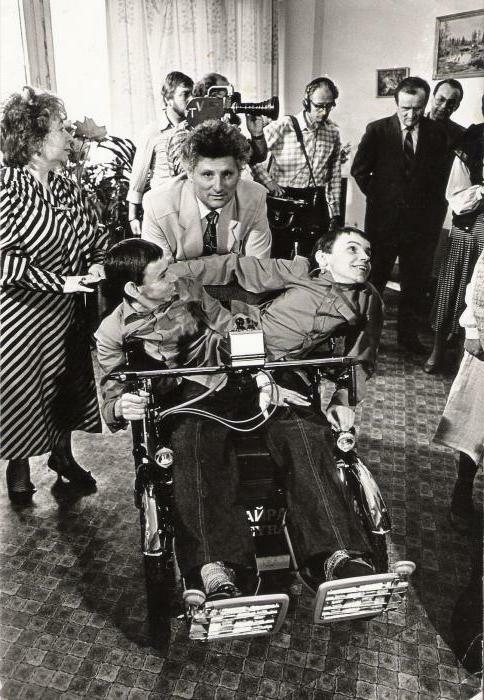 The first seven years of her life, Siamese twins Masha and Dasha were held at the Institute of Pediatrics of the USSR Academy of Medical Sciences. In their mature interviews, the sisters remembered that time with horror. According to Masha and Dasha, various experiments were conducted daily on them, sometimes simply horrifying with their cruelty and morbidity. Once the girls were laid on the ice in order to make them ill, and the doctors could observe the body's reactions to the acute stage of the cold. After such an investigation, the sisters spent several days with a temperature of about 40 and were mentally prepared to say goodbye to life. But the girls were stronger and survived.

On the seventh birthday of the sisters, doctors received all the interesting data and successfully defended more than one dozen dissertations. After that, Siamese twins Dasha and Masha Krivoshlyapova were transferred to the Central Research Institute of Traumatology and Orthopedics. It was there that the girls met their second mother - a nurse Nadezhda Fedorovna Gorokhov. This woman was the first to treat the Krivoshlyapov as an ordinary child, not a scientific exhibit. In the institute, the sisters received their primary education and learned to walk.

Time passed, and interest in unusual twins faded. In adolescence, the sisters were amputated to the third leg, after which they were deported from Moscow to Novocherkassk, to a regular boarding school for children with motor problems.

From the world of science to the real

Siamese twins Masha and Dasha suffered a lot from doctors in the first twenty years of life. But if life in scientific institutions was not very pleasant and easy, then after the very real hell began. In the boarding school, the sisters immediately disliked. Other children constantly mocked them, sometimes offended physically.

After amputation of the third leg, the sisters could only move on crutches or a wheelchair. The "extra" limb performed a supporting function, losing it, the girls felt worse. Moreover, in some interviews, the sisters talked about experiencing phantom pains from time to time.

After 6 years of life in the boarding school in Novocherkassk, the Krivoshlyapov sisters returned to Moscow. It was 1970, they did not immediately find a place for permanent placement. But after some time they were placed in an orphanage for the elderly. There the women lived until their death. Neighbors in the nursing home recalled Dasha and Masha gloomy and aggressive. Sisters never smiled, often swore, sometimes they drank. 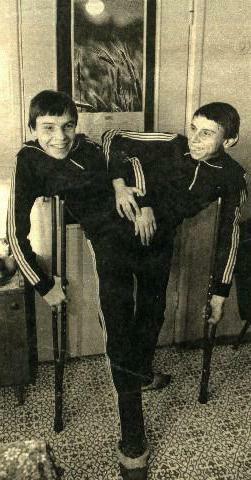 Was it possible to separate?

According to some sources, in 1989 the sisters were offered a separation operation. No guarantees in such cases, no one gives. Often, the operation ends with the death of one of the twins or two at once. In addition, the case of Krivoshlyapov's sisters was unique and complex in itself.

Masha and Dasha had a common circulatory system and some internal organs. The division of Siamese twins with this structure rarely has positive results. Whatever it was, even if the operation was offered, the sisters refused it, without hesitation. They were too much connected to each other. Journalists told women that they see only dreams and even read each other's thoughts. If you eat alone, the second does not feel hungry, and even the mood is often one for two. 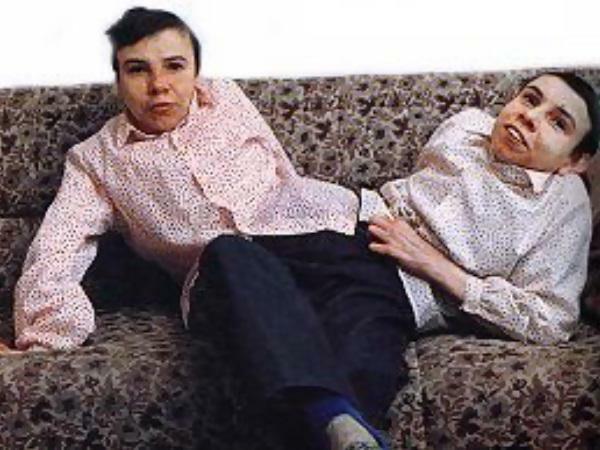 Relations with family and society

Incredibly famous Siamese twins in the USSR Masha and Dasha were the first children of their parents. After the girls were born, their mother was treated for several years in a psychiatric institution. After recovery, the woman tried to find her children, but the meeting did not take place. The sisters assert that they themselves found their mother and met her in adulthood, they were then 35 years old. The father was never interested in the fate of his children. They did not want to communicate with unusual sisters and two younger brothers who were born perfectly healthy. With the mother, Masha and Dasha kept in touch for a while, but then refused to see each other again. The society was hostile to the unusual sisters. Siamese twins Dasha and Masha Krivoshlyapova visited Paris in adulthood. They were shocked that in Europe passers-by on the streets did not look at them, and everywhere they were treated like the most ordinary people. 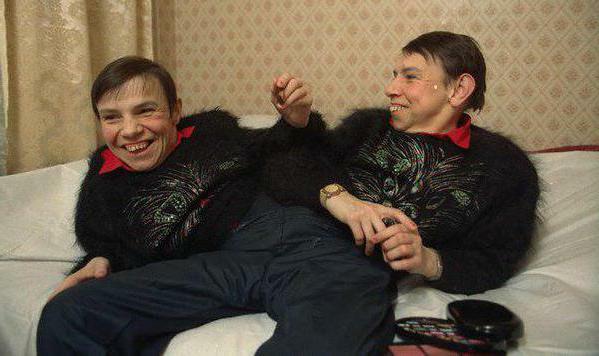 Not so often there are Siamese twins in Russia. Masha and Dasha showed their entire conscious life to others that they are two different people. Indeed, initially the girls had one birth certificate for two, and they did not want to give them two passports. At the same time, sisters were radically different in their characters and habits. Dasha was more vulnerable and soft, and Masha - quieter, in something - rude. It is difficult to believe in it, but despite their physiology, the sisters managed to fall in love and once even almost got married. Dasha always dreamed of children and her family, but doctors in her youth told her that she should not think about that. According to some sources, the sisters tried to commit suicide, and more than once. If such stories can be safely attributed to gossip and rumors, that is, irrefutable facts. In the last years of her life, Dasha began to drink heavily. Doctors even coded the sisters for alcoholism, but this measure did not help.

The sad end of

On April 13, 2003, Dasha woke up and called the doctor, because she felt very bad. The sisters were hospitalized, and it turned out that Masha had already passed away. The diagnosis was "acute infarction".Alive Dasha was told that her sister had been given an injection of a potent drug, and she was just asleep. At this time, intoxication began, and after 17 hours the second of the twins died. Sisters at that time were 53 years old. This is a rare case, because many other stories of Siamese twins end just a couple of years after the birth of unusual children. According to experts, Masha and Dasha could live longer if they refused to drink alcohol. 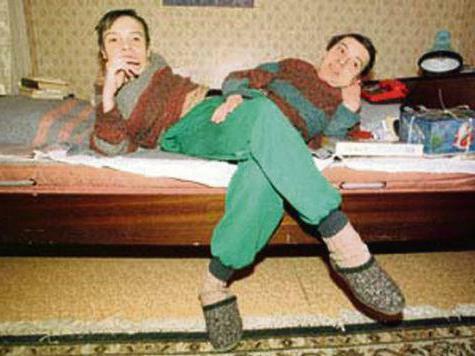 Media about twins of Krivoshlyapovs

At first, the sisters were assiduously hiding from the public. Specialists believed that such a spectacle can frighten and shock Soviet citizens. But in the course of time, documentary films and publications in the press began to appear. Gradually, the Krivoshlyapov sisters became known to the whole world and are quite popular. In adulthood, they from time to time personally gave interviews and communicated with journalists. This unusual story has been covered many times in major print media and even on Central Television. Many viewers remember, for example, the release of the program "Let They Say" dedicated to Krivoshlyapov. Siamese twins Masha and Dasha from such fame have not received anything. The sisters lived their lives modestly, and the main source of income was their disability pension. After the death, the Siamese twins were cremated, their remains are buried in the columbarium at the Nikolo-Arkhangelsk cemetery.