"Magnelis B6" during pregnancy: reviews, instructions for use and composition

The human body throughout the whole life constantly needs vitamins and minerals. Insufficient magnesium during the waiting period of the child adversely affects its intrauterine development and the state of health of the future mother. To compensate for the necessary amount of a macronutrient in the body, you need to take specific medications. It is "Magnelis B6" in pregnancy, according to reviews, will be able to replenish the lack of magnesium.

Why do specialists prescribe the drug?

During pregnancy, most often in the female body, there is a lack of magnesium. It is interconnected with hormonal changes. If a long time in the body will not be enough magnesium, it can lead to spontaneous termination of pregnancy. Therefore, a huge help is provided by drugs that contain this macronutrient. They include "Magnelis B6".Doctors write out the drug with the appearance of nervous tension and hypertension of the uterus during the period of bearing of the child.

According to reviews, "Magnelis B6" during pregnancy is used by women to prevent this condition. In the second half of the term, the course of magnesium alternates with drugs containing calcium. Therefore, the risk of avitaminosis or lack of macronutrients in the future mother and fetus decreases.

"Magnelis B6" will supplement the body's quantity of magnesium and vitamin B6, which will reduce the impact of stressful situations, improve the metabolism and reduce muscle tone. This will work correctly for many systems of the body.

For the first time the element was applied in obstetrics more than 110 years ago. In 1906, Michelle Bertrand appointed a pregnant woman magnesium sulfate for the removal of seizures that occurred with late gestosis.

Sometimes experts prescribe drugs with magnesium during the period of pregnancy planning, in order to avoid further lack of minerals and vitamins, which are necessary for the body in the first time after conception.

The appointment of "Magnelis B6" to a woman waiting for a child is vital if:

Most often, a deficiency of magnesium appears in the second semester of pregnancy, when the child begins to grow rapidly and develop. According to reviews, "Magnelis B6" in the early stages of pregnancy can be prescribed by a specialist in especially severe pathologies.

If necessary, the drug is used as a solution for intravenous injection. The procedure is carried out only in the hospital if there is a threat of abortion.

"Magnelis B6" - a drug in which there is a therapeutic dose of magnesium and vitamin B6.The preparation is in the form of a dragee. This remedy is considered an analogue of the famous French medicine - "Magne-B6".The drugs have similar properties and chemical composition. 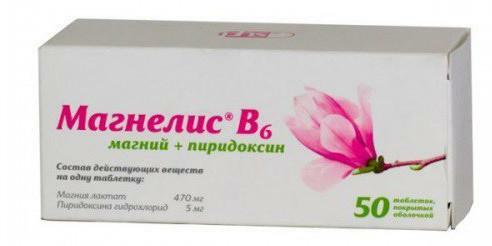 In "Magnelis B6" element is present in the form of magnesium lactate. This form of the macroelement is often used in medical practice to replenish its insufficient quantity. Vitamin B6 helps to improve absorption of magnesium from the digestive tract and promotes its penetration into cells. That is why he is constantly present in such drugs.

According to reviews, "Magnelis B6" during pregnancy normalizes the health of women and children. When the magnesium level in the body recovers, 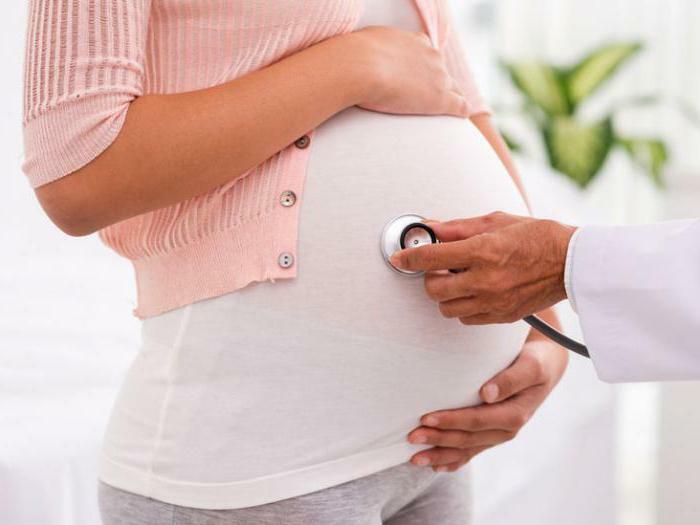 The drug should be used strictly for the purpose of a specialist, in cases where the beneficial effect of therapy exceeds the negative effect on the fetus.

How to take "Magnelis B6" during pregnancy? According to reviews, a specialist can prescribe a drug to a woman in any trimester, but not earlier than the fifth week.

Dosage and duration of admission are set individually, but the daily average is 6-8 pieces. Usually they are drunk 3-4 times a day.

Swallow a dragee during or after a meal, with plenty of water( at least a glass).The time interval between doses may be 6-8 hours. After receiving the result, the doctor will adjust the daily dose.

According to reviews, the dose of "Magnelisa B6" during pregnancy should be determined by a doctor, taking into account the lack of a macroelement in the body of a woman. This will prevent the occurrence of adverse reactions.

The combination of the drug with other drugs

According to reviews, "Magnelis B6" during pregnancy is characterized by some features that need to be considered: 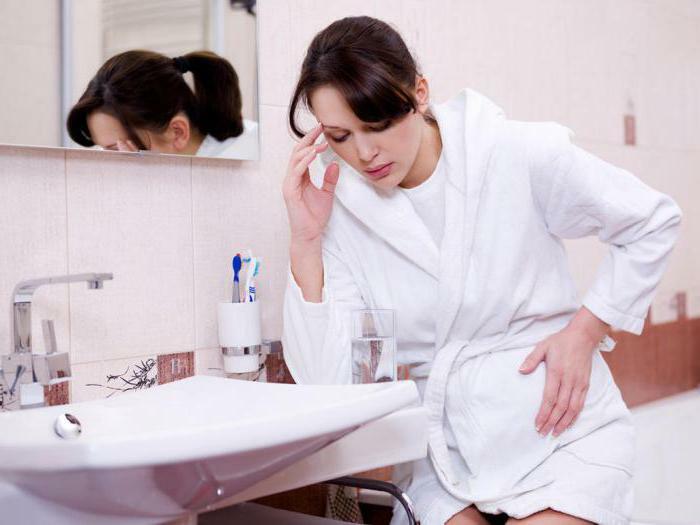 Specialist must pay attention to such features when assigning "Magnelis B6".

According to reviews, "Magnelis B6" during pregnancy is completely safe for the fetus. He does not affect his fetal development negatively both at early and late. Sometimes when taking the drug there are:

In some cases, allergic reactions may occur. Side effects are rare. 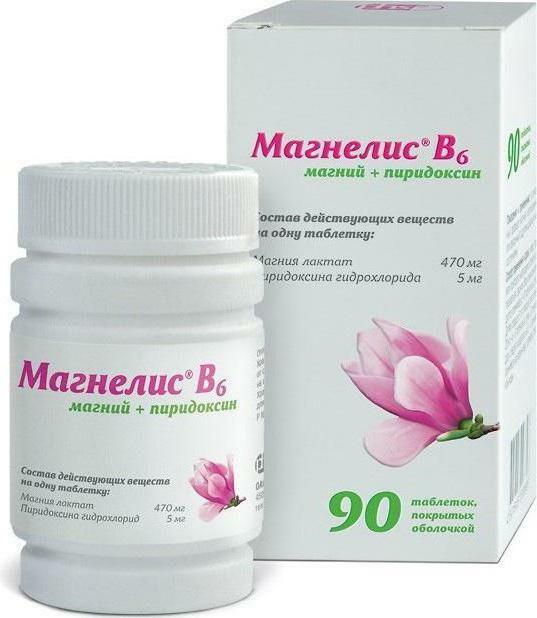 Use "Magnelis B6" not recommended when:

Magnesium is excreted from the body by the kidneys, so if their activity is disturbed, then there is an overdose and dispatch. It manifests itself in the form of low blood pressure, nausea, vomiting, shortness of breath and other signs.

Women should be aware that magnesium penetrates into breast milk, so use of "Magnelis B6" during breastfeeding is prohibited.

Opinions of a woman about

According to reviews, "Magnelis B6" during pregnancy is prescribed for many women. Due to the affordable price and the same components with the French analogue "Magne-B6" many women prefer this drug and do not regret their choice at all. 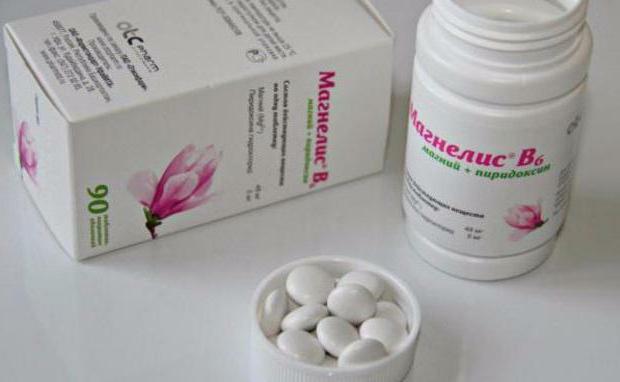 "Magnelis B6" helps to reduce the tone of the uterus and positively affects the nervous system. After the course of admission, insomnia disappears and cramps in the lower limbs disappear. The bulk of feedback on the product is positive.

Some patients claim that after using the drug, they experience nausea and vomiting. However, such reviews are found in very rare cases.

According to the doctors' reviews, "Magnelis B6" during pregnancy is an excellent help for a woman in the period of bearing a child. In the natural process of child development, he does not interfere, but helps to develop correctly. This can be observed on ultrasound and the results of analyzes. 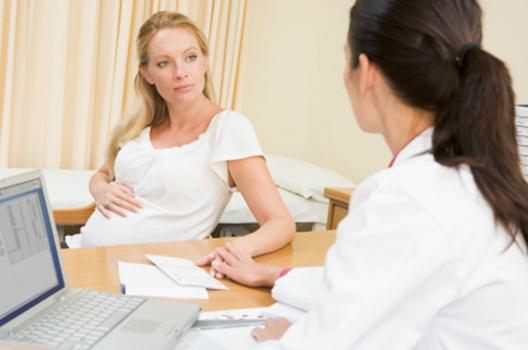 Many doctors advise doctors to take magnesium preparations, including Magnelis B6.The agent is most often prescribed from the thirteenth week of pregnancy, but if necessary, it is used at earlier times.

Specialists are allowed to take the drug, starting from the second month of pregnancy, if it becomes necessary to remove hypertension of the uterus. Independently, the means of use is not recommended because of the possible occurrence of adverse reactions.