Fracture of the sternum: symptoms, causes, treatment and consequences

The sternum is a part of the bone skeleton of a person located in the front of the thorax and along with the ribs it protects the organs from mechanical influences from the outside.

Breastbone fracture is considered to be one of the most dangerous types of trauma in trauma, which is associated with the possible occurrence of severe complications.

Anatomy of the sternum

The sternum is dagger-like in its structure. It has the following parts: the handle, the body and the xiphoid process located in the lower part of the sternum. 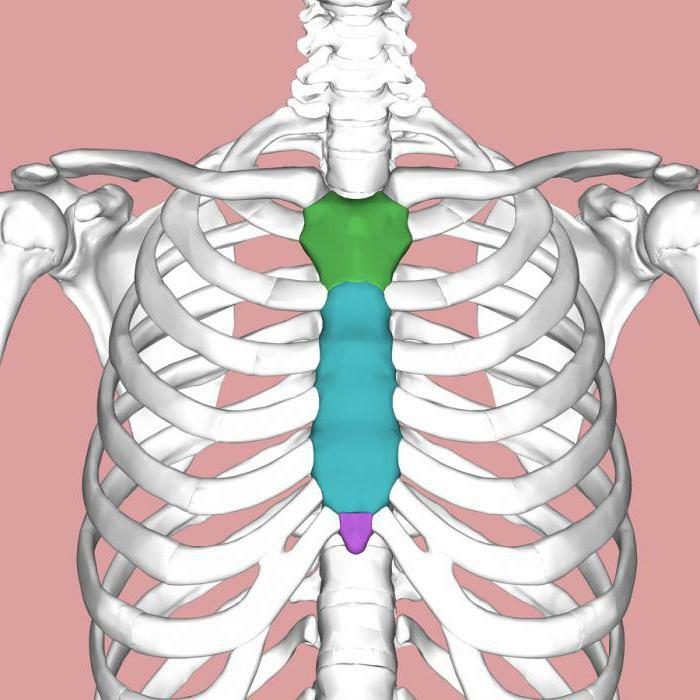 A small notch is located at the top of the sternum - a jugular notch, and on its sides there are scissors clavicles, which are the place of attachment of the sternal ends of the clavicle.

The body of the sternum on its lateral surfaces has recesses to which the costal cartilages are attached( beginning with the second rib).The junction of the body and the crust of the sternum protrudes slightly, forming the angle of the sternum.

It should be noted that this part of the bone skeleton in different people can vary in size, shape. There may be a split sternum or a hole in it.

Speaking of the sternum, it is impossible not to remember that in the spongy substance from which it consists, there are a large number of blood vessels, which allows blood transfusion in this area. Also of great importance in practical medicine is the presence in the sternum of the developed bone marrow, which opens up great opportunities for his donation.

The main causes of fracture of the sternum

Most often, such a fracture is the result of direct mechanical action on the sternum. This is a strong blow to the chest about the different parts of the car at the time of the car accident or directing the blunt object into the chest. In this case, combined fractures can occur with damage to the ribs, leading to various complications. Most often there are rib injuries at the junction of the handle and body of the sternum. 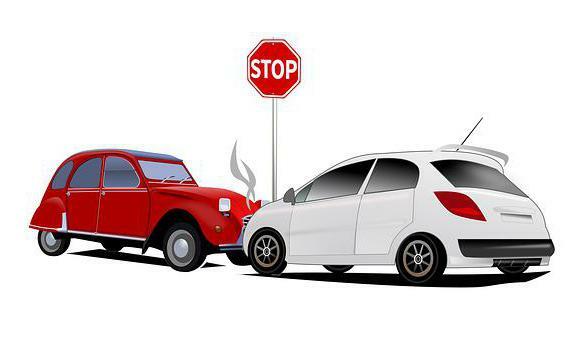 Depending on the severity of the damage, the following are distinguished:

Depending on the damage to the skin, the following types of fractures are distinguished:

The open type of fractures is the most dangerous, due to the risk of infectious diseases on the wound surface, which is associated with the development of further septic complications.

Depending on the location of bone fragments are distinguished:

The fracture of the sternum with displacement is characterized by a violation of the anatomical location of the bone fragments, which leads to serious damage to neighboring organs( pleura, lungs, heart, diaphragm) with the development of appropriate complications.

Signs of a fracture of the sternum are pathognomonic enough, that is, specific for this type of injury: 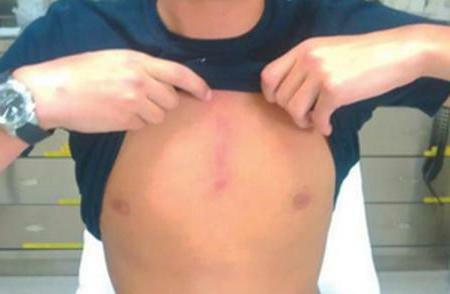 It should be noted that these symptoms of a fracture of the sternum may not manifest themselves if an incomplete fracture( cracks) occurs. Therefore, after a serious chest injury, it is important to consult a doctor in time.

If the displacement of fragments is significant, it is possible to injure them with the lungs, pleura, or organs located in the mediastinum.

Treatment of fractures without bias 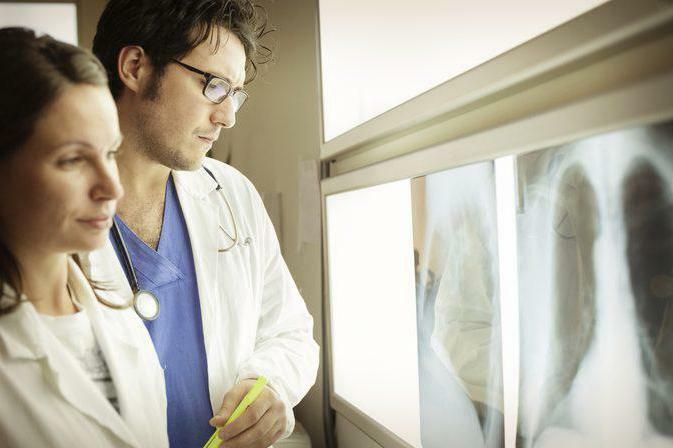 This variant of the fracture is better suited to conservative treatment.

The first stage of treatment of such fractures is the introduction of 20 ml of 1% novocaine solution into the damage area and the appointment with analgesic of analgesics of systemic action.

In connection with the development of difficulty breathing in such cases, it is advisable to use inhalations with moistened oxygen.

Further, it is necessary to apply a wide band of specialized patch along the entire sternum, which will fix the chest for two weeks.

Treatment of fractures with bias

If the displacement is still present, then restoration of the integrity of the sternum is possible by manual repositioning of the fragments. Of course, this action is carried out after an effective analgesia. After the reposition, the patient should lie on the bed with a shield for three weeks. A roller is placed between the patient's shoulder blades. Thus, a long re-expansion position results in a gradual restoration of the position of the bone fragments. 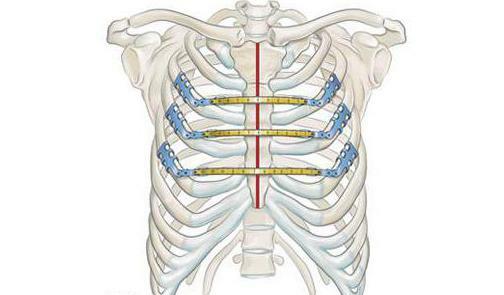 Unfortunately, not always the structure of the sternum is restored in this way. In some cases, doctors have to resort to surgical treatment of the sternum fracture - osteosynthesis with cross spokes or plates.

Workability is then restored within two months.

Fractures of the ribs and sternum, especially with a significant displacement of fragments, are often accompanied by severe conditions requiring immediate medical attention by specialists. This is due to the fact that this part of the skeleton, which accounts for the traumatic effect, is located in close proximity to the vital organs - the heart and lungs. Bone fragments can damage the serous cover of these organs, violating their integrity.

The consequences of a fracture of the sternum are: 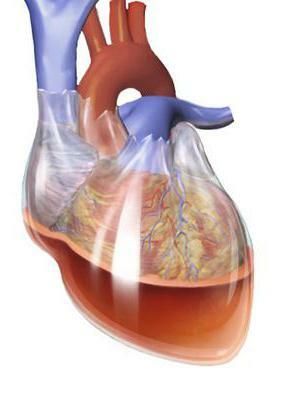 In cases of chest injuries, attention should be paid to the emerging symptoms that accompany such pathological conditions. The best option is to immediately consult a doctor.

In the event of such a pathological condition, characteristic symptoms appear:

If you have these symptoms, you need emergency medical attention.

If the amount of blood in the pericardium is insignificant, then conservative treatment with bed rest and prescription of painkillers, blood-resuscitating and cardiac drugs is possible.

In case of rapid accumulation of blood in the pericardial bag, the risk of cardiac tamponade and death in the first minutes of its occurrence is high. Such situations arise when a 400-500 ml blood sample is located in a pericardial bag. Then, urgent measures are needed in the form of draining the pericardium or pericardiocentesis with aspiration of blood with a needle inserted into the pericardium, by depressing blood pressure on the heart and restoring the cardiac activity. These measures are carried out under the control of echocardiography and ECG.

In the case of direct heart damage, a surgical operation is performed to restore the integrity of the organ and stop bleeding. It is necessary to carry out simultaneous resuscitation - oxygen therapy and restoration of blood loss by transfusion of blood plasma, its components and infusion solutions.

This complication is manifested by a severe general condition, a significant decrease in blood pressure, a frequent thread-like pulse and shortness of breath. Visually, the person is cyanotic-pale due to the development of respiratory failure. 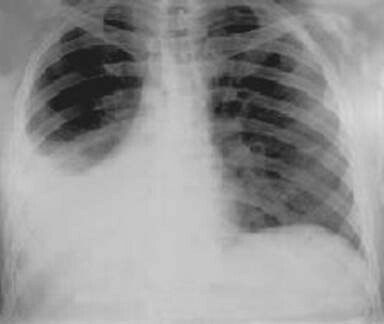 Treatment of hemothorax consists in puncturing the pleural cavity and evacuating blood from it. At the same time, the volume of blood is replenished.

In the case of rapid and continuing blood loss, a large surgical operation is required - thoracotomy.

This complication occurs in every third person with a chest injury. There is pneumothorax increased blood pressure, minor tachycardia and shortness of breath.

Need puncture of the pleural cavity in 2-3 intercostal spaces along the sredneklyuchichnoy line and the installation of drainage, the free end of which descends into the water.

If air bubbles through the drainage are released for more than 2 days, which is a sign of damage to the large bronchus, thoracotomy is also necessary.