The so-called duck's gait can become a sign of serious hip joint disease. In this article, we will talk about the sign of which diseases this pathology can be in adults and children. And also consider the reasons for the appearance of such a gait in pregnant women. 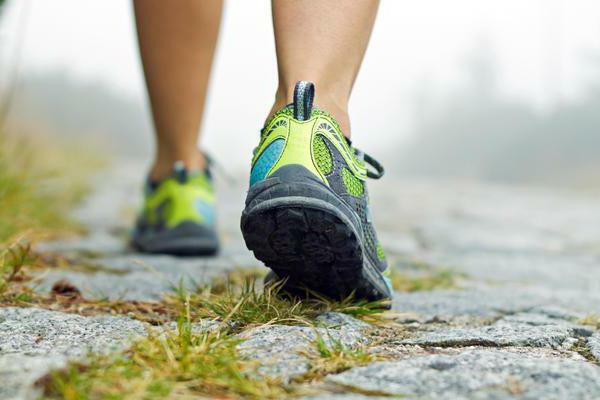 Causes of pathology in adults

"Duck walk" is typical for diseases of the hip joints, in particular coxarthrosis.

This disease is chronic and leads to the gradual destruction of bone tissue that forms the hip joints. There are many reasons for the pathology, but the main one is permanent trauma of the musculoskeletal system. The development of the disease leads to the fact that the joint gap begins to narrow. At the last stages of the disease, it can disappear completely.

In adults, "duck walk"( the causes of the disease in children will be discussed below) can be caused mainly by coxarthrosis. This pathology can develop in people of all ages, except for very young children. Men suffer from it more often than women. This is due to the fact that their physical activity is usually higher. The elderly are most prone to coxarthrosis. At this age, the nutrition of the tissues begins to be disturbed, and the ability of the organism to recover is reduced.

So, the "duck's gait" at what disease appears in adults? In general, with coxarthrosis, as its cause can only be the destruction of joints. But how does this happen and where does it begin? How not to start the process and start treatment on time? 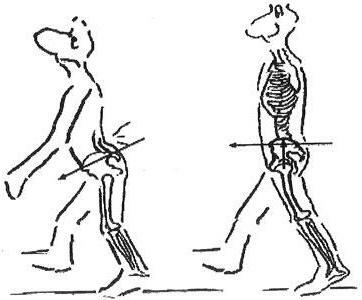 Regardless of what caused the appearance of the disease, it will always develop according to one scheme. The healthy surfaces of the joints always correspond to each other, so that the load is distributed evenly. However, due to various deleterious effects, there is a deformation of the hyaline cartilage, the main component of the articular cavity. This leads to a violation of the congruence of articular surfaces. A consequence of this is the uneven distribution of load on the joint during movement. That part of the cartilage, which accounts for most of the weight, is gradually deformed and even cracked. And the surface of the joints becomes rough and uneven.

This process entails compensatory reactions. First, the cartilaginous tissue begins to grow in the damaged area. If the load does not decrease, it gradually dies, and in its place the bone is formed. This leads to the formation of osteophytes( bony outgrowths), which gradually fill the joint. Approximately at this time and there is a "duck walk".It indicates the neglected state of the disease. If you do not start treatment in time, then the joints may permanently lose their mobility.

Causes of the occurrence of

The cause of coxarthrosis may be:

There is also idiopathic coxarthrosis, the cause of which remains unknown to medicine.

Symptoms that accompany the destruction of

joints The danger of coxarthrosis is that it is diagnosed already in the late stages. The fact is that in the affected areas there is no swelling of the tissues, various swellings, and so on. 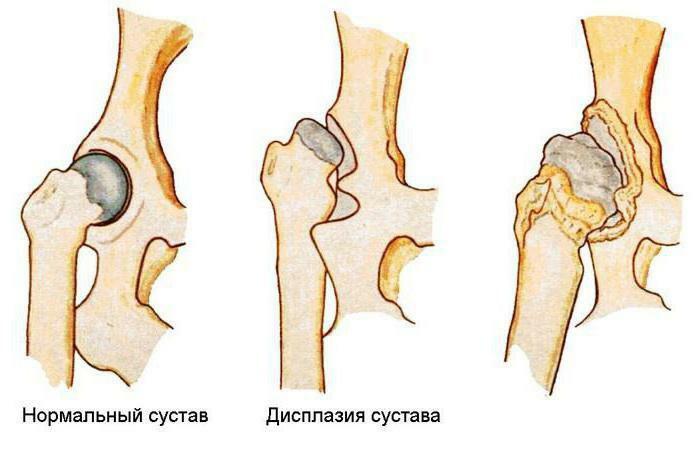 How to identify the disease before the advent of "duck gait"

"Duck walk" is in itself a serious clinical sign for diagnosing. But at this stage, treatment will be already ineffective, so it is better to start much earlier. And for this it is necessary to diagnose coxarthrosis at earlier stages. For this, there are a number of methods that should be used when the first signs appear. We list the main diagnostic tools:

In this pathology, patients have two variants of gait variation. The first appears with the lesion of only one joint, the second - with the disease of two. The last option is called "duck walk".Let's take a closer look at what is happening at that moment with the joints. 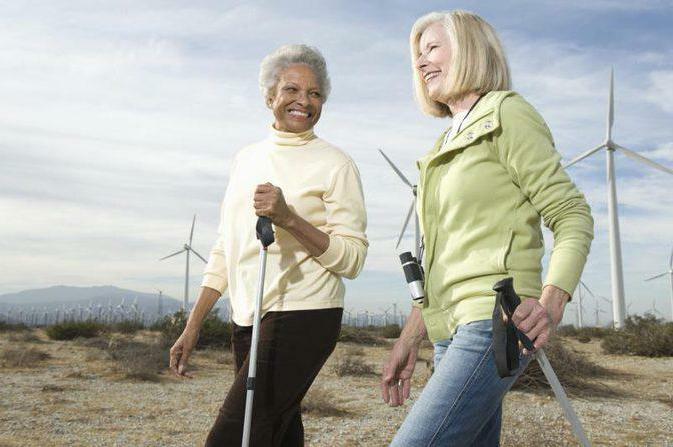 So, the wrong campaign appears after the bone tissue in the articular cavities began to crack. At this moment, the "leading contracture" begins to form, that is, the patient's legs take a slightly bent position to the inside. The patient can not return to the normal state on his own. During movement the person is compelled to transfer weight of all body from one leg to another. This is accompanied by swinging movements from side to side. That is why the gait and received in the people the name "duck".

However, such a serious change in the position of the musculoskeletal system is characteristic already for the advanced stages of the disease. What is especially dangerous, such a transfer of the severity of the body leads to a curvature of the spine and lesions of the knee joints. Therefore, doctors advise using crutches or walking sticks( always two) to reduce the load.

The change in gait in a woman during pregnancy has nothing to do with coxarthrosis, and causes her completely different reasons. Usually the gait changes in late pregnancy, the month on the eighth-ninth. Women really start to spread their legs widely and at the same time they are slightly shifted from one foot to the other.

But still let's find out the reasons for such changes. Of course, they depend on the physiological changes taking place in the female body:

In this case there should be no pain in the hip joints. If they appeared, then we can talk about symphysitis, then we need to urgently consult a doctor. Otherwise, nothing terrible happens. Change gait - a natural process.

What should I do if I get pregnant with a "duck's gait"?

"Duck walk" in women can become a real psychological problem. Future mothers are already emotionally vulnerable, and such a huge, from their point of view, flaw deprives them of all attractiveness. However, do not despair. As polls show, such gait of pregnant women causes only sympathy and a lot of positive emotions. 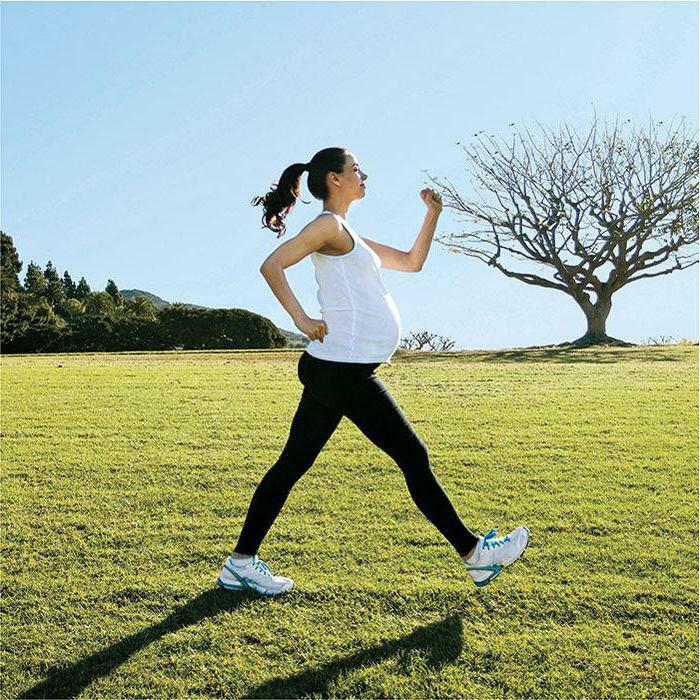 Unfortunately, it's impossible to answer the question about how to get rid of "duck gait" during pregnancy. Will have to wait for childbirth. As soon as the child is born, the old path will return to you. A bit of relief can the bandage, which will reduce the burden on the spine. But it will not bring any dramatic changes.

"Duck walk" in a child

The cause of pathology( dysbasia) in a child may be changes of an orthopedic or neurological nature. These changes can be caused by diseases of the central nervous system and peripheral, as well as diseases and congenital defects of the joints. The options for breaking the gaits are more than 20, but the "duck" is the most common.

This type of pathology is characterized by the above-described climbing from foot to foot. And the cause of its appearance are changes in the hip joints, accompanied by painful sensations. This gait not only causes discomfort, but also leads to other disorders of the musculoskeletal system.

Reasons for "duck gait" in children

In 90% of cases, there is a "duck walk" in a child with dysplasia, pathological changes in the hip joints. This ailment leads to pseudoarthrosis and chronic dislocation.

Dysplasia is a very common disease that affects 3% of all newborns. And in 80% of all cases suffer from the ailment of the girl. If the pathology was discovered in infancy, you can try to fix it with the help of special bandages.

Also the cause of the "duck gait" may be inflammation in the nerves of the lumbosacral plexus or sacroiliac joint. 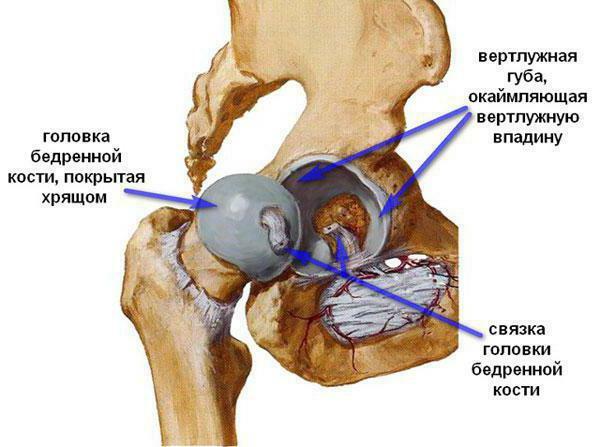 "Duck walk" in the child indicates the presence of a rather serious deviation, which must be diagnosed and treated.

The therapeutic complex will depend only on the cause of the disease. As noted above, in some cases with early diagnosis it is possible to completely get rid of such a gait. But it all depends on the specific case, the speed of care and the qualifications of the specialists who prescribe the treatment.

Exercises to correct a "duck's gait" in case of a disease should be carried out only after consultation with the attending physician. Here we do not consider cases with pregnant women and children, as this is a completely different category, and the complex of exercise therapy should be developed for them individually. 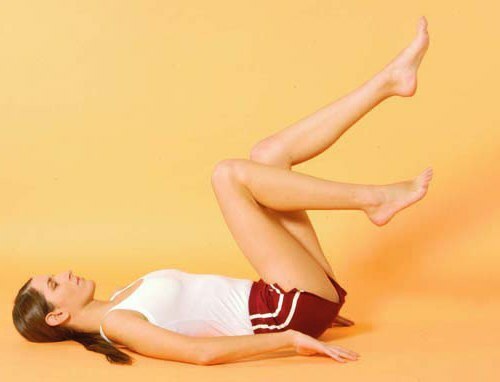 These exercises are designed to not load a diseased joint, but to develop it. Do not rush, do all the tasks very slowly. Do not overload your legs. If pain occurs, the complex should be interrupted. Do not perform all exercises at once. First learn the first, then after a couple of days, connect the second one and so on. Gradually you can increase the number of approaches, but only in the absence of unpleasant sensations in the joints. It takes a lot of patience and perseverance, but the result is worth the effort.