Sanatorium-dispensary "Fakel"( Divnomorskoe)."Torch" - sanatorium with its own beach. Reviews and photos of holidaymakers

If we decide to search for the resort Divnomorskoe boarding houses with its own beach, the sanatorium "Fakel" seems to be the best choice. It is located a little away from the village, so there even in the high season there is no fuss and rumbling music. However, guests of the sanatorium, isolated from civilization, do not feel themselves. Every day merchants with Krasnodar fruits come to his gate. Yes, and to the city of Gelendzhik not far - about ten kilometers. What do they say about the rest in this health resort? We tried to analyze them and compiled a digest, which was laid out in this article. On the terms of accommodation, meals, beach and services provided, read below. 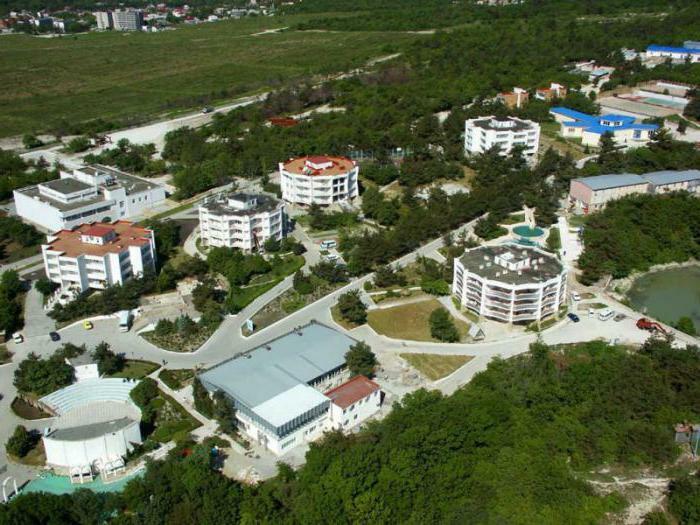 Where is the sanatorium "Fakel"( Divnomorskoe village)

The buildings of this health resort are located on a mountainside in a very picturesque area on the first line from the Black Sea. The address at the sanatorium is the following: 353490, Krasnodar Territory, the city of Gelendzhik, the village. Divnomorskoe, Kurortnaya Street, 1. The main resort, as mentioned above, is located twelve kilometers away. From Gelendzhik to the village Divnomorskoe run shuttle buses and minibuses. Travel time, according to reviews - about ten minutes. You can get to Gelendzhik in several ways. The closest railway station is Novorossiysk. It is only thirty-five kilometers from the Gelendzhik bus station. This way can be overcome on a public bus or on a fixed-route taxi. Public transport runs from more remote railway stations in Krasnodar( 180 km) and Tuapse( 121 km).For those who come to the Black Sea resort by plane, the reviews give the following information. From the airports of Anapa and Krasnodar, there are regular buses to Gelendzhik. But the resort itself has its own air harbor. Coming out of the arrivals hall, it will be enough for you to say to any taxi driver: "Divnomorskoe," Torch "(sanatorium)", as he will immediately understand and take you to the place in twenty-five minutes. You can get to the health resort and by public transport: first to the Gelendzhik bus station, and from there by shuttle bus to the resort village. 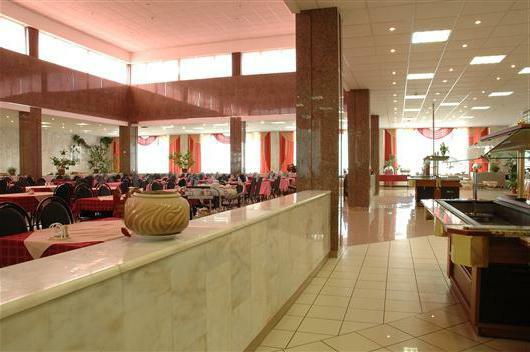 Sanatorium-dispensary "Fakel"( Divnomorskoe) belongs to "Gazprom".But this does not mean that the health center is completely departmental, and there is no way to get to the "outside person".Of the five hundred and fifty places, two hundred have been booked for employees and employees of Gazprom Transgaz Surgut, who rest and heal there on a five-percent ticket. The remaining three hundred and fifty places go to free sale. And these "people from the outside" can only pay accommodation and meals, or a full package of services( with treatment).In total, the sanatorium has seven buildings and two VIP cottages. There is a separate medical center and a dining room for five hundred people. All these buildings stand among a subtropical garden with an artificial lake. On the territory of the sanatorium there are tennis courts, a swimming pool, a children's playground, a mini-golf course, open-air dance floors, parking. The park descends to the pebble beach, where there is a bar and a snack bar. 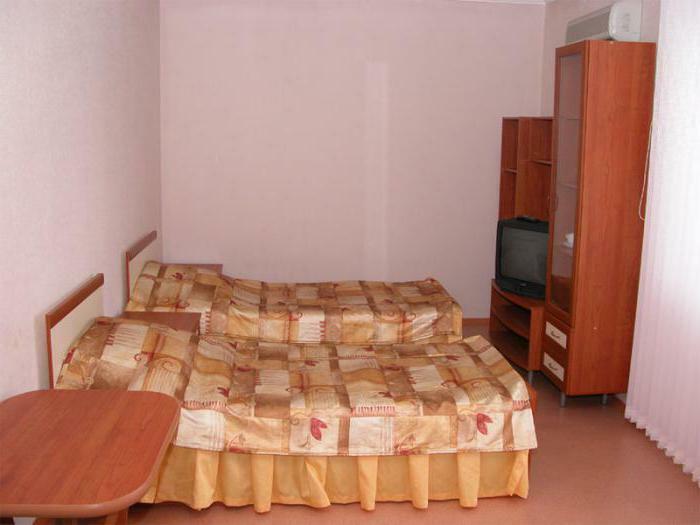 Where do they settle?

What do people who are vacationing in the resort village Divnomorskoe say about accommodation?"Torch"( sanatorium) places departmental guests in the best central buildings. Practically from any point of the sanatorium the charming panorama of the Black Sea opens. Those guests who pay the full cost of the voucher get numbers in remote 10 A and 10 B or in the ground floors( without balconies) of the first and fourth buildings. These buildings are located two hundred meters from the beach and to get to them, you need to go downhill. This year-round sanatorium, and those who came "out of season", can get the best, departmental places. The room is divided into standard, junior suite and suite. The first category is located in the building 10 B. There is a bathroom, showers and a TV are on the floor. In the room of the amenities there is only a refrigerator. In the 10A building there are junior suites. They have a bathroom with a shower( hygienic supplies are given only on the day of arrival), a refrigerator and a TV.Suites( one and two-room) are supplemented with soft furniture, air conditioning, telephone, hairdryer, electric kettle. 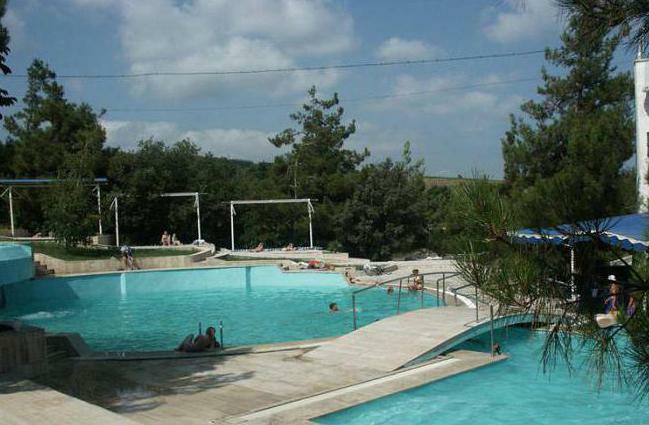 Many guests of the sanatorium come there not so much to relax on the Black Sea coast, how much to be cured. What is the medical profile of the health resort? The site of the sanatorium notifies that it treats diseases of the musculoskeletal, nervous and genitourinary systems, as well as respiratory organs. Reviews also mention other procedures that successfully eliminate problems with digestion and circulation, help to fight excess weight and remove( at least outwardly) lived years. Here you can go and a comprehensive examination of the body in the diagnostic center, which has a sanatorium "Fakel"( Divnomorskoe).The buildings of the health resort, except for 10 A and B, are in the immediate vicinity of the clinic. In order to open a course, you must have a spa card. Children are admitted to treatment strictly after four years. 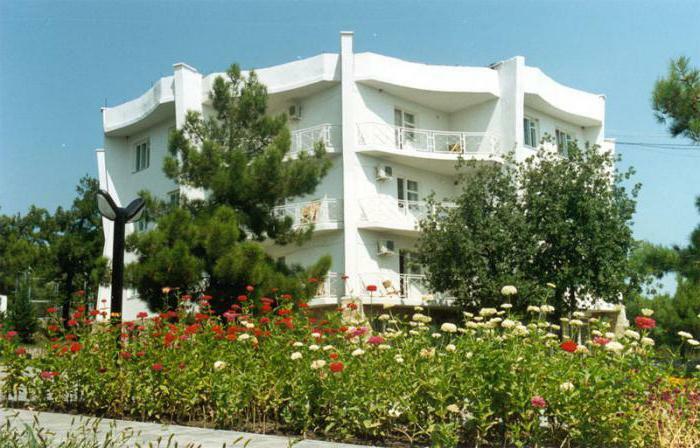 What should tourists count on coming to health resort in Divnomorskoe resort?"Torch"( sanatorium) has the latest medical equipment and it employs qualified medical staff. In addition to the therapist and pediatrician, here you can get advice from a urologist, gynecologist, neurologist, cardiologist. The doctor after the examination arrives procedures: ECG, ultrasound, galvanic mud, whirlpool baths, acupuncture, water treatment. If necessary( in the case of gastrointestinal diseases), the doctor prescribes diet food. The reviews state that there is a salt cave in the sanatorium. Doctors often prescribe aromatherapy, massages and therapeutic gymnastics, turpentine and carbonic baths. For patients with painful respiratory organs, inhalations, an infrared sauna, phytotherapy are prescribed. In the diagnostic center it is possible to donate blood for analysis in a clinical and biochemical laboratory, to be examined on SCENAR.

The price includes three meals a day on a buffet. Breakfasts and dinners are held in one shift, and lunches - in two. Guests of the buildings 10 A and B eat in a separate dining room. But do not forget that in the village Divnomorskoe "Torch" - sanatorium. If the guest arrived not just to rest by the sea, but also to receive medical treatment( especially in the case of gastrointestinal diseases), the doctor appoints him diet food. It is four meals a day, and the kids are fed five times a day. Food is, of course, no longer in the buffet format, but on the custom menu. Reviews say that on the line of the buffet are fed dietary dishes. For dinner cook jelly, for dinner, they serve kefir. The kitchen is mostly Russian, the dishes are delicious. Waiters serve quickly. At the buffet, new dishes are replenished as the old dishes disappear. Cooks try to satisfy requests in food for both adults and children. In addition to the dining rooms, there is a "Parus" bar on the beach and the "Neptune" cafe on the shore of the lake on the territory of the sanatorium. 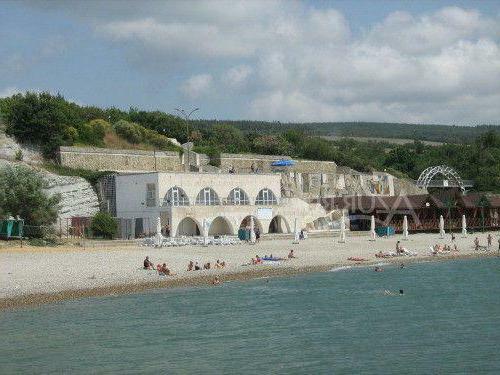 The bay of the village Divnomorskoe is very picturesque. In some places the majestic pine trees grow, which makes the air healthful. Own beach of the sanatorium "Fakel"( Divnomorskoe) is located on the outskirts of the village, so it's clean. Elite hulls for Gazprom employees stand almost on the shore( 50 m).From the tenth building to the beach, go up the steps of two hundred meters. Covering the shore - small and medium pebbles. The beach is equipped. There are sun beds, sunshades, shower and toilet, a bar in which discos are arranged in the evenings. The rescuers are on duty. If you go further away from Divnomorsky, you get to the nudist beach at the cape with pines. It's quiet and peaceful. At the sanatorium beach will be good for fans of outdoor activities. There they ride water-skiing, motor boats, bananas, kites. There are also beach volleyball courts. 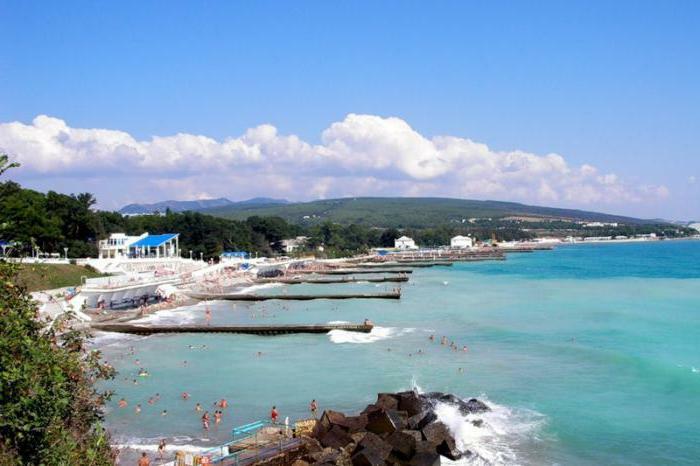 It is difficult to list all the services that the "Fakel" sanatorium( Divnomorskoe) provides to its guests. Photos that accompany the feedback of tourists show an excellent swimming pool, in which there is a children's pool, a gym, a billiard room, tennis courts. Parking, complains guests, paid. But the cost of living includes a full package of animation. Each tourist season recruited a team of sociable and fun guys who entertain guests of the sanatorium from morning to evening. There are paid entertainments on the territory of the complex. You can ride on one of the horse routes, visit the sauna with a solarium, beauty salon Nefertiti. There is a kiosk with a press in the sanatorium, a spa goods store and a pharmacy. In the evenings, you can visit a cinema hall or a disco. Immediately behind the gates of the sanatorium, near the "Vityaz" is a small market of vegetables and fruits. Nearby there is a store "Magnet", in which there is an ATM.

Tourists who visited the health resort, mostly were satisfied with the rest. The medical base of the sanatorium and the professional approach of doctors are impressive. Many reviews praise food. The choice of dishes is not as wide as in the resorts of Turkey, but everything is very tasty and, most importantly, from domestic products. Those tourists who visited the sanatorium with children assure that there are big discounts for young guests.