Respiratory system: structure of organs. The pleura is. .. Pleural cavity of the lungs

As you know, without air man can not do more than three minutes. On this, the oxygen reserves dissolved in the blood are depleted, and the fasting of the brain occurs, which manifests itself as a faint, and in severe cases - coma and even death. Of course, people trained in a certain way could extend the airless period to five, seven and even ten minutes, but this is hardly possible for an ordinary person. Exchange processes occurring in the body require a constant supply of oxygen molecules, and the respiratory system copes well with this task. 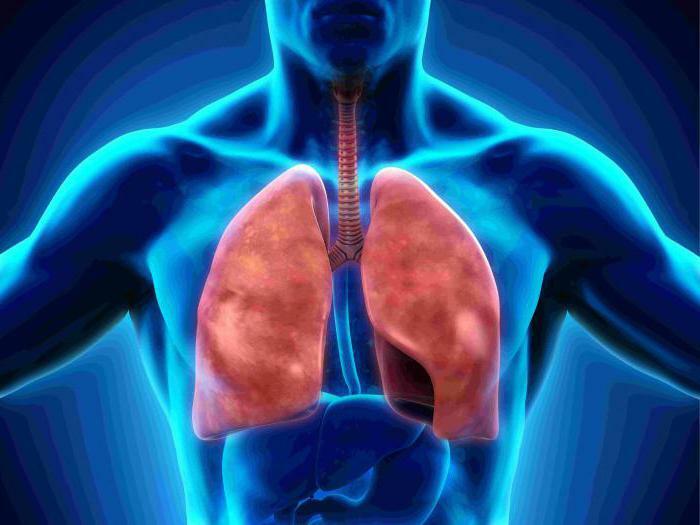 Oxygen exchange between the body and the environment takes place in four stages:

Note that in this process the respiratory system participates only at the initial stage, the rest depends on the nature of the blood flow, its properties and the level of tissue metabolism. In addition, the lungs participate in heat exchange, the removal of toxic substances, the formation of voice.

The entire respiratory system is divided into two sections, depending on the location of the organs.

The upper respiratory tract consists of the nasal and oral cavities, nasopharynx, oropharynx, throat and pharynx. And for the most part are cavities formed by the walls of the bones of the skull or the muscular-connective tissue framework.

The lower respiratory tract includes the larynx, trachea and bronchi. The alveoli are not included in this classification, since they are an integral part of the lung parenchyma and the terminal section of the bronchi simultaneously.

Briefly about each composite airway unit.

This is a bone-cartilaginous formation that is located on the face of the skull. Consists of two non-communicating cavities( right and left) and a partition between them, which forms a tortuous move. Inside the nasal cavity is covered with a mucous membrane, which has a large number of blood vessels. This feature helps warm the passing air during the inhalation process. And the presence of small cilia allows you to filter out large dust particles, pollen and other dirt. In addition, it is the nasal cavity that helps a person to distinguish smells.

Nasopharynx, oropharynx, yawn and pharynx serve to pass warm air into the larynx. The structure of the organs of the upper respiratory tract is closely connected with the anatomy of the skull and almost completely repeats its musculoskeletal framework.

The human voice forms directly in the larynx. It is there that the vocal cords are located, which vibrate during the passage of air through them. It's like strings, but because of the features of the structure( length, thickness), their capabilities are not limited to one tone. The sound of the voice is amplified by the proximity of the intracranial sinuses or cavities, which create a certain resonance. But the voice is not yet speech. Separate sounds are formed only if all components of the upper respiratory tract and nervous system work together. 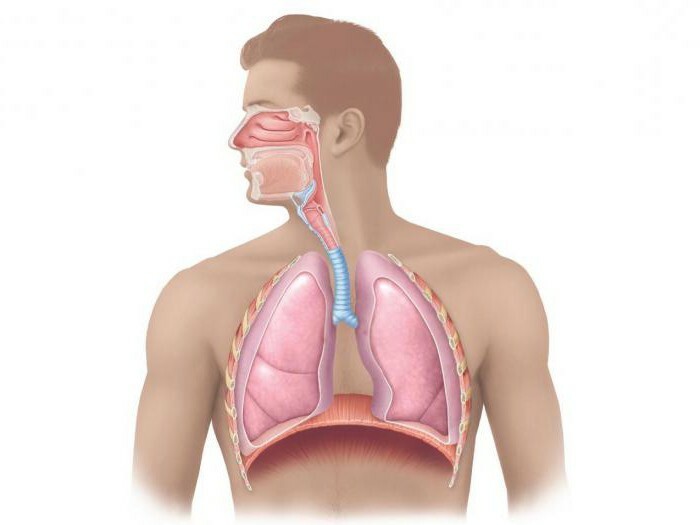 The trachea, or the windpipe, is a tube that consists of cartilage on one side and ligaments on the other. Its length is ten to fifteen centimeters. At the level of the fifth thoracic vertebra, it is divided into two main bronchi: the left and right. The structure of the lower respiratory tract is mainly represented by cartilages, which, when combined, form tubes that conduct air into the depth of the lung parenchyma.

Isolation of the respiratory system

The pleura is the outer thin shell of the lung, represented by a serous connective tissue. Outwardly, you can take it for a brilliant protective coating, and it's not so far from the truth. It covers the internal organs from all sides, and also is located on the inner surface of the chest. Anatomically, two parts of the pleura are distinguished: one actually covers the lungs, and the second lays the chest cavity from the inside. 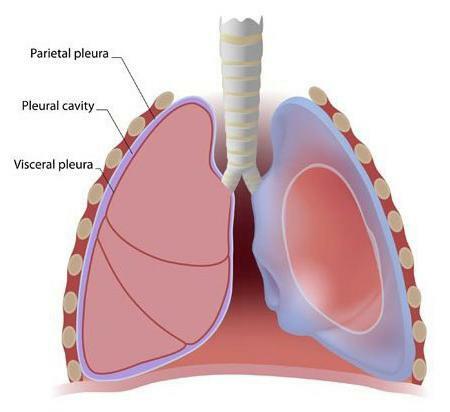 The part of the membrane that is located on top of the internal organs is called the visceral, or pulmonary pleura. It is tightly soldered to the parenchyma( the substance itself) of the lungs, and it can be separated only surgically. It is thanks to this close contact and the repetition of all the contours of the organ that it is possible to distinguish the furrows dividing the lung into lobes. These sites are called just the interlobar pleura. Passing along the entire surface of the lungs, the connective tissue surrounds the lung root to protect the vessels, nerves and the main bronchus that enter it, and then passes to the wall of the chest.

Beginning at the junction, the connective tissue sheet is called "parietal, or parietal pleura."This is due to the fact that its attachment will now not be to the parenchyma of the lung, but to the ribs, intercostal muscles, their fascia and diaphragm. An important feature is that throughout the entire period the serosa remains intact despite differences in topographical names. Anatomes for their own convenience distinguish rib, diaphragmatic and mediastinal divisions, and part of the pleura above the tip of the lung is called the dome.

There is a small gap( not more than seven tenths of a millimeter) between the two pleura sheets, this is the pleural cavity of the lungs. It is filled with a secret, which is produced directly by the serous membrane. Normally, a healthy person daily produces only a few milliliters of this substance. Pleural fluid is needed to alleviate the frictional force that occurs between the sheets of connective tissue during breathing. 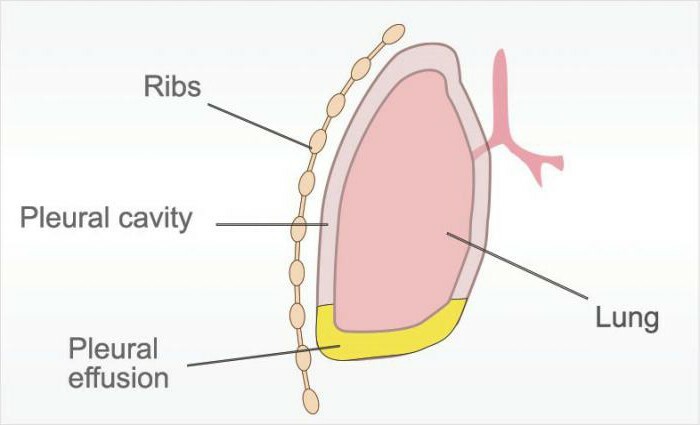 In general, pleural diseases are inflammatory. As a rule, it is rather a complication than an independent disease, as a rule, it is considered by doctors in conjunction with other clinical symptoms. Tuberculosis is the most common reason why the pleura inflames. This infectious disease is widespread among the population. In the classical version, primary infection occurs through the lungs. The structure of the respiratory organs causes the passage of inflammation and pathogen from the parenchyma to the serous membrane.

In addition to tuberculosis, the culprits of inflammation of the pleura may be tumor, autoimmune processes, allergic reactions, pneumonia caused by streptococci, staphylococci and pyogenic flora, trauma.

Pleurisy by nature are dry( fibrinous) and effusive( exudative).

In this case, the vascular network inside the connective tissue leaves swells, and a small amount of liquid will sweat out of it. It folds into the pleural cavity and forms dense masses that are deposited on the surface of the lungs. In severe cases of these raids so much that around the lung formed a solid shell, which prevents a person from breathing. Such a complication can not be corrected without surgical intervention.

If pleural fluid is produced in a significant amount, then it is said about exudative pleurisy. It, in turn, is divided into serous, hemorrhagic and purulent. It all depends on the nature of the fluid that is between the connective tissue sheets. 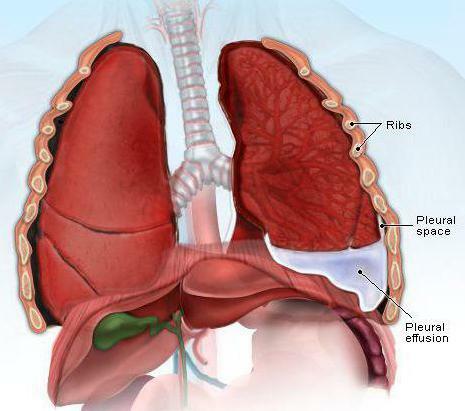 If the liquid is clear or slightly cloudy, yellow - this is a serous effusion. It contains a lot of protein and a small number of other cells. It can be so large that it will fill the entire chest cavity, compressing the respiratory system and hindering their work.

If the doctor saw during the diagnostic puncture that there is a red liquid in the chest, then this indicates that there is damage to the vessel. The reasons can be different: from the penetrating wound and closed fracture of the ribs with displacement of the fragments to melt the lung tissue of the tuberculous cavern.

The presence in the exudate of a large number of white blood cells makes it cloudy, with a yellowish-green hue. This is pus, which means that the patient has a bacterial infection with serious complications. Purulent pleurisy is otherwise called empyema. Sometimes, inflammatory fluid accumulations also complicate the cardiac muscle, causing pericarditis. 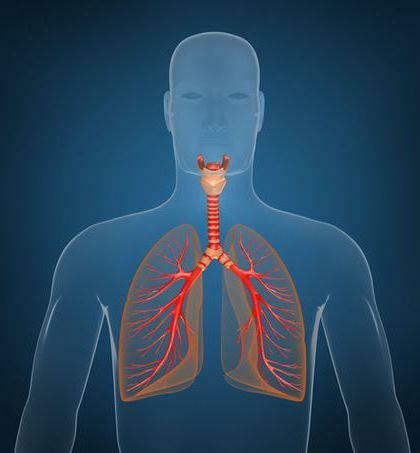 As we can see, the respiratory system consists not only of the lungs. It includes the nose and mouth, pharynx and larynx with ligaments, trachea, bronchi, lungs and, of course, pleura. This is a whole complex of organs, which works smoothly, delivering oxygen and other gases of atmospheric air into the body. In order to maintain this mechanism in order, it is necessary to regularly undergo fluorography, avoid acute respiratory infections and constantly improve their immunity. Then the negative impact of the environment will have less impact on the function of the respiratory system.