The human neck is the part of the body that connects the head and body. Its upper border begins at the edge of the lower jaw. In the trunk, the neck passes through the jugular notch of the sternum and passes through the upper surface of the clavicle. Despite its relatively small size, there are many important structures and organs that are separated by a connective tissue.

If the anatomy of the neck is generally the same for any person, then its shape may differ. Like any other organ or part of the body, it has its own personality. This is due to the peculiarities of the constitution of the body, age, sex, hereditary traits. Cylindrical form - a standard type of neck. In childhood and young age, the skin in this area is elastic, elastic, tightly clinging to cartilages and other protrusions. 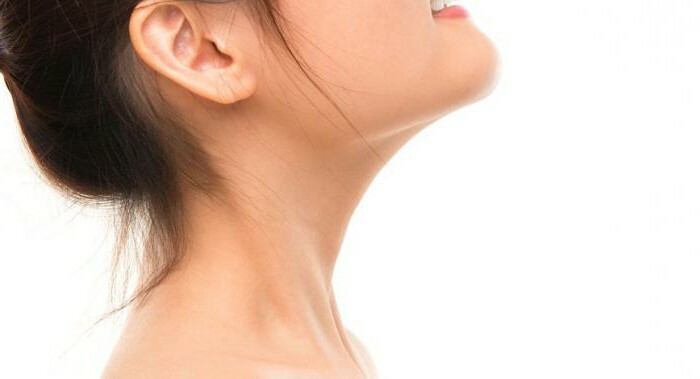 When the head is thrown back on the middle line of the neck, the horns and the body of the hyoid bone are clearly defined, the cartilage of the thyroid gland is cricoid, tracheal. Below to the torso a fossa is visible - this is the jugular cutting of the sternum. People of medium and lean physique on the sides of the neck can easily see the muscles. It is easy to notice and blood vessels located near the skin.

Anatomy of the neck

This part of the body contains within itself large vessels and nerves, it is the organs and bones important for the life of a person. A developed muscular system allows you to perform a variety of head movements. The internal structure of the neck consists of such departments as:

In addition, nerves, large vessels and veins pass through the neck area. It consists of vertebrae and cartilage, connective tissue and fat layer. This is the part of the body that is an important connecting link "head-neck", through which the dorsal and brain connect.

Allocate the anterior and posterior regions of the neck, as well as many "triangles" that are confined to the lateral edges of the trapezius muscles. The front part looks like a triangle with an upside-down base. It has limitations: from the top - the lower jaw, from the bottom - the jugular notch, along the sides - the edges of the sternocleidomastoid muscle. The middle line divides this part into two medial triangles: right and left. There is also a lingual triangle through which access to the lingual artery can be opened. It is bounded by the fore-part of the hyoid muscle, on the top - the hyoid nerve, behind and behind the tendon of the digastric muscle, next to which are the sleeping triangles.

The scapular and tracheal region is limited to the scapula and the sternocleidomastoid muscle. In the scapula-clavicular triangle, which is part of the paired lateral triangle, the jugular vein, the suprapatment vein and the artery, the thoracic and lymphatic duct are located. In the scapular-trapezoid part of the neck there is an additional nerve and a cervical superficial artery, and a transverse artery passes through the medial part of the neck.

The area of ​​the staircases is the interlacial and progenitoral spaces, inside which the artery subclavian and suprapular, the subclavian and the diaphragmatic nerve pass.

The posterior part is restricted by trapezius muscles. There are internal carotid artery and jugular vein, as well as wandering, sublingual, glossopharyngeal, additional nerves.

Bones of the neck

The vertebral column consists of 33-34 vertebrae, passing through the entire body of the person and supporting it. Inside is the spinal cord, which connects the periphery to the brain and provides the highest reflex activity. The first section of the spine is just inside the neck, due to which it has a high mobility. 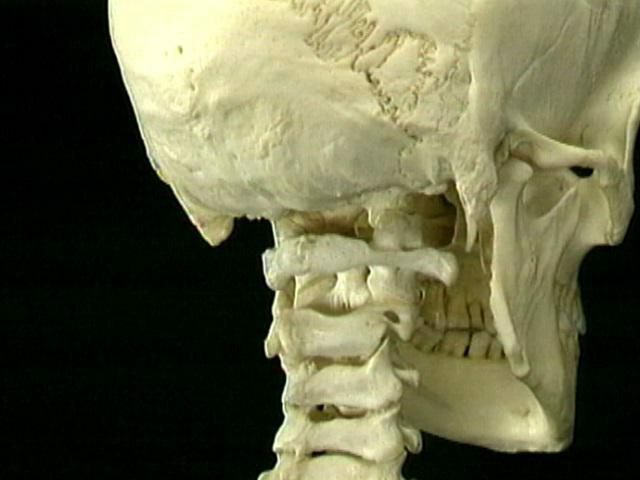 The cervical spine consists of 7 vertebrae, in some of them rudiments that are fused with transverse processes are preserved. Their front part, which is the boundary of the hole, is the rudiment of the rib. The body of the cervical vertebra is transversely stretched, smaller than its counterparts and has a saddle shape. This provides the neck section with the greatest mobility compared to other parts of the spinal column.

The vertebral apertures form a combined canal serving as a defense for the vertebral artery and vein. The place of passage of the spinal cord forms arcs of cervical vertebrae, it is wide enough and resembles a triangular shape. The spinous processes are bifurcated, due to which a lot of muscle fibers are attached here.

The first two cervical vertebrae are structurally different from the other five. It is their presence that allows a person to make various head movements: slopes, turns, rotation. The first vertebra is a ring of bone tissue. It consists of anterior arch, on the convex part of which the anterior tubercle is located. On the inner side, the articular fossa differs for the second tooth-like process of the cervical vertebra. 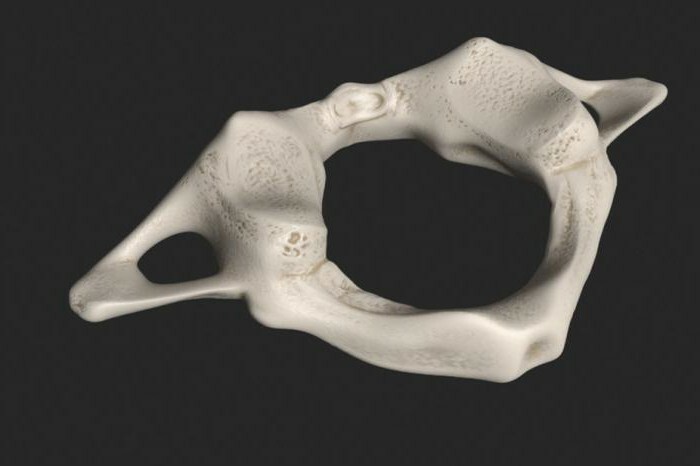 The second cervical vertebra - axis, or epistrophe, - is distinguished by a developed tooth-shaped process located in the upper part of its body. On each side of the appendages are articular surfaces slightly convex. 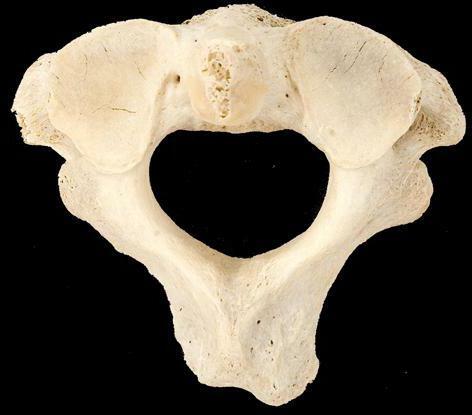 These two vertebrae, which are specific in structure, are the basis of neck mobility. Axis thus plays the role of the axis of rotation, and the atlas turns together with the skull.

Muscles of the cervical department

Despite the fairly small size, the human neck is rich in muscles of various kinds. Here the surface, middle, lateral deep muscles, and also the medial group are concentrated. Their main purpose in this area is to hold their heads, to ensure conversational speech and swallowing.

Muscles allow you to hold your head, perform movements, reproduce speech, swallow andyshat. Their development prevents osteochondrosis of the cervical region and improves blood flow to the brain.

Fascia of the neck

Due to the variety of organs passing through this area, the anatomy of the neck suggests the presence of a connective membrane that limits and protects the organs, vessels, nerves and bones. It is an element of the "soft" skeleton that performs trophic and supporting functions. The fascia fuses with the numerous veins of the neck, preventing them from intertwining with each other, which would threaten a person with a violation of the venous outflow.

Their structure is so complicated that the anatomy is described differently by the authors. Consider one of the generally accepted classifications, according to which the connecting shells are divided into fascia:

Fascia divide and protect all areas of the neck, thus preventing the "confusion" of vessels, nerve endings and muscles.

Neck vessels provide an outflow of venous blood from the head and neck. They are represented by the external and internal jugular vein. Blood in the outer vessel comes from the nape of the ear, the skin above the scapula and the front of the neck. A little before the collarbone, it connects with the subclavian and internal jugular vein. The latter eventually grows into the first at the base of the neck and divides into two brachiocephalic veins: the right and left. 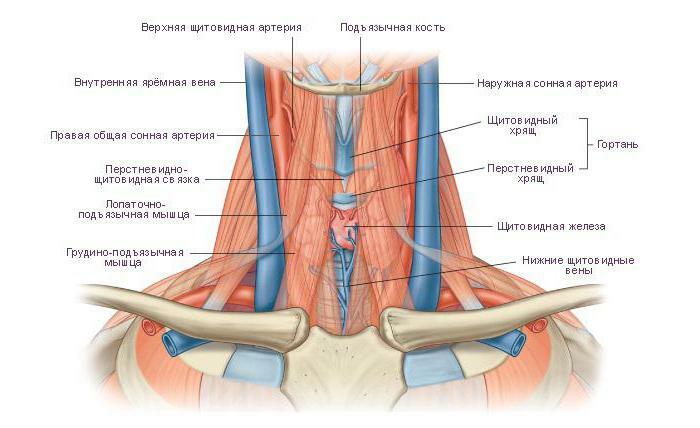 Neck vessels, and especially the internal jugular vein, play an important role in the processes of hematopoiesis. It originates at the base of the skull and serves to drain blood from all the vessels of the brain. Its inflows in the neck are also: the upper thyroid, the lingual facial, the superficial temporal, the occipital vein. A carotid artery passes through the neck region, which does not have branches in this area.

Nervous plexus of the neck

Nerves of the neck are diaphragmatic, cutaneous and muscular structures that are located at the level of the first four cervical vertebrae. They form plexuses that originate in the cervical spinal nerves. The muscular group of nerves innervates nearby muscles. The neck and shoulders are driven by impulses. The diaphragmatic nerve affects the movements of the diaphragm, pericardial fibers and pleura. Skin branches give rise to the ear, occipital, transverse and supraclavicular nerves.

Anatomy of the neck also includes part of the body's lymphatic system. In this area it is composed of deep and superficial nodes. The anterior ones are located near the jugular vein on the superficial fascia. Deep lymph nodes of the anterior part of the neck are located near the organs from which lymph drainage proceeds, and have the same names with them( thyroid, pre-horten, etc.).The lateral group of nodes is constituted by the perforated, jugular and supraclavicular, next to which is the internal jugular vein. In the deep lymph nodes of the neck, there is an outflow of lymph from the mouth, middle ear and pharynx, and also the nasal cavity. The fluid first passes through the occipital nodes.

The structure of the neck is complex and up to every millimeter is thought out by nature. A set of plexuses of nerves and blood vessels connects the work of the brain and periphery. In one small part of the human body, all possible elements of systems and organs are located at once: nerves, muscles, vessels, lymphatic ducts and nodes, glands, spinal cord, the most "mobile" department of the spine.