Edema of the Quincke. First aid for an immediate allergic reaction.

Allergy is not a harmless disease. Sometimes the reaction proceeds so quickly that the outcome becomes lethal. For example, if there is a swelling of the Quincke, first aid may be late. 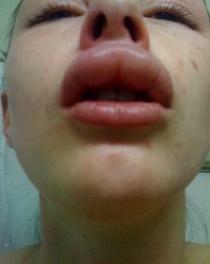 Even if the doctors arrive in time, the consequences for the patient can be very, very serious. Allergy happens most often for absolutely unexpected reasons, in an absolutely unpredictable place and at the most inconvenient time. The fault is also medicines, and household chemicals, and food, and insect bites, and even just the smell of perfume in a crowded train when it's impossible to get out or push into another car. A person suddenly begins to sneeze, cough, lose his voice. And the worst thing is that it begins to swell quickly! This is the angioedema of Quincke. First aid should be received immediately. The bill is for minutes.

Symptoms The body's extraordinary response to an alien invasion is immediate. Swelling of the Quincke spreads instantly. It is formed either under the skin, or - which is the most terrible - on the mucous membranes. Language, throat, trachea, bronchi, lungs are subject to this lesion. The patient suffers from shortness of breath, he does not have enough air, he breathes with hissing and barking cough. Without timely assistance, the air in the lungs ceases to flow due to the laryngeal edema, and the patient dies. Moreover, an allergic can die from anaphylactic shock, which also happens often enough, and this is the most severe of immediate allergic reactions. 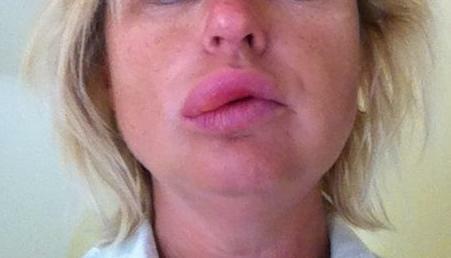 It is necessary to disseminate as widely as possible knowledge about what is Quincke's edema. First aid before emergency medical intervention should be provided correctly. Most importantly, do not forget that in menacing cases with laryngeal edema and asphyxia( lack of air) you need to act quickly.

First of all, you need to call an ambulance. Patient calm, open the windows to access fresh air, eliminate the same medicine, food or smell, that is, exclude the presence of an allergen. All the tightening details of the patient's clothes are removed: ties, scarves, belts and so on. If there is a possibility, you need to make a cold compress on an edematous place and drip into your nose, for example, "Naphtizin". 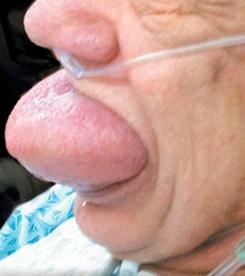 He will narrow the vessels, which will help to resist the intensity of edema. It is very good to immediately take an antihistamine such as "Suprastin".Further fight for the life of the patient will already be doctors: with difficulty in breathing, glucocorticoid hormones will be introduced and taken to a hospital clinic where there is a specialized department and doctors( ENT).Patients after the end of treatment should adhere to a special hypoallergenic diet. From the diet excluded citrus, chocolate, eggs, milk, fish, wheat, tomatoes, nuts and much more. Then the doctor prescribes medicines. Most often these are drugs to enhance the production of the organism C1 inhibitor, because it is due to its deficiency occurs angioedema. Photos show this disease at different stages. It is almost impossible to prevent a reaction. Knowing the reason for the onset of Quincke's edema, first aid is not needed, because they can avoid taking "wrong" food or allergy-causing medications. The main danger is just ignorance of allergens.