"Masha and the Bear": vitamin of growth as an indicator of disobedience

Over the past eight years, there are very few spectators, not only kids, but also adults who would not have seen at least one series of the modern cartoon "Masha and the Bear"."Vitamin Growth" is the thirtieth story of the adventures of a rebellious girl and her furry friend.

The main characters of the cartoon

In general, it's no secret for the fans of this cartoon that Mishka here is the embodiment of loving and caring parents. Masha is a collective image of girls and boys, who do not always represent an example of obedience. For several dozen episodes, you can see what a little shalunich does with a huge supply of inexhaustible energy. And how Mishka is trying to fix everything she finds out again.

What will happen in this series? What will surprise the audience again Masha and the Bear?"Vitamin Growth" - this is another adventure of the heroes, in which they with honor will come out of the current situation.

Masha in each series of this cartoon - a very restless and playful girl, who constantly finds herself in curious situations. She is very persistent and inquisitive. Likes to play with award-winning Bears. At the same time, the girl is very kind, capable of helping someone who needs it. What a delicious jam she made in one of the series, when she messed up all that Mishka had prepared before that! 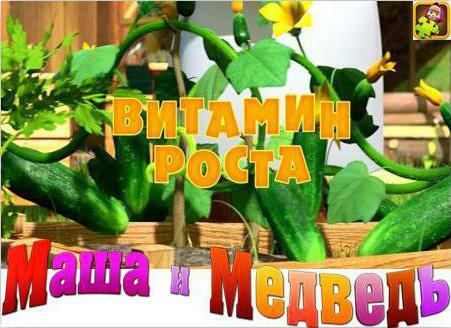 Bear is a very kind bear. He likes a quiet life, which ended immediately after meeting Masha. But even without a girl he can not, he is bored, he has already got used to taking care of her. He is very clean and neat, likes to collect puzzles, eat honey and watch football matches.

These are they, Misha and Masha. Vitamin rose another test for the wise Bear and an instructive lesson for the girl.

What happened to the flowers?

At the very beginning of the story, Mishka really wants to appear in all its glory before the Bear. And all because of the fact that he really likes him. And this pair of cute bears was walking in front of Mishka's house, when they suddenly noticed that the tulips growing in the front garden were of a tiny size and quite sluggish. Mishka is very upset by this circumstance. After all, he is very anxious about everything that he planted or sowed. So he hurried home, to his laboratory, and began to devise how to create a vitamin of growth in order for the flowers to grow tall and strong. 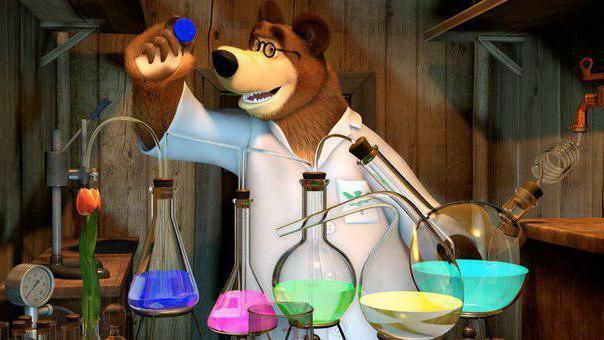 He spends a lot of time on his flasks, mixing various substances in test tubes. Perhaps he would have managed to do everything, but. ..

These are the events that take place in the cartoon "Masha and the Bear".Vitamin of growth, invented by Mishka, not only helped to try to save the tulips, but also introduced some educational element into communication with the girl. After all, when Mishka was working on his invention, Masha came to visit him. Yes, not alone, but together with the pig, which plays the role of her child and which the girl rolls in a pram. To begin with, Masha fed Piglet with products from someone else's fridge, and then measured it. So the girl was able to see that her child grew a little. Masha herself did not notice any changes in her growth. But she wants to grow up so much!

What happens when not listening to adults

Mishka did not allow Masha to go into his laboratory, but the girl, as always, did not listen. She likes to not just watch, but also to experiment. Not only went there, but also shed a growth vitamin, invented by Mishka. Her hairy friend turned out to be very talented, so the girl immediately grew up, flooding herself with the whole house of Mishka. And at this time the Bear passed along with the Himalayan bear. When he sees Masha, he begins to laugh very loudly over her. The girl got angry, easily lifted him by the scruff and threw it into the forest. Dipper at the same time lost consciousness. 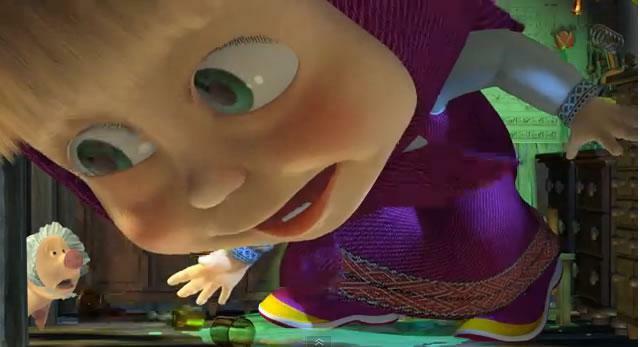 Here in this situation are Masha and the Bear. The vitamin of growth has appeared too strong, therefore now Мишке it is necessary to think out urgently one more vitamin which could return to the girl its former sizes.

After Bear tested a new solution on the tulip, he passed it to Masha. The girl, having drunk it, at first very much decreased, then suddenly grew to cosmic dimensions. And only after that it regained its former growth. Only now the girl realized that being so small is not bad at all.