Demographic urticaria( so often mistakenly called dermographic urticaria) is considered one of the common pathologies, which is diagnosed in 5% of the world's population. The disease manifests itself by the appearance of a rash on the skin. In this case, itching, characteristic of other forms of the disease, is absent or weakly expressed. From our article you will learn the main causes of the appearance of the disorder, as well as the methods of its treatment offered by modern medicine.

Urticaria is a skin disease in which, due to the action of a particular agent, an allergic reaction occurs. It manifests itself in the form of redness and swelling of individual parts of the epidermis. A little bit later, blisters with the size from 1 mm to 5-7 cm form in this place. The foci of the pathological process are very similar to the burns from the nettle. This disease can occur in both adults and children. 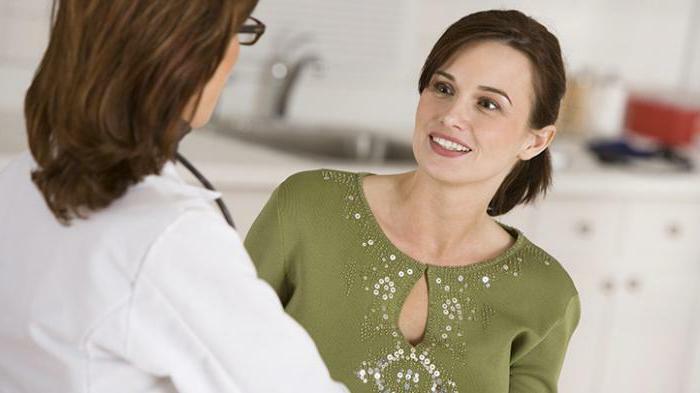 Demographic urticaria, more precisely, dermographic, is considered not very common pathology of skin. At the site of the allergic reaction, there is never inflammation. The disease is not accompanied by headaches or loss of consciousness. Usually, his symptoms go away in a few hours, so many people do not rush to get help from a doctor. In fact, the doctor's consultation will not be superfluous. He will be able to determine the etiology of the disease, and in his severe forms will appoint the right treatment.

The main causes of skin disorders

The appearance of rashes on the skin is most often due to various mechanical effects. These include insect bites, combing and rubbing, rubbing clothes. Demographic urticaria also does not bypass the small children. In them, the reaction of the epidermis can be the result of moving games, during which they receive scratches and bruises. 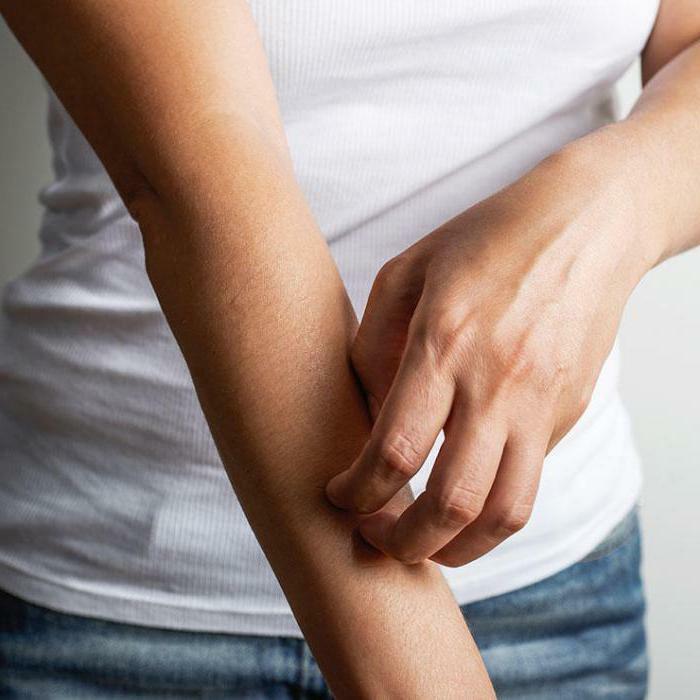 It was not possible to establish the exact causes of the development of the disease. However, physicians identify a whole group of factors contributing to the occurrence of the disease:

Often the pathological process is accompanied by diseases that significantly weaken the body's immune forces.

What are the symptoms of demographic urticaria? The disease does not affect the general well-being of a person. It is not characteristic of the symptoms that occur with standard allergic reactions. These include tearing, nasal congestion, sneezing, shortness of breath.

Both in adults and in children with demographic urticaria, there are similar symptoms. First, traces appear on the site of skin contact with the stimulus. It can be stripes or other shapes. In its form, the traces accurately reproduce the pattern, which remained on the skin after the action of the agent-stimulus. 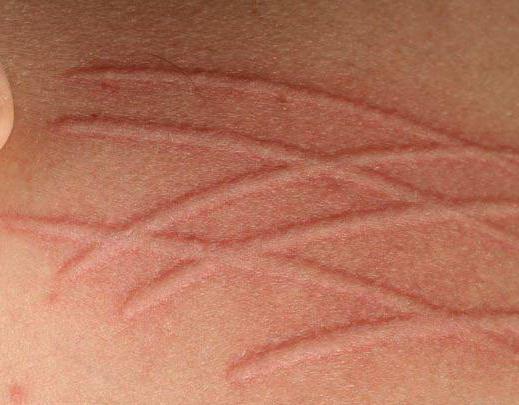 After a while, the damaged area acquires a characteristic puffiness. Stripes or other marks first blush, then swell and begin to rise above the surface of the skin. Sometimes there are scars or blisters. These symptoms can persist for several hours.

When should I see a doctor?

If you suspect a demographic urticaria, you can first carry out a simple test at home. To do this, in the forearm area, you need to scratch a well-ground pencil mesh. In a few minutes at this place, first appear white stripes, and then pink traces. They can slightly rise above the surface of the skin. Normally, such traces disappear after about an hour. In addition, the strips should not itch or hurt. This simple test allows you to determine if you have a demographic urticaria. The photo of the results of the procedure itself is presented just above. 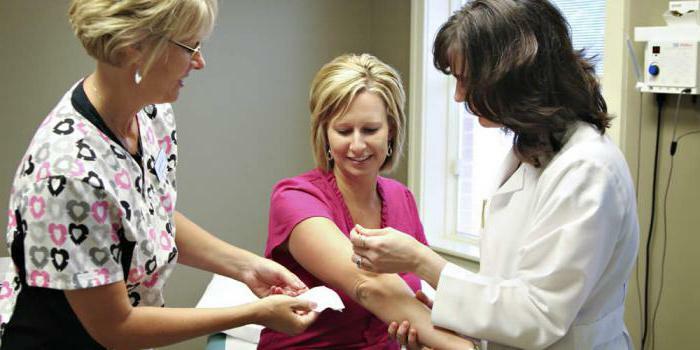 After diagnosis at home, you must visit a dermatologist. The detection of the disease usually does not cause difficulties. To confirm the final diagnosis, it is enough for the doctor to examine the patient's epidermis and make several skin tests. Sometimes it is necessary to consult outside specialists. For example, the parasitologist helps to identify the presence of pathogenic flora, and the endocrinologist assesses the thyroid function.

As mentioned above, specific treatment with this disease is extremely rare. Usually the symptoms disappear on their own within a few hours or days. However, many patients still get aesthetic discomfort. Therefore, they are interested in the question, than treating the demographic urticaria.

Therapy should be started with the first-generation antihistamines. These include the following medicines: Zirtek, Tavegil, Claritin, Cetirizin. They relieve the symptoms of the pathological process, and noticeable relief comes in 2-3 hours. Therapy is usually reduced to a single pill before bedtime.

If for any reason the patient refuses to take the pills, you can replace them with ointments. For example, the gel "Fenistil" perfectly removes itching and inflammation."Drapolen Cream" effectively fights with scars and small scars, characteristic for such pathology as demographic urticaria.

It is recommended to treat chronic form of the disease with antihistamines of the second generation. These are such drugs as "Tagamet", "Zantak" and "Bricanil".When the listed medicines do not give a positive result, the purpose of oral steroids and physiotherapy is considered appropriate.

It should be noted that only a doctor can choose specific medications for treatment. Self-management often ends in a lamentable result.

The mild form of the disease often does not require specific therapy. To eliminate unwanted symptoms, you can use the prescriptions of folk healers.

Especially effective is the decoction of the broth. It should be brewed like tea and consumed throughout the day in small portions. Celery juice is no less useful. Every day you should drink 1/3 cup of delicious medicine. Also in this juice you can moisten the cotton wool disc and treat them with the affected places. Demographic urticaria belongs to the category of curable diseases. After the start of therapy, noticeable improvements occur the next day. The mild form of the disease completely passes within three days.8% of patients may have a complicated course of the pathological process. In this case, doctors diagnose "chronic demographic urticaria."The reasons for its occurrence are most often due to strong stress and psycho-emotional overload.

Specific preventive measures for the disease have not been developed, since the exact reasons for its occurrence remain unknown. To prevent skin allergic reactions, doctors recommend adhering to the following rules:

Remember that with timely access to a doctor, any disease is easier to cure. Be healthy!