Every woman wants to know the joy of motherhood. It is a natural impulse associated with the very essence of human nature. However, many are not ready for the fact that they will have to visit the doctor regularly and tolerate some not very pleasant manipulations. But in order for pregnancy to pass smoothly and calmly, it is better to follow the instructions of specialists than to rely on luck. 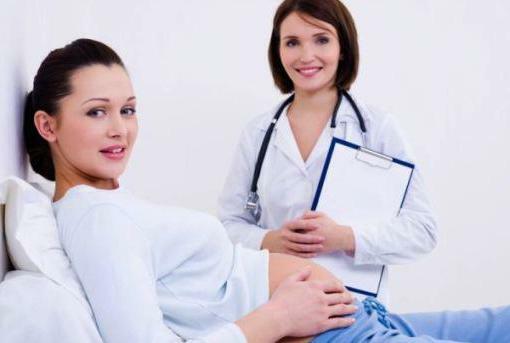 Survey Before you come to the antenatal clinic to be registered for pregnancy or just for a routine checkup, the fair sex representative needs to tidy herself up. No special effort is required, but still it is recommended to take a shower. In no case should not douche or something like that, because the overall picture of the disease( if it is), will be smeared and the doctor will not find anything. It will not be superfluous and fresh clean linen and sanitary towel( if necessary). 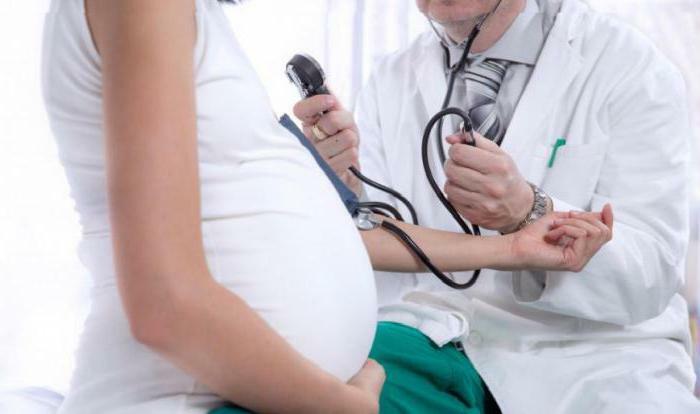 As with any other doctor, the obstetrician-gynecologist has a standard form for acquaintance with the patient's history. It includes passport data, complaints, records of the place of residence and work, the presence of hereditary diseases and transferred infections.

The special anamnesis is focused on that the doctor has understood an essence of a problem with which the woman has addressed. It includes questions about menstruation, sexual activity, pregnancy and abortion. In addition, brief information is required about the partner's wife or partner, as well as his and her childbearing function.

Then they begin the examination for the current pregnancy. Establish a gestation period, determine the size of the pelvis and the position of the child in the uterus. 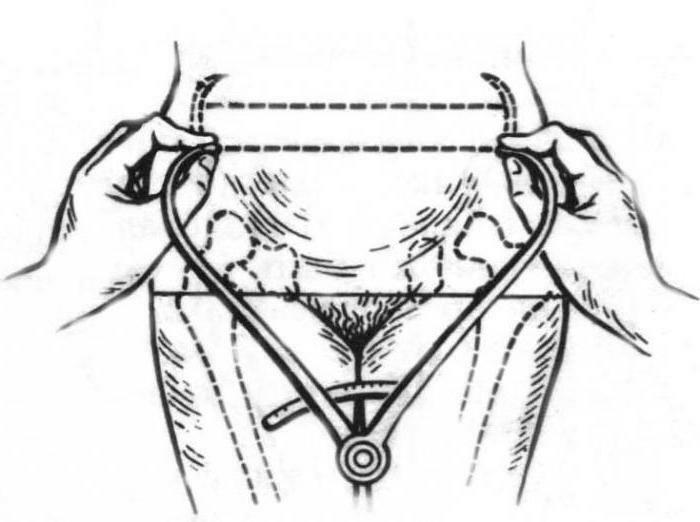 There are several ways to calculate the gestational age and the date of onset of labor. The first one is a calendar one. It's the easiest. It is necessary to recall the number of the first day of the last monthly period and add to it 280 +/- 7 days or 10 lunar months. So you can find out the approximate day of a happy event. If a woman can remember the date of conception, then you need to add again all the same 40 weeks and get the answer to an exciting question.

Another method is based on ultrasound. The doctor-diagnostician by indirect signs can determine the gestational age of the fetus and make an approximate date of delivery. At obstetric research on height of an arrangement of a bottom of a uterus also the gestational age is calculated. From 12 to 38 weeks, the height of the uterus in centimeters corresponds to the week of pregnancy. You can also focus on the first stirring of the fetus. In primiparas, it is felt from the eighteenth week, and in the re-occurring ones it is felt with the sixteenth.

Dimensions of the large pelvis 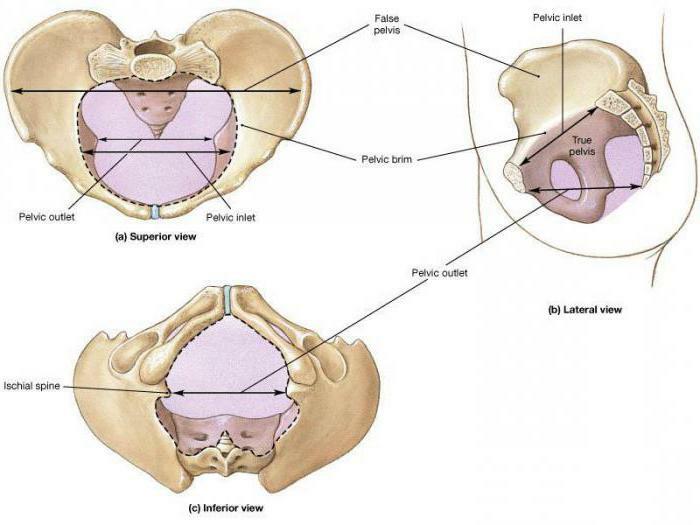 For a doctor, knowing about the size of a woman's pelvis is important, and the data are important both during fetal development and during labor. The size of the large pelvis includes the outer conjugate and three distances corresponding to the protruding parts of the pelvic and femur bones.

1. Distantia spinarum is the interval between the most elevated points of the iliac spine. It is about twenty-six centimeters.

2. Distantia cristarum is the space between the crests of the iliac bones, and it is approximately twenty-eight centimeters.

3. Distantia trochanterica - the distance between large spits located on the femur is 31-32 centimeters, respectively.

The outer conjugate has a slightly different size. If the three previous ones were located in the frontal plane, then this one is in the sagittal plane. The outer conjugate is the distance between the protruding process of the fifth lumbar vertebra and the upper tip of the pubic symphysis. Some measurements are needed to measure it. The definition of an external conjugate begins with the fact that the patient is placed on her side. The leg that lies on the couch, the woman leads to the stomach, and overlying - pulls. Branches of the tazomer are raised and placed above the pubic articulation and supracranial fossa so that they are practically parallel. This is the outer conjugate. The measurement depends on the constitution of the woman and the thickness of her bones. The thicker they are, the greater the error in the calculation. The size of the outer conjugate is about twenty centimeters. Its calculation is necessary to determine the true conjugate. On average, the difference between them corresponds to 9 centimeters. For example, if the outer conjugate is equal to twenty centimeters, then the true one will be 11 cm.

Dimensions of the small pelvis 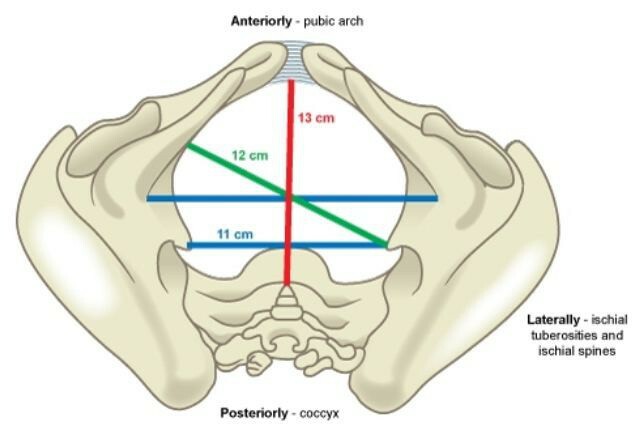 There is such a thing as a narrowed pelvis. It can be narrowed clinically or anatomically. In order to determine the anatomical parameters of the bone ring, measurements of the small pelvis are made.

The outer conjugate has a certain relationship to the Michaelis rum, as it also shows the dimensions of the pelvis. This area is formed by the posterior surface of the sacrum. Boundaries of it:
- spinous process of the fifth lumbar vertebra;
- paired posterior superiority of the iliac bones;
- the tip of the sacrum.

The size is normally 11 by 11 centimeters. The outer conjugate has an upper point in common with the rhombus. 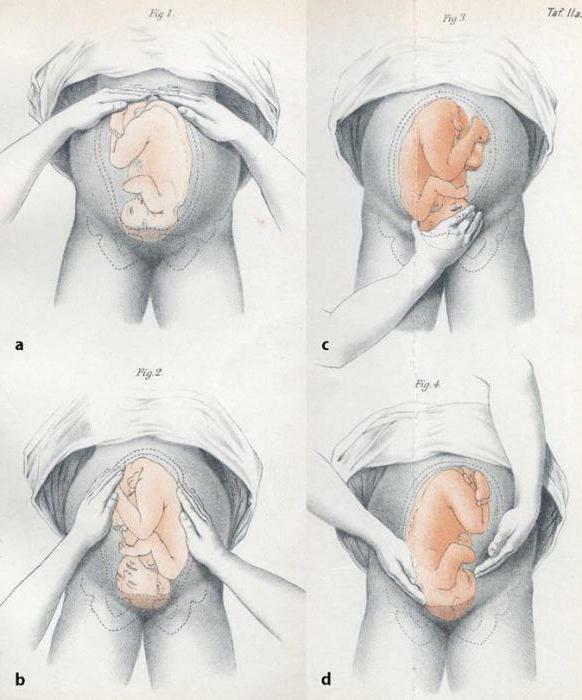 After the twentieth week, an obstetrician-gynecologist can feel by touch the head, back and limbs of a child in the womb. For this, methods of external obstetric research are used.

The first method: the doctor determines the height of the bottom of the uterus and the part of the fetal body that is to it. For this, the doctor puts his hands on the upper abdomen and probes it.

The second method determines the position and type of the child. To do this, the obstetrician slowly drops his hands from the top of his stomach, spreading them to the sides. Pressing on the side surfaces of the uterus, fingers and palm, the doctor feels the back or small parts of the fetal body, thus determining the child's position.

The third technique is necessary to determine the underlying part, that is, the part of the trunk that is located above the pubic articulation. He also can determine the mobility of the head.

The fourth reception is complemented by the third. It allows not only to identify the underlying part, but also to understand how it is located in relation to the entrance to the small pelvis. For this, the doctor becomes the back to the patient and has hands in such a way that the fingers converge over the pubic symphysis.

The type and position of the fetus in the uterus 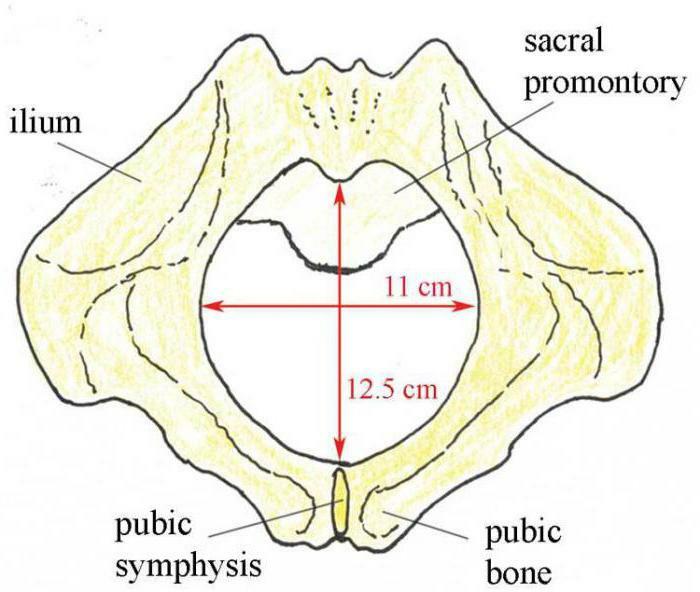 With external obstetric examination, Leopold-Levitsky's methods give the doctor the opportunity to determine the location of the fetus and to predict the course of labor.

Internal obstetric examination can be performed with two or four fingers or with the whole arm. To the touch, the doctor can determine the degree of cervical dilatation, reveal the present part, the integrity of the fetal bladder, the condition of the birth canal. In addition, this method fixes the dynamics of the child's progress through the birth canal.

However, this is quite a serious intervention, and it is necessary to perform the procedure strictly according to the rules: when entering a hospital, and then no more often than once every two hours. The less often, the better.

The study begins with examination of the external genitalia and perineum. Then the fingers are inserted into the vagina and its length, width, elasticity of the wall, presence of scars, adhesions or strictures that can interfere with the normal course of labor are determined. After that, move on to the cervix. It is examined for maturity, shape, size and consistency, shortening and softening. If a woman comes in childbirth, then the opening of the neck measures the patency of the fingers. In addition, the doctor tries to find the present part and determine the position of the head in order to prepare for possible complications.

Determining the position of the child's head

There are three degrees of extension of the head as it passes through the birth canal.

The first degree( anterolateral insertion) means that the head will pass through the pelvis by its direct size. It is 12 cm. This means that the cervix and vagina should stretch to the given value.

The second degree( frontal insertion) corresponds to a large oblique size( 13-13.5 cm).This will be the largest part that must pass through the birth canal.

The third degree( facial insertion) tells the obstetrician that the baby is moving through the small pelvis with the face forward, which means that the largest head size will be 9.5 cm.