Anemia is a common disease among people of different ages, social groups, and sexes. Increased fatigue, lethargy, drowsiness can talk about hemoglobin deficiency in the blood. Cope with the problem and take preventive measures can be using special drugs, such as "Sorbifer Durules".Cheap analogs of the medicine do not cope better with the elimination of the disease and its symptoms.

The medical name "Sorbifer Durules" displays a combination of substances of its composition. Anemia is caused, as a rule, by a lack of iron in the body. The drug replenishes its deficiency, and ascorbic acid improves the absorption of the substance in the digestive system.

Durules is the name of a unique technology used in creating a medicine. In this case, the intake of iron ions occurs gradually, which allows the drug to be better absorbed. Due to this, there is no irritation of the mucous membrane and there is no aggressive effect on the digestive organs. No analogue of "Sorbifer Durules" can boast of such a delicate effect. 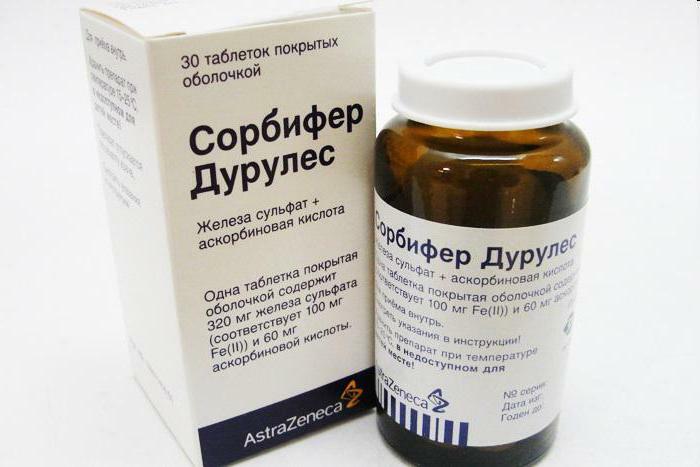 The drug "Sorbifer Durules" can be used for both therapy and prevention. Usually it is prescribed in the following cases:

Purchase of the drug is not problematic, many pharmacies sell "Sorbifer Durules".Analogues in Russia in terms of composition and action are also common and available to consumers.

Close analogue of "Sorbifer of Durules" similar to active substances. The main purpose is the prevention and treatment of anemia caused by lack of iron. In cases of low hemoglobin for other reasons, the drug is ineffective.

It is allowed for children from four years( unlike "Sorbifer"), therefore it is recommended in the period of active growth of a young organism. Helps to recover after the diseases, takes part in the recovery of intestinal microflora. Also discharged to pregnant and lactating women with high blood loss.

The drug is considered effective, rarely provokes side effects, has few contraindications. In the treatment is not recommended the use of other medicinal iron sources. Otherwise, the probability of an excess of the substance in the body is high.

Analog "Sorbifer Durules", containing iron and vitamin complex. Due to the presence of the drug in the capsules, the substances slowly enter the body, reducing the likelihood of side effects in the form of violations of the digestive tract.

Contains ascorbic acid, B vitamins, calcium pantothenate, thiamine and other active ingredients. The drug not only eliminates the cause of anemia, but also restores the disturbed metabolism, which almost always accompanies the lack of iron in the body.

Indications: Pregnancy and preparation for it, lactation, prolonged blood loss associated with the menstrual cycle or childbirth, lack of vitamin B and iron. It is not recommended for children and people suffering from diseases associated with a deficiency or excess of active substances of the drug. 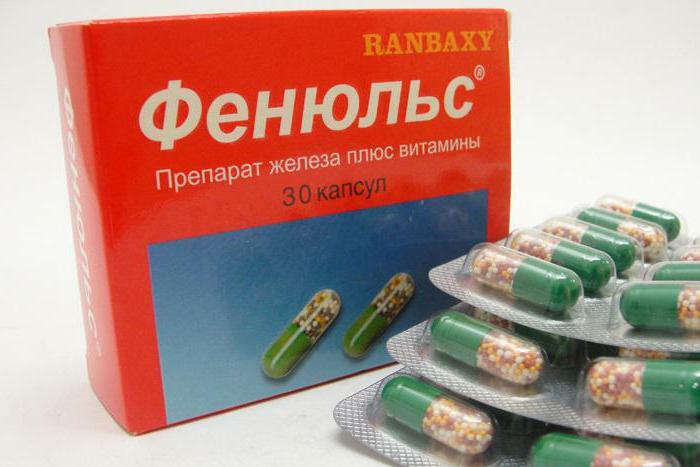 German analogue of "Sorbifer Durules", containing iron, vitamin C. The composition of the drug includes amino acids that contribute to more efficient absorption of the active substance and its entry into the blood.

Drug shortens the iron deficiency, which leads to a reduction and subsequent elimination of anemia satellites: dry skin, fatigue drowsiness, lethargy. Available in the form of capsules, drops and syrup. Has a lot of contraindications and side effects, which are rarely manifested. Nevertheless, "Aktiferrin compositum" is allowed for children and even newborns.

The following are the indications for taking medication:

The drug has limitations in sharing with other medicines and certain foods, which should be learned in advance. 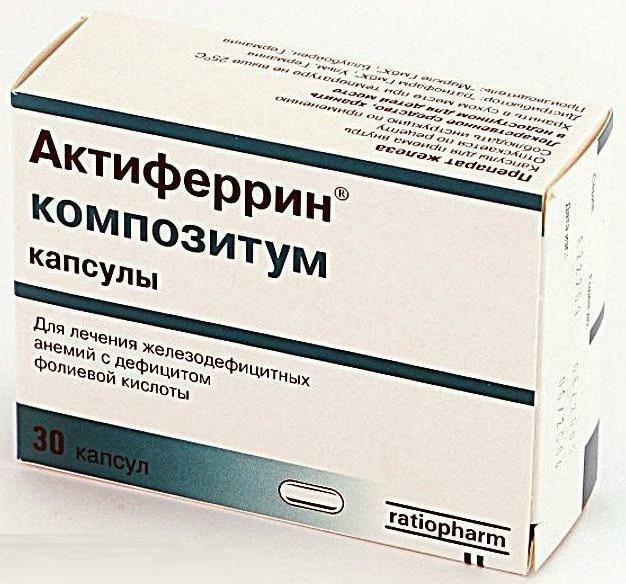 A medicine with anti-anemic effect. Replenishes the lack of iron. Additionally contains folic acid, which is necessary for the proper development of the fetus during pregnancy. Produced in the form of chewable tablets.

It is recommended both for the prevention of anemia caused by iron deficiency, and for its treatment. It is issued to pregnant women( second, third trimester) and during lactation. Contraindicated in children under 12 years of age, with reduced hemoglobin, which has arisen for another reason, with personal intolerance of the components.

Treatment with "Biofer" is performed strictly under the supervision of a physician with regular delivery of laboratory tests to the level of hemoglobin in the blood. The recommended course is one and a half or two months. The drug is considered high-quality and effective, has few side effects and restrictions for admission. Like any other means containing complexes of vitamins or substances, this medicine should not be combined with others. 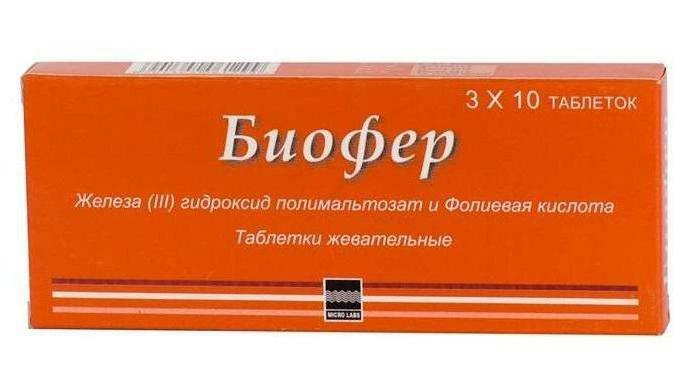 Russian analogue."Sorbifer Durules" is significantly different from its composition, but both drugs have a similar effect on the body."Vitatress" is a multivitamin complex with iron content. It is well absorbed by the body, has practically no contraindications( except for children, hypersensitivity to components), side effects are only possible allergic reactions.

It is recommended in the following cases: 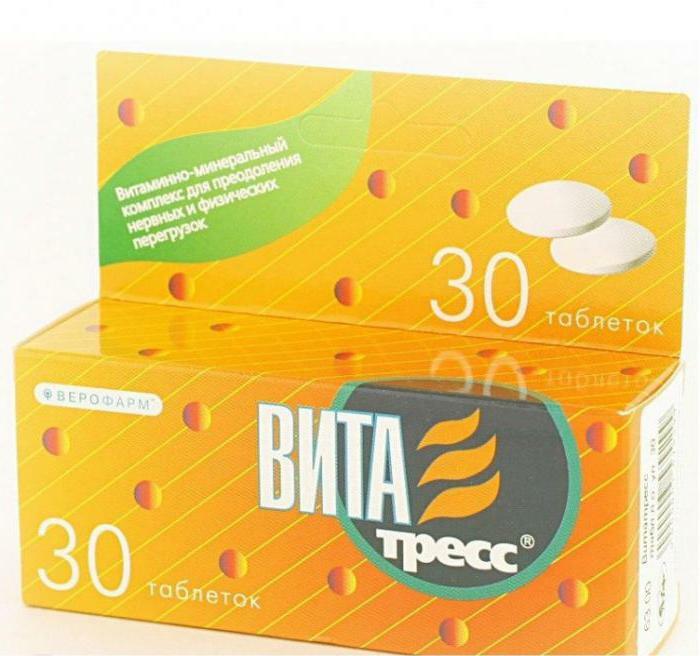 Delicious treat containing a multivitamin complex and a high level of iron. Completely soluble in the digestive tract, easily digested. It consists of processed cattle blood with the addition of food elements that improve its taste: chocolate, honey, ascorbic acid, coconut and others.

Hematogen can be taken for prophylaxis, or for the treatment of vitamin deficiency or anemia, like Sorbifer Durules. Analog cheaper drug - one tile costs only a few tens of rubles. There are practically no side effects, the effect on the body is mild and delicate.

Despite its availability and seemingly harmless, the delicacy has its limitations to the application. It is contraindicated in persons suffering from obesity, with diabetes and pregnant, prone to excessive weight gain. For the therapeutic effect, it is necessary to observe the recommended portion of the tile - 30 g for children from 6 years( younger should not be), 50 g for adults. 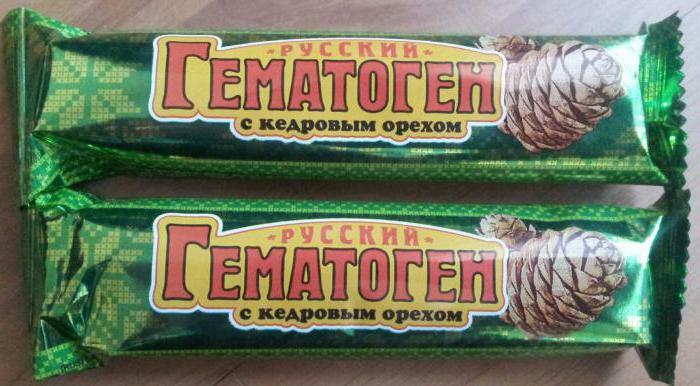 It should be remembered that anemia is diagnosed not by symptoms, but by laboratory tests. Before making a decision to take medications, you should consult a doctor, regardless of the purpose of the course - preventive or curative.