What is mucociliary clearance? 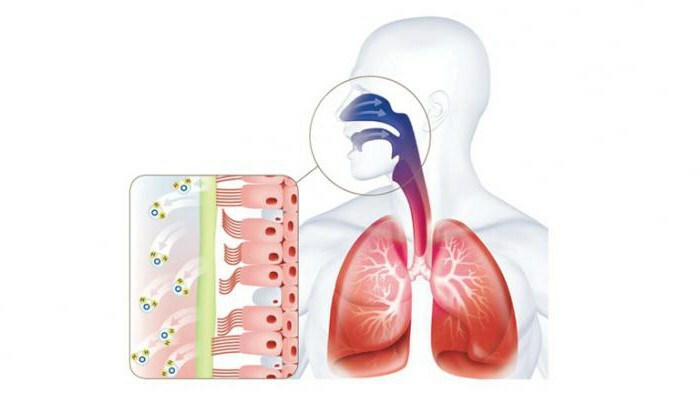 In this article we will consider what the process is, what it depends on and how it is explored. But first you need to figure out how the ejected mucus enters the person's respiratory system.

What is the essence of this phenomenon?

Every day more than 15 thousand liters of air fall into our lungs( this volume is enough to fill about 1,600 balls).And even in the cleanest, untouched human environment, we still inhale about a hundred bacteria every minute, which is more than 150 thousand pollutants a day. If given to them, then they are able to infect and clog all of our respiratory system.

But these alien particles of viruses and bacteria get into an extremely sticky mucous layer of the airways. Which carries the captured unfavorable material into the larynx. This process is also known as mucociliary clearance. Until now, scientists have not yet fully understood his physiology, so research continues. Let's look at this process more carefully.

So, mucociliary clearance is what?

How does the airway cleaning process work?

The process of transporting mucus to clean the respiratory tract from foreign particles is controlled by the ciliary apparatus of the bronchi. Cilia are small tentacular structures, with a diameter of about 1,000 times smaller than human hair. They wriggle in an asymmetrical rhythm.

By scanning the images of the electron microscope, it was found that these structures protrude from most epithelial cells that line the airways tightly. They bathe in a watery liquid - the periciliary layer.

During the impact, the cilia are straightened and plunged into the mucus by their apexes, after which they push it along with the foreign particles adhering to it. These structures, as a rule, form a unidirectional movement of the mucus by coordinated movement.

The cilia of the ciliated cell have a two-phase movement: first a rapid effective impact occurs, followed by a slow, recurrent movement. The exact mechanism by which slime is provided is unclear until the end, and is today the subject of intensive research.

What determines the direction of movement of mucus?

The direction of movement of the cilia of the mucosal layer is excellent in different parts of the respiratory tract: 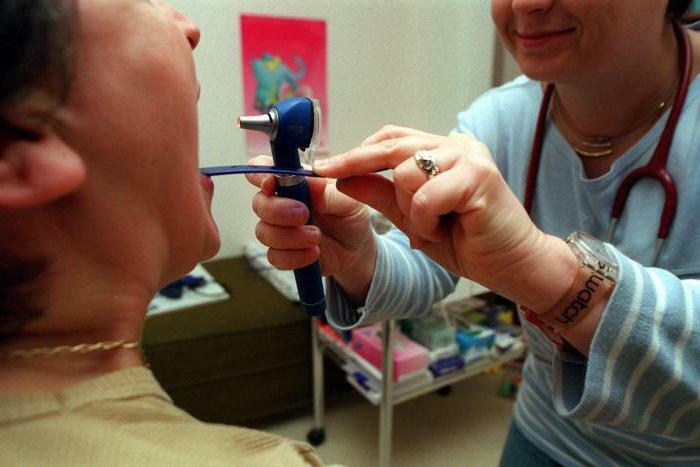 What is the epithelium of the respiratory tract?

The tissue covering the respiratory tract is a multifilament ciliated epithelium. It consists of ciliated( 80%), goblet, producing mucus, as well as undifferentiated cells. As a rule, all these cells must be updated every month.

Each ciliate on its surface contains about 200 cilia of very small dimensions( 0.2 μs in thickness and 5-7 μm in length).But despite such small sizes, the cilia are able to move the mucous layer at a speed of up to 0.5 mm / sec.

For the first time the structure of cilia was characterized by Fossett and Porter in 1954 due to observations in an electron microscope. As it turned out, the named entities are the outgrowths of the cell. In their central part is an axonom, which consists of 9 doublets of microtubules. And in its center there are two additional microtubules( 9 + 2).Throughout the length of the microtubules, there are internal and external dyneinic handles necessary to convert ATP into mechanical energy.

A key role in the clearance of

A key role in mucociliary clearance is not only the coordinated work of the cilia, but also their beat frequency( CBD).According to some data, it is 3-15.5 Hz in an adult, and in children of PBS is 9 to 15 Hz.

However, some authors say that this indicator does not depend on age. Just the CBD in the peripheral respiratory tract is lower than, for example, in the trachea, nasal cavity and bronchi. To slow the cilia may cause a drop in temperature. During the experiments, scientists found that the cilia moved as actively as possible at a temperature of 37 ° C.

What can cause the violation?

Mucociliary clearance disorders may occur as a result of damage to the mucosal protection mechanism of the respiratory tract. These include, as inborn( primary ciliary dyskinesia), and acquired disorders( against the background of infection).Such damage can cause a complete stop of the movement of cilia or a decrease in CBD.

To date, to study the status of mucociliary clearance( which we have already explained) can be various methods. These include:

Soskob from the mucous membranes also allows you to directly study the motor activity of the ciliated epithelium.

The simplest specimen of the ciliated epithelium can be obtained from the nasal mucosa. The material can be taken with a cytological brush, but it is more convenient to scrape a special disposable plastic spoon. The advantage of this method is non-traumatism, as well as the possibility to get the material from a specific area without anesthesia.

The state of ciliary epithelial functions is evaluated by the following algorithm:

Saccharin test is sometimes performed. For this, the tablet of food saccharin must be divided into four parts and given to the pieces in a round shape. One piece of saccharin is placed on the lower nasal shell with an indentation in cm from the front end. After this, it is necessary to detect the time before the occurrence of a sweet sensation in the mouth. The time from 10 to 15 minutes is considered the norm. 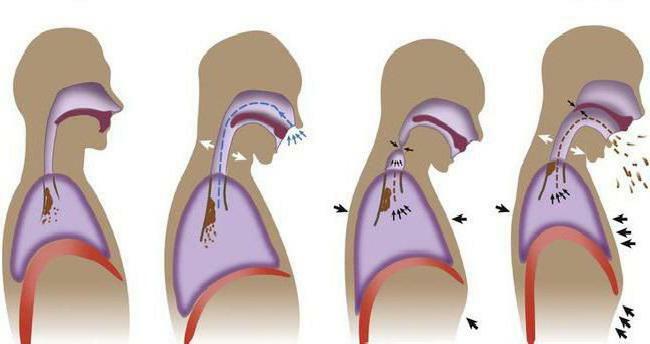 Lately a lot of attention has been paid to the raioaerosol method of research. It allows using a special gamma camera to monitor the spread and removal of a radio-pharmaceutical product, which is previously inhaled.

This method allows to adequately characterize the state of clearance in various parts of the lungs. But it is very difficult to introduce it into practice due to the absence of special laboratories, a specialized inhalation unit, aerosols and trained personnel. All this requires large financial costs. In addition, do not forget that the radiation load is very unfavorable for the human body.

And what is the mucociliary clearance in children? Studies have revealed that in most children with bronchial asthma and allergic rhinitis, saccharine time was normal, and sometimes even accelerated. The average is 6 minutes.

Investigating mucociliary clearance( this phenomenon we described) in patients with bronchopulmonary pathology, it was revealed that the condition of the MCT depends on the presence of bronchial obstruction, as well as on the form of inflammation: acute or chronic.

Thus, the study of the state of clearance allows you to identify the presence and severity of mucociliary failure. In addition, it helps to select adequate treatment, and in conclusion to evaluate the improvement of mucociliary clearance by the chosen therapy.