Angelica is among the plants that grow on the territory of Russia and possess medicinal properties. It is also called: a jaggie, a cow, a spindle, a flywheel or a wolf's pipe. It is associated in people with strength and health. In folk medicine, the roots of Angelica are mainly used. About this plant and talk in the next article. 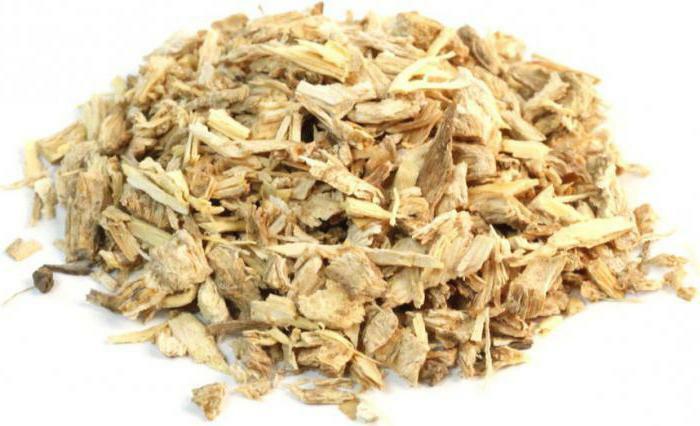 This large grass grows two years, reaching for its life up to two meters high. The stalk of the plant is erect, cylindrical, naked, upward has a bluish coating, and below it is red. Leaves on the underside of a bluish-green color, glabrous, vaginal, regular. Radical leaves are large and triangular, and the stems are smaller, with swollen vaginas.

The plant has small greenish-white flowers that collect at the top into almost spherical umbrellas. And the fruits in the form of flat worms fall into two parts when ripe. To better understand what is at stake, see how Angelica looks. The photo is presented below. 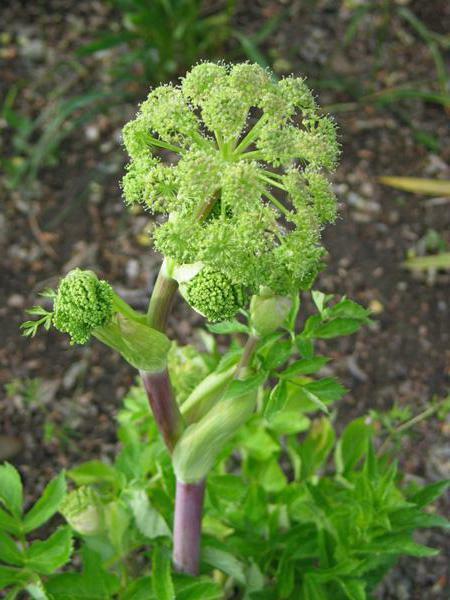 The plant can be found without problems in the European part of Russia, and also in the West of Siberia. His native land is Asia and northern Europe. In the Central part it was imported from Scandinavia in the 14th century. The Angelica plant loves banks of rivers, lakes of brooks, raw ravines and flood meadows.

Thanks to its strong spicy taste and aroma, it is sometimes cultivated and grown in orchards and even in fields. Moreover, it is provided with appropriate conditions: loose, moist and processed fertile soil. Only then will the roots grow well in length.

As noted, the medicinal part is the roots of Angelica. They are collected in the first year of life in the autumn, or in the second year in the spring, before they begin to grow.

If the culture is not cultivated and the wild plant is being harvested, one should be especially careful not to confuse it with another plant, which is very similar in appearance, a forest doe. You can distinguish one from another in the following way: in the medicinal sense of the angelica, the thyroid inflorescence, upward the stem is granite, the fruits are fused with the pericarp and the roots are woody and have an unpleasant odor. Unlike the two-year-old angelica, the forest doe is a perennial plant.

The roots of Angelica are excavated, the parts growing above the ground are cut off, washed in cold water and cut into two parts across. It is dried in a ventilated room or on the street. You can use the stove by setting the temperature to 35-40 degrees and laying out the roots with a thin layer. In natural conditions, with good weather, the raw materials are ready in about a week. As it dries, the root becomes brown or reddish-gray. The taste is sweet at first, and then bitter and bitter. If you bend the angelica, it can be removed for storage. Shelf life is three years. 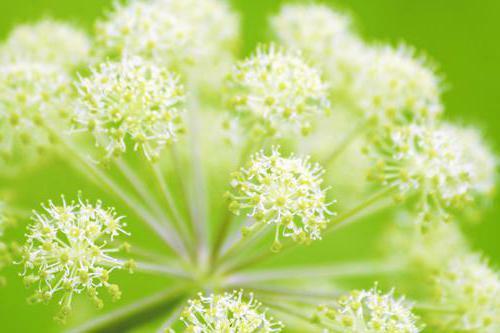 The roots of Angelica contain a lot of ethereal angelic oil, which has a strong and pleasant aroma of musk. It consists of terpene and cymene, as well as a set of acids: malic, methyl-oily, angelic, acetic and valeric. Essential oil is found not only in the roots, but also in the grass, as well as in the seeds.

In addition, the root contains:

Leaves and flowers have quercetin, and fruits, in addition to the essential, contain fatty oil and coumarin derivatives.

Rich composition determines the healing effect of Angelica. It possesses:

Due to this, preparations, which include angelica, contribute to:

Angelica helps in the treatment of: 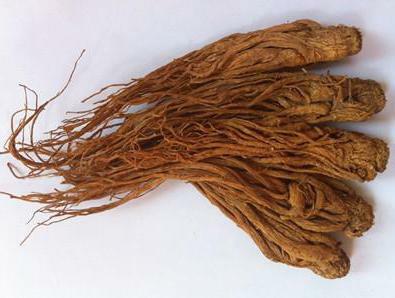 Given such a versatile and strong positive effect, in addition to having angelica root useful properties, and there are contraindications to it. In particular, with an overdose, poisoning occurs, which can lead to paralysis of the nervous system.

In addition, when taking it as a medicine, you should avoid exposure to the sun, otherwise irritation will appear on the skin. Naturally, we can not discount the individual intolerance. Therefore, you should start taking care very carefully, constantly observing your own feelings. It is contraindicated in pregnant women and nursing mothers. 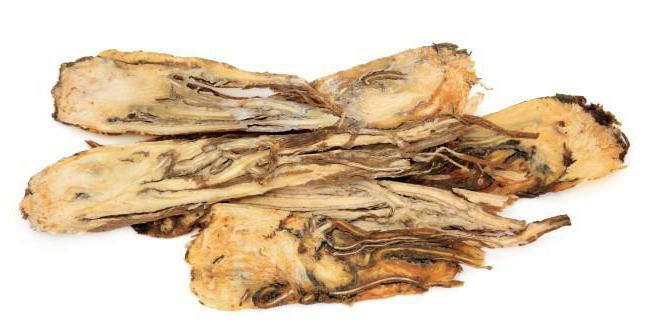 It is known that an essential oil is prepared from a plant. To get 1 g of oil, take 280 to 400 grams of fresh roots or from 100 to 280 grams of them in a dry form. Fresh oil is a yellowish liquid. Over time, it gets dark. The oil has a pleasant sweetish flavor, and cooked from fruits is an even stronger and fragrant product.

Decoctions are prepared in a 1:10 ratio, and infusions - 5:20.They are made from all parts of the plant. In inflammatory processes on the gums, it is useful to rinse the mouth with an extract of Angelica. And infusion, among other things, is taken as an antidote. In addition to internal use, it is used externally. To do this, prepare tincture for alcohol and rub joints for gout, rheumatism, muscle pain and radiculitis.

To fans of medical preparations it is possible to advise capsules "Solgar", the root of which contains angelica. 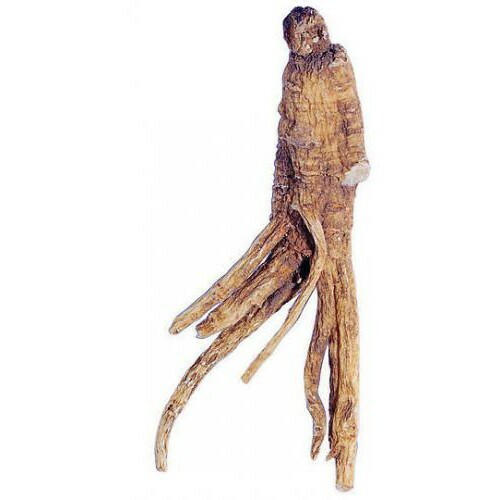 Consider how to prepare medicines and how to take them for various diseases.

If you suffer from depression, insomnia, CNS diseases, this prescription will help. In 150 milliliters of boiling water 20 grams of rhizomes are steamed. The container is clogged and cleaned in a warm dry place for several hours. After that, filter and take 100 ml in the lunch and before going to bed.

Diseases of joints will cure healing baths. For this, 200 grams of roots are added to two liters of boiling water. The container is closed and left to stand for 30 minutes. Then the composition is poured into the bath and take it 20 minutes three times a week.

An excellent remedy for colds is the infusion, cooked in equal proportions with marigolds. For 400 milliliters of boiling water take 30 grams of raw materials and insist with a warm dry place for 5 hours. Strain, take the medicine on 100 ml twice a day.

Purify the kidneys and cure the pyelonephritis will help the seeds of Angelica. In half a liter of water, add 15 grams of seeds, filter and drink 100 milliliters every two hours.

For the treatment of bronchitis, 20 grams of roots are poured with 300 milliliters of cold water, boiled and left to languish for a quarter of an hour. Then the contents are filtered and taken at 60 milliliters four times a day.

With radiculitis or arthritis, the following prescription will help.60 grams of dry raw materials are ground and filled with a glass of vodka or alcohol. The container is tightly sealed and removed to a dark place for fourteen days. It should be shaken regularly. At the end of the time, the contents are filtered and poured into a container with a darkened glass. The facility rubs the sore spots and makes compresses.

And here is the prescription that promotes treatment for cholelithiasis. Pre-crush the raw materials, place it in a coffee grinder and bring it to a powdery consistency.10 grams of Angelica pour 300 milliliters of water, stir until the powder dissolves, leave for half an hour and drink 20 ml twice a day after meals.

Useful action for jaundice or pancreatitis is the juice of Angelica. He is squeezed out of fresh raw materials and drinks one small spoon four times a day for three weeks.

The duration of therapy for any disease should not exceed a month. If necessary, repeat the treatment after a month.

Separately, it should be said how useful is the angelica root for women. It helps with almost all gynecological problems, including infertility. For example, to normalize the menstrual cycle, you need to brew 20 grams of grass in 400 milliliters of boiling water and leave for 4 hours. The infusion is divided into two parts and drunk during the day. The course is 1 month. 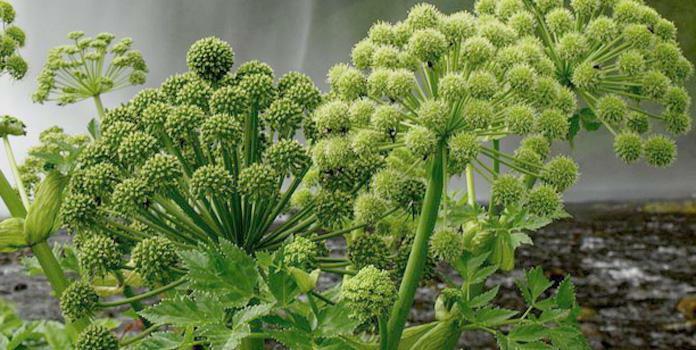 Here is the therapeutic effect of angelica. The photo shows how it happens. But do not forget that the plant is easily confused with the woods. It is also advisable to consult a doctor and a herbalist before starting the procedure.