Bronchiectasis - what is it? Bronchoectasis of the lungs

In modern medicine, cases of a pathology called "bronchiectasis" are often recorded. This is a dangerous condition that develops against the background of various diseases of the respiratory system. Of course, patients who are confronted with this diagnosis, are looking for any information about the dangers, symptoms and methods of treatment of the disease.

Bronchiectasis - what is it? 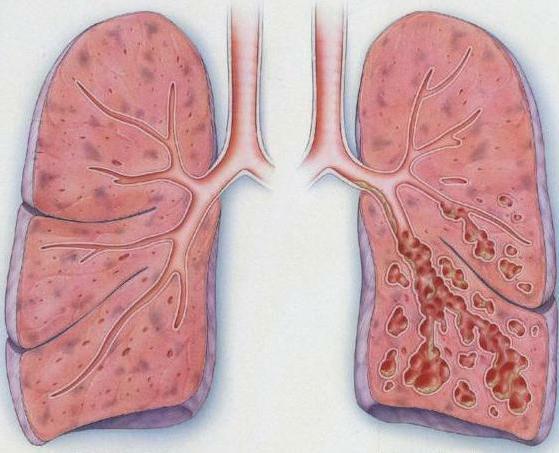 Many diseases of the respiratory system are associated with this pathology. What do patients who are confronted with a diagnosis of bronchiectasis? This condition is accompanied by a strong expansion of the bronchi sites as a result of damage to the bronchial wall.

The disease can affect different areas of the bronchi, but most often the expansion of the walls of bronchioles of medium size. The process is associated with loss of tissue elasticity. According to statistics, in men, this pathology is registered approximately 3 times more often than in women of the opposite sex. From the disease often suffers from the left lung, but bronchiectasis of the right lung is less common. Specialists attribute this statistic to the fact that the lumen of the left bronchus is much smaller and forms a physiological constriction at the site of inflection of the pulmonary artery.

Unfortunately, bronchiectasis can rarely be completely eliminated, but with the help of correctly selected methods of treatment it is possible to stop the process of destruction of bronchial walls. 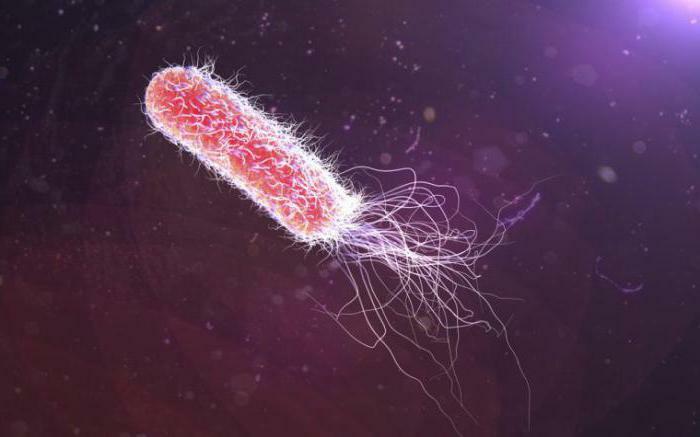 development Bronchiectasis can be both congenital and acquired. There is a question of congenital pathology, it is usually associated with the presence of genetic and physiological abnormalities. Expansion of bronchi is often observed in children suffering from cystic fibrosis and immunodeficiency conditions, as well as a number of other diseases, including the syndrome of Jung, Marfan, Kartagener.

Acquired chronic bronchiectasis often develops against the background of respiratory system diseases, including pneumonia, tuberculosis, whooping cough. The risk factors include allergic diseases. Pathology can be associated with the presence of bronchial tumors, which make it difficult for air and sputum to pass through. To the list of causes include diseases of the immune system, including AIDS.

Not always bronchiectasis is associated with pathologies of the respiratory tract itself. Expansion of the bronchial wall can be the result of progressive ulcerative colitis, rheumatoid arthritis, Crohn's disease, staphylococcal infection, regardless of location, hiatus hernia in the diaphragm. Risk factors include bad habits( alcoholism, smoking, use of narcotic drugs), poisoning with dangerous toxic gases.

It is very important for a doctor to determine the cause of pathological changes in the bronchi, because in many respects the success of therapy depends on this.

The main symptoms of bronchiectasis 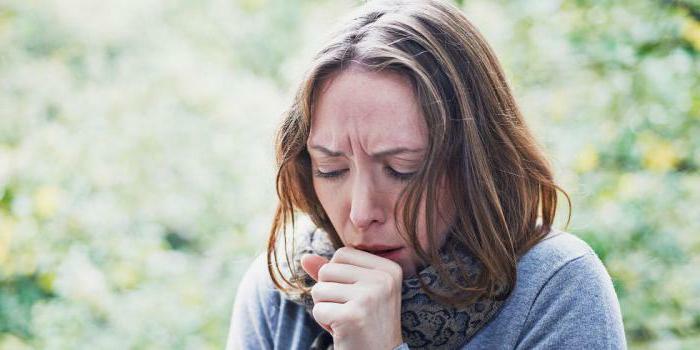 Bronchiectasis is a pathology that develops gradually. At the initial stages, some characteristic symptoms may be absent altogether. Patients very often suffer from respiratory system diseases, including pneumonia and pleurisy. Bronchitis with bronchiectasis is also a frequent phenomenon.

In addition, there is an increase in sputum production, especially in cold wet weather. It is often possible to notice wheezing on inhaling and exhaling.

As the disease progresses, patients note the appearance of a cough - seizures are especially strong in the morning and are accompanied by the release of a large amount of mucopurulent sputum. Discharges often have an unpleasant odor.

Changes in bronchial walls affect the amount of oxygen produced by the body. Hypoxia is accompanied by a general weakening - patients complain of constant weakness, drowsiness, frequent dizziness. The patient's skin is pale, sometimes becomes bluish. Symptoms include shortness of breath, which at later stages of development becomes permanent and worries a person not only during physical activity, but also at rest.

Stages of development of the disease 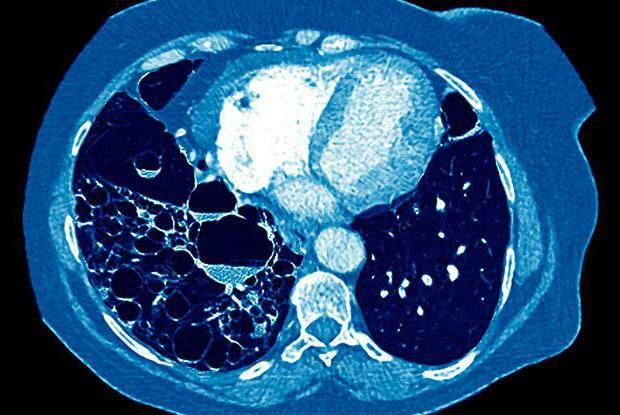 Physicians distinguish three stages of the development of the disease: 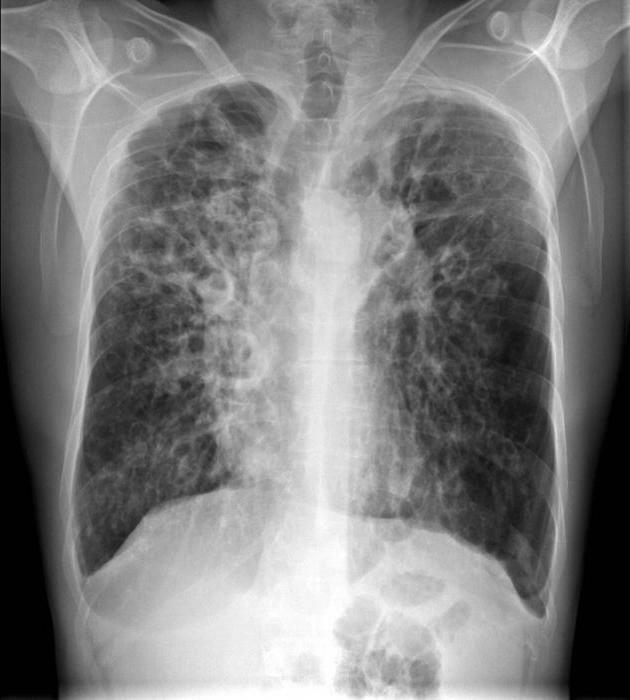 There are several classification schemes for this pathology. As already mentioned, bronchiectasis can be congenital or acquired. The destructive process sometimes covers only a small part of the bronchi, but it can also spread to other parts of the respiratory tract( in this case we are talking about a large bronchiectasis).Perhaps the emergence of several lesions in different parts of the bronchi.

Depending on the degree of manifestation of symptoms, a mild, moderate and severe form of pathology is distinguished. Depending on the pathomorphology, bronchiectasis can be hypertrophic or atrophic.

It should be noted that in the absence of treatment, an ailment can lead to dangerous consequences, including emphysema, extensive bleeding, secondary amyloidosis, respiratory and heart failure. 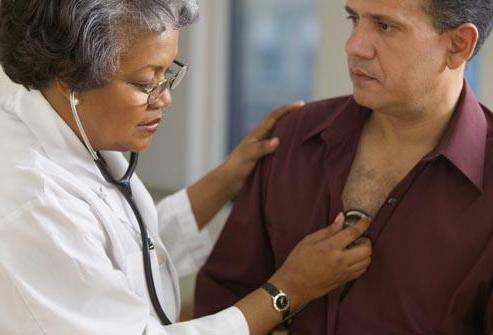 Diagnosis of this disease is a long process. During a routine physical examination, the doctor may notice some changes in the appearance of the patient - the thorax resembles a barrel in shape, the phalanges of the fingers are changed( if it is a question of later stages of the development of the disease).When auscultative examination specialist notes hard breathing and the presence of wet rales.

With regard to laboratory diagnosis, the patient is first assigned a blood test. On the background of bronchiectasis there is an increase in the rate of erythrocyte sedimentation, an increase in the number of leukocytes and anemia, which is associated with oxygen starvation of the body. In a laboratory study of sputum, it can be seen that the secretions have a three-layer structure.

Various instrumental methods are used to establish the final diagnosis. Informative is the radiography of the chest, which makes it possible to see the areas of fibrosis, confirm the presence of cysts and bronchial extensions, determine the change in the vascular pattern. In addition, bronchoscopy is performed( internal examination of the bronchi with an endoscope), as well as computed tomography.

Conservative treatment largely depends on the stage of the disease. As a rule, patients are prescribed medication for dilution of sputum. Widely used immunomodulators, multivitamin complexes. In the presence of pneumonia and other bacterial diseases, patients need antibiotics - most often macrolides( "Azithromycin") and pneumotrophic fluoroquinolones( "Moxifloxacin", "Levofloxacin") are used.

An important part of therapy is the sanitation of the bronchi, because one should not allow sputum stagnation in the lungs - patients are given periodic sessions of vibrating massage. To facilitate the allocation of sputum will help and properly selected complex of physical therapy. Treatment of bronchiectasis necessarily involves respiratory gymnastics. When the lumen of the respiratory tract is clogged by purulent masses, microdrainage is performed using antibiotics and antiseptic agents. Sometimes mucolytics and proteolytic enzymes are introduced into the lumen of the bronchus, which dilute sputum and facilitate its departure.

This is the way bronchiectasis is treated. The doctors' comments indicate that with properly conducted therapy, it is possible to restore the relatively normal operation of the respiratory system.

Surgery and its features 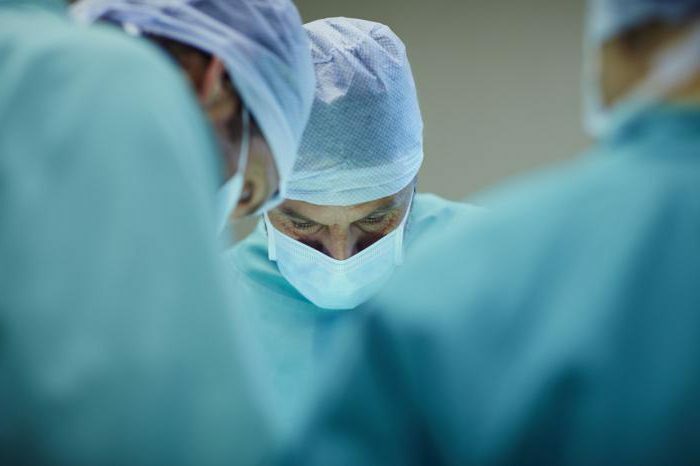 Far from always conservative methods of treatment help to cope with such pathology as bronchiectasis. Sometimes an operation is just necessary. Depending on the extent of the lesion, the doctor may recommend complete removal of the lung or partial resection of the affected areas of the bronchi.

Surgical treatment for a similar disease is rather complicated, after which the patient needs a long rehabilitation.

Treatment of bronchiectasis necessarily includes a proper diet. The diet should include a large amount of protein food, but the amount of fat is recommended to be reduced to 90 g per day.

The menu should contain more products rich in vitamins of group B and A, as well as ascorbic acid. Patients are advised to eat plenty of raw vegetables and fruits, drink fresh juices. The menu should include the liver. For drinking use broths of wheat bran and dog rose.

Unfortunately, there are no medications that can prevent the development of the disease. But you need to understand that bronchiectasis is a serious pathology, the development of which is easier to prevent. Patients at risk are advised to give up harmful habits( in particular, smoking), monitor diet, strengthen the immune system and make preventive vaccinations against viral infections, including whooping cough, flu, measles and others.

Patients who have already been treated should be registered with a doctor, undergo examinations and take tests three times a year. People with existing bronchiectasis during the period of remission need periodic sanation of the bronchi, physiotherapy procedures, preventive sanatorium treatment.