Angiosclerosis of the retina - what is it? What is dangerous for hypertension?

Eye ailments are quite dangerous for a person, as they can provoke a complete loss of vision. To avoid such complications, experts recommend that you pay special attention to this organ, paying attention to the slightest modifications. Therefore, it is necessary to know the symptoms and immediate causes of retinal angiosclerosis.

Retinal angiosclerosis - what is it? 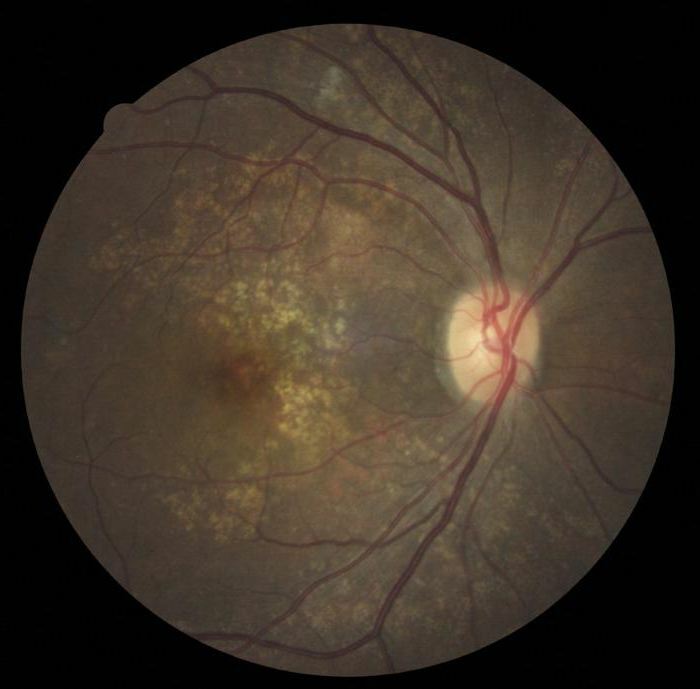 What is this ailment and how it can affect the eyesight directly, most patients care. Specialists note that retinal angiosclerosis develops against a background of hypertension. The main result of the disease is the modification of the fundus and the disorder of functionality in general. Consequently, depending on the extent of the lesion, retinal angiosclerosis will be different. In the process of deformation of the vessels of the fundus, the arteries acquire a varied thickness and a curved appearance. Sometimes there is a process of blockage of blood vessels. What is characteristic, this stage of the disease is complemented by the symptoms of the Salus-Gunn. The immediate consequences of the development of the disease can be:

disease Angiosclerosis of the retina is an exacerbation of hypertension. At the initial periods in patients with high blood pressure, angiopathy of the retina arises, which manifests itself in the direct modification of the eye vessels. As a rule, due to the variability, the vessels become bent and lose their flexibility. 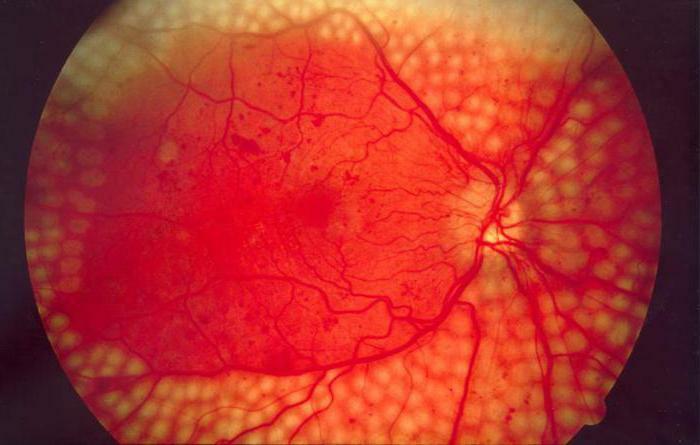 Specialists note that retinal angiosclerosis is the second stage of angiopathy. Progression of the disease leads to a holistic thrombosis of the vessels and structured modifications of the mesh shell.

Retinal angiosclerosis without proper treatment can cause blindness. 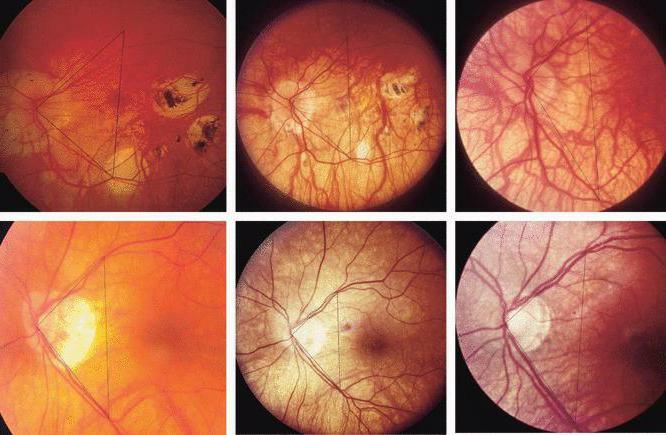 Hypertonic angiopathy is the initial stage in the formation of hypertension. The immediate signs are vascular disorders and pressure fluctuations. The initial stage, as a rule, does not affect the vessels. But with their stay for a long time in an expanded form, begins hyperemia of the fundus. As experts note, this provokes the artery compression.

The second stage of the development of the disease

Hypertensive angiosclerosis of the retina is the next stage in the modification of the fundus. As a rule, the following modifications are observed in this period of the disease development:

As experts note, sometimes arterial vessels become thinner so that they become threadlike.

Such changes may trigger thrombosis, aneurysm and bleeding. Sometimes the optic nerves are also subject to modifications. 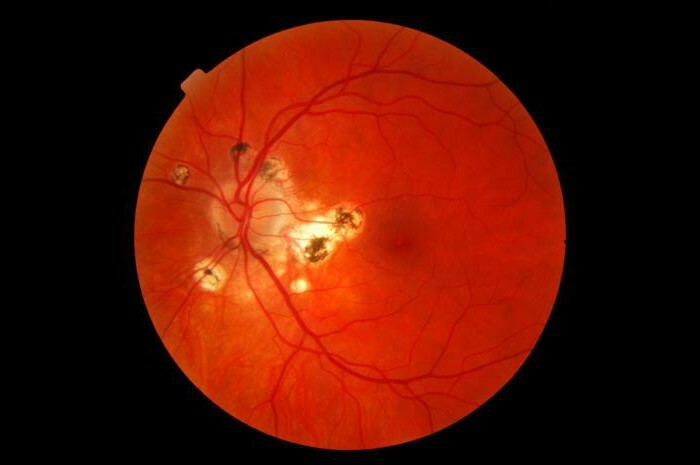 It should also be noted that angiosclerosis of the retina is diagnosed by the presence of Salus-Gunn signs. Characteristically, there are 12 of these symptoms, but physicians are guided by the three main ones. They include the following manifestations:

These kinds of modifications should be treated by complex therapy under the supervision of an ophthalmologist and therapist. First of all, medical drugs are used to reduce blood pressure.

Angioretinopathy and neuro-retinopathy are the next stages in the development of the disease. At this stage of the development of the disease, an increased permeability of the vessels is noted, which contributes to the occurrence of hemorrhages, swelling and whitish foci. At this stage of progression retinal vessels are retracted. As experts mark, the bleeding can be shown in the form of petechiae or strokes.

Strokes indicate direct injury to large networks of the main artery of the retina and aggravation of the general condition of the patient. White foci in the area of ​​the yellow ring provokes a weakening of vision.

As evidenced by the feedback of specialists, the manifested angiosclerosis of the retina of both eyes at the stage of neuroretinopathy speaks of an unfavorable prognosis both for the eyesight and for the life of the patient. First of all, a specialist should correctly diagnose retinal angiosclerosis. Treatment of this disease can not be done independently. Since an accurately diagnosed and correctly selected treatment will help to avoid complications of the disease. 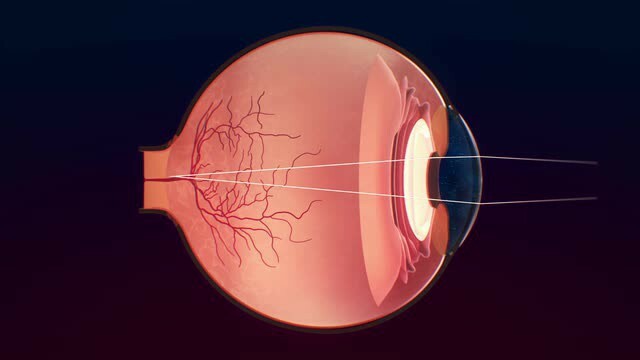 Therapy, as a rule, involves reducing blood pressure. It is also possible to use medicines that contribute to:

If the treatments used do not bring the desired result, then laser coagulation can be used.

Cause of diagnosis of angiosclerosis in newborns

A disease of this kind in toddlers can be triggered by the resulting trauma at the time of birth. During childbirth, intracranial pressure in a baby can increase, which provokes swelling of the optic nerve and leads to a disorder of blood circulation in the vessels.

Specialists note that this pathology is rare and does not require special treatment.

To prevent the development of such an eye disease, experts recommend not neglecting the main preventive measures. The following requirements apply: 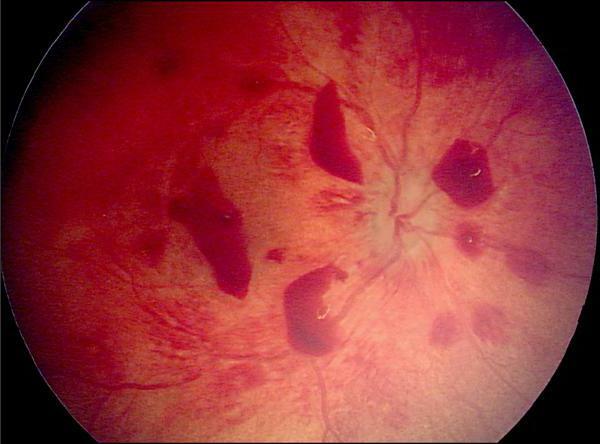 Also for the prevention of disease can be used a variety of methods of non-traditional therapy. In order not to cause harm to the body and not to provoke the aggravation of the disease, all manipulations should be coordinated with a specialist. Only a doctor diagnoses retinal angiosclerosis. What this is and what complications can arise with improper treatment, we disassembled the proposed article.