Hemosiderosis of the lung: manifestation and treatment

Hemosiderosis of the lungs is a very serious disease. It occurs when a massive ingress of erythrocytes into the tissue of the human lung. At the same time, the development of the pigment hemosiderin containing iron continues for a long time. What is hemosiderosis?

Diagnosis of this disease can only be based on an X-ray, however, there are many symptoms by which its presence can be assumed. Distinguishing signs that the patient hemosidericosis of the lungs is a strong cough, up to blood spitting, shortness of breath, bleeding in the lungs. There may be fever and tachycardia. 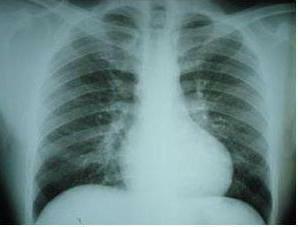 Based on an X-ray of the lungs, the doctor can make a final diagnosis. Other studies are also being conducted to confirm that the patient suffers from this disease. This study of sputum, a biochemical blood test, in difficult cases - a lung biopsy.

Treatment of the disease is done using corticosteroids and drugs that eliminate specific symptoms.

Manifestation of the disease

Idiopathic hemosiderosis of the lung is also called the Celena-Gellerstedt syndrome. This is a pathological problem that manifests itself as a result of the deposition of a special pigment hemosiderin in the human lungs. The main feature of this pigment is that it consists of iron oxide. He is responsible for storing iron in the body. During various diseases, it accumulates in the tissues, which leads to problems of the patient's health. It can also accumulate in human organs. 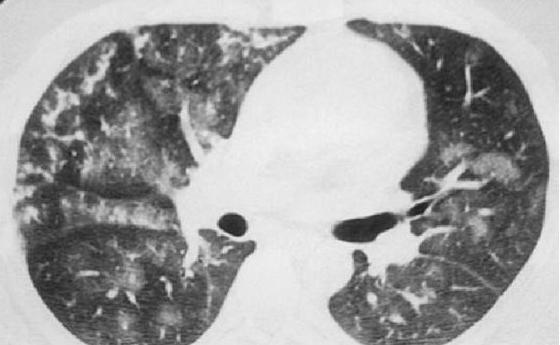 At its core, hemosiderin is a form that stores iron in the body. Because of this, the fabrics have a pronounced rusty hue. When a person develops idiopathic hemosiderosis of the lungs, up to five grams of iron can accumulate in the tissues of this organ.

By itself, the accumulation of iron does not necessarily affect the functioning of the main elements of the organ, in this case the lung. However, if hemosiderosis of the lungs is accompanied by sclerosis, then functional disorders in the body's work are inevitable.

Young children and adolescents are at risk of patients exposed to this disease. Most often female.

The hemosiderosis of the lung can be manifested in humans for various reasons. The most common is a congenital defect in the walls of small blood vessels. Because of this, the body is depleted of capillaries and a temporary cessation of blood flow. As a result, erythrocytes sweat, and in pulmonary tissues, frequent pulmonary microblood eruptions occur. 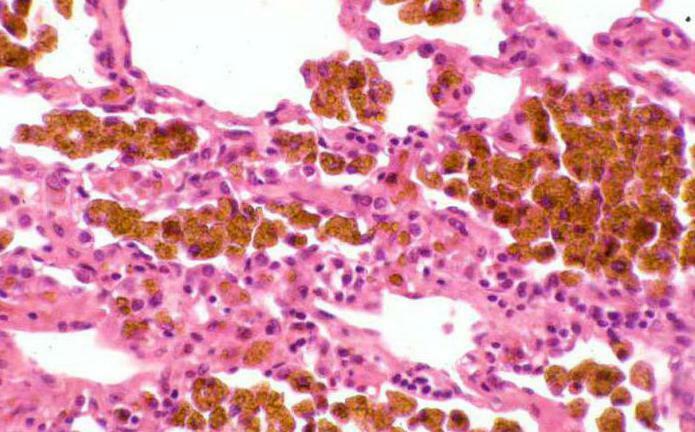 As a result, iron is released and falls into the composition of hemosiderin. It, in turn, is absorbed by alveolar macrophages and deposited in epithelium and endothelial cells in large excess. Also, the fatal role played by another birth defect. Incomplete connection of two organs, in this case - bronchial arteries and veins of the lung.

Immunoallergic nature of the disease

Causes and morphogenesis of hemosiderosis of the lung can also be immunoallergic. In this case, immune complexes cause a major damage to the walls of the pulmonary capillaries. There is a violation of their normal functioning, through damaged vessels in the lungs in excess iron gets, as a result, the body is seriously disturbed. 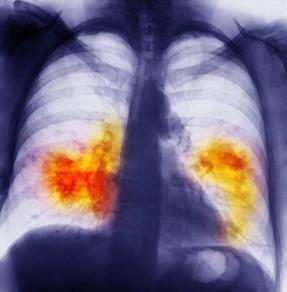 At the initial stage, hemosiderosis of the lungs in children can arise as an idiopathic disease, not related to other problems. And it can be accompanied by a Heiner syndrome( in the event that the body is too sensitive to proteins contained in natural cow's milk).

If hemosiderosis occurs repeatedly, pulmonary microbial bleeding can lead to high blood pressure, which can become a chronic problem.

This disease can also be accompanied by Goodpasture's syndrome. This defeat of the alveoli of the lungs and kidneys, accompanied by their scarring. This disease, as a rule, affects men aged 20 to 30 years. There is an opinion about his hereditary nature.

Idiopathic hemosiderosis of the lungs in children is often provoked by infectious diseases. It can be as easy ORVI, and more serious illness - measles, whooping cough or malaria. It can also be the effects of intoxication of the body. 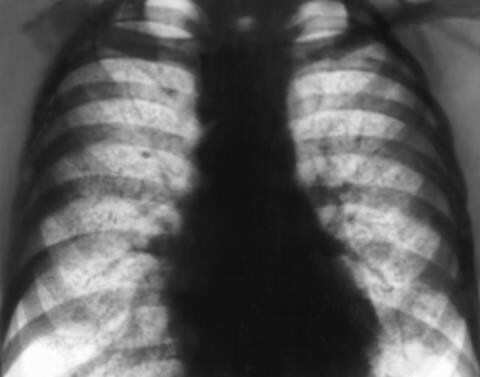 Congestive hemosiderosis develops with chronic heart problems. It can be all kinds of cardiological pathologies - heart defects, cardiosclerosis and other diseases.

The frequent causes of recurrent as well as congestive hemosiderosis are prolonged exposure at low temperatures, strong physical or mental overstrain, and the use of certain medications.

If hemosiderosis occurs within the alveoli of the lungs, then the photographs show a trace of microcirculation, and the places of excessive deposition of hemosiderin are similar to nodules that are located from the center of the lung to its periphery.

Hemosiderosis can occur in several forms. Acute, subacute and recurrent. If this disease manifests itself in children, then most often it occurs even in preschool age, beginning with three years. However, there are patients who were given this diagnosis in the first weeks of life.

The disease manifests with pulmonary hemorrhage and bleeding, a feeling of respiratory failure. 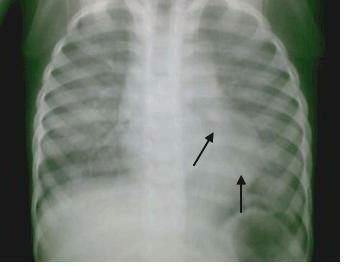 During the occurrence of complications a person has a severe cough with rusty sputum, in severe cases there may be hemoptysis. In young children, the blood can be vomiting.

When examined, doctors pay attention to wheezing, tachycardia, fever, often the patient complains of pain in the chest and in the abdominal cavity, as well as in the joints. There may also be a pathological increase in the liver and a sharp drop in weight.

If hemoptysis lasts a long time, the patient develops anemia, weakness and dizziness. The skin becomes pale, and around the eyes there is a characteristic icterus. The person at the same time quickly becomes tired and constantly hears a noise in the ears. A severe period of the disease can occur from a few hours to 10-15 days. Therefore here you can not do without medication.

During a period of worsening, cough and shortness of breath may decrease, but this should not be very reassuring, it is required to consult a doctor immediately. In the course of remission, complaints can be absent altogether, and a person can lead a full-fledged working life.

With each exacerbation of this disease, the time of remission is reduced, but the severity of the crises increases proportionately. One of the consequences of anemia is the general exhaustion of the body. In rare cases, even the death of a patient is possible - such a sad outcome can happen due to acute pulmonary hemorrhage and severe respiratory failure.

In order to accurately diagnose hemosiderosis of the lungs, an expert opinion of several specialists is necessary. First of all, it is a pulmonologist, a hematologist. And also the study of clinical manifestations of the disease will be required. You can not do without studying X-rays, sputum analysis, blood( both general analysis and biochemical), as well as lung biopsy. 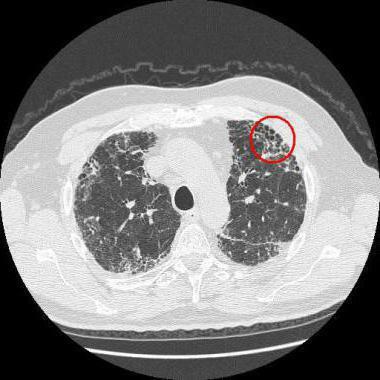 To diagnose this disease is extremely difficult. Often months and even years pass before specialists accurately determine the diagnosis. Sometimes put it only posthumously. The thing is that the first signs are not very specific, like many other diseases, and many simply do not attach importance to them. Usually these are just respiratory diseases accompanied by cough and anemia.

If doctors diagnose idiopathic hemosiderosis of the lung, treatment is necessary. The organism with this problem can not cope. In acute forms, the disease is accompanied by wet rales and palpitations. At the same time, the level of erythrocytes in the blood is lowered, bilirubin is elevated, the level of serum iron in the blood is minimal.

During crises, leukocytosis occurs, the level of ESR increases, which often indicates the course of inflammatory processes. In the late stages of the disease appears polycythemia. This is a benign tumor process, accompanied by hyperplasia of bone marrow cells.

When studying X-rays in the early stages of the disease is characterized by a decrease in the transparency of pulmonary fields. At the same time, intensive darkening and foci of connective tissue with characteristic scars are observed at the third and fourth stages.

New focal shadows often appear, while old ones disappear. On spirography, respiratory failure is noticeable, on the electrocardiogram - myocardiostrophy. A biopsy of the lung helps to make the final diagnosis.

Successful treatment of this disease is possible only with prolonged intake of a course of corticosteroids. For example, "Prednisolone" helps to cure hemosiderosis of the lungs. The drug minimizes vascular permeability and inhibits the development of autoimmune reactions.

If conservative methods of treatment are considered ineffective, then surgical methods are used. The spleen can be completely or partially removed, this can significantly reduce the risk of remission. Also, the probability of crises will decrease, and the life expectancy of a patient after such an operation will increase by 7-10 years.

Drugs in the acute period of the development of the disease

It is noteworthy that in the acute period and during prophylaxis prescribe similar drugs. With the diagnosis of "hemosiderosis of the lungs", treatment can be effectively performed with a combination of cytostatics and plasmapheresis. This allows you to reduce the appearance of new autoantibodies and help the body cope with the old.

Also effective method - the elimination of iron in the urine, for this use the infusion of "Desferal."In the treatment of symptoms, bronchodilators and anticoagulants are used.

Long-term remission for doctors can be achieved if patients follow a strict diet, from which all products based on cow's milk are excluded. If the disease has developed into a chronic stage, nitrate administration is possible. This is especially associated with chronic heart problems.

Doctors distinguish several varieties of this disease. In particular, hemosiderosis of the lungs( macro preparation "Brown lung induction") is characterized. In this case, the lungs increase in size, have an extremely dense consistency. As well as the dark red color, close to the brown, on the section visible whitish interlayers and brownish inclusions.

The hemosiderosis of the lung can also proceed( microsphere No. 111).In this case, noticeable brown pigments inside the cells and beyond, which during the laboratory reaction Perls become blue or greenish. They occur between the bronchi and in the cavities of the alveoli.

In this case, the vessels of the human lung themselves are extremely expanded and full-blooded. The disease is accompanied by heavy hemorrhages in the septum between the alveoli. At the same time, interlayers of connective tissue are found in them.