Pituitary dysfunction is a disease that has been diagnosed more frequently in recent years than before. Representing such problems in general terms is necessary for every person, so that when the first symptoms come to the doctor for detailed diagnosis. It is necessary to understand that diseases associated with impairment of the pituitary gland are dangerous - this is not only a decrease in the quality of life, but also a high probability of various complications.

What are we talking about?

The pituitary gland is irreplaceable for the endocrine system. This term refers to the small size of the gland located in the brain, in its lower half. The gland is located near the saddle skull bones and produces hormones that provide an opportunity for normal life, regulating the growth, metabolism and reproductive ability of a person.

If the hormonal background is disturbed, then it is likely that this condition provoked pituitary disease. Women and men are equally affected, they are exposed to people of different ages, social status, leading a different lifestyle.

Where does trouble come from?

As a rule, the symptom of pituitary disease is the abnormal content of hormones produced by this gland in the blood of a person. Possible as an overabundance, and too little concentration. In any of the options, the entire endocrine system suffers. 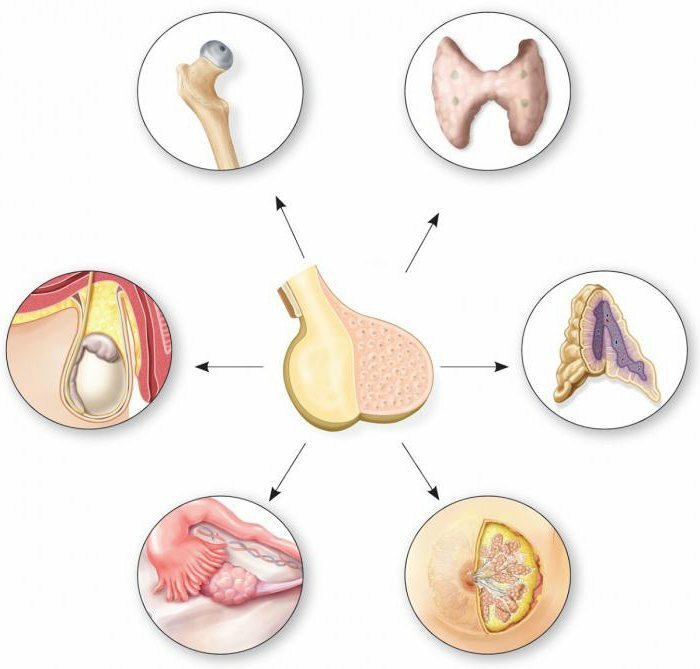 Usually, inadequate production of hormonal compounds is provoked by incorrect blood supply or brain trauma. In a number of cases, diseases associated with the pituitary gland are observed against hemorrhage, inflammation, and problems in the vascular system. This may be a consequence of exposure.

Pituitary diseases, in which the level of activity of the gland is too high, are often associated with a benign neoplasm. This pathology in medicine is called an adenoma. The disease is widespread, its development can cause injuries or infection of the brain. In some cases, adenoma( pituitary disease) develops against the background of long-term oral contraceptives.

How to suspect the

problem Pituitary diseases show themselves with a number of symptom-specific symptoms. In addition, there are manifestations of some other diseases, because of which the diagnosis can be complicated.

So, if the pathology developed before birth, then to notice it quite easily - you see a disproportionate build, unhealthy appearance. If hormonal activity is insufficient, growth slows down, and for a lifetime such a person will be below average. But the excessive activity of the gland leads to gigantism - growth does not stop throughout life.

In case of pituitary disease, some patients grow really large growth, which is accompanied by acromegaly - the limbs increase, the voice coarsens, the posture deteriorates, the internal systems and organs are deformed. 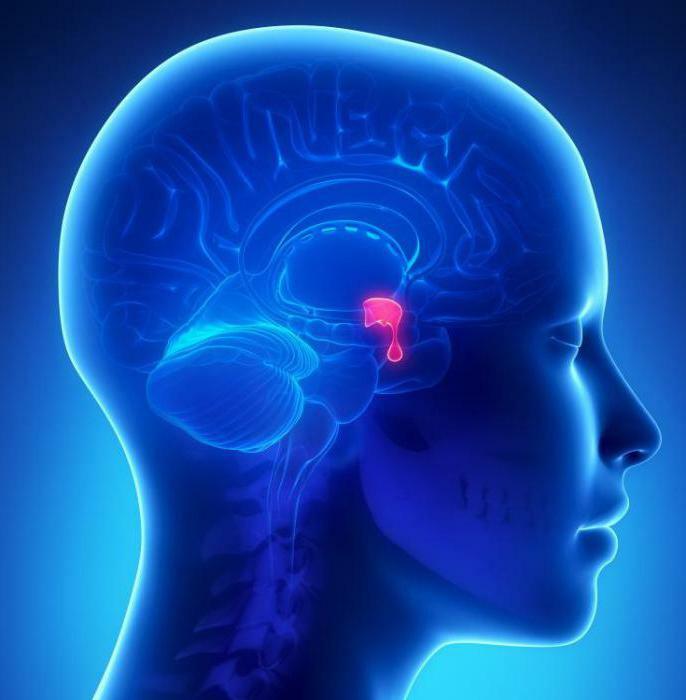 If the pituitary disease is characterized by an incorrect, too weak process of growth hormone production, this leads to disruption in the genitourinary system. When analyzing blood for biochemistry, it is possible to identify the insufficiency of sodium, glucose, somatotropin. There is also an unnatural response to insulin.

What else can happen?

If the lack of hormones develops in a secondary form, patients are diagnosed with hypothyroidism. In some cases, the pituitary gland of the Graves disease. Quite rare, but still there is pituitary dwarfism - this pathology more often affects the male half of humanity than the female one. What is good, modern medicine knows quite effective methods of eliminating pathology.

If the thyroid gland does not produce the necessary amount of hormones for normal life, this causes hypothyroidism. Usually, this is observed when the body is inadequate or when the pathological effect on the processes controlling the hormonal background is poor.

Primary( thyreogenic) hypothyroidism is usually triggered by a lack of iodine in the body. In a number of cases it is caused by mechanical injuries of the thyroid gland provoked by radiation therapy, by surgical intervention, etc.

Secondary hypothyroidism is a disease in which the body lacks the hormones produced by the thyroid gland. In this disorder, the hypothalamus can not generate thyroidibosterin, which affects the pituitary gland - the processes of creating a thyroid-stimulating hormone are stopped.

Tertiary hypothyroidism in modern medicine is often also called central. This form is narrowly distributed and differs in the inability of the thyroid gland to cope with the functions assigned to it. In some cases, this is provoked by the pituitary gland, but sometimes the hypothalamus plays its role. 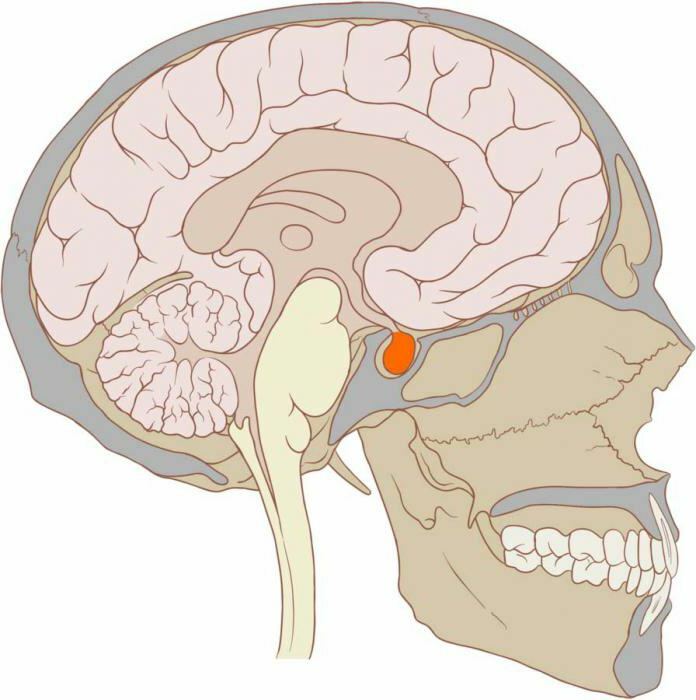 It is difficult to suspect hypothyroidism at the very beginning of the development of the disease, since its course is hidden and has no vivid symptomatology. More often pathology is revealed by the analysis of blood for revealing of features of a hormonal background. In congenital form, the child is observed bloating, umbilical hernia, disproportionate language, thyroid. Over time, the infant loses its appetite, normal development is disrupted, the weight goes beyond the prescribed, the work of the digestive tract is broken - constipations appear.

If you start to treat the disease on time, you can restore the functionality of all body systems to the fullest. Also, the growth process of the child will go into the norm.

When the form is started, the adult pathology can be suspected by the appearance of the patient - the skin on the face is yellowish, the face swells, as the fluid is not eliminated from the body in normal mode. A person feels weak, his hair and eyebrows drop out, his skin dries, his muscles ache.

Usually this is a rather apathetic person who speaks in a hoarse voice and does not hear well enough. Further development of the disease is associated with a violation of the nervous system, which affects memory, ability to concentrate, intellect. There are problems with sleep, the state of the patient is depressed. In the blood, hemoglobin falls, cholesterol rises.

Prolactin is a hormone that normally participates in the formation of the necessary amount of breast milk for a nursing mother. Hyperprolactinaemia can develop in one of three forms. The natural variant is a physiological form, conditioned by birth and growth. Pathological is usually triggered by an adenoma or other internal disorders. With the long-term use of certain groups of medicines, a pharmacological form of the disease may appear. 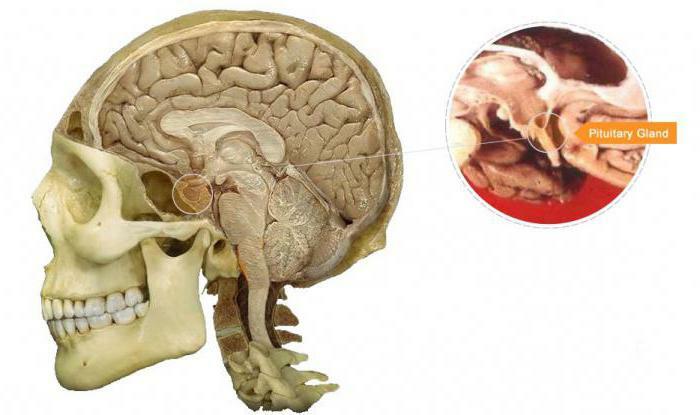 Clinical symptoms may occur in patients of different ages and gender. In this case, women are noted:

There are two types of pituitary adenoma - active and inactive hormone. Usually, the pathology develops rather slowly, the neoplasm has a benign character. Depending on the size, they speak of microscopic, macroadenoma.

At an early stage of development, the adenoma practically does not manifest itself, which considerably complicates the diagnosis. Over time, the tumor provokes the endocrine-exchange syndrome. In this case, the thyroid gland grows in size, there is excess weight, warts. Most patients note that the skin becomes oily. Many diagnose diabetes. Often, adenoma also has symptoms of hypothyroidism, hyperprolactinaemia.

How else to notice an adenoma

The development of an adenoma is associated with an ophthalmological, neurologic syndrome. In this case, the patient's visual field undergoes distortions, and he suffers from headaches. As a rule, vision is greatly reduced, eye movements are observed. Doctors explain this by that, the new formation squeezes the Turkish saddle, cranial nerves. 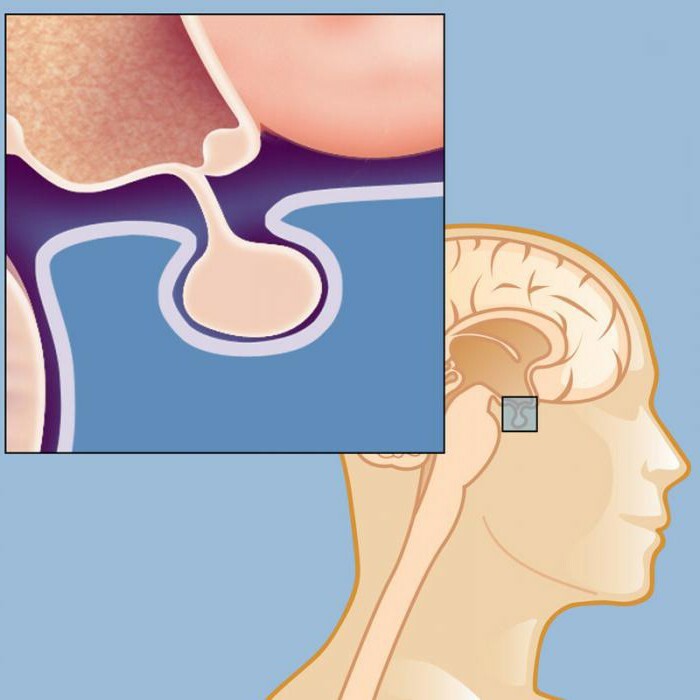 How to identify the disease

If there are symptoms characteristic of adenoma, there is at least the slightest suspicion of this disease, it is necessary to make an appointment with a local therapist who will redirect to the endocrinologist. When using the services of a private clinic, you can immediately go to the endocrinologist for a detailed diagnosis of the body.

The doctor will choose the most applicable instrumental analysis techniques, control the content of hormones in the urine, blood, make an analysis of biochemistry. If there is an assumption that the cause is in nodular hypothyroidism, ultrasound diagnostics is additionally performed.

To determine the type of tumor, it is necessary to undergo computed tomography or MRI.It also allows you to accurately identify the size of the lesion, to understand how much the Turkish saddle has suffered and what the nature of the lesions is. Ophthalmic examination also assesses the condition of the cranial nerves.

Treatment of diseases of the pituitary gland is determined by the specific features of the specific diagnosis. For the beginning it is necessary to choose the preparations, allowing to return to normal the hormonal background. The patient is also prescribed medicines that stimulate the production of the necessary hormones by the internal systems of the body. In addition, they perform general strengthening measures and choose a diet optimal for pathology. 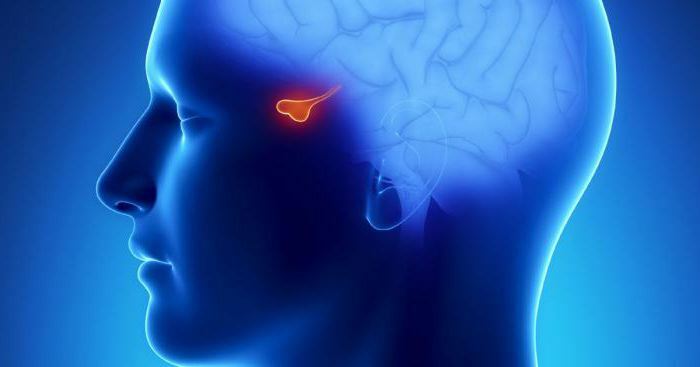 If an adenoma is established, a good result can be provided by radiotherapy, which relieves neoplasm. With macroadenoma, surgical removal of the tumor is possible.

Lack of hormones in the blood must be replenished with external sources, accompanied by mineral components and vitamin therapy. In the treatment of young patients, hormones are administered in minimal doses. With a well-chosen program, the well-being comes to normal soon, the children normalize their growth.